Three of the four men murdered by an ISIS terrorist in a supermarket siege in France last week were honoured at a public funeral attended by hundreds of mourners.

The coffins of Herve Sosna, Christian Medves and Jean Mazieres were put on display in the town square of Trebes, a small town in southern France where the siege took place.

All three were shot or stabbed to death by Radouane Lakdim during his rampage through Carcassonne and Trebes that ended with a shootout at the Super U shop.

The coffins of Arnaud Beltrame, Herve Sosna, and Christian Medves were put on display in the town square of Trebes, a small town in southern France 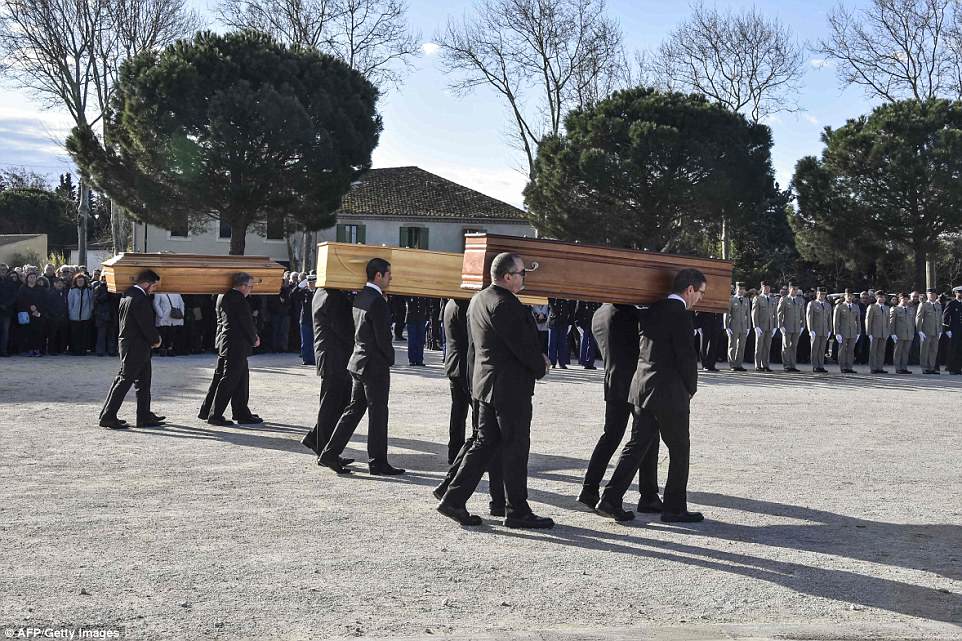 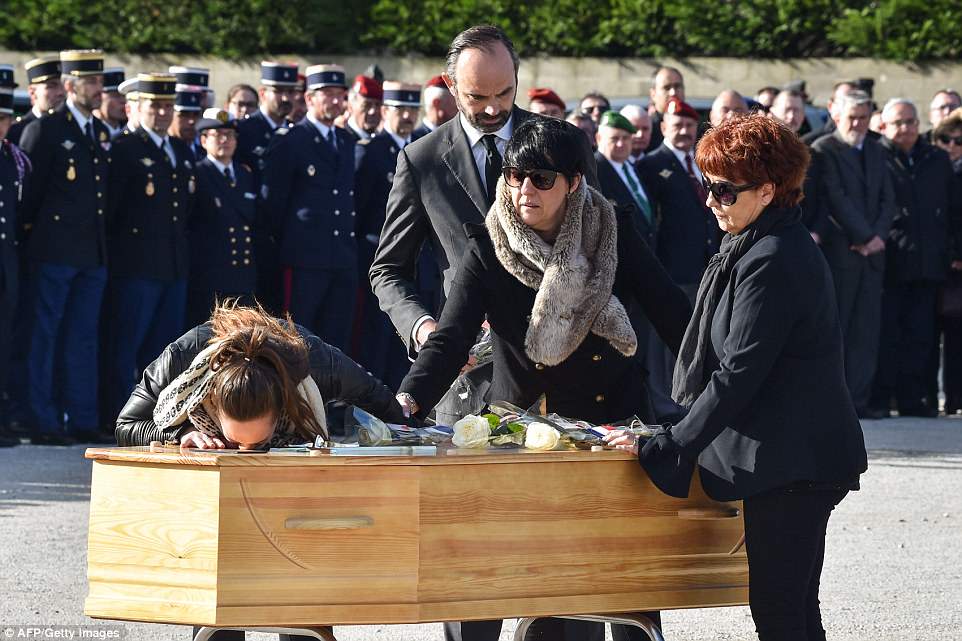 Mr Mazieres, 60, was killed by attacker Redouane Lakdim during the carjacking; Mr Medves, 50, was shot in the supermarket, where he worked as a butcher; and construction worker Mr Sosna, 65, was a customer in the supermarket.

A private religious ceremony took place afterwards for gendarme Arnaud Beltrame in nearby Carcassonne, and it will be followed by a burial later in the cemetery of Ferrals-les-Corbieres.

Yesterday, France held a national homage to Lieutenant Colonel Beltrame, who was given a posthumous Legion of Honor for his heroism in swapping himself for a hostage.

French Prime Minister Edouard Philippe and senior government figures including Interior Minister Gérard Collomb and the Keeper of the Seals Nicole Belloubet attended the service on Thursday morning to pay their respects, speaking to families of the victims and local residents. 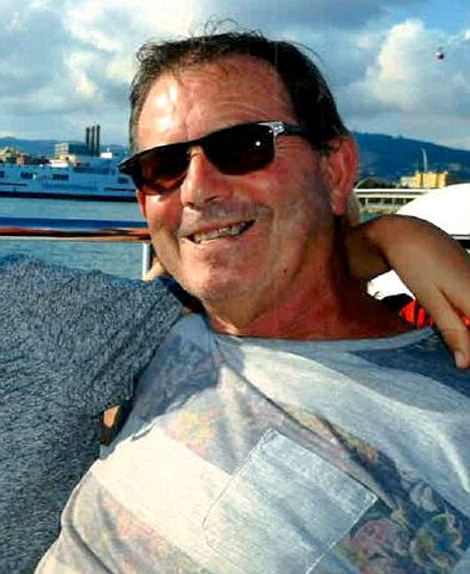 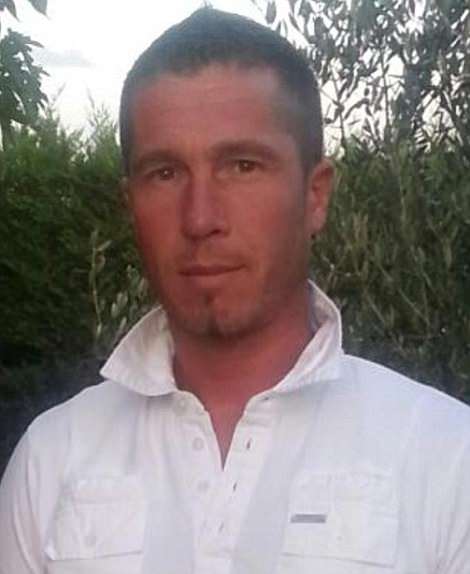 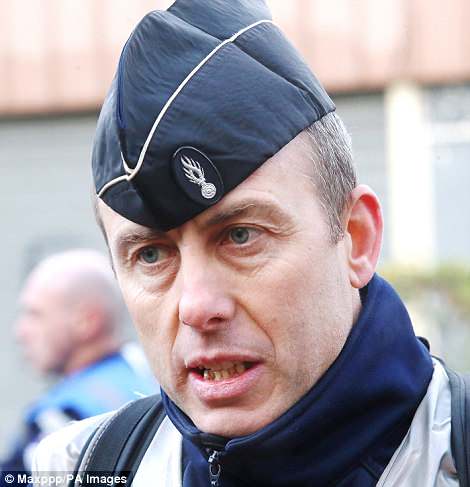 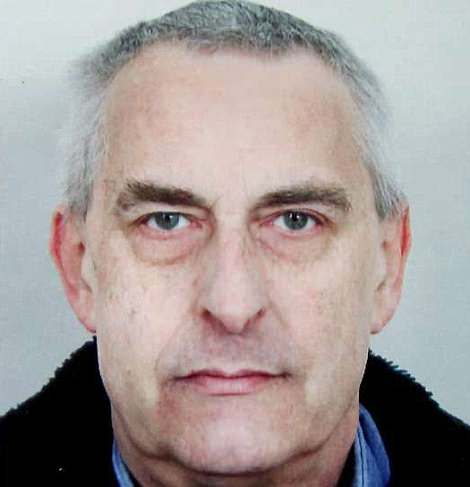 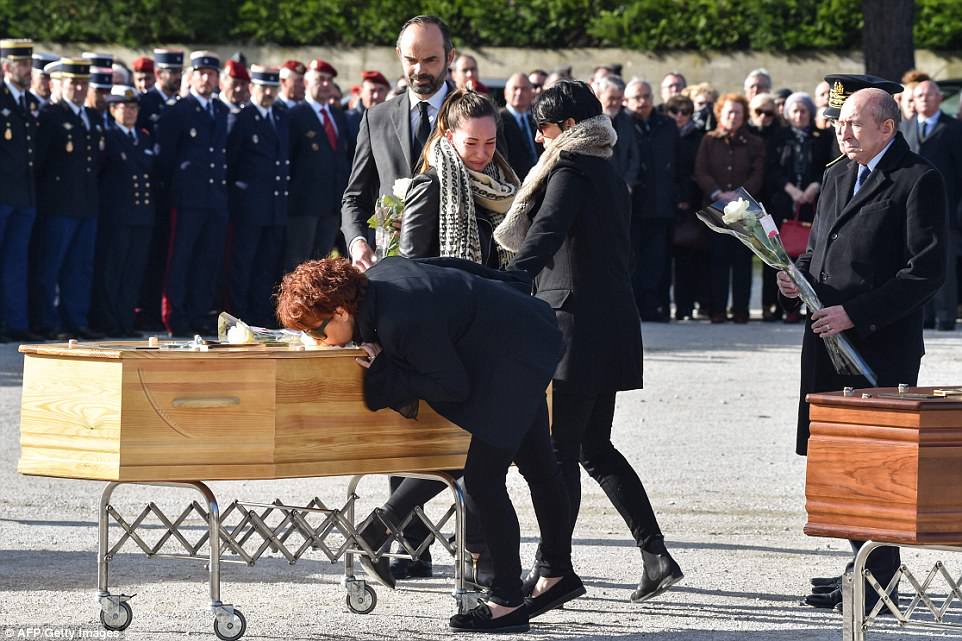 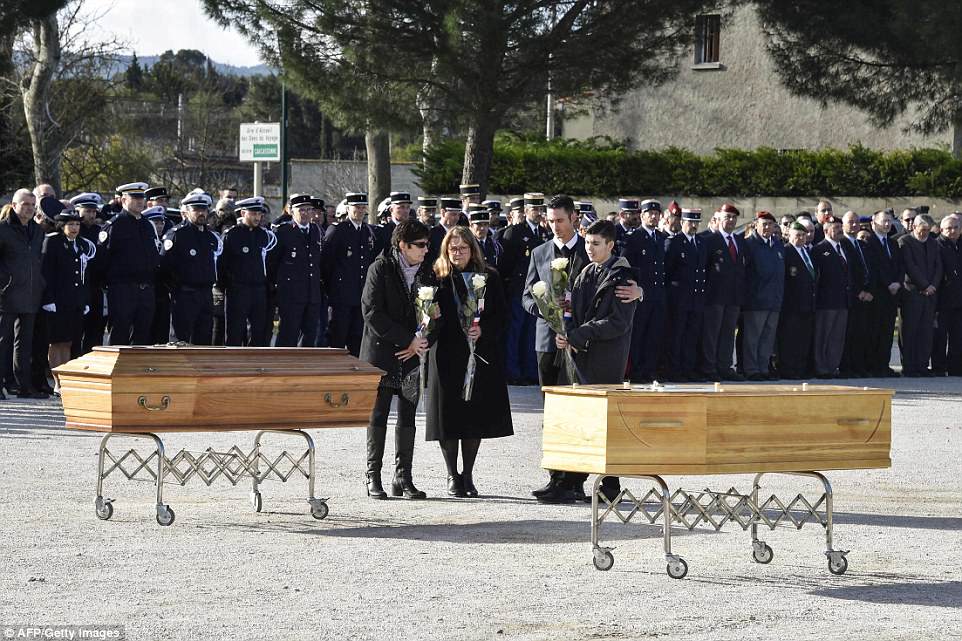 French Prime Minister Edouard Philippe and senior government figures attended the service on Thursday morning to pay their respects, speaking to families of the victims and local residents

Mr Sosna, a 65-year-old retired bricklayer murdered inside the supermarket, will have his funeral first at 10am in the church of Saint-Etienne de Trèbes.

The funeral of retired winemaker Mr Mazières was scheduled at 2.30pm in the church of his nearby village of Villedubert.His wife was worried he might have been at the the Super U when she heard about the siege, not knowing he was already dead.

‘By the end of the morning, she was really worried. She thought he was at the Super U but we did not find him in the list of victims of Trèbes,’ a friend of the family said.

Mr Medves, chief butcher of Super U, will have his funeral two hours later at the church of Trèbes, where he lived with his wife and two daughters.

‘He the happy grandfather of a one-year-old granddaughter and his eldest daughter is expecting her second child,’ Mayor of Trèbes Franck Alberti told La Depeche.

‘He was a hyper bon vivant, extremely attached to his family and friends. For his girls, their dad was their idol,’ his friend Oliver said. 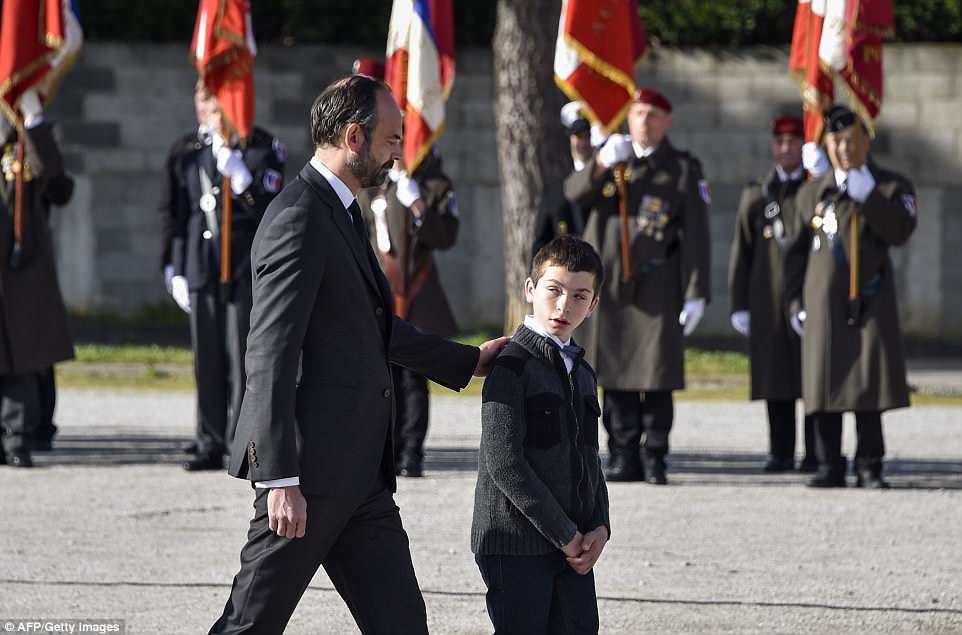 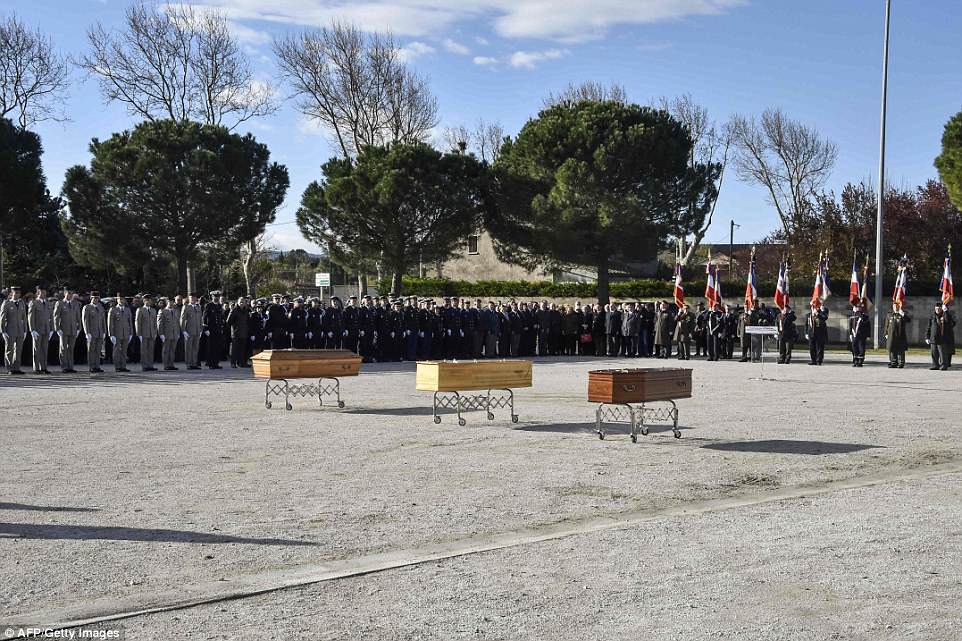 A mass and a vigil in honor of the four victims will take place in the church of St-Etienne de Trèbes at 6.30pm 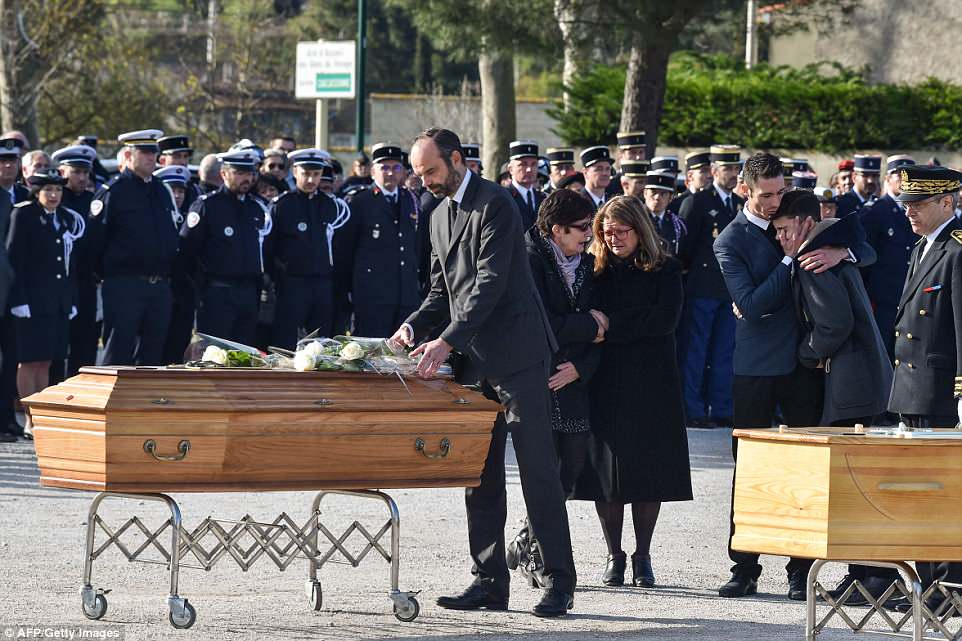 Beltrame will have his private funeral at 11 am in the Cathedral Saint-Michel of Carcassonne, in a mass performed bishop Alain Planet, then be buried in Ferrals, in the Corbières, where he lived with his wife since last summer.

A mass and a vigil in honor of the four victims will also take place in the church of St-Etienne de Trèbes at 6.30pm.

President Emmanuel Macron on Wednesday hailed Beltrame as the symbol of the ‘French spirit of resistance’ at a huge public memorial in Paris.

The 44-year-old’s coffin was carried in a procession from Paris’ Pantheon to a ceremony at Hotel des Invalides, where he was posthumously awarded the Legion of Honor for his bravery.

In his eulogy to the murdered cop, President Macron said: ‘The name of his attacker will be forgotten, but the name of Arnaud Beltrame will live on.’

The French leader vowed to ensure ‘he will not have died in vain,’ ,’ urging the nation to be vigilant in the face of an ‘insidious’ jihadist threat.

‘His example will remain etched in French hearts,’ the president told hundreds gathered in the rain at the historic Hotel des Invalides military museum and hospital in central Paris. 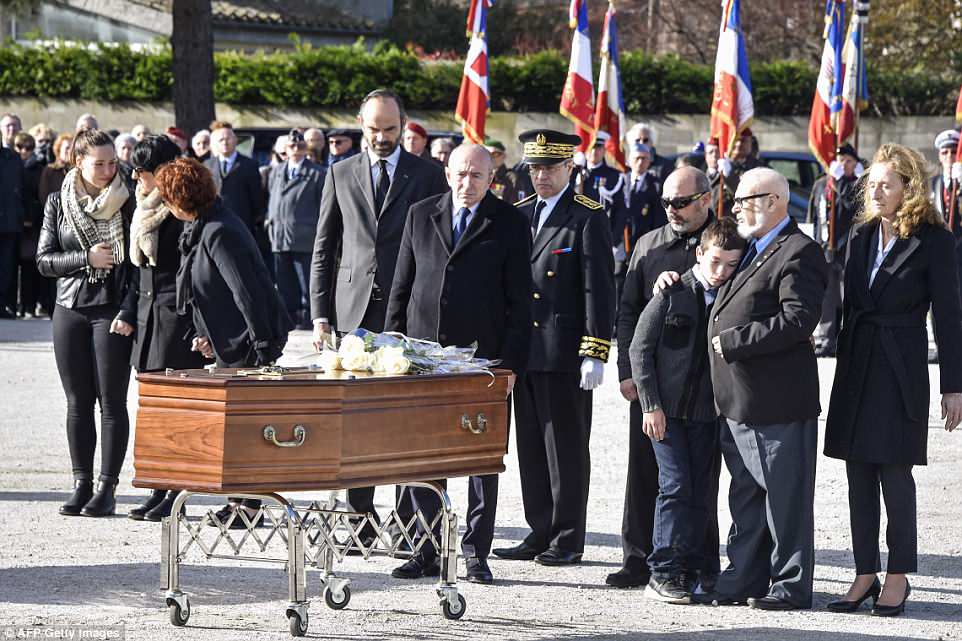 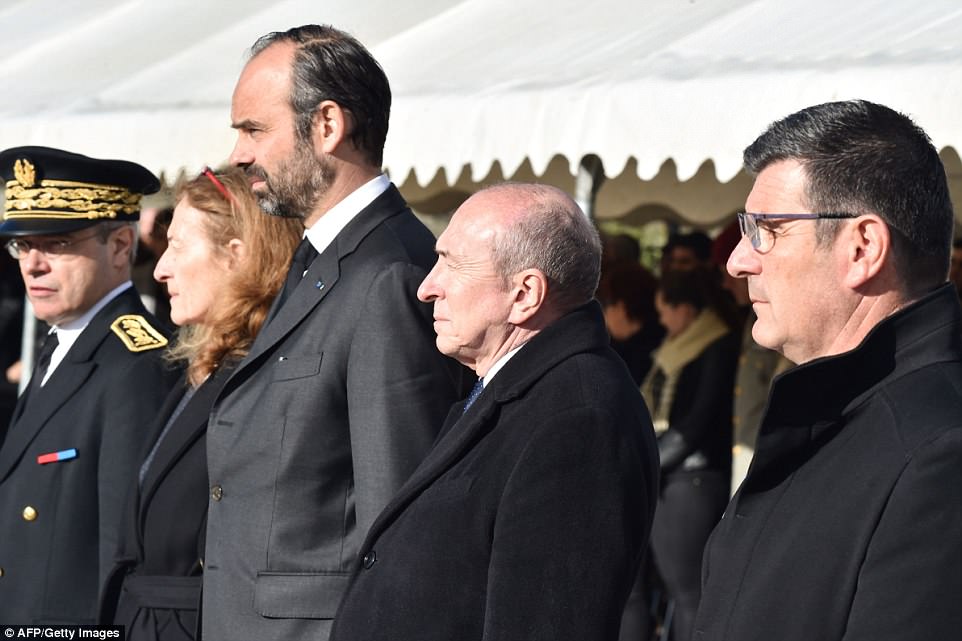 ‘To accept to die so the innocent can live: that is the essence of what it means to be a soldier,’ he said, comparing the policeman’s sacrifice to those of France’s World War II heroes.

‘Others, even many who are brave, would have wavered or hesitated.

‘We are not just fighting terrorist groups, the armies of Daesh and imams who preach hate and death,’ Macron said, using another name for the Islamic State group.

Lakdim, who claimed allegiance to ISIS, had already shot dead the passenger of a car he hijacked in nearby Carcassonne, before driving to the supermarket and killing two more people there.

Beltrame hoped to be able to negotiate with the 25-year-old, but Lakdim stabbed him in the throat and the officer died of his wounds the next morning.

A total of four men were murdered in the attacks around Carcassonne before Lakdim himself was gunned down by special forces GIGN police.

How the Carcassonne and Trebes terror attack unfolded 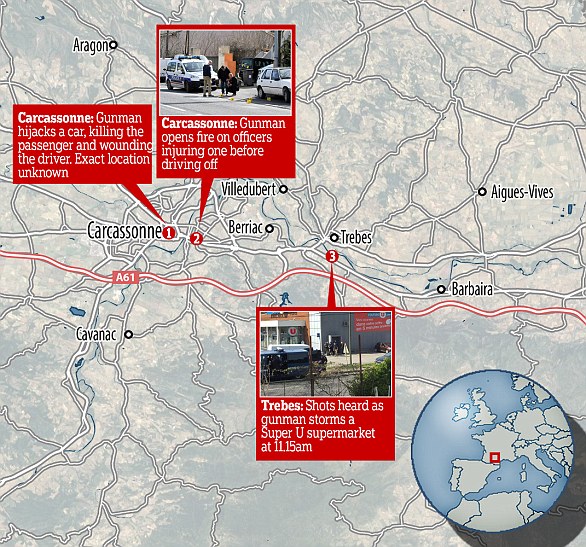 Some time before 11am:  Lakdim hijacks a car somewhere in his home town of Carcassonne.

Passenger Jean Mazieres is shot in the head and killed while the driver is wounded before the terrorist drives away.

Two people, customer Herve Sosna and Super U chief butcher Christian Medves, are later shot dead, though it is unclear precisely when or why.

Some time before 2pm: French policeman Arnaud Beltrame makes his way into the supermarket after agreeing to swap himself for a hostage.

He is later shot and stabbed to death, though it is not clear exactly how.