A fired up Gladys Berejiklian went for the jugular in the opening moments of the second day of the ICAC corruption inquiry into her secret affair with Daryl Maguire in Sydney.

The former NSW premier tried to turn the tables on Scott Robertson, the counsel assisting the Independent Commission Against Corruption on Monday morning, but Ms Berejiklian was quickly scolded by commissioner Ruth McColl for ‘looking around corners’.

‘But you are suggesting that I assumed any wrongdoing on (Mr Maguire’s) part,’ said Ms Berejiklian.

‘I didn’t use the word wrongdoing,’ said Mr Robertson.

‘But you are trying to, you’re asking me to answer a question which would assume that I presumed or had any knowledge of wrongdoing and the straight answer is I had no assumption, no knowledge that there was any wrongdoing involved,’ she said.

‘Ms Berejiklian, it would be better than if you answer the question rather than looking around corners,’ said Ms McColl. 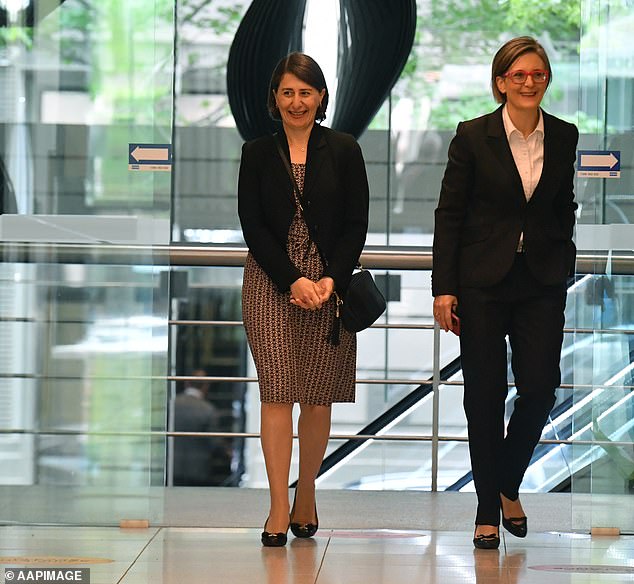 Former NSW Premier Gladys Berejiklian (pictured left) arrives at the Independent Commission Against Corruption on November 1 with one of her barristers, Sophie Callan (pictured right)

Evidence was presented that Mr Maguire said to Ms Berejiklian that she should get a second phone.

‘Many of my colleagues had two phones, one private, one business but because I was so busy and was so stressed, I always kept one phone throughout my entire career, I never had to (get a second phone),’ she said.

‘Many people did and many used to suggest that to me, outside of Mr Maguire, but I never chose to do that.’

Mr Robertson said ‘Mr Maguire sends a further message to you “They can read texts but not the little green men. It leaves no trace.”

‘Do you know what Mr Maguire was referring to by the little green men,’ he asks Ms Berejiklian.

‘Could be a reference to the WeChat icon which is a green icon,’ Mr Robertson said.

‘It could have been, I’ve never used that, so I don’t know,’ she replied.

WeChat is a Chinese messaging app. 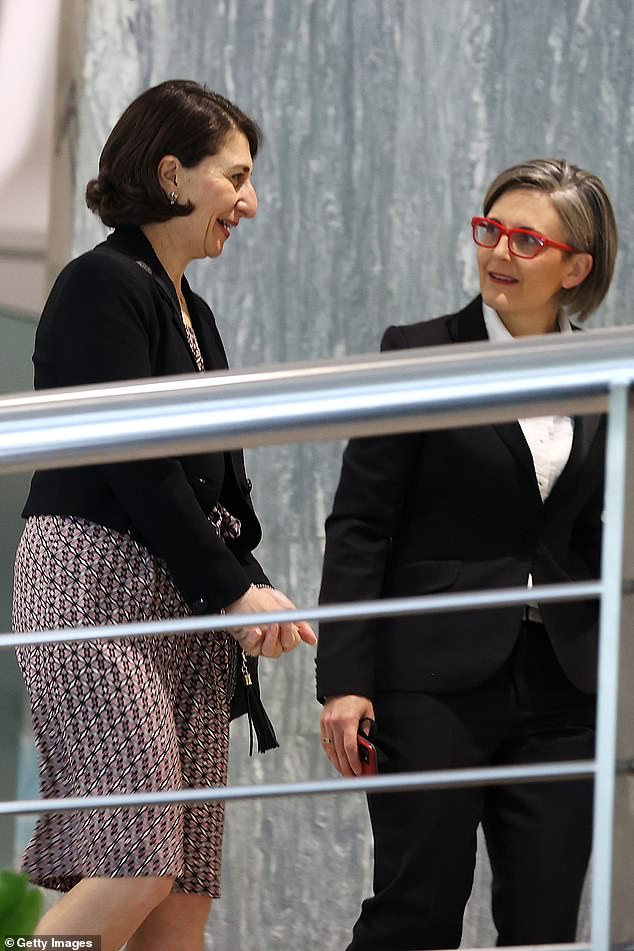 Former NSW premier Gladys Berejiklian (pictured left) arrives at the ICAC on November 1, in Sydney, Australia. One of her barristers, Sophie Callan, is pictured on the right

Earlier, Ms Berejiklian told ICAC counsel Mr Robertson of Mr Maguire: ‘I pressed him a number of times and he said he’d done nothing wrong.’

She also said she took Mr Maguire ‘at this word’.

Mr Robertson pressed Ms Berejiklian on whether she had any suspicions about Mr Maguire at this point in time.

In a tapped phone call from 2017, Mr Maguire told her he believed he might be able to secure a $1.5 million payment in relation to a land deal around the Badgerys Creek airport site in western Sydney.

‘I didn’t believe it would eventuate. I don’t even think I was paying attention,’ Ms Berejiklian said.

She said she had ‘no appreciation or understanding of what he was up to’ and just because Mr Maguire said certain things to her didn’t mean she ‘absorbed’ it.

‘Whether or not I listened or cared is another matter,’ she said. ‘I did not assume any wrongdoing.’

Ms Berejiklian added that ‘My radar didn’t go up.’ 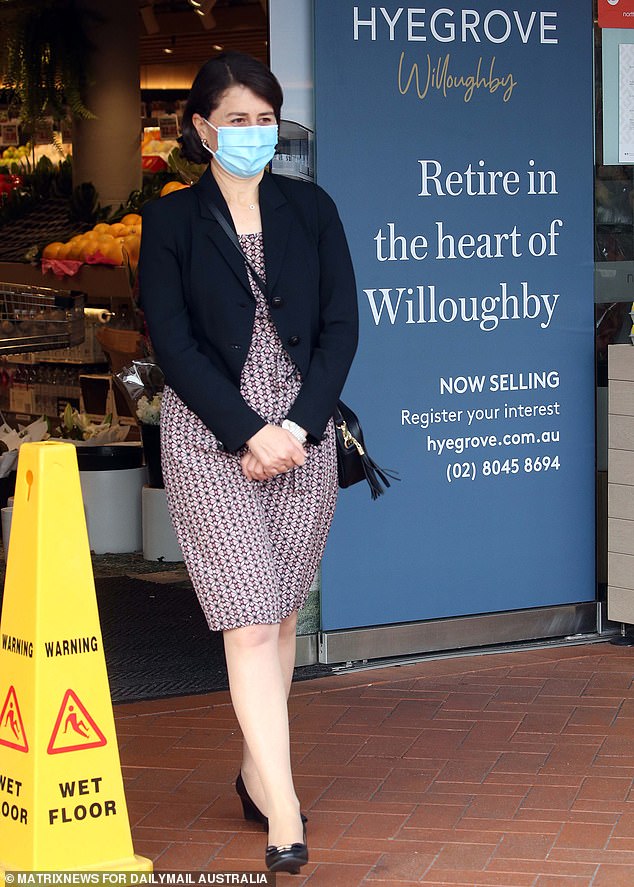 In a phone tap played to the ICAC, Ms Berejiklian told Mr Maguire she had secured $170 million for Wagga Wagga Base Hospital ‘in five minutes’ and said the then state Treasurer and now Premier Dominic Perrottet did what she asked him to.

‘Your predecessor Gladys Berejiklian of course has given evidence at the ICAC inquiry. In exchange between her and Daryl Maguire she said, ‘Dom does whatever I tell him to.’ Were those comments a surprise to you,’ asked host Natalie Barr.

‘Not at all. Gladys and I have a great relationship. As Premier and treasurer you work very closely together,’ Mr Perrottet said.

He said he didn’t want to ‘give a running commentary on the ICAC’ but ‘the strange thing … was that the funding had been in the budget the year before’.

‘So we have got a significant investment in healthcare facilities right across the state, Wagga Wagga is an important hospital the NSW government has been investing in.’ 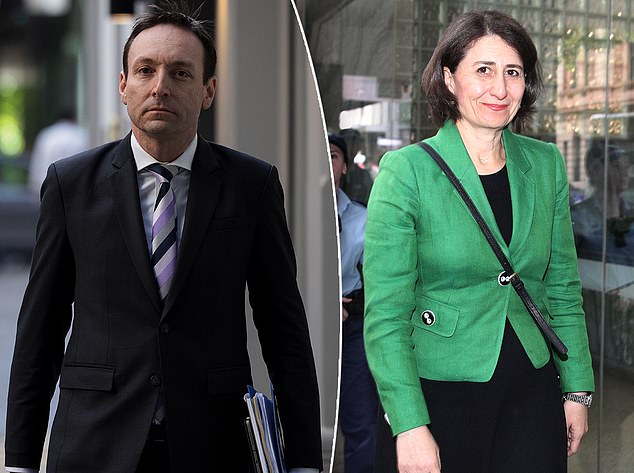 ‘If you were able to have your time again would you disclose your close personal relationship with Mr Maguire?’ Mr Robertson asked.

Ms Berejiklian responded she didn’t feel it was a commitment she could share with her parents, Arsha and Krikor, or her sisters.

‘I didn’t feel there was a sufficient significance to be able to do that in terms of significance.’

Ms Berejiklian said that she did not ask Mr Maguire for the key to her house that she had given to him back.

Mr Robertson asked Ms Berejiklian why she supported a multimillion-dollar proposal for the state government to pay for an upgrade of the Australian Clay Target Association (ACTA) gun club when Treasury said the submission did not demonstrate a net benefit to the state.

ACTA is based in Wagga Wagga and the project was strongly supported by her then secret boyfriend Mr Maguire.

At the time of the proposal in December 2016 Ms Berejiklian was NSW treasurer and chair of the government’s expenditure review committee (ERC).

‘The bush was on fire in terms of their attitude to the government,’ Ms Berejiklian said. ‘We’d just lost a seat to the Shooters Party.’

Her view was that supporting the gun club proposal project would have ‘kept a portion of the community pleased’ and the government was keen to show it wasn’t ignoring the bush.

In a testy exchange that set the tone for the day on Friday, Mr Robertson asked Ms Berejiklian about her understanding of the proceedings.

‘Are you having some difficulty with my questions? I am trying to frame them in a precise way as well so you can answer them yes or no. 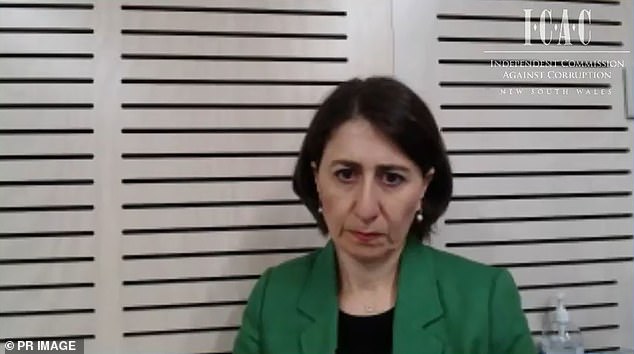 ‘Are you having some difficulty understanding my questions,’ he asked.

Ms Berejiklian replied: ‘Mr Robertson, I’m just concerned that you are skewing the fact that all of my colleagues rightfully deserve my attention and my advocacy and my support for things that mattered in their communities.’

‘You have senior counsel to represent you who have an opportunity to ask for clarification. You understand that, don’t you?’