Furious Israel Folau supporters have slammed GoFundMe for taking down his page.

The fundraising website removed the crowdfunding campaign on Monday, saying it does not tolerate discrimination.

The move has deeply divided opinion, with critics accusing the for-profit company of hypocrisy for shutting Folau down. 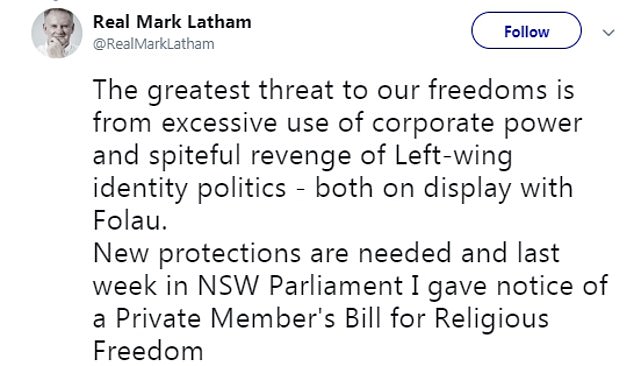 The move has deeply divided opinion, with critics accusing the for-profit company of hypocrisy for shutting Folau down 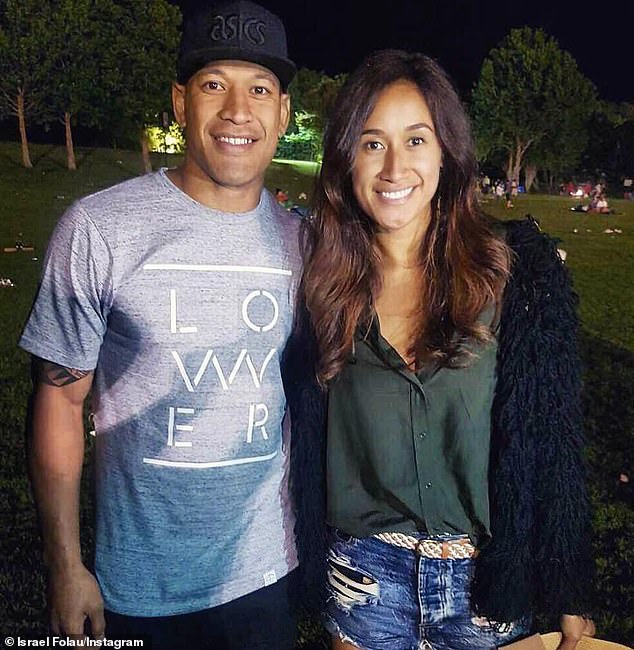 ‘Freedom of speech is timeless and should not be restricted by the leftist gormless oxygen thieves of GoFundMe.’

New South Wales One Nation leader Mark Latham also slammed the decision and claimed there is a ‘reign of terror’ against Christians in Australia.

However, other people praised GoFundMe for taking a tough stance.

‘No we will not fund your homophobia. Solid message,’ wrote one person on Twitter.

However, other people praised GoFundMe for taking a tough stance

Folau was sacked by Rugby Australia last month for beaching his contract with an Instagram post that said gay people are sinners and will go to hell.

The 30-year-old claims his sacking was illegal and is demanding $10million in damages.

Despite being a multi-millionaire with a $6million property portfolio, he asked regular Australians to pay $3million for his legal fees via a GoFundMe campaign.

After being live for six days, the controversial campaign was removed on Monday and the page only read ‘Campaign Not Found’.

A GoFundMe spokeswoman confirmed the page was taken down because it violated its terms and said donations will be refunded.

‘While we welcome GoFundMes engaging in diverse civil debate, we do not tolerate the promotion of discrimination or exclusion’, she said in a statement.

On Monday, Folau’s controversial page was removed and the website only read ‘Campaign Not Found’ 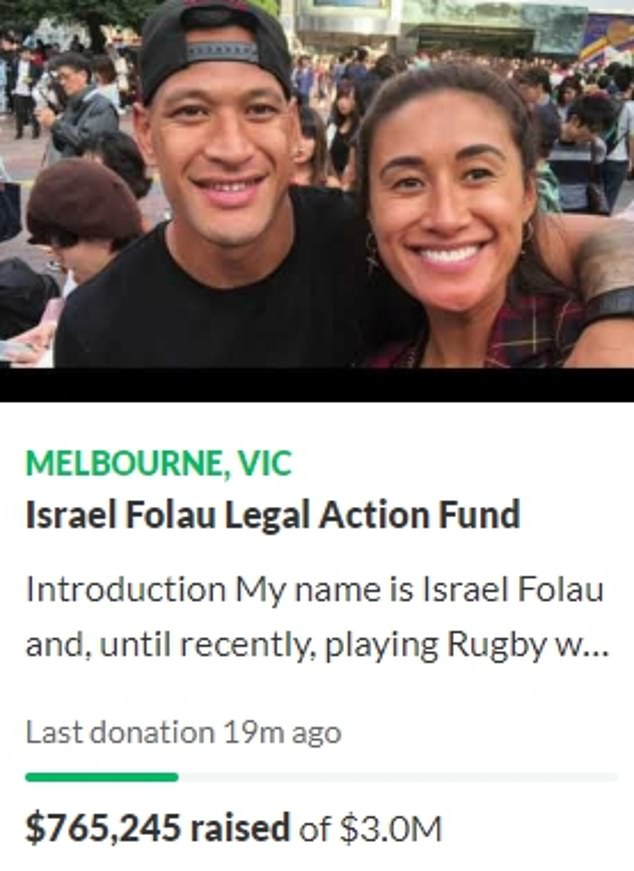 The fullback of Tongan descent said he and his wife Maria (pictured together) have spent $100,000 of his own money on legal bills so far – but are bracing for much higher fees to come

GoFundMe was accused of allowing the page to stay up for six days so it could sit on donors’ money while it gained interest.

One critic wrote on Twitter: ‘GoFundMe should also pay interest over the donors’ money.

Was GoFundMe right to take down the page?

‘I find #gofundme’s claim that it is only now that it discovers that #Folau’s campaign violates their terms of service both ridiculous & unbelievable. They should have rejected Folau’s campaign at the outset.’

The GoFundMe spokeswoman said the page stayed up to allow for a ‘routine period of evaluation’.

Folau’s fundraising efforts were met with a wave of criticism on Friday.

‘If you are truly interested in supporting a Christian cause… do not donate to the #Folau fund,’ he posted on Twitter. 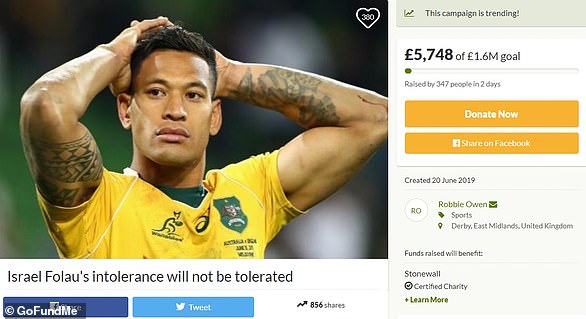 Folau signed a four-year contract in 2018 worth an estimated $5million and has been one of the country’s best paid sportsmen since joining rugby union in 2013.

But Rugby Australia said he breached his contract which stated he must treat people equally and fairly.

Folau insists he was only sharing a message from the Bible and his sacking has cost him the ‘best years’ of his playing career.

His fundraising page, launched last Tuesday, featured a video of him talking to the camera cut with pictures of his childhood.

The fullback of Tongan descent said he and his wife Maria have spent $100,000 of his own money on legal bills so far – but are bracing for much higher fees to come. 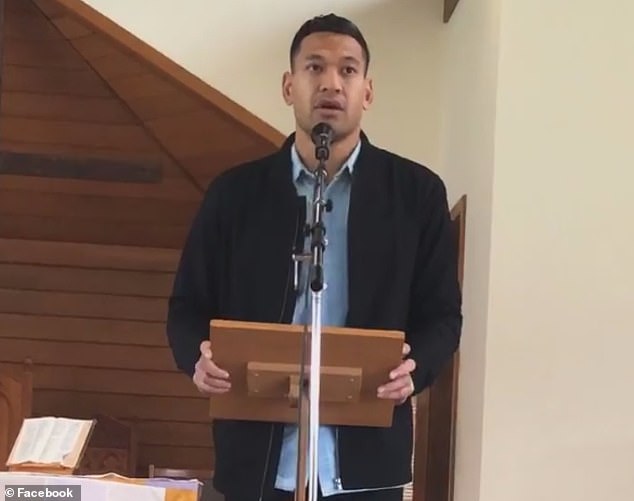 ‘That was just to try and deal with Rugby Australia’s internal tribunal processes.

‘The money I am asking for is solely to fund the rest of my action in court,’ he wrote.

On Friday morning he spoke publicly about the saga for the first time on Alan Jones’ 2GB radio show.

The star said he did not intend to offend gay people and revealed he is motivated by ‘standing up for the word of God’.

‘From my perspective this comes from a place of love… so they can repent if they chose to and turn away from that and can go to heaven.’

Explaining why he is taking Rugby Australia on, he said: ‘My principle and my faith are what’s driving me from the get-go.

‘My faith defines me as a person.

‘My identity is my faith – that’s why I want to stand up for the word of God.’

Folau lodged a claim on 6 June, claiming his sacking breached Section 772 of the Fair Work Act.

The clause states it is unlawful to terminate employment on the grounds of ­religion.

Last Sunday Folau launched another attack on gay people and also criticised young people being allowed to change gender during a sermon at his Sydney church.

He described homosexuality as a sin and claimed the devil was behind primary school children being allowed to decide if they wanted to change gender.

‘This is what the devil is trying to do, to instill into the government, into this world, into society, and it is slowly happening,’ Folau said in his Sunday sermon at The Truth of Jesus Christ Church in Kenthurst.

‘The sad thing is why a lot of people out there that are non-Christians say bad things about the church, is because a lot of the churches allow those things to happen.

‘They say that a man and a man should be able to be married and there is nothing wrong with it. This buys into the theme of pleasing man rather than pleasing God and standing up for the truth.’

The 30-year-old’s rant was posted on the church’s Facebook page.

‘Are we too scared because we might be cast out by our workplace or cast out of somewhere because we’re not liked or loved by those around us and don’t believe the same thing we do?’ he asked.

‘You might be the only born-again Christian in that workplace, you might feel a bit awkward with your co-workers because they are in the world and you’re not. We should feel blessed… because God has called us.’ 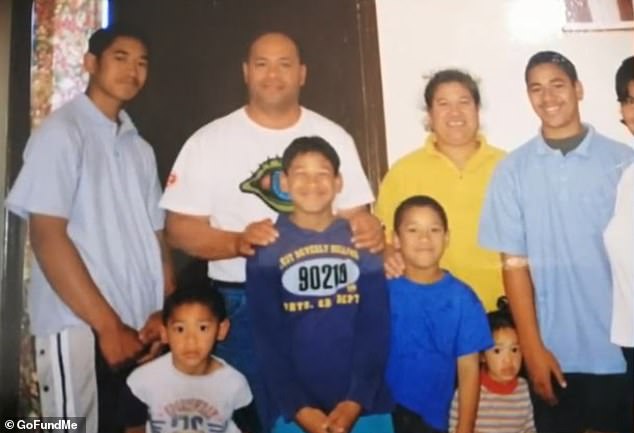 The 30-year-old (center with his family as a child) was sacked after he made repeated homophobic comments on social media, claiming that homosexuals are destined for hell unless they repent for their sins