Spain captain Irene Paredes furiously insisted there was a ‘clear foul’ in the build-up to England’s equaliser in their dramatic Euro 2022 quarter-final win on Wednesday – even suggesting referee Stephanie Frappart showed bias to the home side.

The Lionesses battled back from a goal down to claim a place in the semi-finals as Georgia Stanway’s superb extra-time strike sealed a 2-1 victory at the Amex Stadium. 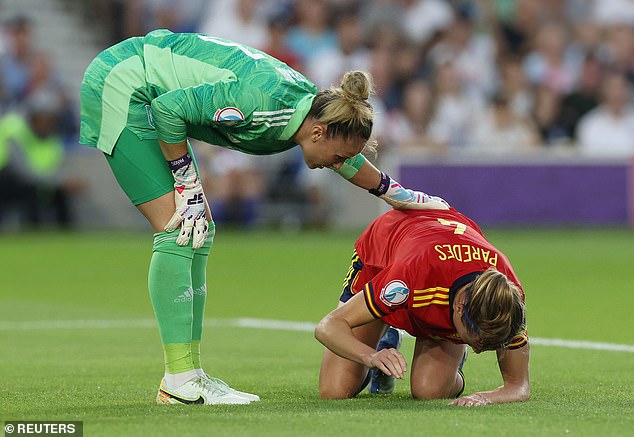 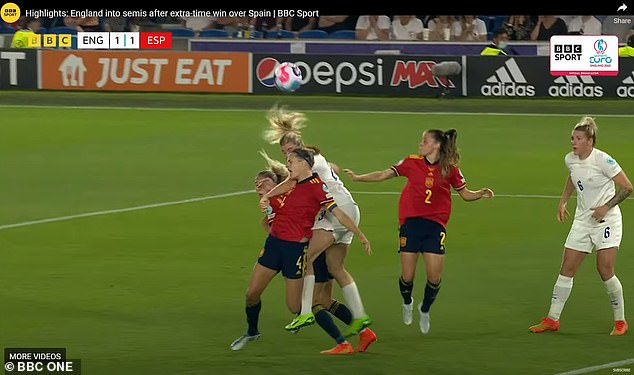 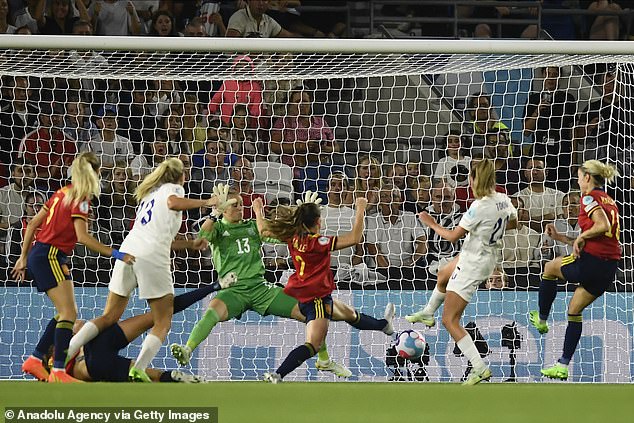 Ella Toone pounced on the loose ball but Paredes (left, on the floor) believes she was fouled

But it was the build-up to Toone’s equaliser that has angered the Spaniards, with Paredes in particular insisting she was fouled in the build-up.

The Barcelona defender was involved in a tussle with Russo as the England forward battled to knock a cross down into Toone’s path.

Paredes insisted she ‘couldn’t jump’ because Russo ‘hit me with her elbow on the neck’.

However, Frappart and her team of officials saw nothing wrong with the collision and allowed the goal to stand – much to the delight of the England fans.

Speaking after the game, a furious Paredes appeared to suggest Frappart had been more lenient to the Lionesses and criticised the French official for blowing the full-time whistle when the Spaniards had a last-gasp corner.

The 31-year-old said: ‘I can’t jump because she hits me with her elbow on the neck, a clear foul that she (Frappart) doesn’t want to whistle or review, and that decides the match. 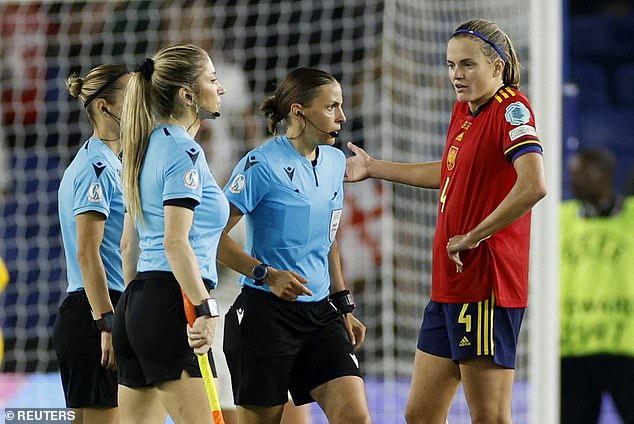 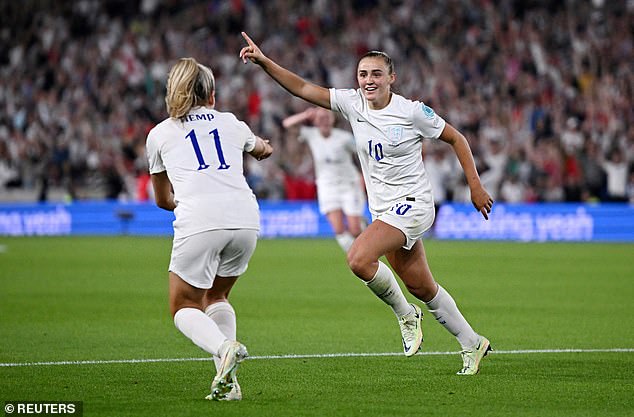 ‘We have been good but they score a goal that they do not want to review because you are in England. It is complicated.

‘Then they score a great goal and the game ends with a corner in our favor. It is true that we have had more chances and we have not put them away. But there are details that diminish you, despite the fact that we have played a great game. 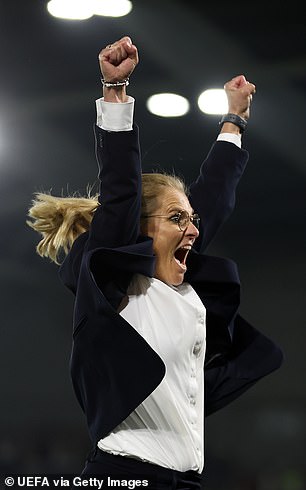 ‘We have equipment (VAR) for this and much more, but once again we are out. It’s very hard when the team can go further. Leaving in the quarter-finals is hard.’

The Lionesses, Euros runners-up in 1984 and 2009, will now face either Sweden or Belgium in the last four at Bramall Lane next Tuesday as they continue their quest for a first major piece of silverware.

Spain head coach Jorge Vilda admitted it was a difficult day for his squad after they dominated possession on the south coast.

‘It’s a disappointing defeat and disappointing to go out of this competition. If there’s a good way to lose I think it’s by playing the sort of game that my players have done tonight,’ Vilda said.

‘We are all very proud of what we saw out on the pitch, we gave everything and now we have to keep our heads held high.

‘We have a very good team here, there is a bright future ahead based on what we have seen at this tournament. It’s a difficult day for us.’