Crispy and crunchy or light and fluffy? Row breaks out over the perfect roast potato after Toby Carvery customer complains of overdone spuds only for others to say that’s just how they like them

Chicken breast or thigh, gravy on the side or all over and do peas really belong on the plate? The great British roast is an institution that divides opinions like few others.

But one Toby Carvery customer from Kent has ignited the mother of all roasty-rows after she angrily shared photos of her potatoes so overcooked the edges were charred – only for baffled diners to argue that’s how the perfect spud is cooked.

Laura Heskett was left disappointed when her party was offered the blackened and burnt potatoes as part of their £6.49 all you can eat roast dinner. 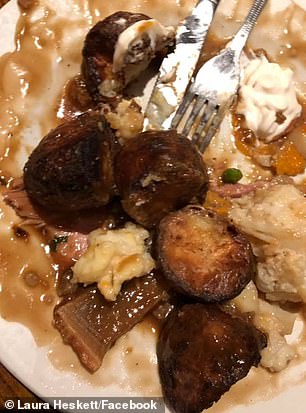 Laura Heskett (pictured left), was left reeling after the Toby Carvery roast potatoes she had been looking forward to were charred and burnt (pictured right). But dozens of Facebook users argued the spuds were cooked to perfection – sparking the mother of all roasty-rows online 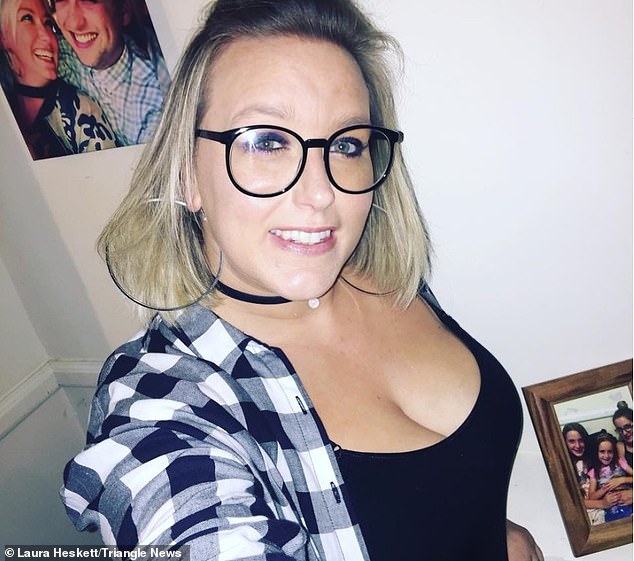 Laura Heskett was left disappointed when her party were offered the blackened and burnt potatoes as part of their £6.49 all you can eat roast dinner. When she complained about the burnt meal on Facebook expecting universal agreement, dozens of people said they would have welcomed the roasties that way

When she complained about the burnt meal on Facebook expecting universal agreement, dozens of people said they would have welcomed the roasties that way.

Ms Heskett originally posted a snap of the meal alongside the caption and a thumbs down emoji: ‘Toby Carvery expecting us to eat roasties like this!’

‘And the ones that came out after looked okay but they expected everyone to eat these first there was no other choice.

‘Please don’t insult my intelligence by thinking I would pick these over nicer ones.

‘Obviously the whole lot looked like this trust me I picked the least burnt ones believe it or not.

‘Clearly these were the potatoes they were serving even the waitress was disgusted and gave us one meal free.’

Ms Heskett’s image shows the tatties nestling between what looks like mashed potato or cauliflower and meat – and, controversially, a dollop of mayonnaise.

The NHS ate the meal in the Toby branch in Ramsgate, Kent but was then hit by a barage of comments in support of the charred roasty.

The NHS ate the meal in the Toby branch in Ramsgate, Kent but was then hit by a barage of comments in support of the charred roasty

Karina Barker said: ‘We ate there tonight and the roast potatoes were lush, I like mine crispy like that.

‘But if I didn’t, I just wouldn’t have picked them. There was another choice – don’t get the potatoes.’

Ria Baldoc said: ‘I must be weird I love potatoes like that!’

But not all were in agreement.

Peter Emmerson-Darnell said: ‘That is one disgusting plate of and I use the term loosely…food!!’

Sarah Louise Prescott said: ‘I feel like you may have picked the wrong ones. The ones we had was perfectly fine.’

‘And why for the love of GOD are people sitting here getting their knickers in a twist because someone doesn’t like their f****** spuds looking like lumps of charcoal?

‘I love Toby, cheap, cheerful and great for families. Don’t matter how much you pay for it, you still deserve to get edible food. If you like your spuds like that, good for you, she clearly doesn’t.’

Laura then added: ‘I left mine I did go without these were on my friends plate and she likes burnt stuff but still couldn’t eat these dry nasty things. Potatoes are life of a roast.

‘I would expect a place that is famous for roasts mainly to have their potatoes on point I would rather wait for fresh ones than be served these.’

Jean Harley said of the chef who served the potatoes: ‘Well if he makes roast potatoes like that then I should think their going to get a lot of complaints (I definitely would complain ) serving ones like that up.’