Fury at £100m bonus for the Sports Direct prince: Mike Ashley’s future son-in-law set to replace him as chief exec next year

Mike Ashley’s Frasers Group has been slammed for ‘absurd’ plans to hand the billionaire’s future son-in-law a £100million bonus.

The High Street empire – which includes House of Fraser and Sports Direct – said Michael Murray could receive the windfall after he succeeds the tracksuit tycoon as chief executive in May next year.

The 31-year-old, who is engaged to Ashley’s eldest daughter Anna, will collect the bonus if the share price trades at £15 or higher for 30 days in a row before October 2025. That is up from last night’s closing price of 656.5p.

Family fortunes: Ashley (right) with future son-in-law Michael Murray, who succeeds the tracksuit tycoon as chief exec in May next year

The company described the target as ‘challenging but achievable’ given the share price would need to more than double.

But the stock has more than trebled in little over a year as Frasers bounced back from the pandemic.

Should the share price hit £15, Ashley’s stake of around 60 per cent would be valued at some £5billion, up from £2.2billion at present.

Critics claimed Ashley was trying to ram through a proposal that would disproportionately reward Murray for the company’s successes.

It would be one of the biggest bonuses ever handed to the boss of a listed British company.

The huge sum is also likely to raise eyebrows because of the £177.5million that Frasers Group accepted from the Government during the pandemic, via business rates relief and the furlough scheme.

Murray will also get a salary of £1million per year despite having no previous experience of running a big company.

His role is ‘head of elevation’ at Frasers, which has seen him oversee improvements to many of the group’s stores.

Mark Fletcher, the Tory MP whose constituency includes the firm’s Shirebrook HQ, said he would rather see Frasers Group ‘giving workers better terms and conditions and investing in the community of Shirebrook than handing out big bonuses’.

Andrew Speke of the High Pay Centre said: ‘Regardless of whether Murray is able to double, triple or quadruple Frasers’ share price, it seems absurd for anyone to be paid £100million. 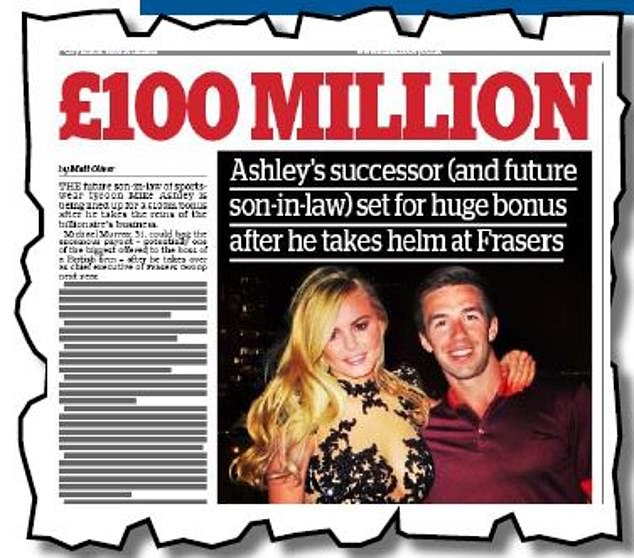 We have to remember that when businesses are successful it’s due to the combined efforts of staff across the company.

So eye-watering pay packages for those at the top are unlikely to ever be a fair reflection of that individual’s contribution.’

He raised concerns that Ashley would be able to ram the proposal through at an annual general meeting next month even if other investors resist.

‘This is clearly a case of a 60 per cent shareholder forcing something through – and of the non-executive directors who should be independent not doing their jobs and standing up for other investors,’ Weight said.

‘It’s another red flag above Frasers, in my view, alongside many others.’ Frasers insisted it had been ‘mindful of setting targets that were both stretching and achievable and that would reward an incoming chief executive commensurately with the shareholder value that could be attained’.

It added: ‘The board believes that the significant increase in value of the shares to be achieved before Michael’s share option award vests is suitably challenging but achievable.’

The proposals have come despite growing rebellions in the City over pay.

Former Persimmon boss Jeff Fairburn prompted outrage and eventually resigned after he was handed eye-watering payouts by the housebuilder of £82million over just two years.

And Wizz Air investors recently rebelled over plans to hand boss Jozsef Varadi £100million if he can double the carrier’s share price.