A Labour peer who relocated to California has started her third lucrative Silicon Valley job – despite boasting about being a member of the House of Lords.

Oona King, 51, took an open-ended ‘leave of absence’ from the Lords in November 2016 and moved to San Francisco to become director of diversity for YouTube.

She left that role to become a director at Google in January last year. Then last month she moved to Los Angeles after being appointed vice president of diversity and inclusion at social media firm Snapchat.

In her finery: Labour peer Oona King, who has taken a leave of absence from the House of Lords to move to America, pictured wearing peerage robes in the Lords 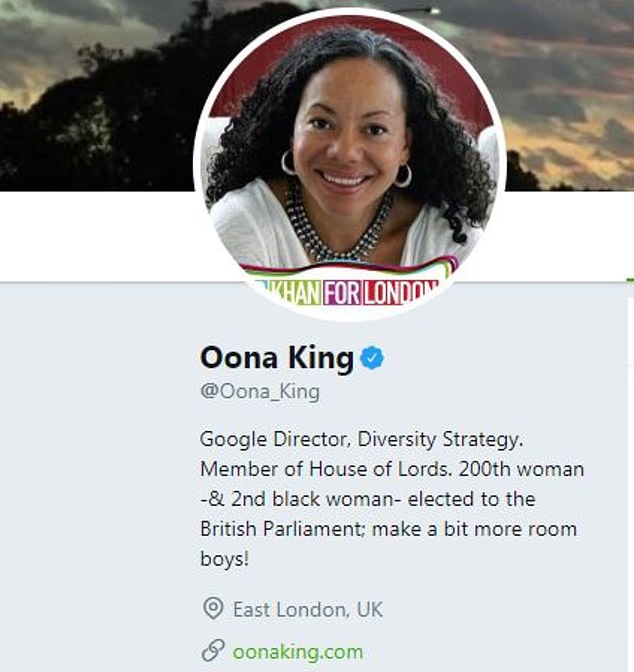 Her Twitter account: It claims that she is still a peer and lives in East London, UK

After announcing her departure from British politics, the former Labour minister, her husband and four children moved in to a £1.4million home in Woodside, one of American’s wealthiest communities where pictures posted on social media show her enjoying a poolside party attended by a leading US film director.

But in an arrangement branded ‘jaw dropping’ by critics she has been allowed to keep her title and is exempt from the Lords’ Code of Conduct, which requires peers to disclose financial interests including directorships and other paid work, significant shareholding, sponsorships and any relevant non-financial interests.

Despite being on leave, Baroness King still describes herself as a member of the Lords on her official website and Twitter page – where she is a vocal critic of the Tory Government and calls for a people’s vote on Brexit – and, according to her LinkedIn profile, is currently responsible for ‘scrutinising legislation and changing the law’.

She proudly uses her full title on her personal website and hosted a charity event last year entitled ‘Girl Power with the Baroness’ to raise money for a San Francisco school.

In August last year, Baroness King hosted Dame Sue Owen, permanent secretary of the Department for Digital, Culture, Media and Sport at the Google Campus in London as part of a diversity and inclusion meeting attended by several other members of the company. 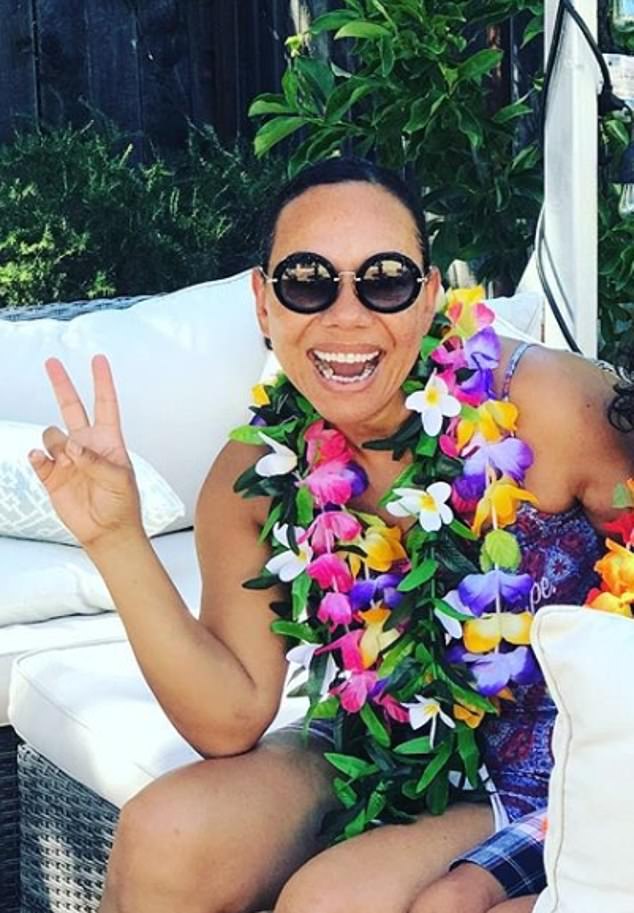 Living the high life: Oona King posing for a casual picture at her US home 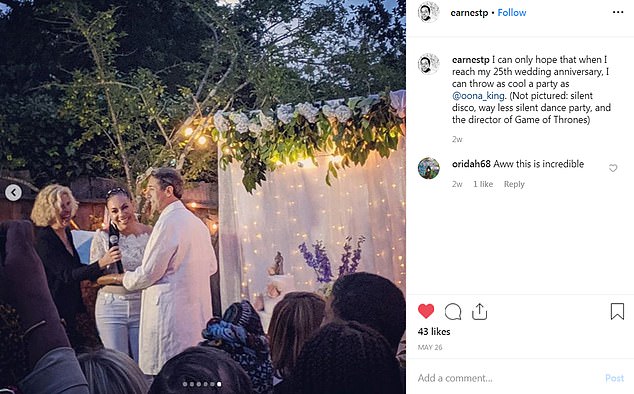 American dream: At a party in her California garden. She is not pictured but the poster thanks her in the comments

Baroness King is one of 17 peers taking advantage of a ‘leave of absence’. Under the scheme peers forfeit their parliamentary rights, such as voting, taking part in debates, asking questions of Government along with a daily £300 allowance and expenses.

They are not required to give a reason for taking the leave and can return to the Lords whenever they want without having to declare what they have been doing while away. But campaigners say the arrangement could allow peers to profit from their status and influence without being open and accountable.

There were also calls for absences to be limited to a maximum of one year. There is no suggestion any of the peers currently on leave of absence have done anything wrong.

But critics are concerned by such peers’ current entry on the Register of Interests being recorded as ‘nil’ despite several working for businesses at the centre of major political disputes.

At least five of the peers taking leave of absence are known to be working in the private sector, two have left to work in public service roles abroad while others appear to have simply retired.

Lord Browne, who became chairman of the UK subsidiary of Chinese telecoms giant Huawei in 2015, took a leave of absence in March 2018 for example. 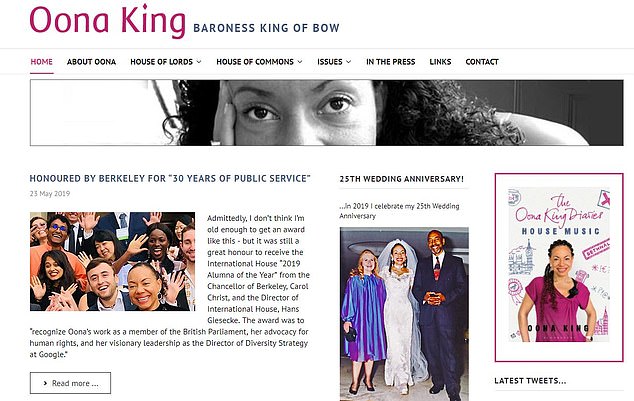 Her website: She is still using the title ‘Baroness King’ despite being on a leave of absence

Security concerns about plans for Huawei’s involvement in building the UK’s new 5G network have had a huge political fallout in recent months.

Duncan Hames, from Transparency International UK, said: ‘Whilst the breadth of professional backgrounds of those serving in the Lords can be an asset to Parliament, there are weak checks on how they continue to manage the relationship between their public role and private engagements – and the conflicts of interest which may arise. That members of the House of Lords are not required to declare new financial interests on taking leave of Parliament whenever it suits them is an invitation to escape public scrutiny.’

Sir Alistair Graham, former chairman of the committee for standards in public life, said: ‘There should be specific limits to the leave of absence after which they should be asked to give up their life peerage.’ Darren Hughes, chief executive of the Electoral Reform Society said: ‘What we see here is an accountability black hole in the House of Lords.

‘Peers being able to opt out of the usual scrutiny of their affairs allows them to go off and pursue outside interests away from the chamber with little to no transparency.’

SNP MP Rona Mackay said the arrangement was ‘jaw dropping’ while Tory MP Andrew Bridgen said: ‘I think that members of the House of Lords need to decide if they want to hold their privileged position or they don’t, in which case they should hand back their titles and resign.’

Others currently on leave and working in the private sector include ex-Tory minister Greg Barker. The former energy and climate change minister, now Lord Barker of Battle, took leave in February this year.

He said it was to concentrate on his work as chairman of En+, Russia’s largest aluminium producer. And Baroness Shields, a former advisor to David Cameron on internet safety and the digital economy, took a leave of absence in May last year to become CEO of BenevolentAI, a £1.5billion artificial intelligence start-up

Shriti Vadera has been on a leave of absence since December 2011, four years after joining the Lords, to take up business commitments. The former investment banker became chairman of Santander UK in 2015.

She does not use her title in her private work and says all her business interests are public. A House of Lords spokesman said: ‘Before going on leave of absence members must confirm that they have a reasonable expectation that they will return as an active member in the future.

‘Taking leave of absence is an appropriate way for members who cannot play an active part in the House due to other commitments to take a temporary break from membership.’

Lord Barker and Baroness Vadera did not wish to comment on the Daily Mail’s story.

Baroness King and Baroness Shields did not respond to requests for comment.

By Tom Payne and Tom Kelly for the Daily Mail

Peers can take leave of absence to concentrate on lucrative roles in the private sector or work in public service jobs. Here are some of the other Lords currently on leave: 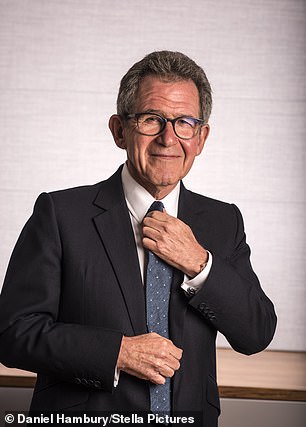 Crossbencher John Browne who took a leave of absence last March, three years after becoming chairman of the UK subsidiary of Huawei

He has also been involved in a multi-billion pound merger at an oil and gas giant run by Russian billionaire Mikhail Fridman – ranked tenth on The Sunday Times rich list with a net worth of £10.9billion. He has been chairman of the company, L1 energy, since 2015. The firm is now on course to become one of the world’s top oil explorers.

A spokesman for Lord Browne said: ‘Lord Browne requested a leave of absence in order to give him time to fulfil a trio of public service and charitable commitments at the Crick Institute, UK Research and Innovation, and the Courtauld Institute of Art.’

Greg Barker, David Cameron’s former climate change minister, took leave of absence in February to concentrate on his work for a Russian firm. He was appointed chairman of aluminium company EN+, founded by oligarch Oleg Deripaska, in 2017, two years after becoming a peer. EN+ has no operations in the UK.

Lord Barker of Battle, who worked for a Russian energy company before going into politics, was recently awarded a bonus of between £3-4million for helping negotiate the removal of US sanctions on En+, according to Bloomberg. The deal involved removing Mr Deripaska’s control of the company.

American-born ‘Cameron Cutie’ Joanna Shields, 56, was plucked from the private sector by David Cameron to become his adviser on the digital economy.

The former minister for internet security was ennobled as Baroness Shields of Maida Vale in September 2014, but took leave on 1 May last year after becoming CEO of Benevolent AI, a £1.5billion London start-up.

The firm harnesses artificial intelligence to help discover new drugs to treat diseases. She has said she would return to the Lords ‘one day.’ 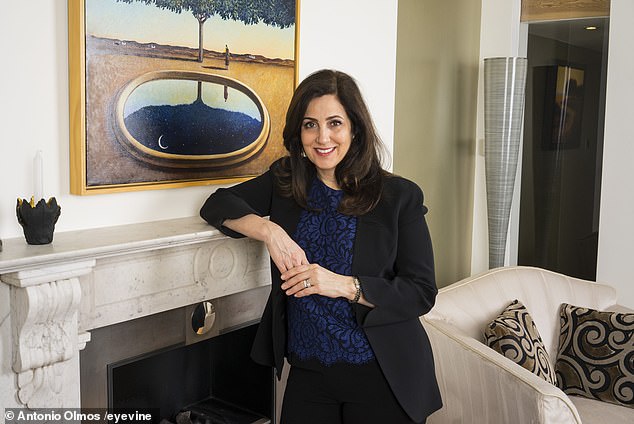 American-born Joanna Shields, 56, who advised David Cameron on the digital economy. She took leave after becoming CEO of an artificial intelligence company

Former business minister Shriti Vadera has been on a leave of absence since December 2011.

The 56-year-old had a long career as an investment banker before joining the government, where she worked as then premier Gordon Brown’s most trusted adviser during the financial crisis. Ennobled in 2007, she rarely spoke in the Lords. She does not use her title in her private work.

OUR MAN IN FRANCE

Edward Llewellyn, 53, took leave in November 2016 to become the British ambassador to France. A Foreign Office spokesman said: ‘The procedure for peers taking a leave of absence from the House of Lords is well established, particularly when it comes to taking up diplomatic appointments.’