The Future chief executive sold 200,000 shares which she earned after hitting performance targets in 2017.

The seven-figure sum, revealed in a filing to the stock exchange, comes on top of a basic salary of £575,000.

Byng-Thorne is one of the best paid FTSE chief executives and has been rewarded handsomely for turning around the magazine publisher.

A spokesman for the publisher of Woman’s Weekly and Total Guitar said: ‘The transactions were made for personal financial planning purposes.

Almost half of the proceeds will be used to pay tax obligations and, as CEO, Zillah Byng-Thorne retains a stake in the company that far exceeds shareholding requirements, reflecting her continued confidence in the company’s prospects.’

In the past four years, when bonus and other payments are added, she has pocketed almost £26million as chief executive of the firm behind more than 200 magazines and websites from Four-Four-Two to Horse & Hound and Marie Claire.

Byng-Thorne joined in 2014 from Auto Trader and ruthlessly set about whipping the company into shape. 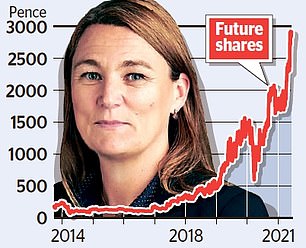 She was brutal in the early stages of her reign and put Future’s entire British staff on redundancy notice.

She axed failing magazines and focused on titles that wrote about people’s hobbies and which could generate revenues online.

Under her the company has also pursued a stream of acquisitions which have boosted Future’s share price – including price comparison site Go Compare – and seen revenues, profit and audience skyrocket.

Half-year results earlier this month saw profits up 100 per cent at the FTSE 250 firm to £56.9million.

Byng-Thorne is on a new incentive scheme and if targets are met she is in line for a whopping £40million bonus by 2025.