The G-20 summit in Bali is ending with a joint declaration that revealed continuing fissures over Russia’s brutal war on Ukraine – with language that did not conceal the stark differences over the bloodshed.

Final language on a declaration was still emerging Wednesday, when world leaders were reacting to the missile that exploded in Poland near the Ukrainian border – prompting an emergency meeting by President Joe Biden and key NATO allies.

Although Biden said experts were still investigating the missile explosion and its trajectory, it came amid yet another barrage of Russian missiles fired at civilian infrastructure targets in Ukraine – in a war that has impacted world food supplies, immigration, and global economies.

Members of the Group of 20 leading economies ended by declaring that most of them strongly condemned the war in Ukraine and warning that the conflict is intensifying fragilities in the world’s economy.

The closing declaration emerged as Biden flew home while vowing to investigate the missile explosion in Poland.

The summit’s closing declaration was noteworthy in highlighting the war given the divisions among the group, which includes not only Russia itself but also countries such as China and India that have significant trade ties with Moscow and have stopped short of outright criticism of the war.

Russia’s war in Ukraine caused a deep rift amid the nations gathered in Bali, Indonesia for the G20 summit. Leaders planted mangrove saplings in an environmental gesture

Still, it acknowledged ‘there were other views and different assessments’ and stated that the G-20 is ‘not the forum to resolve security issues.’

Russian President Vladimir Putin didn’t come to the summit, but sent his foreign minister Sergey Lavrov, who on Tuesday accused leaders of trying to ‘politicize’ a joint declaration. He ended up flying out Tuesday night, according to Russian state media.

The conflict loomed large over the two-day summit held on the tropical island of Bali in Indonesia.

News early in the day of an explosion that rocked eastern Poland prompted U.S. President Joe Biden to hastily arrange an emergency meeting with G-7 and NATO members gathered at the summit.

Poland said the blast near the Ukrainian border was caused by a Russian-made missile and that it was investigating what happened. The NATO member stopped short of blaming Russia for the incident, which killed two people. Russia denied involvement. 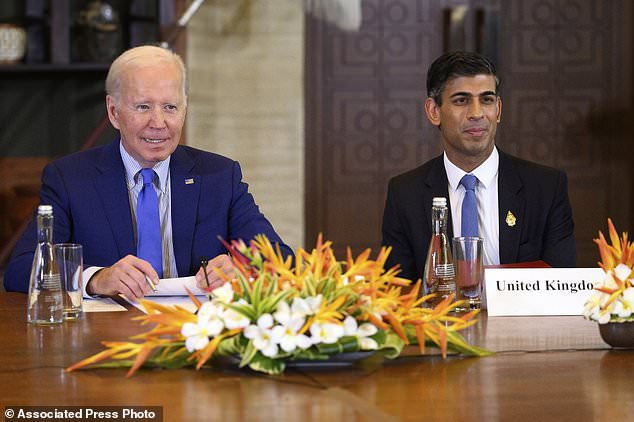 U.S. President Joe Biden, left, and British Prime Minister Rishi Sunak attend an emergency meeting of leaders at the G20 summit after a missile landed in Poland near the Ukrainian border 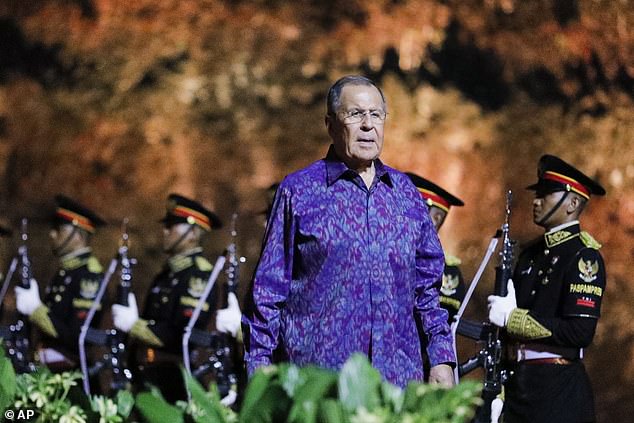 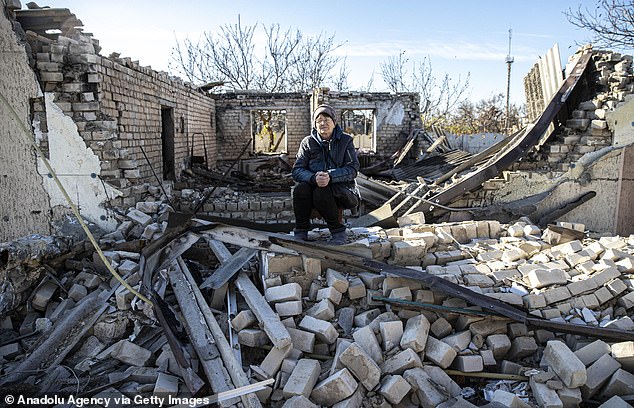 Russia has destroyed civilian buildings and infrastructure in Ukraine 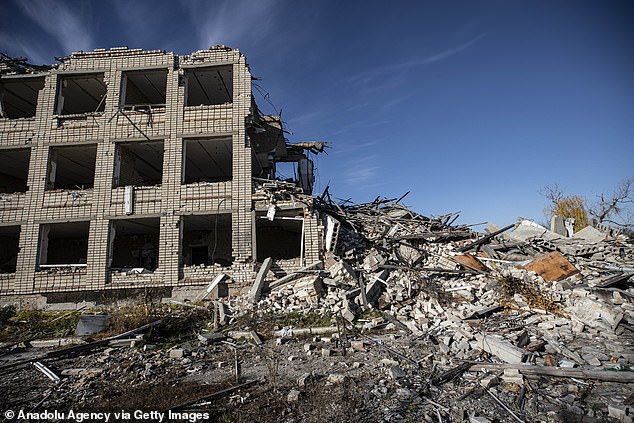 A view of destroyed buildings in Posad-Pokrovske village, Kherson, Ukraine on November 15, 2022. The village where 5 million civilians lived before the Russian-Ukrainian war has been under attack for nine months by Russian forces 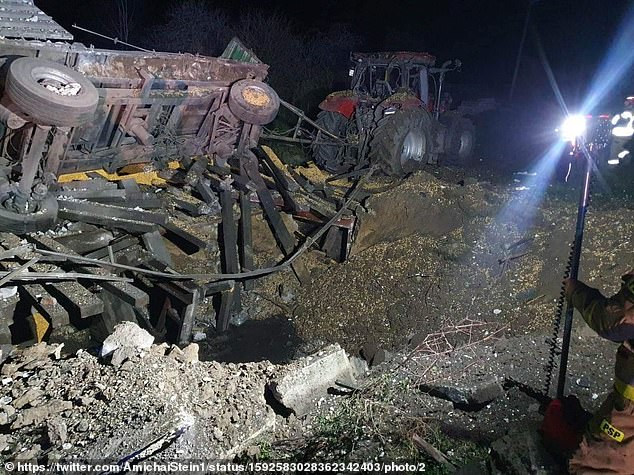 Twin explosions hit Przewodów, a rural village located five miles from the Ukrainian border in south western Poland. The aftermath of the explosions, which killed two, is pictured 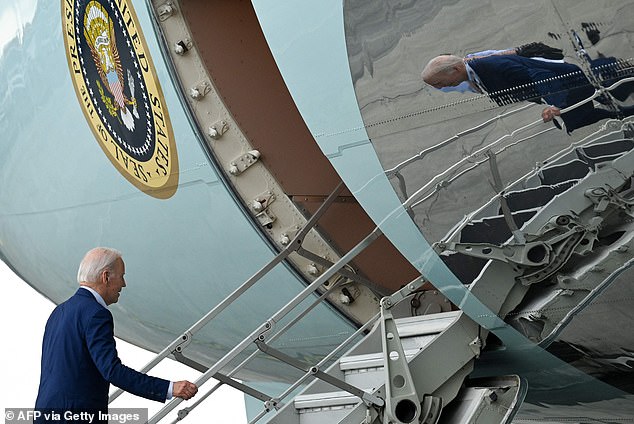 President Joe Biden boarded Air Force One for the long flight back to Washington, D.C., on Wednesday, after a six-day, three-summit trip around the world, that ended with the G20 meeting in Bali, Indonesia 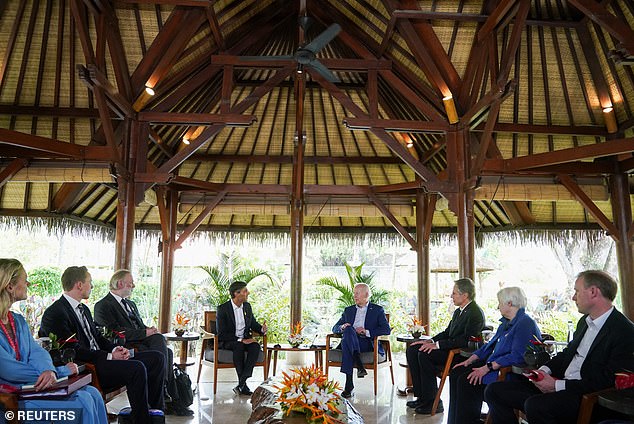 Biden said it was ‘unlikely’ that the missile was fired from Russia, and he pledged support for Poland´s investigation.

‘There is preliminary information that contests that,’ Biden told reporters when asked if the missile had been fired from Russia. ‘It is unlikely in the lines of the trajectory that it was fired from Russia, but we´ll see.’

The careful wording of the final statement reflected tensions at the gathering and the challenge for the U.S. and its allies to isolate Putin´s government. Several G-20 members, including host Indonesia, are wary of becoming entangled in disputes between bigger powers.

Still, the declaration was a strong rebuke of the war that has killed thousands, heightened global security tensions and disrupted the world economy.

Russian Foreign Minister Sergey Lavrov, who led the Russian delegation to Indonesia in place of Putin, denounced the Biden administration push to condemn Moscow in his remarks Tuesday.

The emergency meeting early in the day included the leaders of the G-7, which includes Canada, France, Germany, Italy, Japan, the United Kingdom and the European Union, along with the president of the European Council and the prime ministers of NATO allies Spain and the Netherlands.

Biden held a separate meeting later with Sunak, in their first extended conversation since he took office last month.

‘We´re going to continue to support Ukraine as long as Russia continues their aggression,’ Biden said alongside Sunak, adding that he was ‘glad we’re on the same page’ in backing Ukraine.

On Tuesday, Russia pounded Ukrainian cities with dozens of missile strikes in its biggest barrage yet on the country’s energy facilities, which have been repeatedly struck as winter approaches.

‘The moment when the world came together at the G-20 to urge de-escalation, Russia continues to escalate in Ukraine, while we´re meeting,’ Biden said.