Scott Morrison has chewed the fat with US President Joe Biden at the G7 summit in Britain – but it wasn’t the meeting he expected.

Mr Morrison was invited as a guest at this year’s G7 Summit in Carbis Bay near Cornwall and was expected to meet Mr Biden in a bilateral setting.

But in a surprise twist, Mr Johnson was also present during the conversation, prompting some Australians to question whether Mr Morrison is on the outer with the new American leader.

Nikki Sava, a former advisor to prime minister John Howard, said it appeared Mr Johnson was called in to act as an ‘intermediary’ between the two leaders.

‘This seemed to me like it was Boris Johnson stepping in what seemed like it might be a little awkward meeting, given Morrison’s full-on support for [former US president Donald] Trump,’ she told ABC’s Insiders.

When Mr Morrison was asked why the scheduled ‘one-on-one’ meeting suddenly included a third party, the PM said it was a joint decision.

‘It was an opportunity that presented because we’re all here and so it was mutual,’ he said.

‘We were particularly keen to have the discussion with both parties.’

Several other theories have been floated since word spread that Mr Johnson crashed the meeting, including that he was there to keep conversations about climate change productive.

Mr Biden is an outspoken climate change advocate while Mr Morrison has taken a more lax approach, refusing to commit to a goal of net zero emissions by 2050. 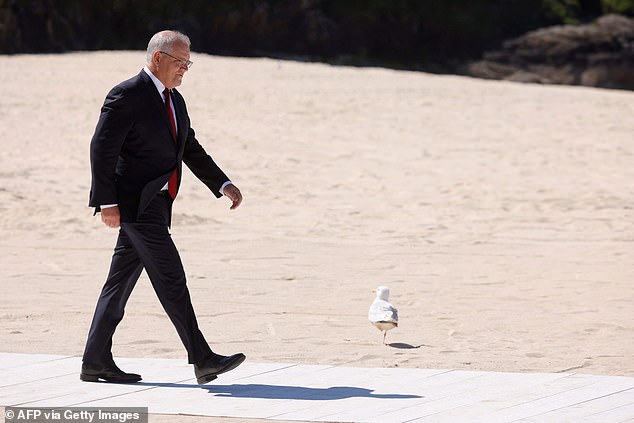 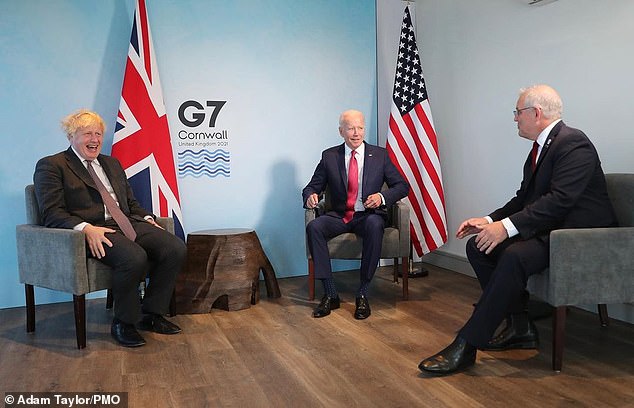 Mr Morrison said: ‘Australia has no greater friends than the United States and the United Kingdom’

Former Liberal opposition leader John Hewson suggested Mr Biden might ‘not be prepared to extend Morrison the privilege [of a one-on-one] given his indefensible irresponsibility and stubbornness on climate’.

Senior Labor frontbencher Penny Wong had a similar viewpoint, stating that she was disappointed the Prime Minister was unable to secure a one-on-one meeting with Mr Biden.

‘Mr Morrison’s stubborn refusal to sign up to net zero emissions has left him isolated and left Australia isolated,’ she said on Sunday.

‘I suggest Mr Morrison reflect on whether or not his stubborn refusal to sign up to net zero emissions along with so much of the rest of the world, is really delivering for Australia and for Australians.’

Mr Morrison is in Cornwall as a guest of leaders from some of the world’s richest countries and will have separate talks with Mr Johnson early this week in London. 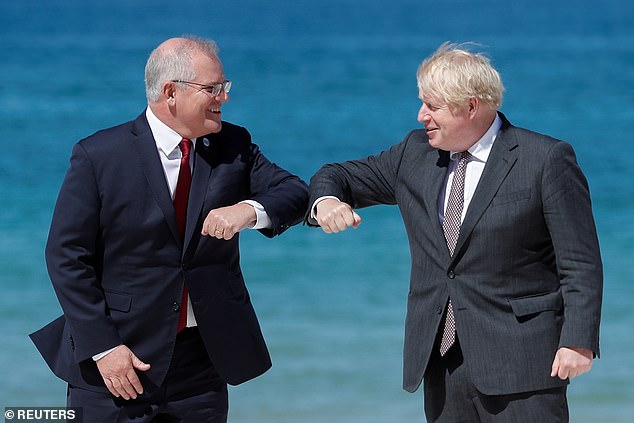 ‘It was a great opportunity for my first meeting with the President. I’ve known Boris for many years, and there was a very easy understanding amongst the three of us’ Mr Morrison said

Britain is also host to a global climate change conference later this year in Glasgow.

Greens leader Adam Bandt believes the only reason why Mr Morrison was invited to the G7 meeting is so they can give him a dressing down over Australia’s inaction on climate change.

‘Climate is a critical issue at this G7. It is the only game in town,’ Mr Bandt told ABC’s Insiders program on Sunday.

‘When they sit down to discuss climate, Scott Morrison will be sitting at the kids’ table and I think part of the reason he’s been invited to this summit is so the rest of the world can give Australia a dressing down on climate.’

Mr Morrison dismissed those claims, stating that climate change was not a point of discussion for the meeting and would instead be a topic of conversation at Monday’s G7 Plus sessions. 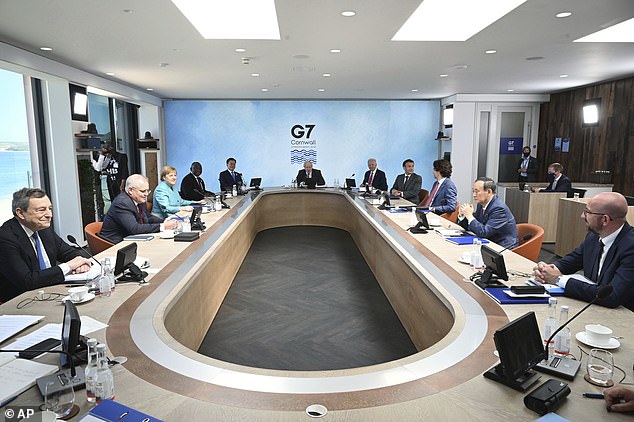 Instead, he and the other two leaders released a joint statement at the end of the 40-minute meeting, confirming they discussed issues of ‘mutual concern’ and indicating the topic of China was brought up.

‘They agreed that the strategic context in the Indo-Pacific was changing and that there was a strong rationale for deepening co-operation between the three governments,’ the statement read.

When asked if the US and Britain supported Australia’s handling of the conflict with China, the prime minister would not comment on specifics.

Instead, he reiterated that relations with both nations are ‘stronger than ever’.

Mr Morrison said: ‘Australia has no greater friends than the United States and the United Kingdom.

‘It was a great opportunity for my first meeting with the president. I’ve known Boris for many years, and there was a very easy understanding amongst the three of us.’ 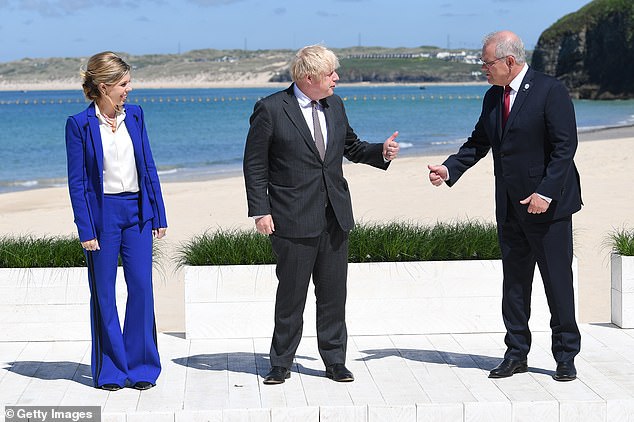 When asked if the United States and United Kingdom supported Australia’s handling of the conflict with China, the prime minister would not comment on specifics