Nathalie Emmanuel has revealed that she’s clashed with some directors who expect her to do nude scenes after stripping off for her Game Of Thrones role.

The actress, 32, who played Missandei until her brutal death in season eight, said there is a ‘perception’ she’ll be ‘open to do anything’ in her other projects.

Speaking on the Make It Reign podcast, Nathalie added that she’s sometimes challenged scripts when she’s ‘not comfortable’ with a scene and will only do what she feels ‘is necessary for that part’.

‘There was the perception I was open to do anything’: Nathalie Emmanuel has revealed she’s clashed with some directors who expect her to do nude scenes after her Game Of Thrones role

She said: ‘When I did Game of Thrones, I agreed to certain nude scenes or nudity within the show and the perception of that from other projects, when the role required nudity was that I was open to do anything because I did it on that one show.

‘But what people didn’t realise was that, I agreed to certain terms and specific things for that one particular project. And it didn’t necessarily apply to all projects.’

Nathalie continued that she’s been ‘challenged’ going for other roles because of her past nude scenes, with them expecting she’ll do them again.

She explained: ‘And I definitely had people challenge me and be like, “but this part requires that.” 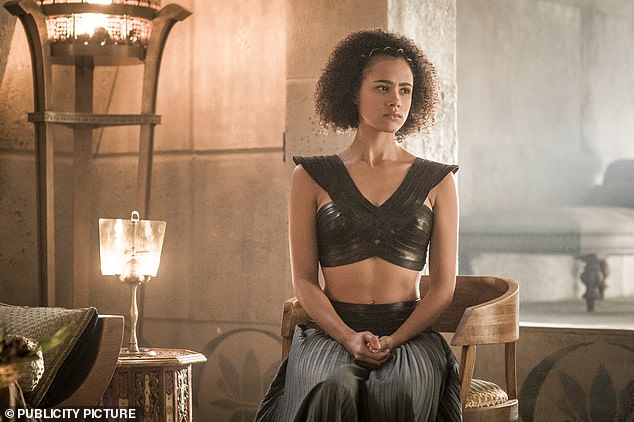 On screen: The actress, 32, played Missandei, who went from slave to Daenerys’s trusted advisor, until her brutal death in season eight (pictured in character on Game Of Thrones)

‘And I said, “well that’s fine. If you require that in the part, I don’t feel comfortable doing that level of nudity. I will do this amount, or I can do what I feel is necessary for that part.”

‘And frankly, if someone was insisting, “we need this nudity.” I would say, “thank you very much, I appreciate your interest, but that’s just not what I feel is necessary for this part”.’

Nathalie also spoke candidly about diversity in casting and how it’s ‘ridiculous’ to her that there can be ‘only one’ brown part’ in productions, adding that she’s proud of her character and how fans ‘fell in love with’ Missandei.

She said: ‘As a mixed black person, while I have all this privilege, because I’m a mixed person and have a lighter complexion, I know that I may or may not have had certain opportunities because of that privilege. 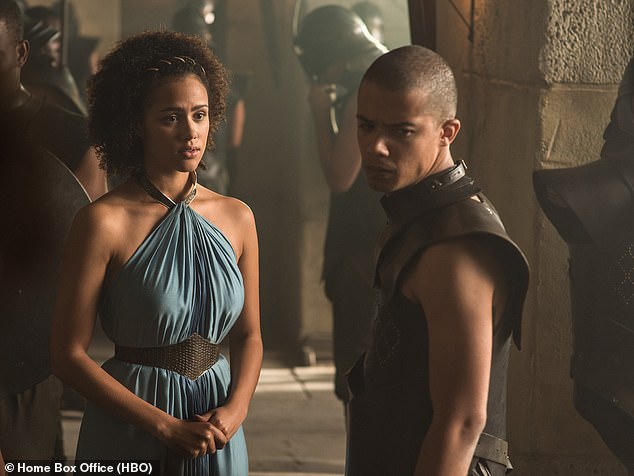 Speaking up: Nathalie also said that she’s challenged scripts when she’s ‘not comfortable’ with a scene and will only do what she feels ‘is necessary for that part’ (pictured as Missandei)

‘That’s something that I have had to educate myself about. I also have always existed in spaces that when I take up space in any production, it means something because we’re so used to just seeing our leads be white and our supporting leads be white.

‘There’s that call for diversity [now] and we’ve seen it, but the primary characters are usually white. And then they’re like, “oh that random character we can cast somebody brown for that.”

‘It’s like the brown part in everything. It’s this idea that there can only be one, which is so ridiculous to me.’

Nathalie, who is about to make her third appearance in The Fast and The Furious franchise, then spoke about her Game Of Thrones role saying that she believes Missandei’s death ‘sparked’ conversation on this ‘only one’ problem.

She continued: ‘But there is something about the fact that I was the only long running woman of colour in the show.

‘When she died, everyone was like, “she’s the only woman of colour in the show and we’ve got to invest and grow to love and learn about and she’s the only one!” 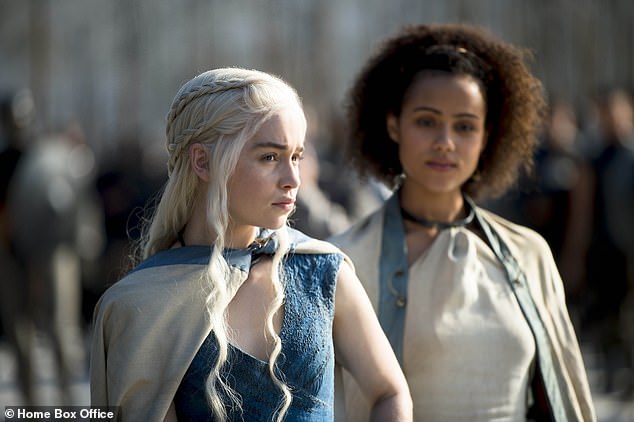 Fan favourite: Nathalie also spoke candidly about diversity in casting and gushed that she’s proud of her character and how fans really felt the impact of her death (pictured with Emilia Clarke as Daenerys)

‘I was really proud of the fact that her exit sparked this really important conversation, because it’s not just this show, it is many shows[that do not always have diversity in mind when casting, writing or producing].

Nathalie added that she’s ‘so proud and excited of everything’ she did in the hit show.

She added: ‘A lot of the storyline that I did have was not in the books and it was things that were created for me, and I thoroughly enjoyed bringing that person to life. The more I learned about her, the more I fell in love with her.

‘So it really is a demonstration of how successful it is when we give characters of colour that depth and that wider kind of context. 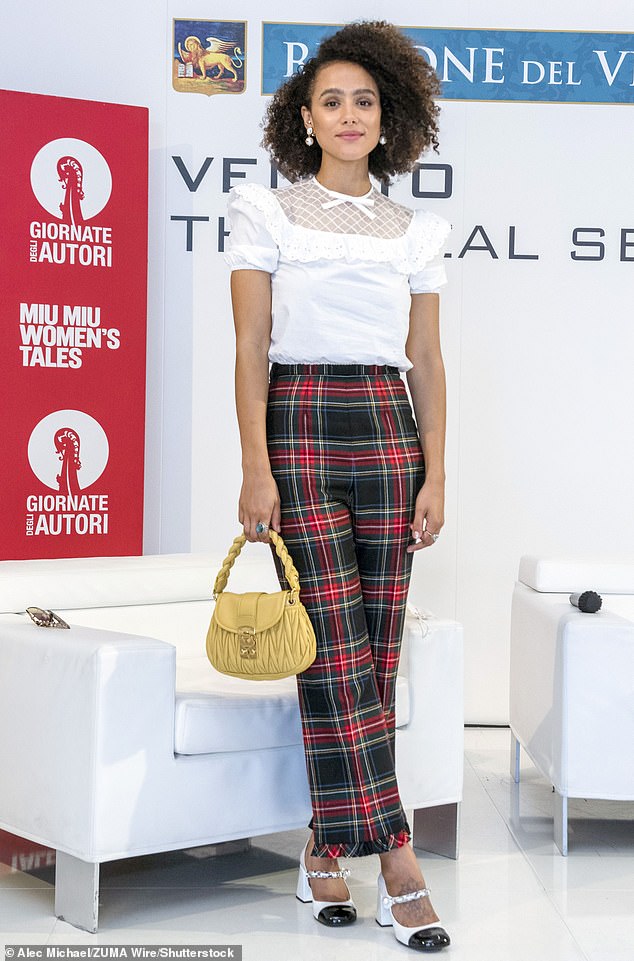 ‘The more I learned about her, the more I fell in love with her’: Nathalie spoke about her joy over playing Missandei and that the outcry over her character’s death shows ‘how successful’ it can be when ‘characters of colour are given depth’

‘It shows that because people were so devastated when she died, it was because they’ve fallen in love with this whole person who’s had a life.’

And reflecting on her childhood, Nathalie detailed how she’s was bullied at school and used to be very shy.

She told the podcast: ‘Teenage years for me were not great.. I got quite badly bullied at school for quite a few years and by the same group of people and it got to a point where I was quite isolated…

‘It got quite bad to the point where I stopped talking at school completely. Like I stopped engaging in classes. I stopped interacting.’

Nathalie added that she. was shy on Hollyoaks when she started out in acting but has changed lots over the years.

She said:’It was funny because I started in Hollyoaks when I was like 17 and I was so young and shy and when I speak to people that I worked with, they were like, “oh my gosh, she was so shy, she barely said anything, unless someone spoke to you,”

‘And they’re really shocked now when they meet me, they go, “oh you’re so outspoken and really confident.”

‘Because I’d come straight out of school and had been in that environment, that wasn’t so great where I felt incredibly isolated, sad and lonely at times.

‘So that kind of gave me insecurities about me and my self-worth of how I valued myself. So it was really amazing over the years to find that voice again and my confidence.’

Nathalie appears on the Make It Reign podcast, out on Tuesday. 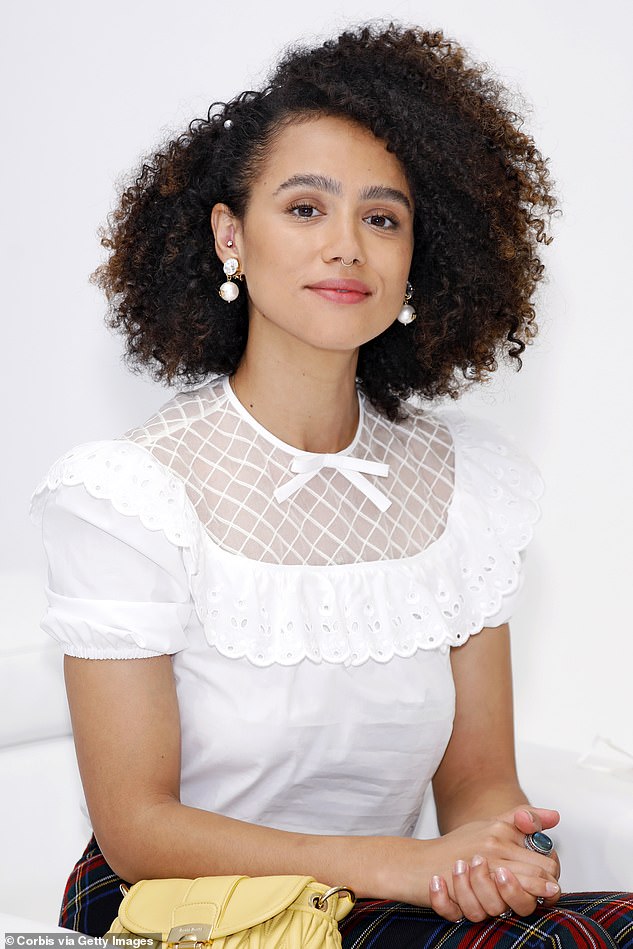 Honest: The star candidly reflected on being bullied as a youngster and starting out as an actress feeling very shy (pictured in September 2020)