Gangs of youths on a ‘Jeremy Kyle’ estate are being accused of repeatedly flouting coronavirus lockdown rules and ‘behaving like animals’, days after 50 residents on the same estate were videoed crowding round to watch a street brawl.

Shocking footage shows residents running out of their homes and gathering to watch the fight on the Page Hall estate in Sheffield, South Yorkshire, on Monday evening.

Residents on the road were seen appearing to break the government’s social distancing measures in order to watch the mayhem, sparked when two young boys began having a fight.

But residents say the fight is just one of a number of issues involving ‘gangs of people’ on the estate ignoring social distancing rules during the coronavirus lockdown.

One even accused residents on the estate of ‘behaving like animals’, while another said it was ‘better than having Jeremy Kyle show outside your front door’.

Officers were forced to break up the rabble as they watched the fight in the Page Hall estate in Sheffield, South Yorkshire, on Monday evening 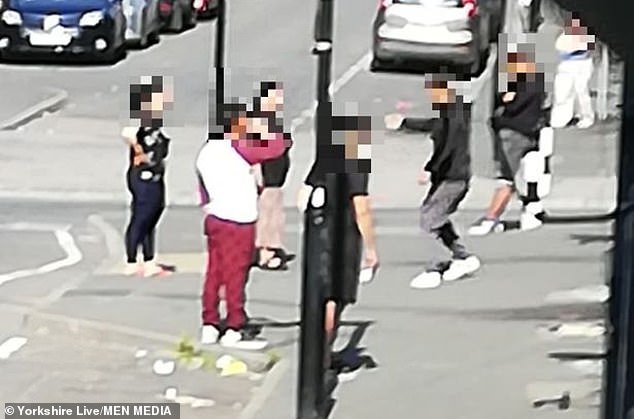 It has sparked ‘terrified’ residents on the estate to film the unlawful gatherings seen in the area over the past few weeks.

One woman, who did not want to be named, said something happens on the estate ‘every day’ with ‘gangs’ allegedly out at all hours.

The 36-year-old said: ‘It’s better than The Jeremy Kyle Show. Just open your front door and bang, you’ve got some kind of action.

‘It is unbelievably disgusting just how many of these are out and about just stood in gangs chatting while the kids are doing who knows what.

‘They just don’t get how serious this pandemic is.’

She added: ‘These people that are breaking the rules of lockdown are giving us all a bad name.

The concerned resident said enduring the lockdown in Page Hall and witnessing unruly scenes outside her house has been a ‘nightmare’.

Dad-of-three Jawad Saleem says he regularly sees a group of youths kick a football about right outside his home.

He said a member of the gang even flicked their middle finger at him on one occasion, which he captured on camera. 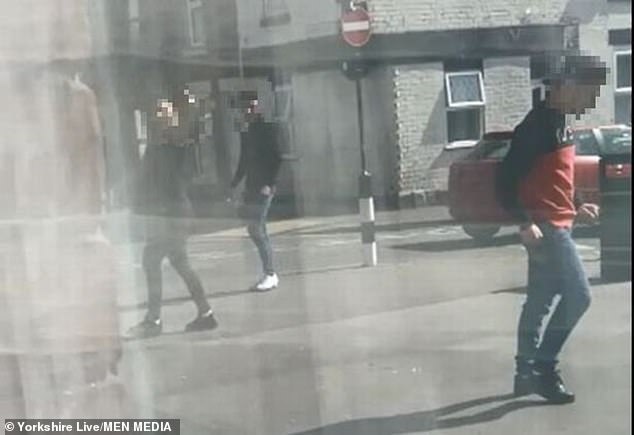 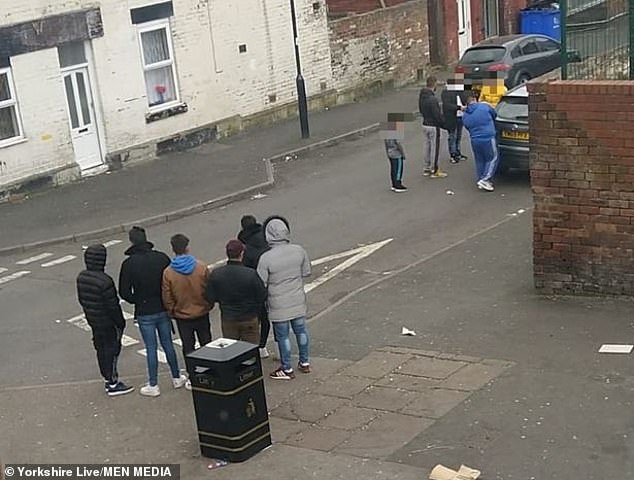 One woman, who did not want to be named, said something is happening in Page Hall ‘every day’ with ‘gangs’ allegedly out at all hours. Pictured: Groups of people appear to break social distancing rules in the streets of the Page Hall estate, Sheffield

On Monday evening, he said he saw two boys fighting in Popple Street, on the Page Hall estate, before people spilled out of their homes to get involved in the melee.

Mr Saleem, who is ‘desperate’ to move his family away from the estate, said: ‘It’s like a show for them. They are not following the rules and they are hiding from police when they’re out on their patrols.

‘I’ve lived here three-and-a-half years and I have complained to the authorities. I’ve been recording videos all that time and I’m used to it being like this but I want to move from here.’

This is not the first time residents in the Page Hall and Fir Vale area of Sheffield have faced criticism for flouting the rules of the coronavirus lockdown.

Last month, former Burngreave councillor Ibrar Hussain says the government’s social distancing message is not ‘getting across’ to people living there.

He also called for police to take tougher action. 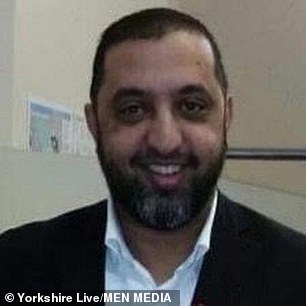 Mr Hussain said in April: ‘Although the soft approach is good at times you have to be firmer because it’s unfair for people who live there.

‘They are frustrated and angry because these crowds could spread the virus.

‘Their lives have changed and their quality of life has been diminished in this crisis and if the rules are not observed then God help us.

‘We have got to look after each other and caring for each other’s safety is paramount. The police are the only ones who can enforce this and they need to be very firm.’

After Monday evening’s commotion, South Yorkshire Police insisted its officers have been ‘working hard to engage with people living in the Page Hall area about the importance of adhering to social distancing’.

The force insists only a small minority of people are flouting the restrictions.

A spokeswoman for the force said: ‘Officers have been consistently carrying out enhanced patrols, having conversations with residents and businesses and dispersing people where appropriate.

‘We continue to have a high-visibility presence in the area and have also looked at different ways to communicate the restrictions, including digital screens and leaflets being delivered to homes.

‘Whilst there have been some challenges, the majority of residents are complying with the restrictions and have been taking their responsibility to protect others seriously.

‘There is however, a small number who continue to flout restrictions. In these instances, we have moved to enforcement to encourage compliance. 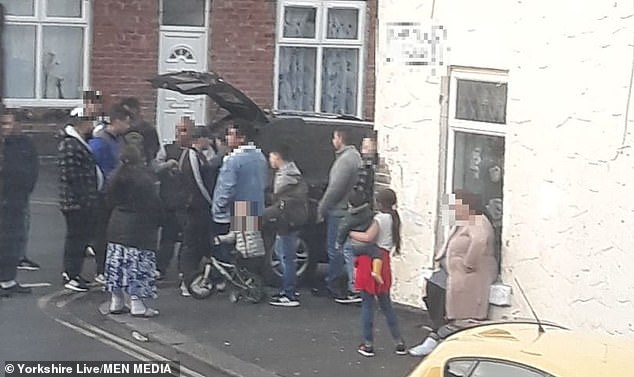 The concerned resident said enduring the lockdown in Page Hall and witnessing unruly scenes outside her house has been a ‘nightmare’. Pictured: Groups of people appear to break social distancing rules in the streets of the Page Hall estate, Sheffield

‘We have issued a number of Fixed Penalty Notices in the Page Hall area, and have been given as a response to a small minority of people who have continued to breach restrictions despite the best efforts of our officers.’

A 20-year-old woman was injured in Monday’s fight.

South Yorkshire Police has confirmed its is investigating.

According to the force, around 50 people had to be dispersed and ordered to return to their homes by officers.

A spokeswoman for the police said: ‘We received a call at 5.33pm on May 11 to reports of fighting on Popple Street in Sheffield.

‘It is reported that a group of around 50 people were in the street causing disorder. Upon officers’ arrival, the group was dispersed and sent back to their properties.

‘An ambulance was called for a 20-year-old woman, she was discharged on scene with minor injuries. Enquiries are on-going into an investigation of assault.’