Violent gangs who blow up ATMs and ram-raid shops to make off with cash are devastating Britain’s rural communities.

Shocking figures reveal that around 1,000 cash machines were smashed or hit by explosions last year – with smaller communities being worst hit.

This number has doubled in four years according to the report by Link, which oversees the UK’s ATM network.

The report, which exposes for the first time the extent of the emerging epidemic, also suggests it can take as long as four months to replace the broken machines.

Some machines are never replaced because business owners fear another attack – leaving those who live nearby without ready access to cash, often in isolated locations.

Link spokesman Graham Mott said: ‘These attacks cause untold amounts of destruction and can come as a huge shock to small villages which are not used to high levels of crime.’ He added: ‘ATMs are a vital resource in remote and rural communities and must be protected.’

The raids come as figures show that ten free ATMs are vanishing from Britain’s streets every day – sparking fears that thousands of people could be cut off from access to their cash.

A total of 5,000 cash machines shut or started charging customers between January last year and this April, according to figures from Link. Among these, 151 are in isolated areas more than a kilometre from another free ATM, meaning vulnerable or elderly people cannot access money easily. 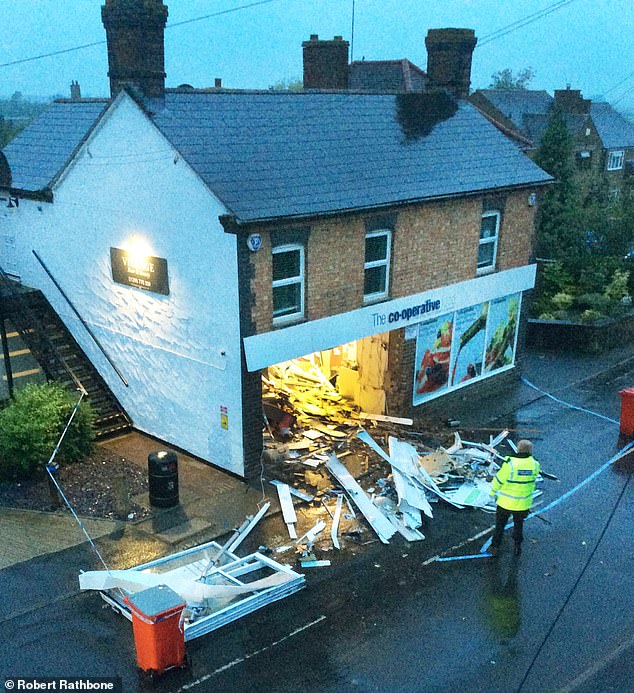 The Co-op in the village of Fenny Compton, Warwickshire, was hit in an early-hours raid on Tuesday by a five-strong gang who brought a low-loader and a pick-up truck along to help them remove the ATM

This extraordinary rural crimewave often involves criminals stealing diggers from farms and construction sites to smash through brick walls and shop fronts to steal an entire ATM. The equipment is then abandoned or set on fire to destroy evidence.

Three in ten of the attacks also involve gas explosions, as raiders create a gas leak and then blow off the front of the shop to steal the ATM – or explode the machine itself to access the money.

He said: ‘If you commit a robbery and set off an alarm… you’re going to give yourself the best possible chance before police turn up – and that’s in rural areas.’

Nicky Morgan, chairman of the Treasury Committee, said: ‘Cash machines are a lifeline for many communities. These thoughtless acts that are carried out are making life difficult for the people within their own communities.’

The Link report leaked to Money Mail said: ‘After each attack, the ATM operator will do an evaluation and assess the likelihood of repeat attacks.

It added: ‘In most cases the ATM will be replaced… However, this is not always the case and for smaller independent stores in particular the store owner may decide the risks are no longer worth the benefits of having an ATM.’

Most cash machine raids are carried out by organised gangs, which can commit multiple robberies before they are caught. The report shows that raids on convenience stores account for half of attacks, followed by petrol stations, Post Offices and then supermarkets.

However, fewer than a third of all raids result in theft, with the average amount taken in a successful attack around £38,000.

Smashed apart by a stolen JCB

A village grocery store front was this week demolished by robbers who ram-raided the wall with a stolen digger to steal the shop’s ATM.

The Co-op in the village of Fenny Compton, Warwickshire, was hit in an early-hours raid on Tuesday by a five-strong gang who brought a low-loader and a pick-up truck along to help them remove the ATM.

The gang arrived at 2.38am and took just ten minutes to make off with the cash machine. One villager said she heard squealing tyres and a revving engine at the time of the attack and woke her husband to alert him.

Villagers yesterday complained it was an ‘easy target’ for serious crime due to a lack of police presence.

It is understood that the JCB digger used was stolen from a nearby farm.

More than eight months after it was destroyed by cash machine raiders, residents of Spondon, Derby, are still without a post office.

Criminals tried to steal the ATM by using gas to create an explosion in October last year, leaving the building in tatters. A resident of the village described it as ‘feeling like a bomb had gone off’.

No arrests have been made – and until the store reopens, residents are reliant on a mobile post office van that operates twice a week. The next nearest branch is around two miles away. Great-grandmother Sheila Shardlow, 81, called the destruction of the village post office a ‘real blow’ for the community.

She added: ‘My daughter, grandchildren and great grandchildren live in America and I would use it frequently to send them things… We all hope it reopens soon, but we are not holding our breath.’

A Post Office spokesman said it is ‘committed’ to reinstating a full-time service in the area.

Cash machine crime costs the UK more than £150 million a year, when money stolen, repairs and the potential impact on local economies, is accounted for, according to Cardtronics, the UK’s largest independent cash machine provider.

Sarah Staff, head of SaferCash at the British Security Industry Association, said the most affected regions are the East, south-east and Northern Ireland.

But these crimes are not just a UK phenomenon – they are a growing problem across the whole of Europe. In other countries with high numbers of attacks such as Holland and Sweden, residents have called for ATMs to be removed because of the risks.

Experts say more is already being done to protect cash machines, such as marking stolen money with ink dye or installing trackers and enhanced alarms.

And Ron Delnevo, Europe executive director at the ATM Industry Association, is calling for harsher sentences for those convicted of cash machine crime.

He said: ‘These criminals are putting people’s lives at risk… they could easily kill someone out for a late-night walk or who lives above the shop.’