Gangsters in Strangeways tried to get TV boxsets smuggled into them by drone so they could binge-watch The Sopranos behind bars.

Traffickers are using the latest technology – including virtual reality goggles and bespoke unmanned aircraft – to satisfy the demand for drugs and entertainment from bored inmates.

Episodes of the cult series along with Sons of Anarchy were downloaded onto USB sticks and included in a haul of contraband attached to a drone in one smuggling bid.

The DJI Phantom was also carrying special software which would have allowed the shows to be watched on a Playstation 2, which prisoners are allowed to use at HMP Manchester.

Drones were seized after criminals used them to transport drugs, phones and boxsets into Strangeways

Also in the illicit load were Spice and cannabis resin – packaged so they could be hidden inside the body – along with a dozen sim cards and seven tiny phones capable of beating metal detectors.

In jail drugs fetch five times as much as they do on the street – so the Spice and cannabis was worth nearly £25,000 alone.

But the extraordinary plot failed after the drone became caught in security netting at the Victorian jail, which houses some of the country’s most high-security prisoners. 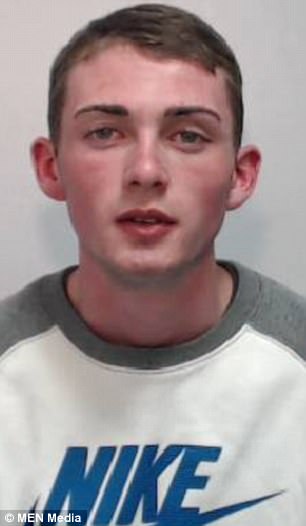 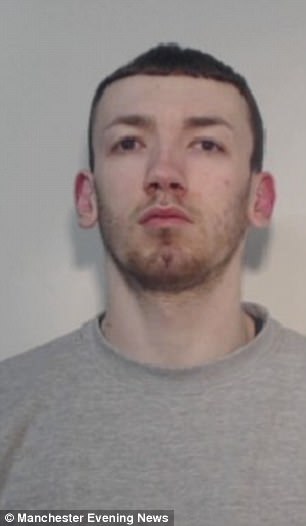 Drone pilot Damon Keegan, right, from Crumpsall was jailed for three years and four months for his role in the delivery scheme which Dean Rawley-Bell, left, was also involved in

The boxset drone mission was one of a series of night-flights that set off from Crumpsall in an underworld delivery service.

Eight days later an identical drone was intercepted by prison officers and found to contain drugs worth £36,650 behind bars.

Details emerged as drone pilot Damon Keegan, 25, from Crumpsall was sentenced at Manchester Crown Court to three years and four months in jail.

He used a £1,000 DJI Phantom model in both failed smuggling bids, back in June, and was linked by fingerprint and communications evidence.

Keegan was part of a tight-knit circle of drone smugglers and made deliveries to prisons across the north-west.

A cache of hi-tech equipment was recovered from his home in August. 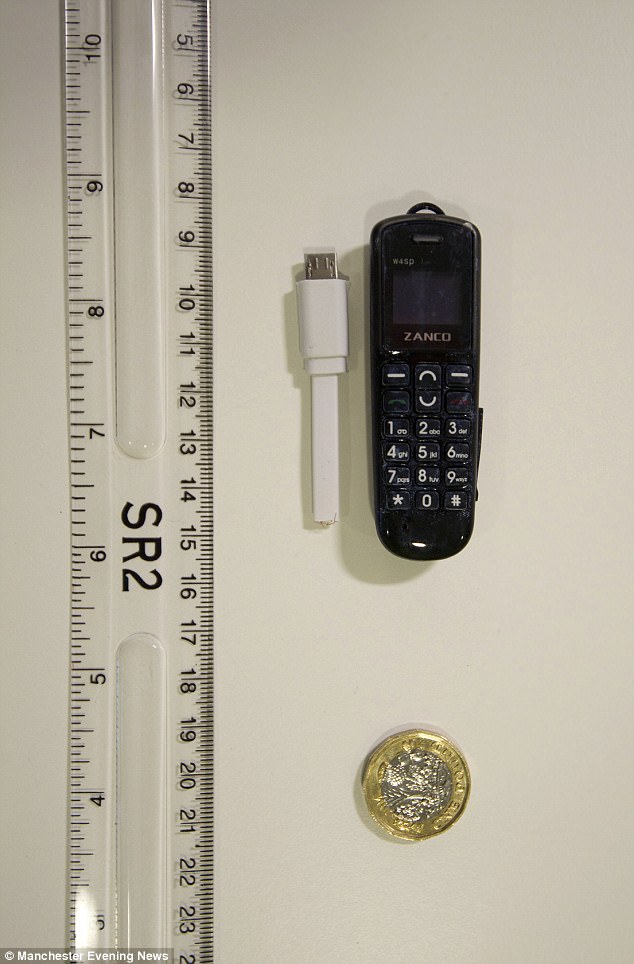 Back then police searched a house in Droylsden looking for him after they were informed by a relative his life could be under threat from Liverpool gangsters.

Officers recovered a bespoke drone, and a pair of goggles which allow the pilot to see what the drone sees via a live camera, from the property.

There was also a drone carrying harness, electronic devices, empty balloons and a balloon filled with what is suspected to have been Spice.

A few days after those items were seized, Keegan was linked to a suspected smuggling bid.

Police chased a stolen high-powered Volkswagen Golf R at junction 1 of the M65 in East Lancashire. 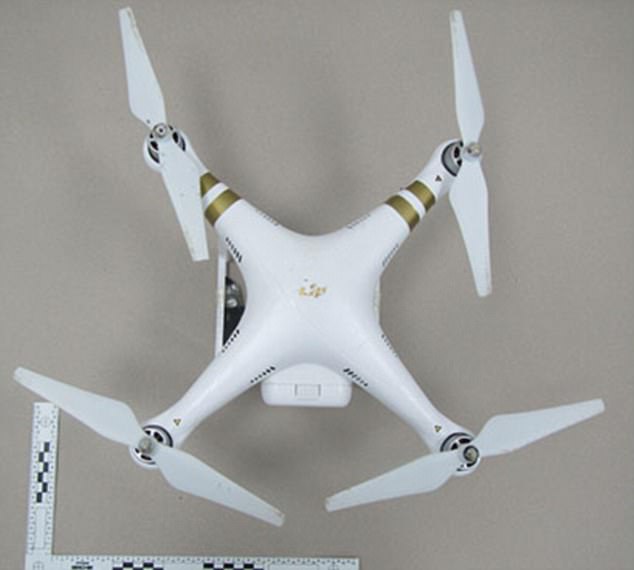 The car was abandoned and the occupants fled – leaving behind sets of number plates in the boot, bolt cutters, and gloves with Keegan’s DNA on, as well as large cellophane wrapped packages containing phones and drugs. Inside a rucksack on the backseat was a large drone.

Police believe Keegan was in the area to make another drone delivery to one of the local prisons, possibly HMP Garth.

He was finally arrested on November 28th and when interviewed admitted making drone deliveries to prisons across the region.

Keegan was jailed for house burglary in 2015 in Stockport. As he was chased by a neighbour he ran into the path of a car, sustaining serious injuries to his leg which have left him with a permanent limp. 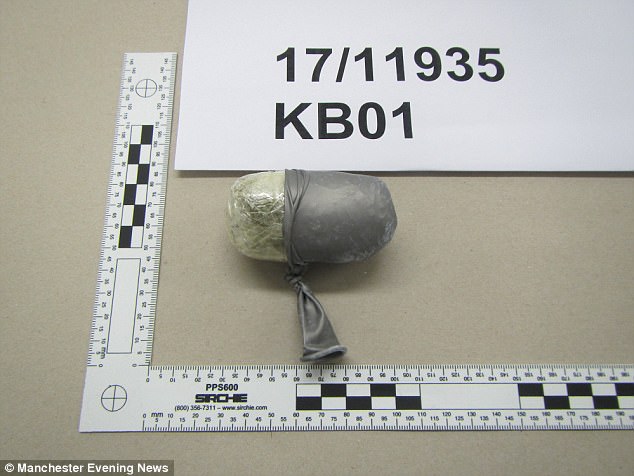 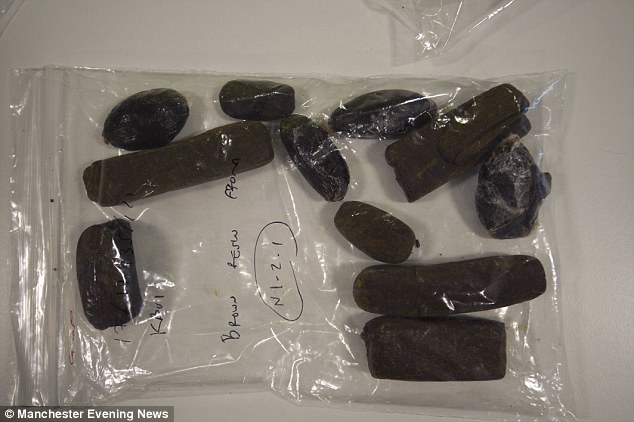 During his time in Strangeways – between October 2015 and March 2017 – it was suspected he was was heavily involved in organising deliveries of contraband into the prison by remote drone, as he was seen tampering with cell window grilles and sticking his hand outside to make collections.

During the early hours of April 3 last year, staff at HMP Manchester saw a drone with a large package attached to it.

It rocked from side to side causing the package to swing as it hovered outside a cell.

Keegan reached out and grabbed the package from inside. But a search of his room found nothing – it is believed the contents of the packages had already been distributed.

Keegan is known to be a pal of Dean Rawley-Bell, 22, who was jailed exactly a year ago for four years and eight months for flying drones into Strangeways.

The aircraft can fly up to three miles away from the pilot, who is able to locate themselves a safe distance from prisons. 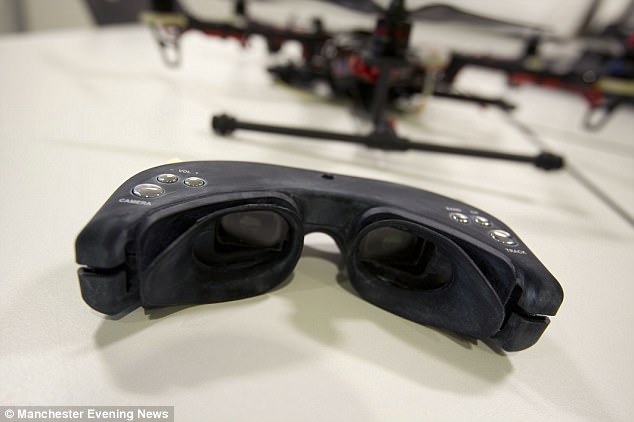 Some manufacturers have installed geofencing software that stops flight into restricted airspace, but bespoke-made drones are unlikely to have this safety measure.

Such operations are linked to organised crime gangs due to the lucrative nature of the cargo. Items are designed for stealth.

The Zanco phones recovered are 2 ¾ inches x ¾ inch in size and small enough to also be secreted anally. There are hardly any metal components inside them, allowing the handsets to beat metal detectors.

Despite costing just £20 when sold in shops or on the internet, the phones are bought and sold for anything between £350 – £500 each.

Charging cables on the phones are cut short and exposed wires are linked to electrical items in cells, like televisions, to charge.

Once inside prison, the phones can be used for planning serious crime, witness intimidation, terrorism and potential escape attempts.

And they are used to set up drone flights and more traditional smuggling attempts – which include using visitors to bring in items or arranging for tennis balls loaded with drugs to be thrown over compound walls.

Drug deals are typically shaped to be secreted anally – wrapped in cling film, condoms or balloons to aid in the insertion. 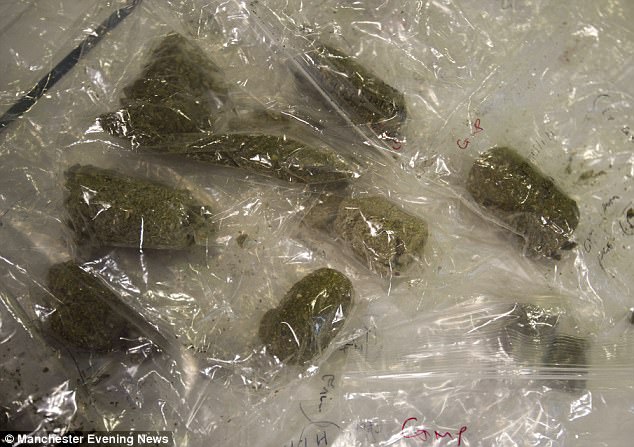 ‘He knew that trafficking drugs and phones into prisons can be very lucrative and thought that by using drones he wouldn’t get arrested. There are dangerous side effects of taking synthetic cannabinoids which put both prisoners and staff at risk. Bullying also often takes place between prisoners who run up large drugs debts.

‘The mini mobile phones he attempted to smuggle in can be used to facilitate serious crime, witness intimidation and planning of escapes.

‘GMP’s continued partnership with HMP Manchester is targeting organised crime on both sides of the prison walls.’

He was jailed for three years and four months.

‘When mobile phones and drugs are conveyed into prison, prison discipline breaks down. You know it because you have spent quite a lot of time in prison yourself.

‘This was not a one off. This was repeated activity. You knew in general terms what was being conveyed into prison. You no doubt received financial reward. Because you have been an inmate you knew what the consequences were.’