Gannon Stauch’s stepmom has been caught allegedly plotting to escape from prison, where she is currently being held charged with the brutal murder of the 11-year-old boy.

Letecia Stauch, 36, has been charged with one count of solicitation to commit escape after she planned to break out of El Paso County Jail in Colorado Springs, according to court records.

The suspected killer had planned to use a broom handle to bust the cell window and had measured herself to check she could fit through it to escape, records show.

Stauch, who faces first-degree murder charges over Gannon’s slaying, had allegedly enlisted the help of a fellow inmate and offered her money in exchange for helping her.

Stauch was arrested and charged back in early March with the first-degree murder of her stepson Gannon, after he disappeared in January, before his body turned up in Florida late-March. 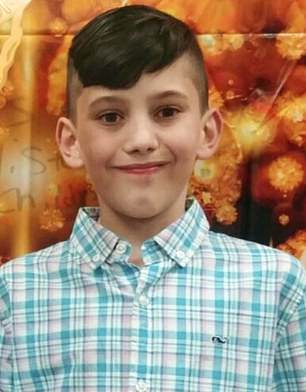 Gannon Stauch’s stepmom Letecia (left) has been caught allegedly plotting to escape from prison, where she is currently being held charged with the brutal murder of the 11-year-old boy (right)

According to court records, Stauch had been plotting her prison break for early May.

She allegedly told the other inmate in two notes – which were partly written in code – that a family member had deposited $75,000 in a bank account for her defense that she would share with her accomplice in exchange for her help.

Staunch allegedly wrote that she would ‘much rather use [the money] to survive, if you know what I mean’ and told the inmate: ‘You have my word to make sure we are MIA. I got us covered.’

The suspected murderer also wrote that she had measured herself so she was confident she would fit through the window once it was broken.

Stauch was already classed as a flight risk and was being kept in segregation from other inmates, spending just one hour a day out of her cell in free time that she must spend alone.

Because of this, she reportedly needed the help of the other inmate to get her the broom handle. 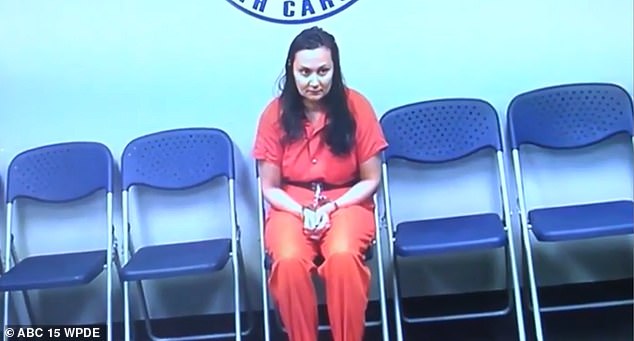 Her escape plan was foiled when her accomplice divulged the plot to jail deputies and handed over notes Stauch allegedly sent her asking for her help.

The inmate, who described herself as ‘Italian and kind of the bad boy,’ told investigators she wanted no part of Stauch’s plan, the records state.

She said ‘she knew about Ms. Stauch’s charges and she doesn’t want to be involved or have anything to do with her,’ the affidavit says.

A search of her cell then uncovered a letter Stauch had penned for her daughter telling her ‘if something comes up on the news like she is no longer in the jail or is missing to not be afraid,’ the court records state.

She will appear in court on the new charges Friday.

Stauch has been charged with first-degree murder, child abuse resulting in death, tampering with a deceased human body and tampering with evidence over the killing of 11-year-old Gannon.

Gannon went missing from his home in Colorado Springs on January 27, and was reported missing by Stauch. 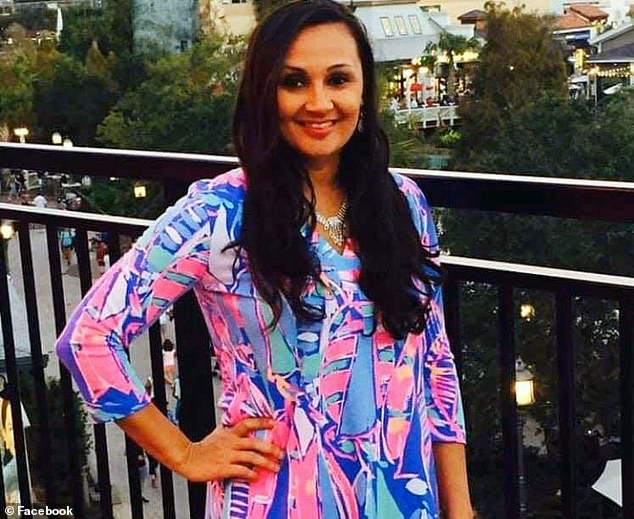 Stauch (pictured) enlisted the help of a fellow inmate and offered her money in exchange for helping her, court records state. The stepmom is accused of hitting Gannon with a blunt object, stabbing and shooting him before dumping his body in a suitcase 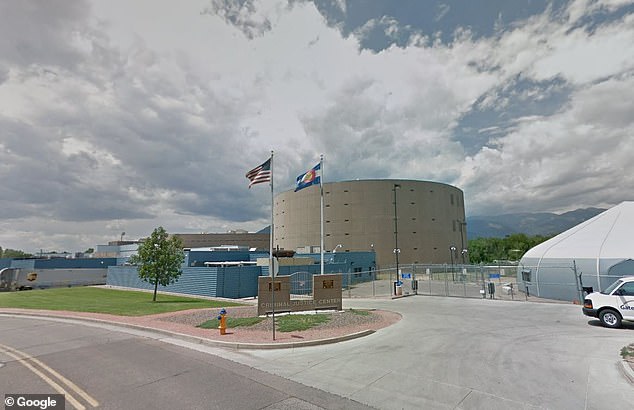 On March 2, Stauch was arrested in South Carolina and extradited to Colorado where she was charged with the little boy’s murder.

Gannon’s body was then discovered on March 20 1,400 miles away under a bridge in Pace, Florida by construction workers under the overpass.

A preliminary examination of his body revealed the little boy was hit by a blunt object, stabbed and then shot by his killer, before his body was stuffed in a suitcase and thrown over the side of a Florida freeway.

In a police affidavit leaked in April, authorities claimed that Stauch killed her step-son in his bedroom on January 27 – the day he disappeared – and then disposed of his body the following day.

The 32 page document states that blood was found in Gannon’s bedroom as well as in Stauch’s car.

‘Physical evidence recovered from the residence and inside Gannon’s bedroom supports that a violent event occurred in his bedroom, which caused bloodshed, including blood spatter on the walls, and enough blood loss to stain his mattress, soak through the carpet, the carpet pad, and stain the concrete below his bed,’ the affidavit states.

Blood was also found in and on Stauch’s Volkswagen Tiguan SUV, which authorities believed was used to dispose of the boy’s body the following day off a highway in Douglas County, Colorado.

It also states that the stepmom ‘lied to investigators on multiple occasions’ during their search for the missing boy and displayed ‘abnormal behavior’ when she rented a car that was not her usual mode of transportation. 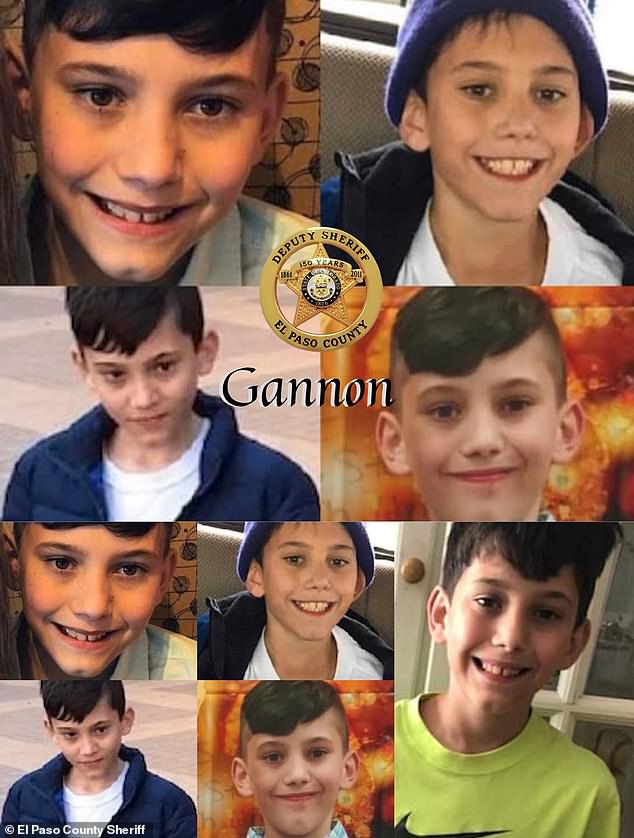 Gannon (pictured) disappeared in Colorado Springs in January. His body was found on March 20 1,400 miles away in Florida

Jan. 30: Case is upgraded to a missing and endangered child’s case due to his age, need for medication, winter weather and the length of time he’s been missing

Jan. 31: Letecia Stauch gives interview to KKTV saying deputies had threatened to shoot her and put her 17-year-old daughter in handcuffs

Feb. 4: Neighbor Roderrick Drayton shares surveillance video showing what appears to be Letecia returning home at 2.19pm without Gannon in her pickup truck; claims boy’s father broke down in tears when he saw the video

Feb. 11: Letecia Stauch releases statement to Fox 31 claiming Gannon was in her truck on Jan. 27 and that later left with a ‘friend’

Feb. 21: Ground search for Gannon is halted by investigation continues

Feb 28: Planned search for Gannon is called off without explanation

Mar 2 Letecia Stauch is arrested in connection to the case. Stauch was charged with murder of a child under 12 years of age by a person in a position of trust, child abuse resulting in death and tampering with a dead body. Authorities announce that they don’t believe Gannon is alive, but they haven’t found his body. The investigation is ongoing

March 18: Remains on a boy are found in Pace, Florida

April 3: Leaked affidavit claims Letecia killed Gannon in his bedroom on January 27 and disposed of his body the next day. It includes photos of Gannon’s room, mattress and walls covered in blood splatters. It also states Letecia ‘lied to investigators on multiple occasions’

May 5: Court records reveal Letecia has been charged with one count of solicitation to commit escape after she planned to break out of El Paso County Jail in Colorado Springs