Sellers are knocking more off property asking prices in a bid to get homes sold in what is increasingly becoming a buyer’s market, new data suggests.

On average, the gap from asking price to selling price across UK cities is up from 3.3 per cent in 2018 to 3.9 per cent, according to Zoopla.

The difference between asking and achieved prices are increasing off a low base across almost all cities, with the exception of Leicester, indicating cautious buyers are negotiating harder on price.

However, the headline figure masks a gap between major regional cities where markets are more robust and London, where home sellers struggle to meet the listing price, the property website says.

Overall, UK city house prices increased by 1.7 per cent over the 12 months to April 2019 as growth across UK cities continues to slow, registering the smallest annual growth since 1996.

While the growth is now not contained to southern England as cities including Manchester, Nottingham and Leicester have registered a slowdown in price growth, the deceleration is still most noticeable in the South.

Cities including Portsmouth, Bournemouth, Bristol and Southampton have all registered price inflation at, or below, 2.5 per cent.

There were also six cities whose average discounts were reported as above the current national average, including Newcastle and Liverpool. 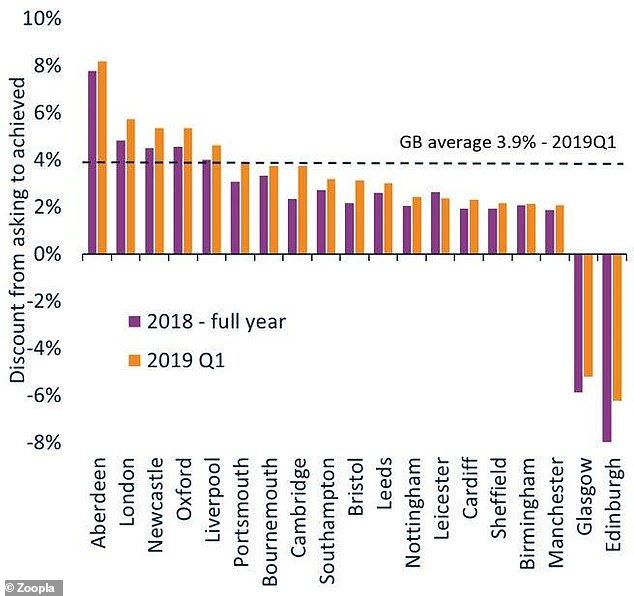 Slump: The table reveals the discount from asking price to selling price in cities around the UK

This pattern was not universal, however, as two Scottish cities registered average sale prices as higher than average asking prices.

Properties in Edinburgh sold for 6.3 per cent over their listing price while homes in Glasgow shifted for 5.2 per cent more than asking price.

Glasgow also leads on house price growth at 5.1 per cent, however, this is the lowest growth rate of the best performing city since 2012.

A large factor of this anomaly is that many homes marketed in Scotland are listed as ‘offers over’ the asking price.

Not all Scottish cities are flourishing in the property market though as Aberdeen registered the highest year on year discount at over 8 per cent.

This is consistent with the decrease in demand for housing in the city due to the collapse in the oil price since 2015.

‘Sellers are having to accept slightly higher discounts to the asking price in order to achieve a sale.

‘This is a natural response to weaker market conditions and buyers are starting to negotiate harder on price.’

The average gap from asking price to selling price in London now sits at 5.7 per cent – jumping up from 4.8 per cent in 2018. 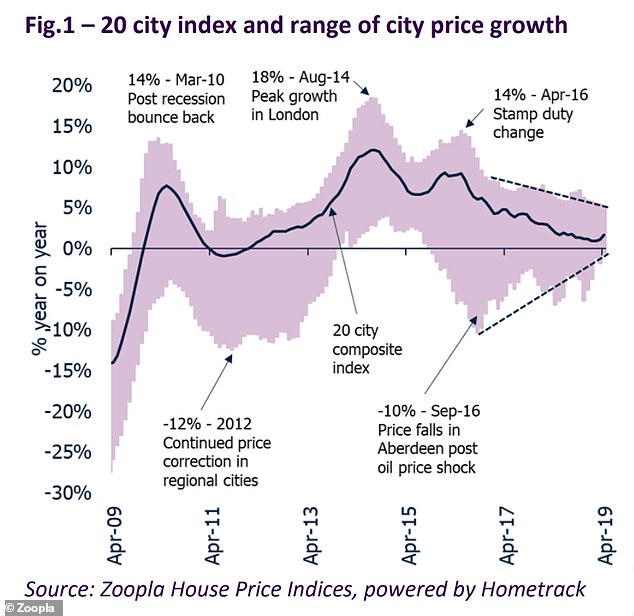 Inner London areas have seen the biggest level of price falls where average discounts are highest at 7.6 per cent with buyers in areas such as Kensington & Chelsea continuing to achieve double digit discounts.

Meanwhile, in outer London and commuter locations, the gap is much lower – averaging out at 5.1 per cent.

Donnell added: ‘Market conditions remain weak in London and the level of discounting continues to increase.

‘We expect the price adjustment in London to continue although we do expect sales volumes to start to tick upwards.

‘The slowdown in the rate of price growth is set to extend further across the south of England while we expect continued above average house price growth in regional cities where employment levels continues to grow, and affordability is attractive.’ 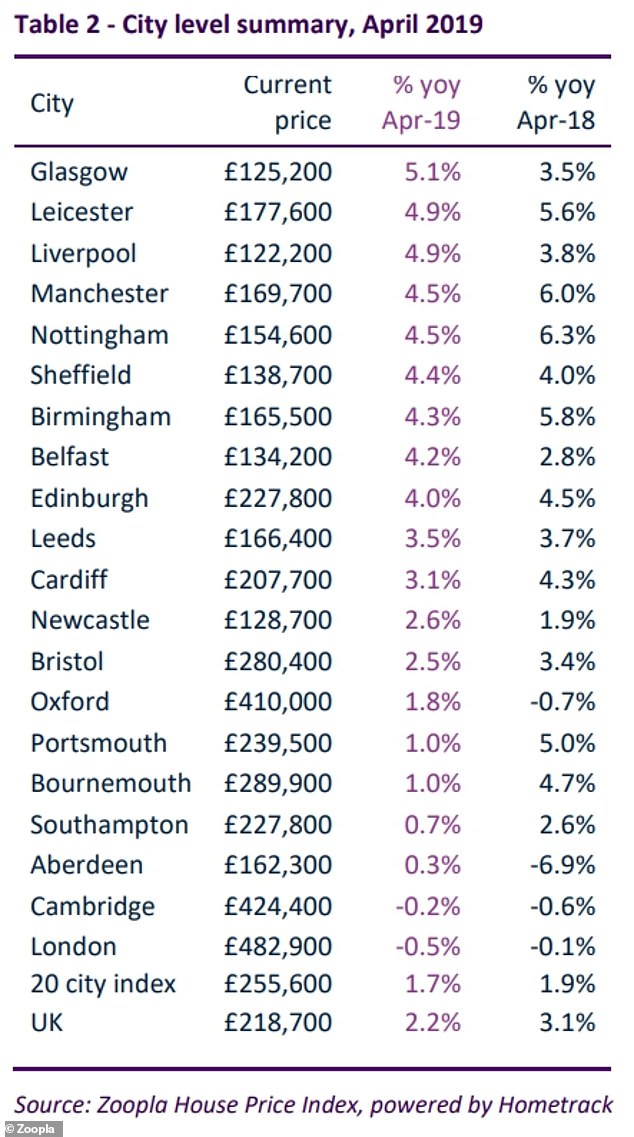