A sports commentator is coming under fire for laughing after a female photographer was knocked unconscious when a University of Georgia football player ran straight into her during a game.

Georgia running back Brian Herrien ran out of bounds accidentally knocking over  photographer Chamberlain Smith from the University of Georgia, who immediately fell to the floor and lost consciousness. 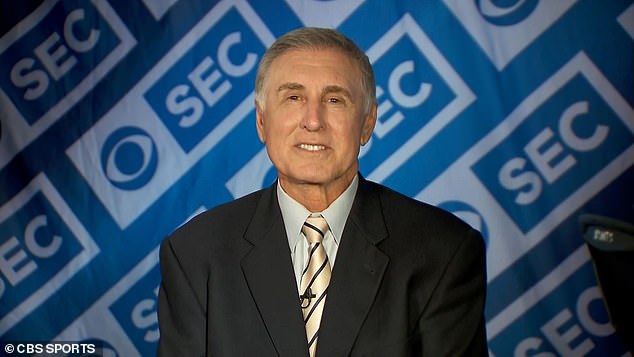 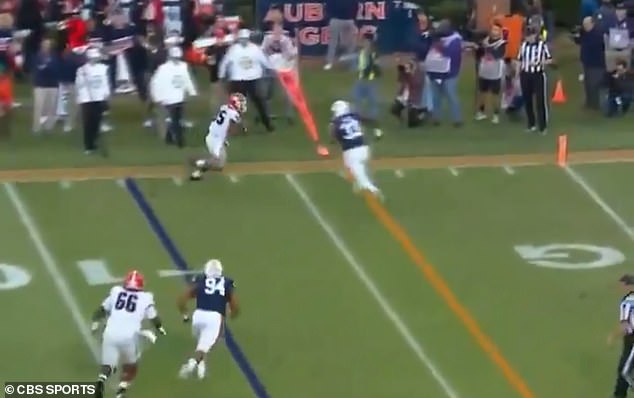 University of Georgia running back Brian Herrien (top red helmet) is seen barreling toward the sidelines, but about to be taken out of bounds in a game against Auburn University 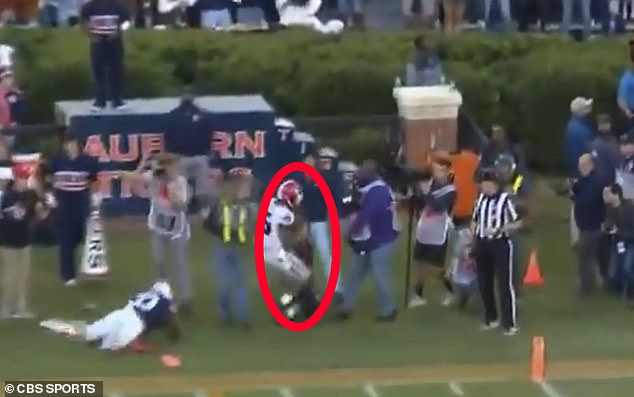 A sideline photographer for the University of Georgia, Chamberlain Smith, was tackled by the team’s running back. Smith was briefly unconscious on the field, but quickly recovered and was released from a hospital

Danielson could be heard chuckling at what had just happened but appeared to be more concerned about the players than the injured photographer.

‘Britt gets up, he’s fine. Herrien’s fine,’ Danielson says during his commentary.

‘The person Herrien ran into is not,’ his broadcast partner Brad Nessler points out.

Play was stopped as medical staff and other officials assisted the Smith.

Herrien stood over her with concern as medical staff quickly arrived to check on her.

Smith was placed on a stretcher and her eyes seemed to be open, although her right eye was bruised. 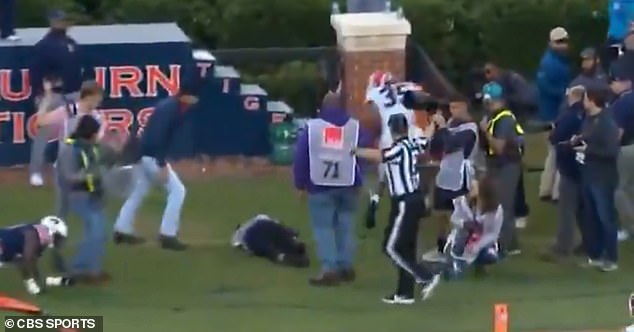 Those watching the game commented on social media at Danielson’s lack of tact.

‘Yo. Gary Danielson. For real? Do you not have any sympathy for another human being who is in serious pain and/or seriously injured? What about this poor girl’s suffering is funny, exactly? You owe Chamberlain Smith an apology for laughing at her injury,’ wrote one person.

‘Hey @CBSSports your coverage (& especially Gary Danielson’s treatment) of the photographer injury at the #UGAvsAUB game today was embarrassing. Be respectful to the woman next time. I often wonder if Danielson is watching the same game as the rest of us. Do something, please,’ added another.

Another twitter user added: ‘@cbs take note Gary Danielson is an idiot. He is a terrible sportscaster, often gets things wrong and is always negative. Today he showed total disregard for a young lady injured through no fault of her own and then wondered if it was her fault. #firegarydanielson’ 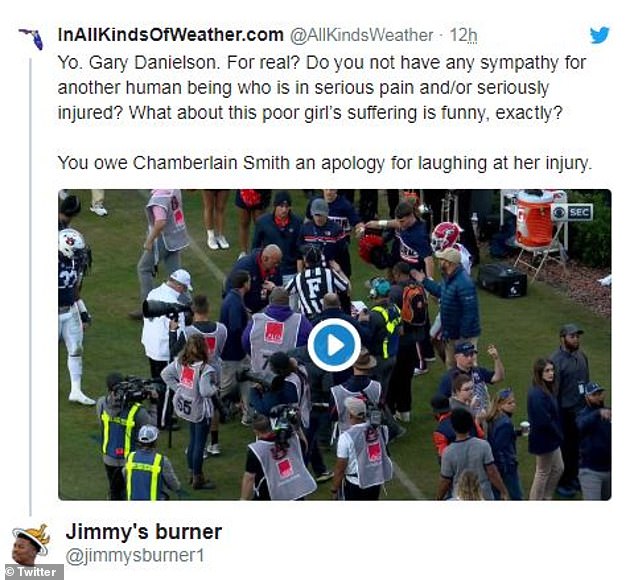 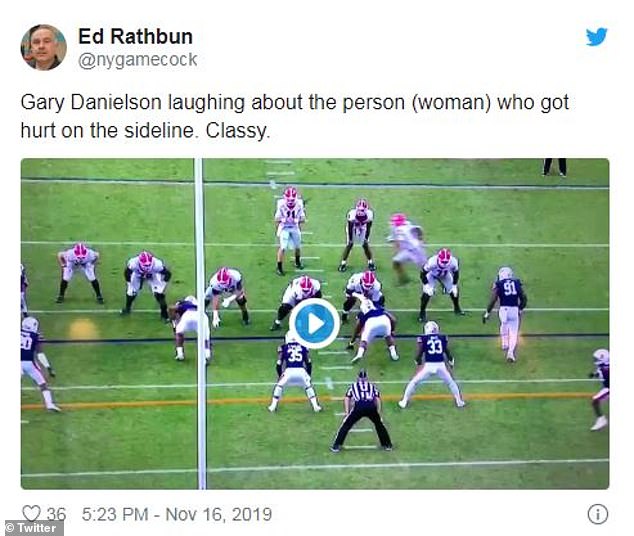 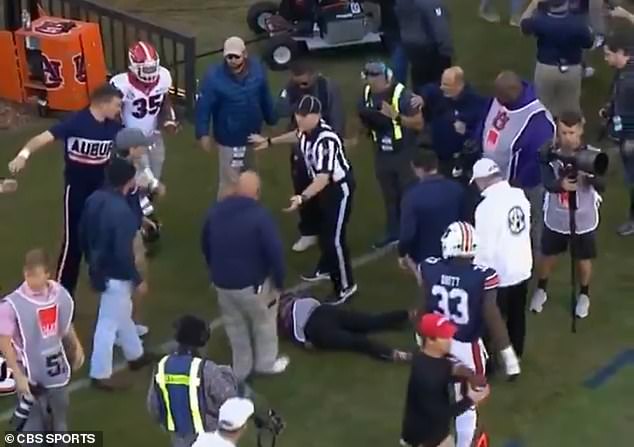 Brian Herrien (35) stands near Chamberlain Smith, who is seen flat on her stomach after he ran into her on the sidelines

The running back was ‘pretty upset’ by the injury and prayed for Smith with Georgia quarterback Jake Fromm, CBS sideline reporter Jamie Erdahl said.

‘It was really a scary moment,’  Georgia head coach Kirby Smart told The Advocate.com. ‘Brian felt very sick about it. It was a tough deal, but hopefully she’s going to be OK. I think she is.’

The university tweeted after the collision: ‘Please be praying hard for Chamberlain Smith. Photographer and UGA student who went down on sidelines.’

After being checked at a local hospital, Smith was treated and released.

Herrien wasn’t injured in the crash, and even ran for a touchdown on the first play after action resumed. 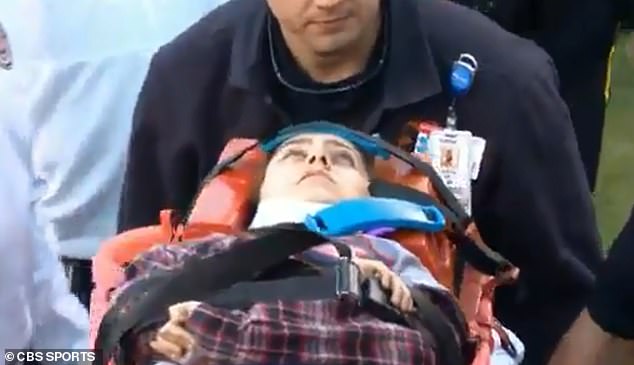 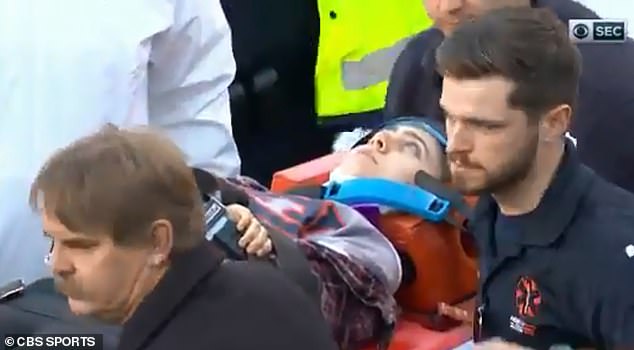 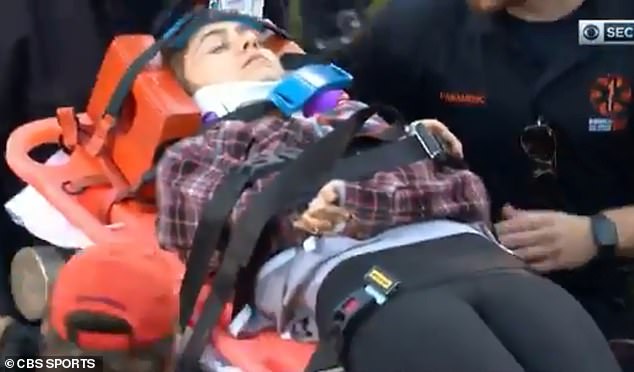 Smith was later released from hospital and appears to be uninjured