Gary Lineker and Micah Richards led the praise for Sweden striker Alexander Isak with the Match of the Day host predicting the forward will get interest from Europe’s top clubs this summer.

The 21-year-old forward played a pivotal role in the penalty that earned Sweden the 1-0 win, flicking a delightful ball through to Robin Quaison who was felled by Slovak goalkeeper Martin Dubravka, which allowed Emil Forsberg to slam home from 12 yards.

Isak, who scored 17 LaLiga goals for Real Sociedad last season, has been linked by reports with a move to Arsenal and Lineker hinted at the forward becoming the breakout star for the tournament. 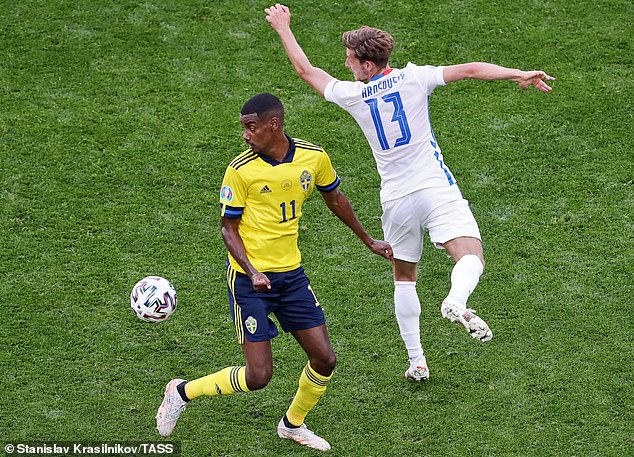 The Match of the Day host tweeted: ‘Don’t think there’s much doubt that Alexander Isak will attract a lot of attention from clubs across Europe. Exceptional talent.’

Richards believes Isak is a ‘gem’ of the player after his heroics against Sweden and highlighted the 21-year-old’s recent links by reports to Arsenal.

He told the BBC: ‘He’s got such quick feet for a big man. If there was anyone who was going to make the difference in this game, it was this man.

Don’t think there’s much doubt that Alexander Isak will attract a lot of attention from clubs across Europe. Exceptional talent.

Isak is yet to get off the mark at Euro 2020 this summer, but did impress during Sweden’s first group game – a 0-0 draw with Spain on Monday night.

The striker was a problem for both the Spain and Slovakian defences, with former Arsenal defender Alex Scott claiming he gave his team a much-needed spark after a dull first-half in St Petersburg. 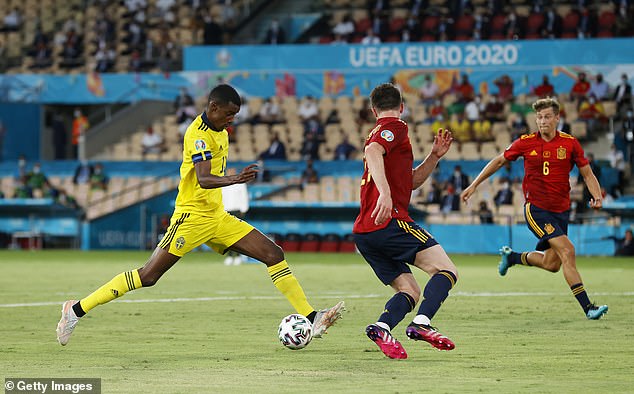 Scott said: ‘He was that one player giving them a bit of magic and that bit of a spark. We’ve seen him taking getting to the back post, leaping for headers.

‘You knew because of the whole game, something was happening because of him which led to the penalty.

‘He’s got ability to get your head down, take players on 1v1 in the box. He managed to tell his players to get up the field and come with me.’

Former Wales defender Ashley Williams added: ‘I think he set the tone in the second half for Sweden. At times he was doing everything on his own and taking three or four men. 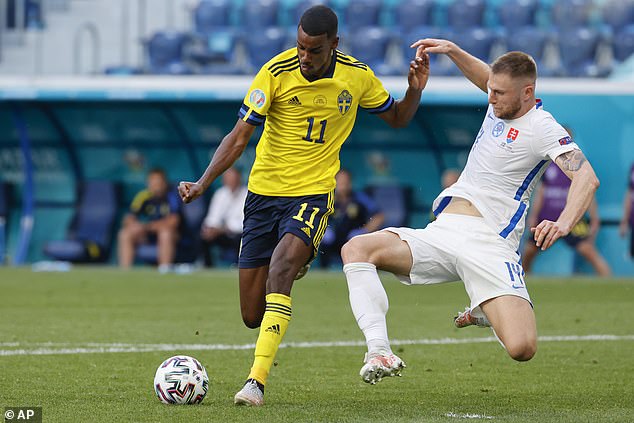 ‘He’s had a good season but now watching him and a couple of times (at Euro 2020), he’s exciting, unusual a different type of player.

‘They are the type of players that you can see and watch and get you going. I think he played very well in the first game as well.’

Mikel Arteta’s Arsenal have club captain Pierre-Emerick Aubameyang and Alexandre Lacazette as first-choice striker options, though the latter has just one year left on his Gunners contract.

Eddie Nketiah, Gabriel Martinelli and Folarin Balogun are the back-up strikers at the Emirates Stadium, though the Brazilian is able to play out wide.