Daughter of Britain’s first ‘gay dads’ Tony and Barrie Drewitt-Barlow, Saffron, 18, is pictured with her boyfriend Scott, with whom she wants twins by surrogate

Having had five children born to surrogate mothers, you would think that Barrie and Tony Drewitt-Barlow would be pretty broad-minded fathers.

But, no matter how they arrive in the family, you can always rely on children to surprise their parents.

And so when their daughter Saffron announced that she wanted twins via surrogate – aged just 18 – it caused a very modern family fall-out.

Not only that, she wants to donate any ‘spare’ embryos to her fathers, who are desperate for more children.

Barrie and Tony, self-made millionaires originally from Essex, made history as the first gay men in the UK to legally father children through surrogacy in 1999.

Despite this, Miss Drewitt-Barlow admitted her fathers, who built up a £40million fortune via medical testing businesses, were ‘deeply shocked’ when she revealed her own plans to start a family with her boyfriend.

She said she and her father Tony, 53, who is seriously ill with complications following cancer, didn’t speak for two days.

‘Dad [Tony] was shocked to the core and he said we should be married before we have a kid and I needed to consider what I was saying,’ she added.

However, not many parents would have accepted her radical plans without question.

Miss Drewitt-Barlow wants to undergo IVF with her boyfriend, Scott Hutchison, 23, in the hope that a surrogate mother can carry their baby or babies. Any further embryos she will donate to her fathers. 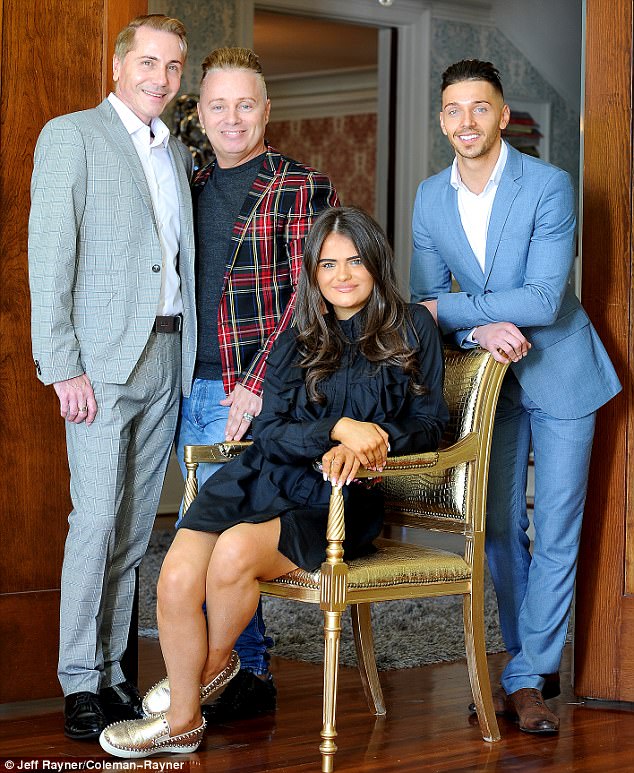 Barrie and Tony (pictured left with Saffron and Scott), self-made millionaires originally from Essex, made history as the first gay men in the UK to legally father children through surrogacy in 1999

If that happens, she would be both mother and sister to any babies. Yesterday Miss Drewitt-Barlow, who calls her fathers ‘Dad’ and ‘Daddy’, said: ‘I’ve always known that I wanted to be a young mum, I just can’t face nine months of carrying them.

‘Ideally, I would like twins: a boy and a girl. We have got all the technology with IVF and the surrogates through Daddy’s surrogacy company. I’ll be 19 by the time they are born – there’s plenty of mums that age.’

After their initial shock, she eventually talked round her fathers, who own a surrogacy firm.

She said that after two days, Tony ‘apologised when he saw how much this means to me’.

She added: ‘He said that whatever I decide to do he will support me 100 per cent. That means a lot.’

She said Barrie and Tony, who already have five surrogate children aged 18 to six, are desperate for more daughters.

Miss Drewitt-Barlow (pictured at home in Tampa, Florida) wants to undergo IVF with her boyfriend, Scott Hutchison, 23, in the hope that a surrogate mother can carry their baby or babies. Any further embryos she will donate to her fathers

‘Inevitably with IVF there will be a number of eggs that I don’t use,’ Miss Drewitt-Barlow added.

‘Rather than leave them on ice indefinitely, or donate them to strangers, I’ve decided I’m going to give them to my dads.

‘It will be a bit weird – although genetically they would be quads, daddy’s two children would be aunt or uncle to my two. I can imagine the haters will have a field day with this – but as long as I’m a good mum and we already know my dad and daddy are great dads, that’s all that matters.’

Her boyfriend Mr Hutchison, who used to be Barrie’s personal assistant, admitted the arrangement was odd.

He and Miss Drewitt-Barlow have been dating for two years and plan to marry.

He said: ‘I can’t deny this is a bit freakish. However, I can’t wait to be a dad. People are bound to judge us but I love Saffron, I see our future as a family and so I don’t mind if people don’t agree.’

The family has had a turbulent few years, while Tony was battling throat cancer.

His daughter said he will die within 18 months unless he has an operation to repair his jawbone, which has been damaged by radiotherapy treatment. 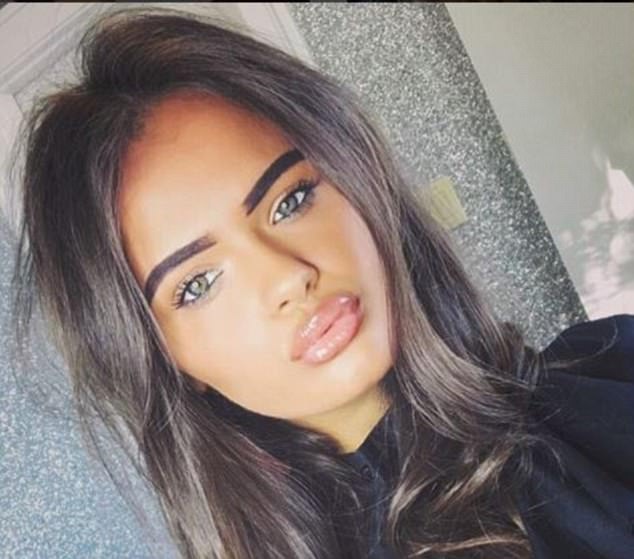 Saffron Drewitt-Barlow, 18, has hit headlines for being a ‘spoiled brat’ and a ‘daddys’ girl’

Even if he has the surgery to replace his jaw with bone from his leg, Miss Drewitt-Barlow said there is still a 50/50 chance of survival.

She added: ‘We’re all devastated. My daddy [Barrie] is completely beside himself.’

Miss Drewitt-Barlow and her twin brother, Aspen, were conceived using the donor eggs of one woman. Barrie is the father of one child and Tony the father of the other.

But they have never revealed which man is the biological father of either twin, as they consider themselves equal parents.

The couple went on to have three more sons via surrogacy – Orlando, 13, and twin boys, Jasper and Dallas, six. Barrie, 49, also has a biological son, Colin, from a fling with a woman when he was 19.

The family live together in a sprawling £5million ten-bedroom property in Tampa, Florida.