A gay Russian couple have been charged with a criminal offence after using an apparent legal loophole to have their marriage recognised.

Eugene Wojciechowski and Paul Stotzko tied the knot in Denmark on January 4 and returned to their home in Russia, where their documents were approved.

However, same-sex marriage is illegal in the country and the couple have now been charged with ‘intentional damage to passports or negligence’.

Eugene Wojciechowski (left) and Paul Stotzko (right) tied the knot in Denmark on January 4 and returned to their home in Russia, where their documents were approved

Their marital status was validated ‘without superfluous questions’ and their passports stamped without a hitch, the pair told independent Russian channel TV Rain.

But now the press office of the Moscow Department of the Interior has said the men will face charges regarding their documentation, The Independent reported. 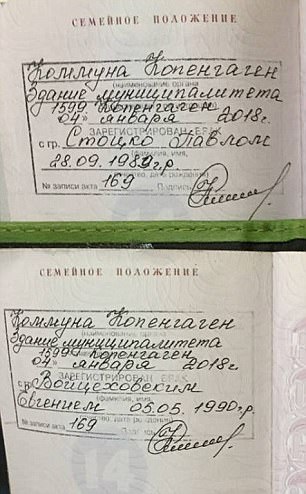 Interfax reported that ‘Article 19.16 of the Administrative Code on ‘deliberate damage to documents’ entails a warning or an administrative fine in the amount of 100 to 300 rubles’.

Russia does not register same-sex marriages, but marriages abroad are deemed legally legitimate if they do not contradict ‘Article 14 of the Family Code’.

The article prohibits marriage between close relatives and people already married, and ‘mutual voluntary consent of the man and woman entering in marriage’ is required.

However, it says nothing about same-sex unions being a disqualifying factor.

The press officer at the Moscow office where the marriage was approved has not confirmed a mistake was made and said further discussion was ‘inexpedient’.

Homophobia remains prevalent in Russia despite homosexuality being decriminalised in 1993.

A controversial ‘gay propaganda law’ was introduced in 2013 which banned ‘propaganda of non-traditional sexual relations’ among minors.

Stephen Fry famously confronted Vitaly Milonov, one of the architects of the law, during an explosive interview which received thousands of views on YouTube.