Geelong star Jeremy Cameron has led the partying following the club’s 81-point grand final thrashing of Sydney with his winner’s medal last seen hanging around the neck of one of his cows.

Such was the dominance of the Cats in their 81-point victory, commentators already remarked it was ‘party time’ during the third quarter – and it appears that carried on until at least 4.30am for some players.

Cameron, who lives on a farm just outside of Geelong, shared his wild celebrations with his more than 57,000 Instagram followers.

No doubt the boy from the tiny Victorian town of Dartmoor is putting in his nomination for ‘Best on Ground’ in the off-field celebrations.

After the side presented the Cup to fans outside the MCG and had an official club function, Cameron continued partying on his farm with some joyous mates.

In a barn that has been converted into a bar, Cameron posted a video of him and four friends, including former Cats ruckman Dawson Simpson, raising glasses of beer.

He filmed one of his friends pouring a beer out of a tap installed at the converted barn, saying: ‘Might be late tomorrow.’ The video was timestamped at 4.18am.

It got even wilder from there.

The next video on Cameron’s Instagram story hilariously showed him chasing after a small herd of calves and admitting ‘we’ve done something silly here’. 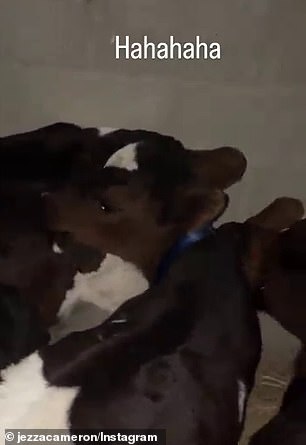 The star full forward pointed to one of the calves, which was wearing his grand final winner’s medal around its neck.

‘Can I have my medal back?’ Cameron asked the cow, before suggesting it could keep wearing it for the night.

‘Let him have it for the night, get out there, enjoy it, it’s for all of us.’ 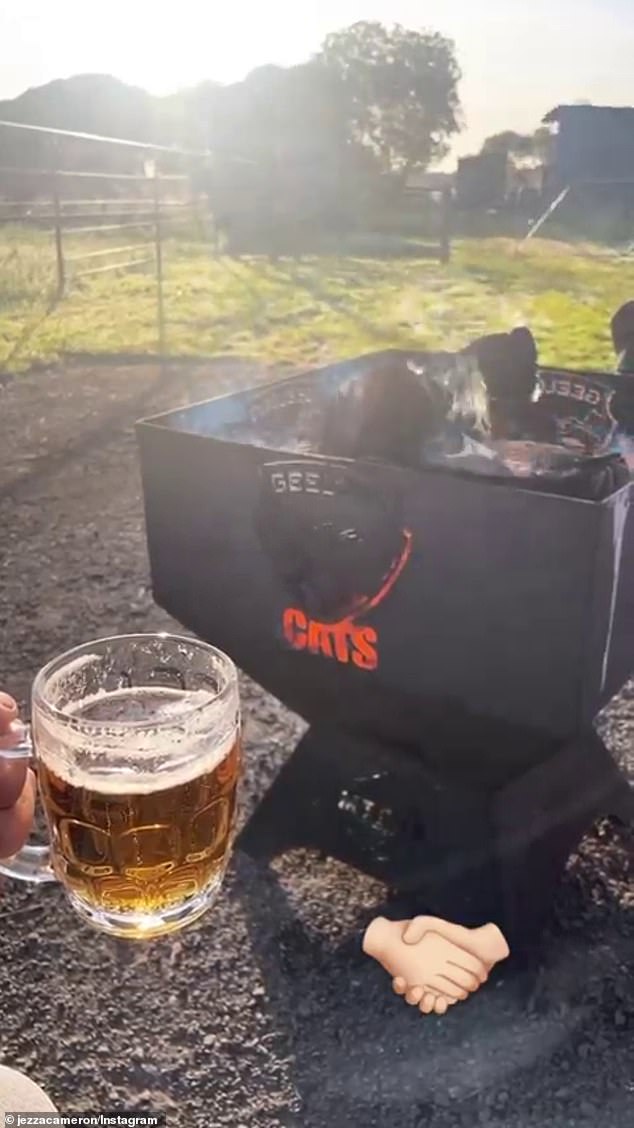 Despite a long night of partying, Jeremy Cameron posted a shot of him sitting next to a firepit just after 7am, appearing to hold a glass of beer

Cameron, who kicked two goals in the grand final, was up again at 7am, posting a shot of a glass of beer in front of a Geelong-emblazoned firepit.

Earlier in the night, Cameron posted a few selfies enjoying the club’s celebrations on the team bus and the official function.

He could also be seen drinking out of the Premiership cup, in a video posted to teammate Brad Close’s Instagram. 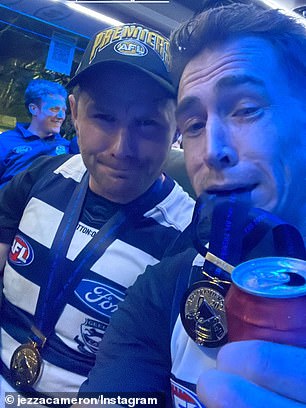 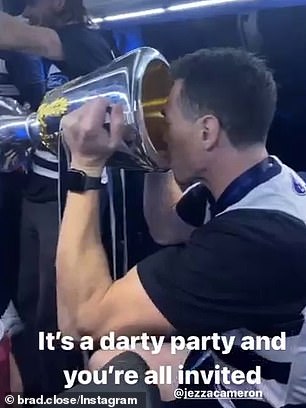 Irishman Zach Tuohy, who was playing in his 250th game and was chaired off the field, was also in the thick of celebrations.

He posted a video of AFL legend Eddie Betts, who is now an assistant coach at the Cats, wearing some stylish sunglasses, calling it ‘GOAT (greatest of all time) things.’

Tuohy was also seen celebrating with fellow Irishman Mark O’Connor after the game, with the latter posting a shot of the two of them together captioned: Far from home, mon the town.’ 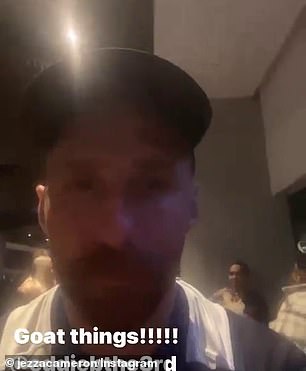 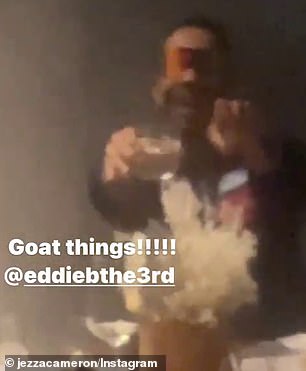 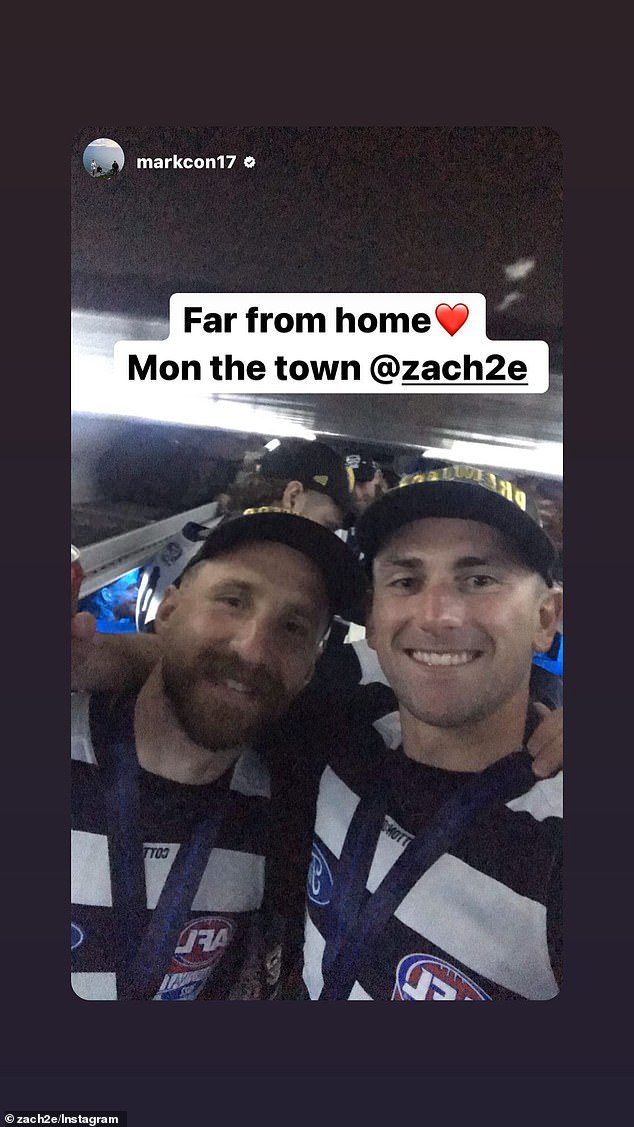 Despite the huge 81-point win, there was some heartbreak in the Geelong rooms.

20-year-old winger Max Holmes was a last-minute omission from the side after suffering a hamstring injury in the preliminary final.

He reportedly passed a fitness test, but could not be sure to last in the biggest match of the year – so Geelong opted to bring in O’Connor instead.

Holmes was all-class and showed leadership beyond his years as he dealt with the heartbreak stoically; before taking to social media to thank the footy world and Cats fans for all their support. 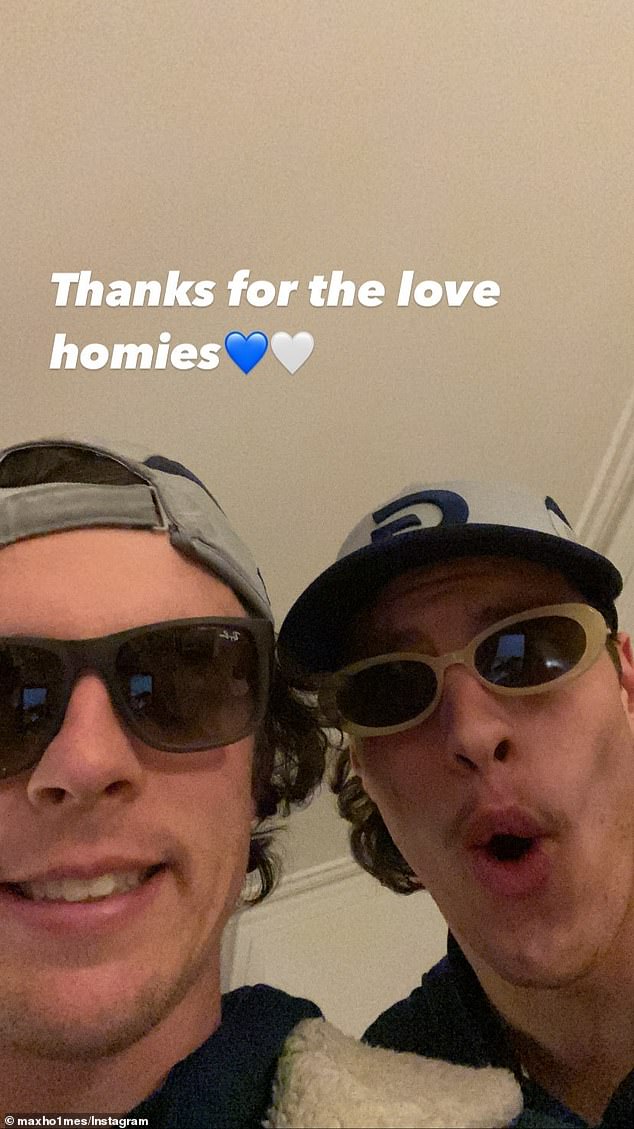 Geelong winger Max Holmes (left), who was a last-minute omission from the side due to injury, thanked Cats fans for their support

The Cats lingered on the hallowed MCG turf for a long time after the final siren, quite understandably wanting the moment to last as long as possible.

They then moved away from the ‘G to Yarra Park, where a legion of fans were waiting for their beloved heroes.

Taking to the stage, the players posed with the trophy in a group photo before Joel Selwood and Norm Smith medallist Isaac Smith took to the microphone to speak to their supporters. 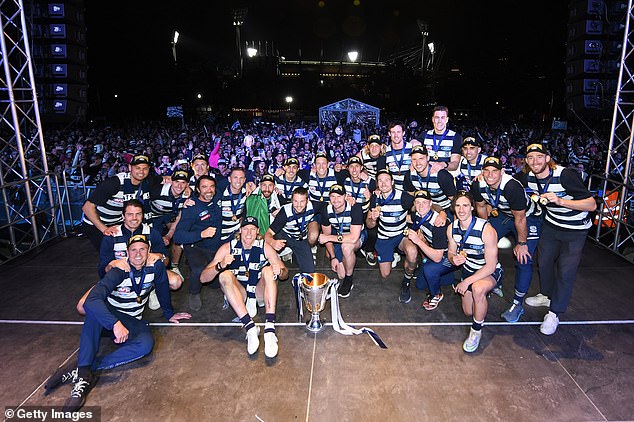 Cameron lauded the impact of the rabid Cats fans after the game, saying they were the reason he plays footy.

‘I’ve mentioned it all year but to have crowds back, but it’s one of the reasons I love playing football,’ he said.

‘I hated not having crowds. It sucked. To see everyone back in the G – Swans supporters as well … that’s massive and the family’s even better.’

The team is set to present the Cup to their fans this morning down in Geelong, where the sore heads will momentarily subside as the entire ‘Steel City’ chants out their names.