Skygazers have a chance tonight to enjoy what NASA calls the ‘best meteor shower of the year’ and ‘the cosmos’ annual gift to sky watchers’.

The Geminid Meteor Shower, which peaks during mid-December each year, is considered to be one of the most prolific and reliable annual meteor showers.

When the Earth passes through the trails of dust left by asteroid 3200 Phaethon, that dust burns up in Earth’s atmosphere, creating a shower of ‘shooting stars’.

Tonight, up to 150 shooting stars are expected to be visible per hour, although the bright moon might make it harder to spot them.

The Geminid Meteor Shower, which peaks during mid-December each year, is considered to be one of the best and most reliable annual meteor showers. Pictured, a single bright meteor from the Geminid meteor shower of December 2017 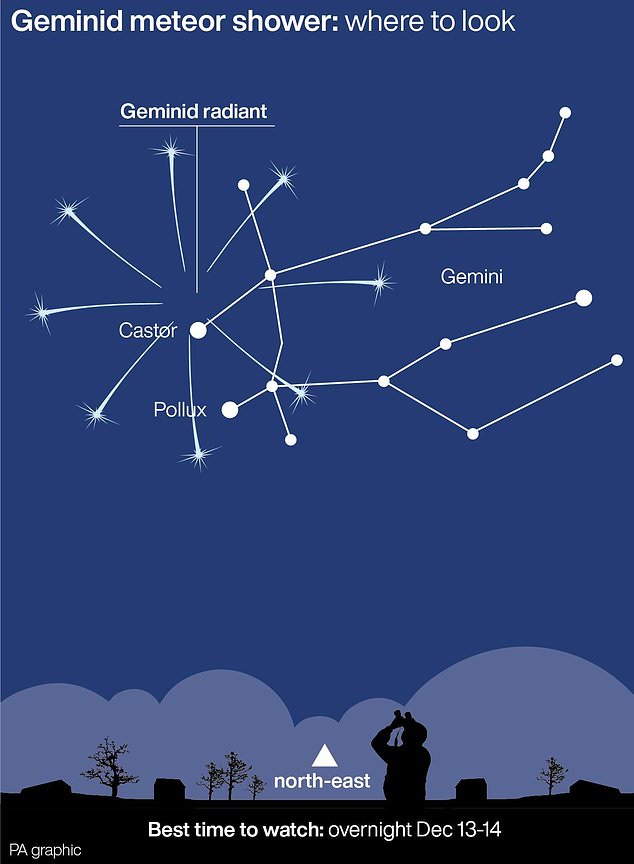 Up to 150 meteors are expected to be visible per hour, although the bright moon might make it harder to spot them. Geminids are named after the point at which they appear to originate, in the constellation Gemini

How to see the Geminid Meteor Shower

For prime viewing, find an area away from city and streetlights, bundle up for winter weather conditions, bring a blanket or sleeping bag for extra comfort, lie flat on your back with your feet facing south, and look up.

Practice patience because it will take approximately 30 minutes for your eyes to fully adjust and see the meteors.

Refrain from looking at your cell phone or other bright objects to keep your eyes adjusted.

The show will last for most of the night, so you have multiple opportunities to spot the brilliant streaks of light across our sky.

Anna Gammon-Ross, astronomer at Royal Observatory in Greenwich, said the Geminid Meteor Shower is set to peak on Wednesday night and will be visible until early Thursday morning.

‘The peak here in the UK will be during the night of December 14-15, when up to 150 meteors will be visible per hour,’ she said.

The meteors will be visible in the east of the sky from around 6pm, but will appear all around the sky later in the night.

Ms Gammon-Ross added: ‘Unfortunately, the waning gibbous moon will make it trickier to see the meteors during the peak night this year.

‘The gibbous phases are when the near side of the moon is over halfway lit up by the sun, meaning it will appear very bright in our skies.

‘This will make it difficult to see any other celestial objects nearby.’

Ms Gammon-Ross said the best way to minimise its impact is to look for meteors before the moon rises – at around 10pm in the UK on the peak night.

She added: ‘For the best chances to spot the Geminids, find a dark area of clear sky and allow around 20 minutes to let your eyes adapt to the dark.

‘It may also be advisable to lie down as you may be looking up for a long time.’

Members of the public should also find a spot away from streetlamps and other sources of light pollution. 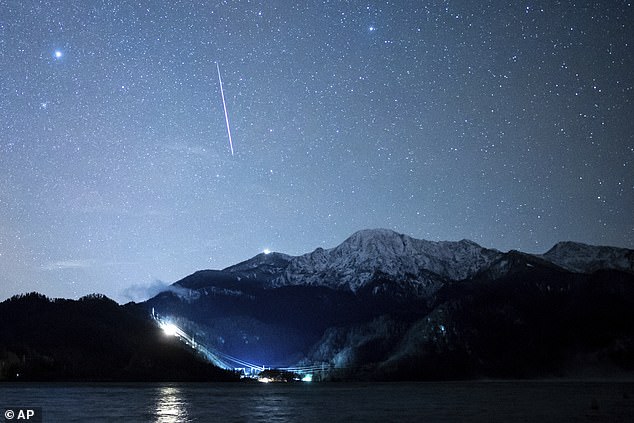 A shooting star seen during the Geminid meteor stream in the sky above the Kochelsee and the summit of the Herzogstand, Bavaria, Germany, December 14, 2020 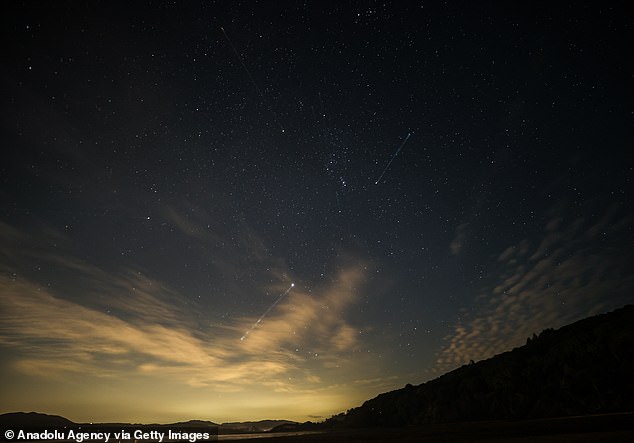 Geminids are unusual as they can be multi-coloured – mainly white, some yellow and a few green, red and blue

What constitutes a shooting star?

A shooting star is a piece of rock or metal that burns very brightly when it enters the Earth’s atmosphere from space.

From Earth it looks like a bright star travelling very fast across the sky.

For this reason, it’s referred to a ‘shooting star’ even though it’s not a star.

A star is a luminous ball of gas, mostly hydrogen and helium, held together by its own gravity, like our Sun.

The Geminid meteor shower was first reported in 1862, but it was not until 1983 that scientists determined 3200 Phaethon, was the source.

Phaethon, which is considered to be either an asteroid or an extinct comet, is only about three miles across, travels around the sun every 1.4 years and sheds its dust every time it nears Earth’s parent star.

The meteors, small pieces of interplanetary debris, appear to radiate from near the bright star Castor in the constellation Gemini, from which the shower’s name is taken.

Friction with the upper atmosphere heats up the incoming debris, causing the air around them to glow brightly.

This leads to streaks of light that are also known as shooting stars.

According to Royal Observatory in Greenwich, the Geminids are unusual as they can be multi-coloured – mainly white, some yellow and a few green, red and blue.

These colours are partly caused by the presence of traces of metals like sodium and calcium, the same effect that is used to make fireworks colourful, experts at the Royal Observatory said.

Those that shine the brightest will leave a glowing trail along their path. 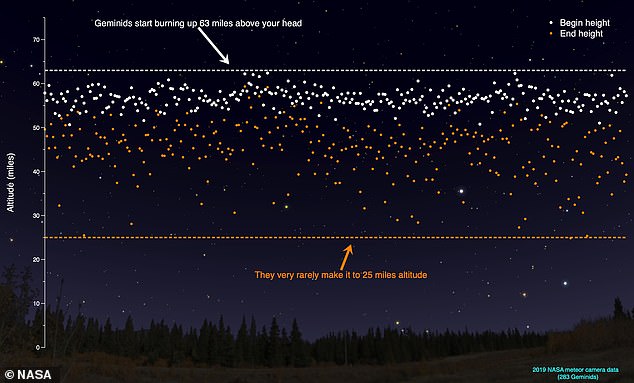 Infographic based on 2019’s meteor camera data for the Geminids. Geminids are widely recognised as the best annual meteor shower a stargazer can see 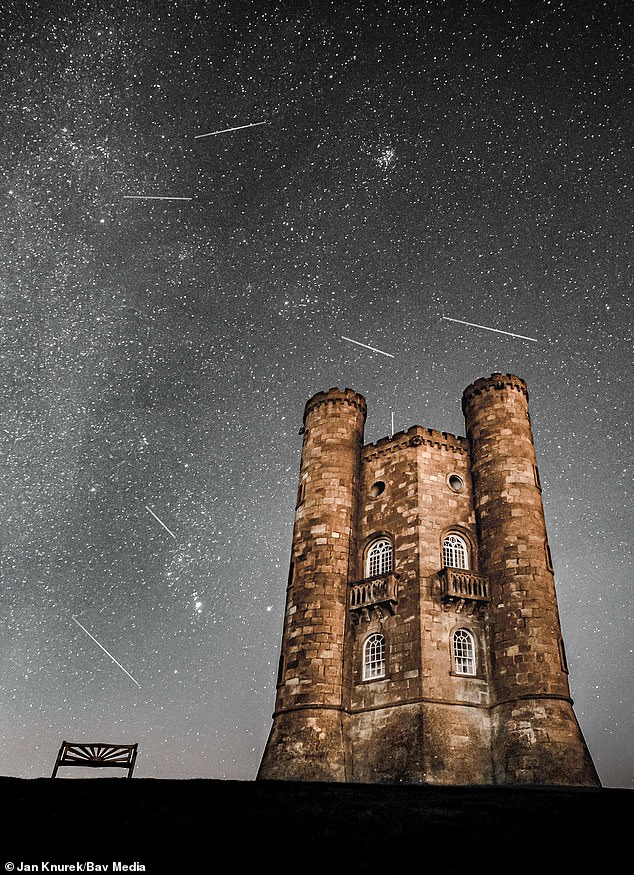 The Geminids also have a slower closing speed than many other comets as they enter Earth’s atmosphere at an angle, travelling at about 79,200 miles per hour.

The Geminid shower takes place every year between December 4 and December 17, although the exact time of the peak changes.

This year the showers will continue to be visible until December 20.