Gems Of The Seine cruise is magnifique

My heart sinks when offered ‘unsurpassed service’. And nothing makes me more wary, and weary, than a glossy brochure pledging that ‘expectations will be exceeded every day’.

Both these promises caught my eye in the advertisement for Scenic’s river cruise on the Seine. My wife and I went ahead and booked anyway.

On arrival, we were greeted by a traditional French accordion player, a hot hand-towel, a neon-blue cocktail concoction and a handshake — all before getting to reception.

Lap it up: The Scenic Gem pictured en route along the Seine, passing Les Andelys in Normandy

No tedious paperwork, just a handover of electronic keys and we were escorted to our cabin to meet our cases. Impressed so far.

We were on the Scenic Gem, one of a fleet of Scenic Spaceships -so-called because of their space to people ratio.

This is top-notch river cruising: comfortable cabins (or Balcony Suites as Scenic calls them), high-tech bathroom with luxury lotions and potions; a safe big enough for a laptop; a fridge stocked with free drinks and food; and an ingenious private verandah with an opening glass partition that separated our room from the balcony area.

It meant you could increase the size of your suite while still enjoying the balcony experience.

There were only 127 passengers. We had our own butler, but my wife and I managed quite nicely to dress ourselves, tie our shoelaces and unpack our undies without the help of Bogdan.

Our shipmates? Fifty per cent were Australian, 25 per cent American and the rest from Canada, New Zealand and the UK. The majority were 60-plus and about half had retired. With informal open seating for all the lavish meals, you can sit anywhere and with whomever you want.

The moment Americans knew we were from Britain, they seemed to want to show off their mastery of British geography, especially the couple who told us they liked the London suburb of Wales.

One woman said she was planning a cruise on the Queen Mary right into Leeds city centre. 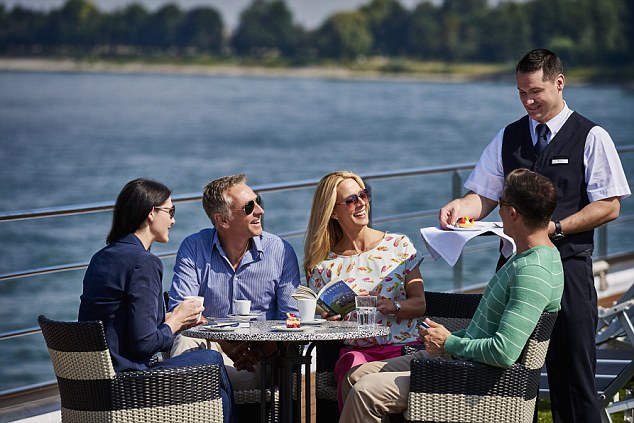 First-class service: The ship’s staff ‘seem to have had the word “No” extracted from their vocabulary’

The Australians also had their favourite dinner topic. We encountered a couple who casually chatted to us about the killer snakes and spiders in their backyard. ‘Oh, you get used to it.’ Really?

This 11-day, ‘no waves or seasickness’, gentle voyage up and down the Seine starting and finishing in Paris included stops at Giverny, to explore Monet’s spectacularly beautiful gardens that inspired so many famous paintings; the World War I battlefields, where most guests took advantage of the emotional visit to the Somme; the D-Day beaches to see where the historic landings took place; Rouen, for a walking tour of this medieval city to take in the famous sites of Joan of Arc; and Honfleur, to savour the narrow houses jostling for position by the quays.

Add in the sightseeing visits in Paris at both ends of the trip, several local Calvados tastings along the way and the low-key entertainment and lectures onboard, and it is easy to understand why river cruising is becoming so popular.

But what about the brochure claim about expectations being exceeded? Well, the ship’s staff seemed to have had the word ‘No’ surgically extracted from their vocabulary. This was a joy.

As we reluctantly descended the gangplank at the end of the cruise, I told the captain how well we had been looked after.

‘I tell all my team to treat people as though they were guests in their own home,’ he replied.

My wife looked at me and said: ‘Well, I hope you don’t expect that type of service when you get home.’

Travel Facts: Plan your own voyage along the Seine

Scenic (scenic.co.uk, 0808 102 1074) offers an 11-day, all-inclusive Gems Of The Seine cruise starting from £2,745 per person, including flights or Premier Eurostar to Paris, transfers and excursions.

Departures on selected dates between April and October 2016. Book before February 29, 2016, and save up to 27 per cent, plus door-to-door transfers.