A California wildfire which has so far destroyed 7,050 acres of land 40 miles northeast of Palm Springs was started by gender reveal party, it has emerged – leaving the family that hosted the party at risk of prison time and multi-million dollar fines.

Amid a record-breaking heatwave, with record temperatures of 121 degrees turning the state into a tinder box, the California Department of Forestry and Fire Protection said on Sunday night that a smoke-generating pyrotechnic device caused the fire.

The devices are sometimes used to release blue or pink smoke to announce the gender of an expected baby.

The fire started on Saturday at 10:23am, they said, and 527 people from 10 fire crews are currently trying to halt the fire’s progress.

It spread from the El Dorado Ranch Park north, onto the Yucaipa Ridge. The ridge separates Mountain Home Village and Forest Falls from the City of Yucaipa.

Bennet Milloy, spokesman for the department, told DailyMail.com that the people hosting the party were still on the scene when the firefighters arrived.

‘We know how it started because they were still there,’ he said. ‘That, and the fact that there were surveillance cameras in the park.’

Milloy said that it was a relatively small family gathering, and that the relatives had gathered for a photo opportunity.

The El Dorado wildfire (pictured), which broke out on Saturday morning, was started by a gender reveal party, it has been confirmed 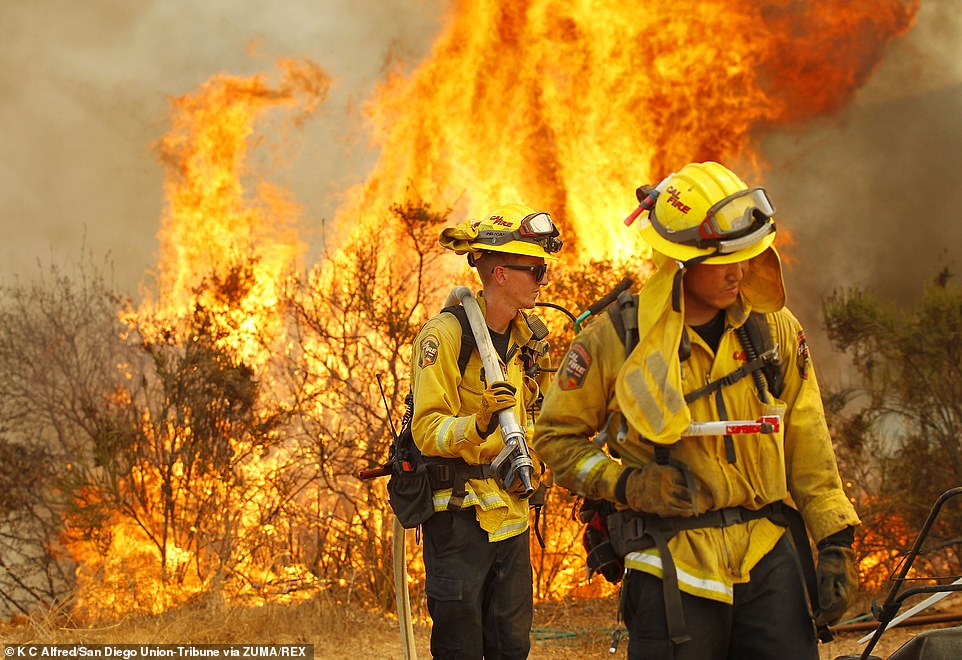 Cal Fire firefighters protect a structure near Montiel Truck Trail during the Valley Fire, in San Diego County on Sunday 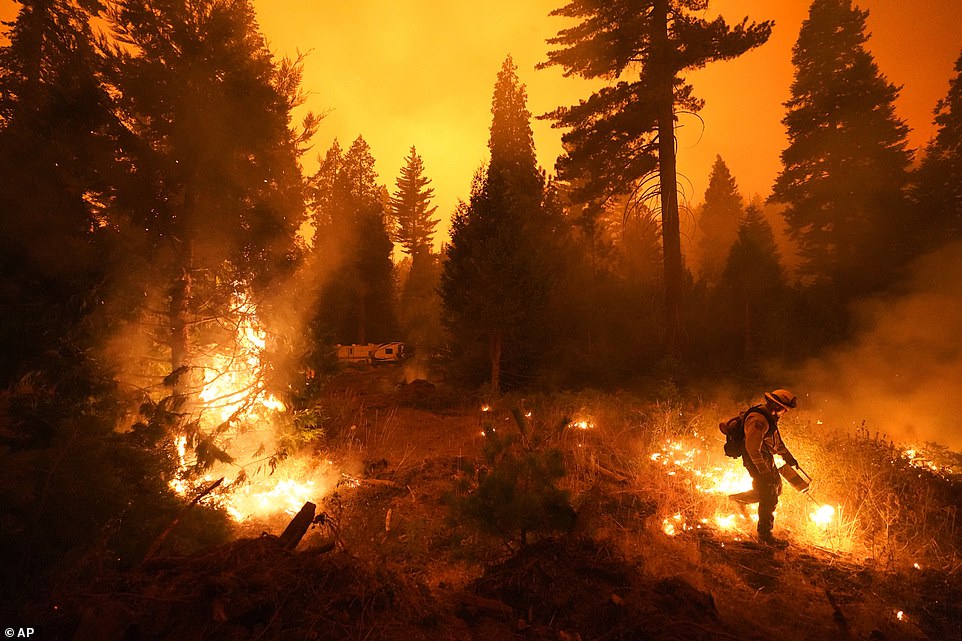 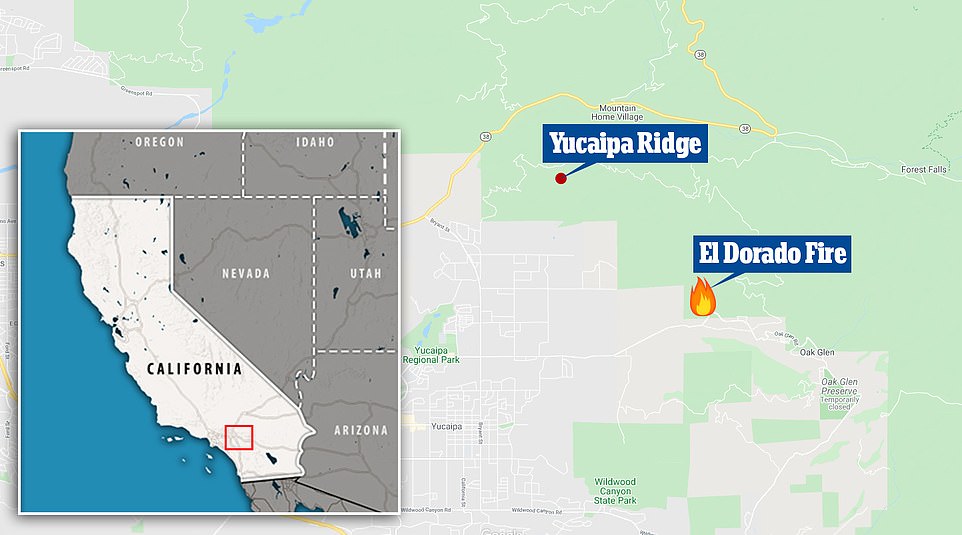 The fire spread from the El Dorado Ranch Park north, onto the Yucaipa Ridge and into the San Bernardino National Forest

The civil costs were deemed ‘suppression costs’ – the charges associated with hundreds of fire fighters, engines, helicopters and planes.

The criminal charges could fall under ‘a variety of charges’, he said – which would be more severe if homes were destroyed. The family could be hit with violations of public resources codes and even arson, under California’s penal code section 452. Arson convictions can result in a sentence of up to nine years.

Milloy continued: ‘They genuinely believed it was an accident.

‘But I think now they understand the gravity of the situation.’

He did not have their names, but said they would be released if charges were pressed. 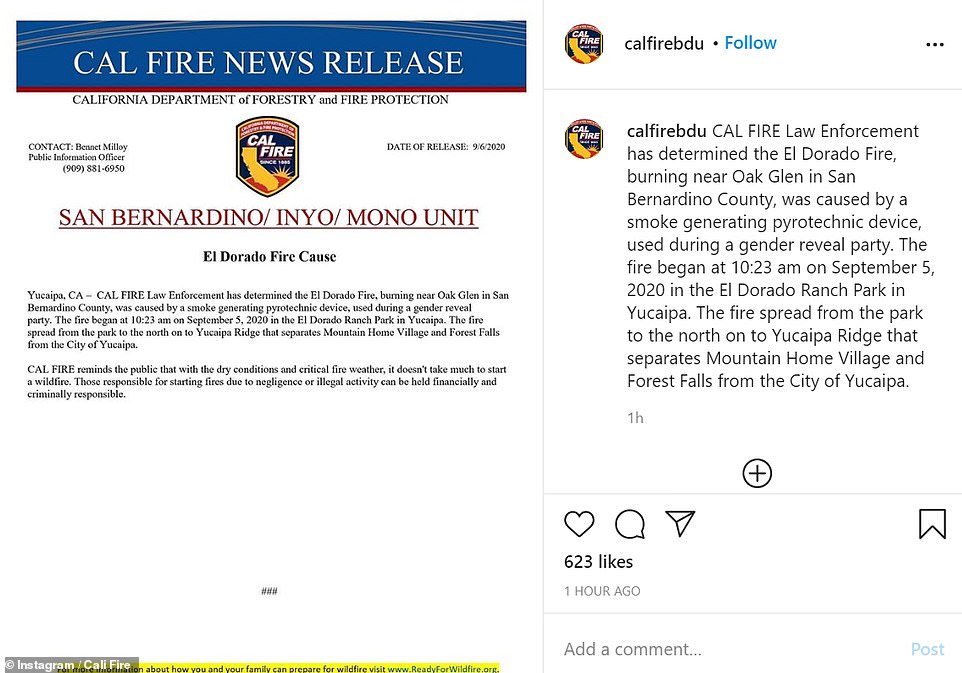 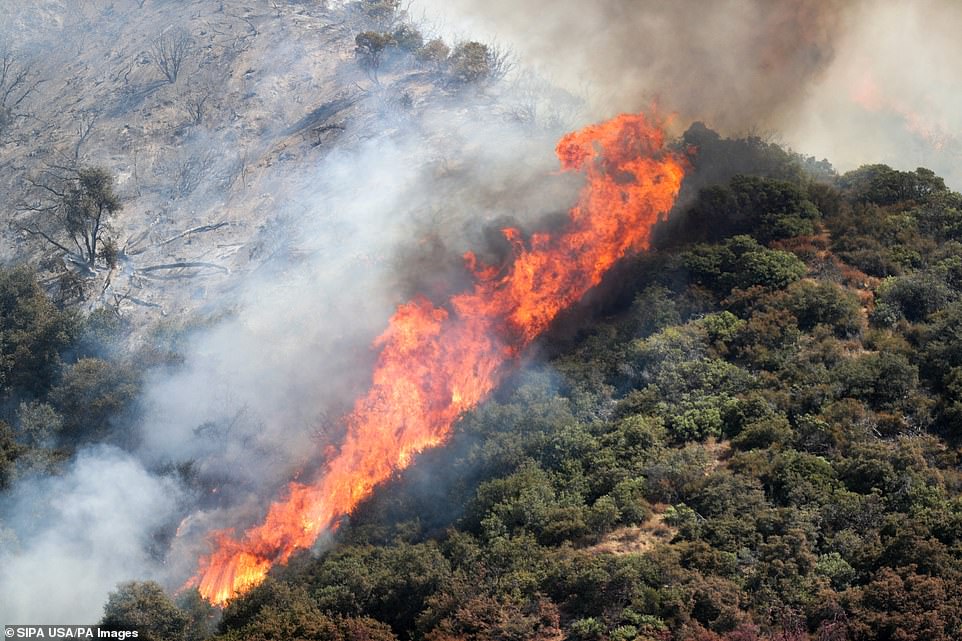 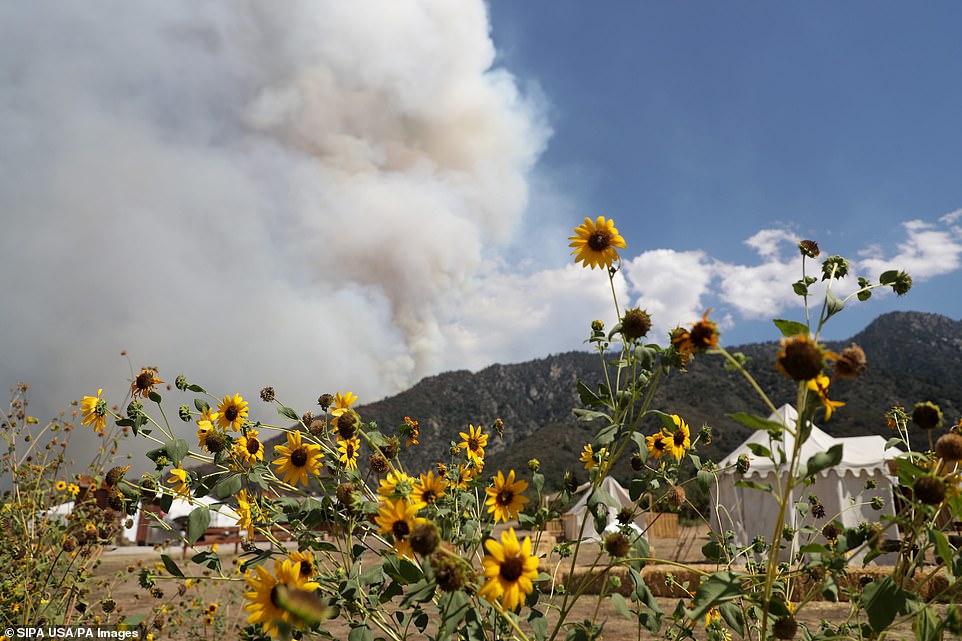 The fire spread rapidly north from where it started at the El Dorado Ranch Park north, onto the Yucaipa Ridge 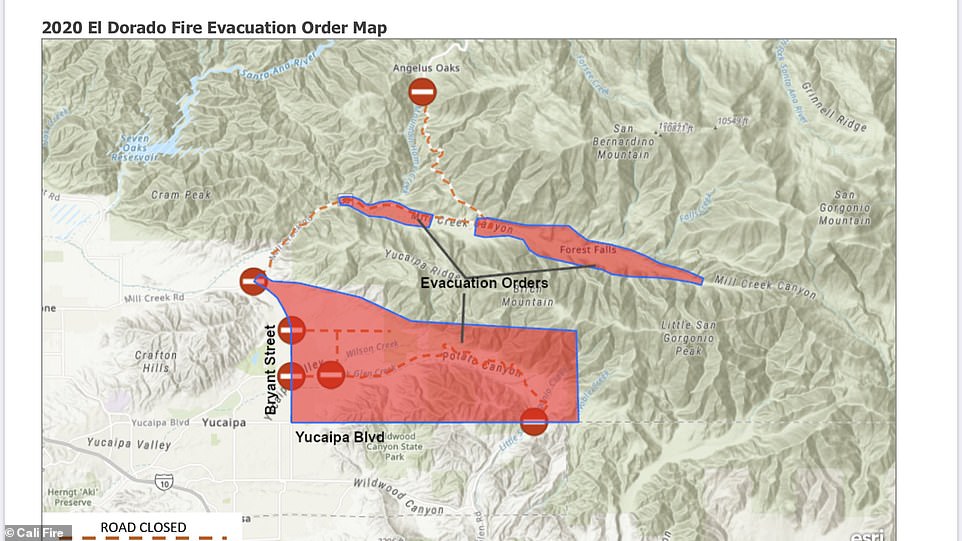 Evacuation orders are in place for the communities of Oak Glen, Yucaipa Ridge, Mountain Home Village and Forest Falls

No injuries have been reported. An outbuilding was destroyed on Saturday, Desert Sun reported, but no other damage was reported as of Sunday afternoon.

The paper said about 30 homes were threatened by the fire.

Evacuation orders are in place for the communities of Oak Glen, Yucaipa Ridge, Mountain Home Village and Forest Falls.

An Evacuation Warning is now in effect for the Yucaipa bench area, the fire service said.

Residents are being told that they may evacuate to Yucaipa Community Center as a temporary evacuation facility.

Fire fighters are using 60 fire engines and four helicopters to douse the blaze with water.

‘CAL FIRE reminds the public that with the dry conditions and critical fire weather, it doesn’t take much to start a wildfire,’ the press release stated. 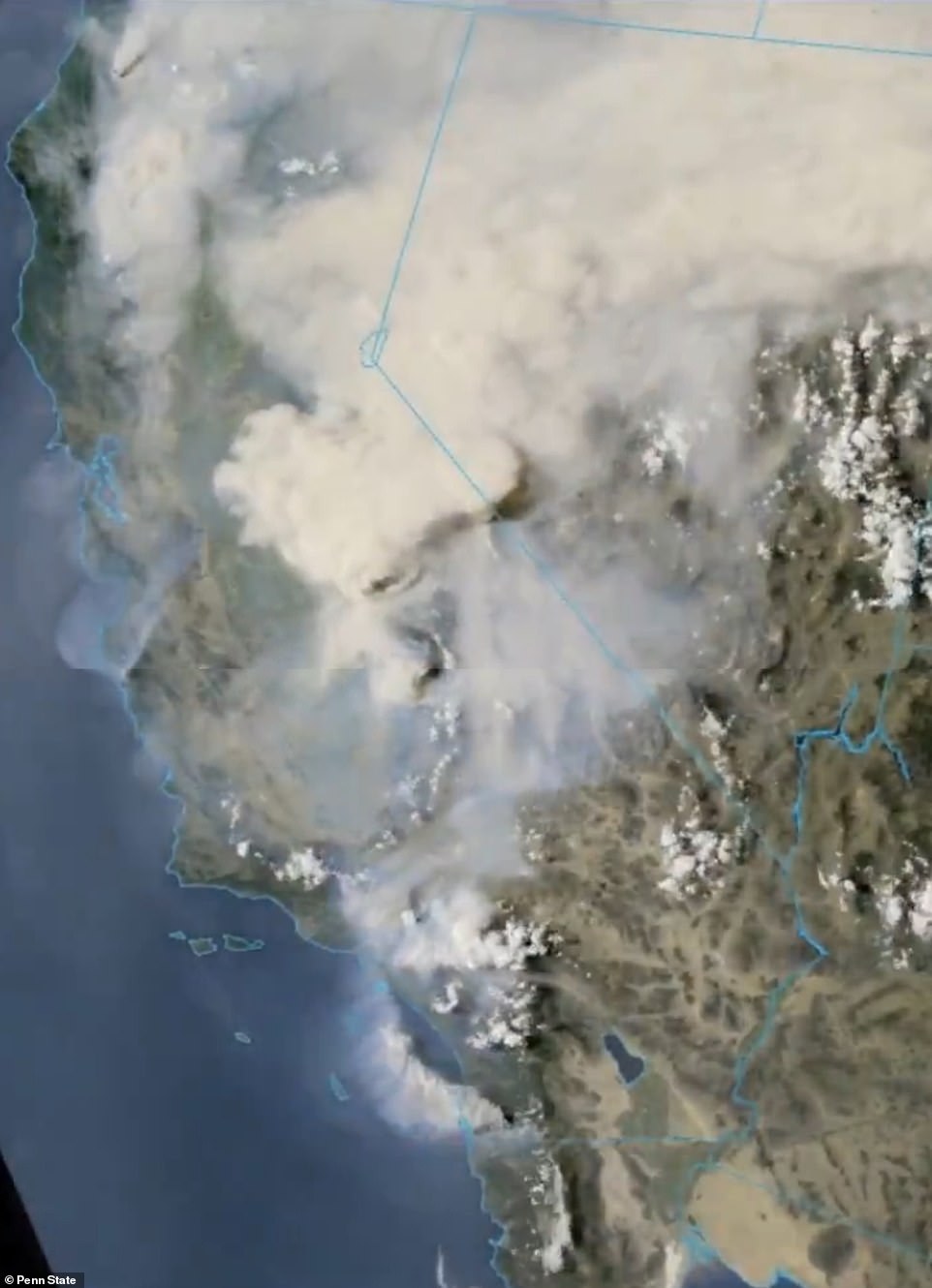 Satellite images on Saturday gave a sense of the scale of the El Dorado fire, which was started by a gender reveal party 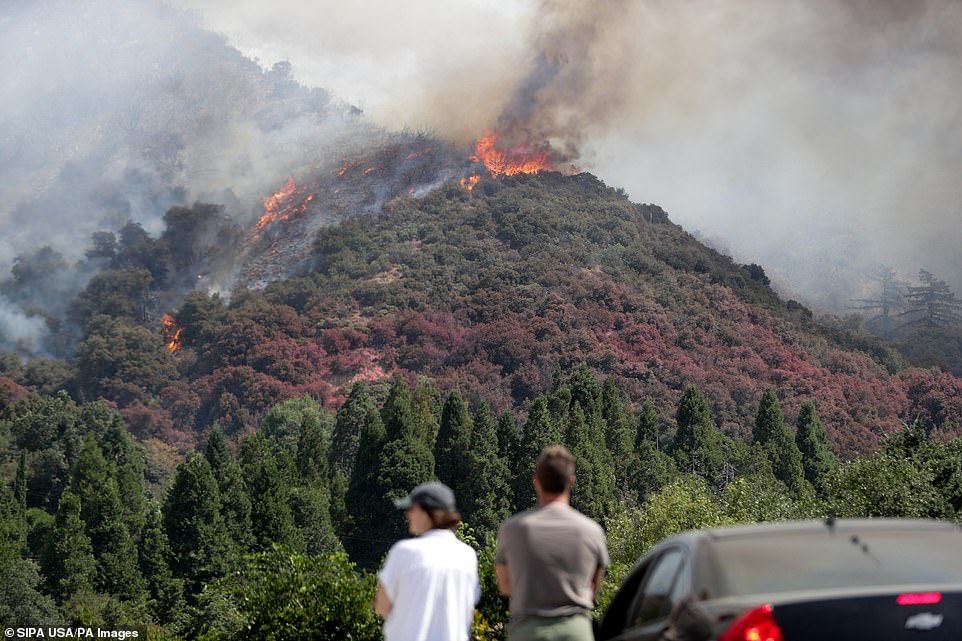 The El Dorado Fire blazed up into the San Bernardino National Forest, near Oak Glen, wiping out more than 7,000 acres 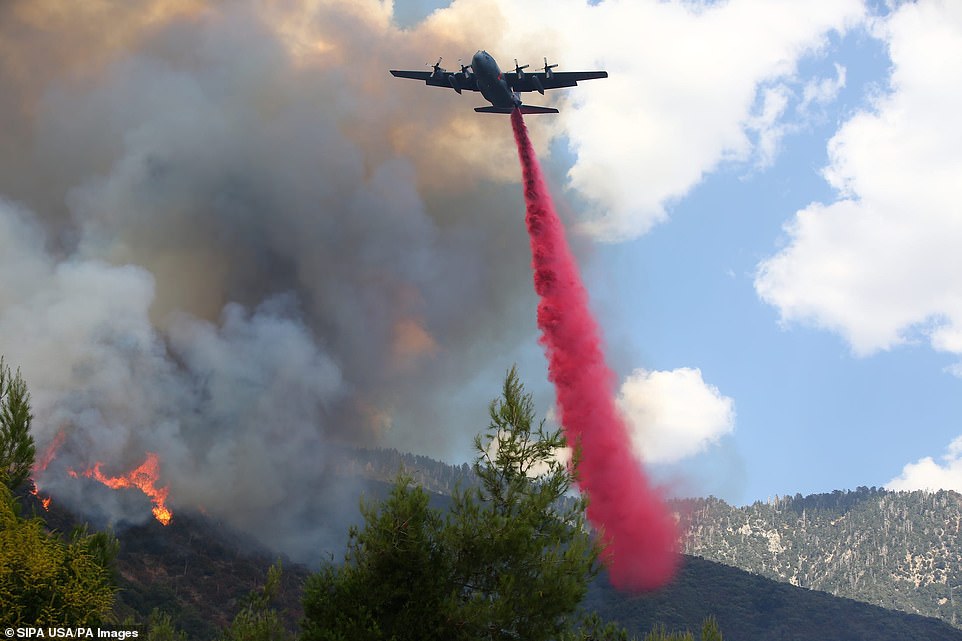 Helicopters, planes, and more than 60 fire trucks were being used by 527 fire fighters to try and contain the blaze 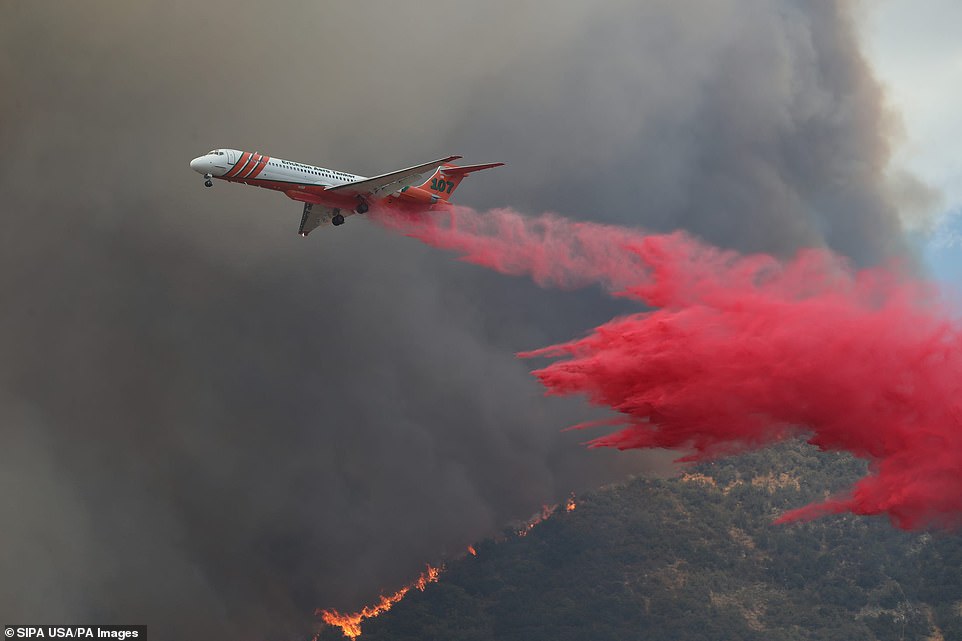 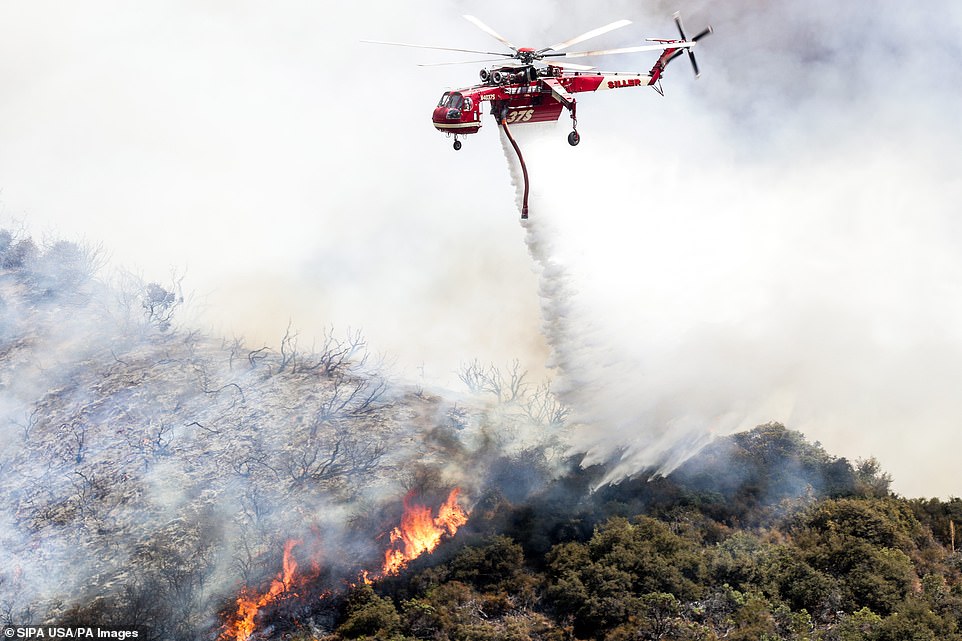 Helicopters were also used, pouring gallons of water onto the fire in an effort to contain the flames 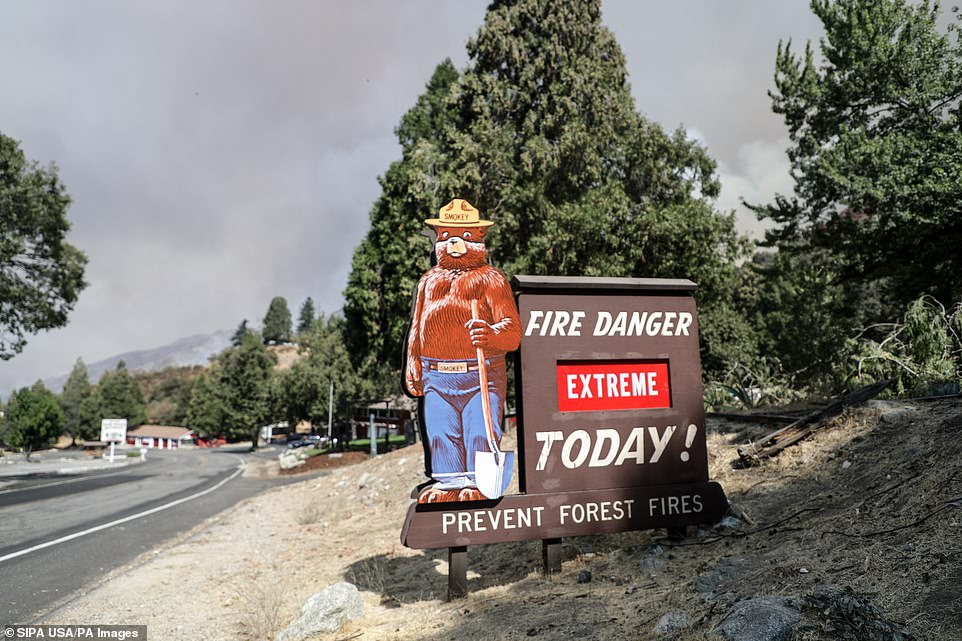 Gavin Newsom, the governor of California, on Sunday declared a state of emergency in five counties, including San Bernardino County due to the El Dorado Fire which continues to be ‘extremely active’ due to dry vegetation, steep terrain and sweltering hot weather across the region.

Officials are asking that residents heed evacuation warnings and travelers stay clear of the fire area.

‘We need to keep the firefighters we do have focused on firefighting and not on managing people,’ fire officials said in a joint press release issued on Sunday.

Fire officials said that it could be helpful, because the El Dorado Fire could enter the ‘burn scar’ and peter out.

The Apple Fire, which had been 95 per cent contained for weeks, was ignited on July 31 by a diesel-fueled vehicle ’emitting burning carbon from the exhaust system,’ investigators said.

Area temperatures are expected to surpass 110 degrees near Yucaipa as Southern California is engulfed in a heatwave.

On Saturday, temperatures peaked at 122 degrees in Palm Springs and similar conditions were expected on Sunday, according to the National Weather Service. 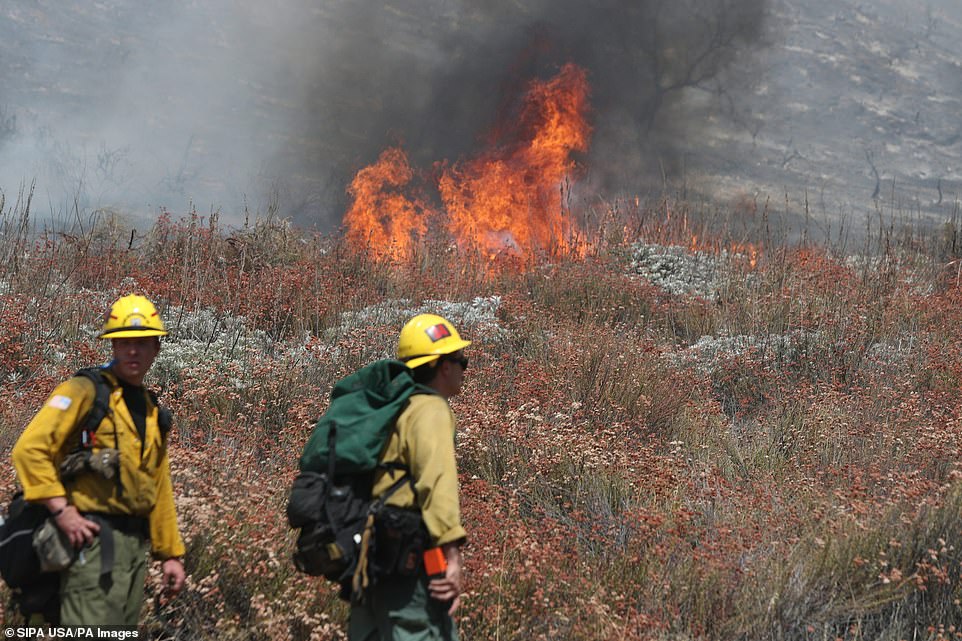 The fire service said that 527 people were working to stop the fire, which has benefited from tinder-dry conditions 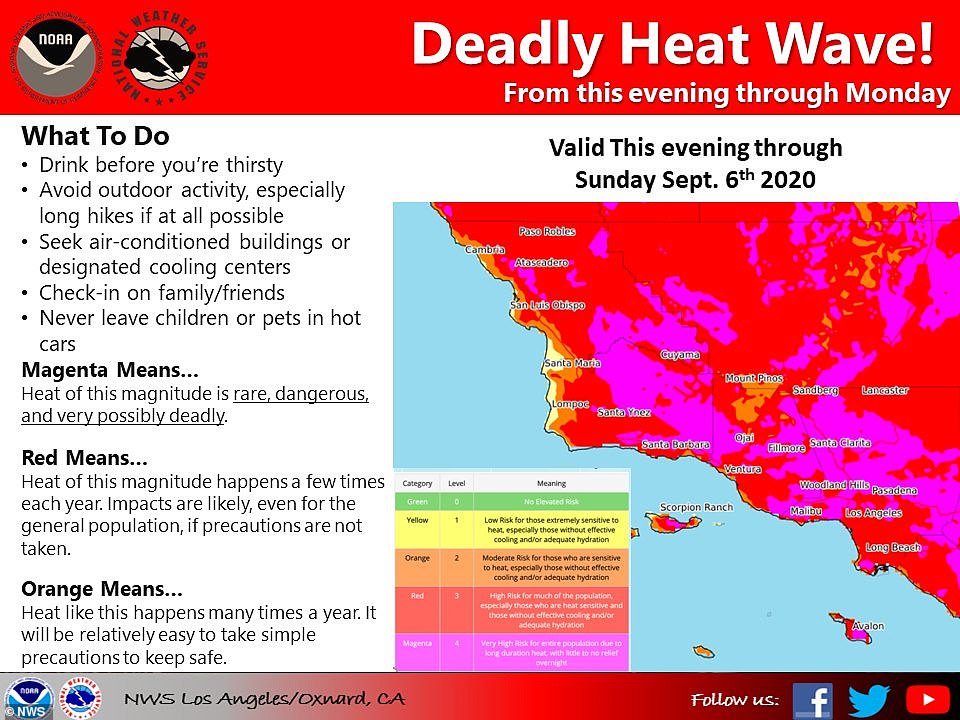 Across the whole of California, firefighters are currently battling 23 wildfires, which have so far destroyed 1.6 million acres.

Almost 15,000 firefighters were working to douse the flames, and battling against record temperatures in the state.

Fire fighters fear the situation will only get worse.

‘The National Weather Service has issued multiple Fire Weather Watches and Red Flag Warnings for this weekend and into next week due to potential critical fire weather including strong gusty wind and low humidity,’ the fire service said in a statement.

They said that a Red Flag Warning is in effect across much of the Inland Empire down through San Diego through Sunday.

A Red Flag Warning also went into effect on Sunday evening across the mountains of Santa Barbara to Los Angeles County.

A Red Flag Warning has been issued for Modoc County starting Monday.

A Fire Weather Watch across much of Northern California including the Bay Area, and the Eastern Sierra to the Mojave Desert will start on Monday. 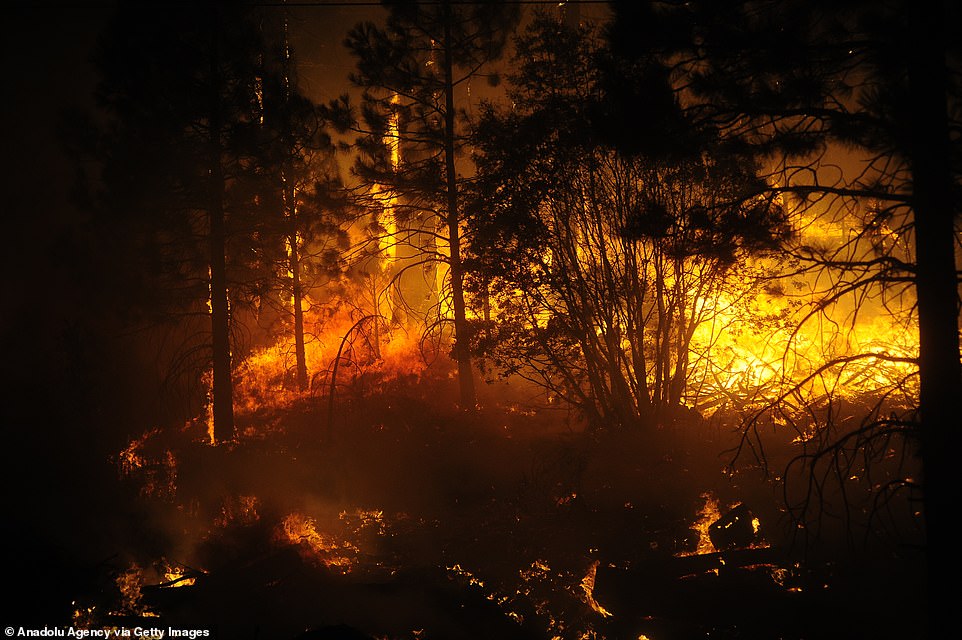 A view of the site of the Creek Fire which started Friday afternoon, blew up and grew to 73,278 acres by Sunday 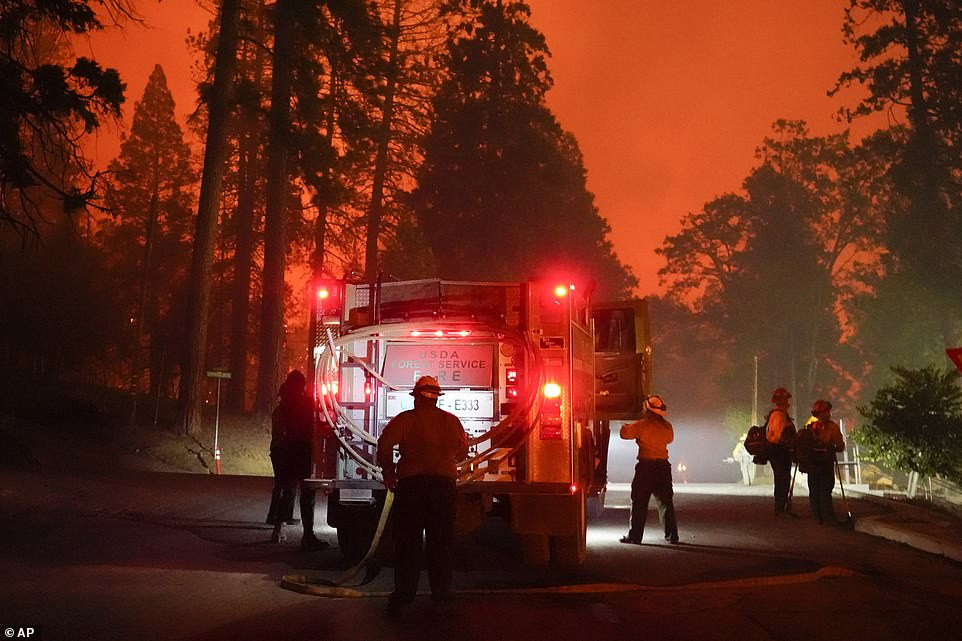 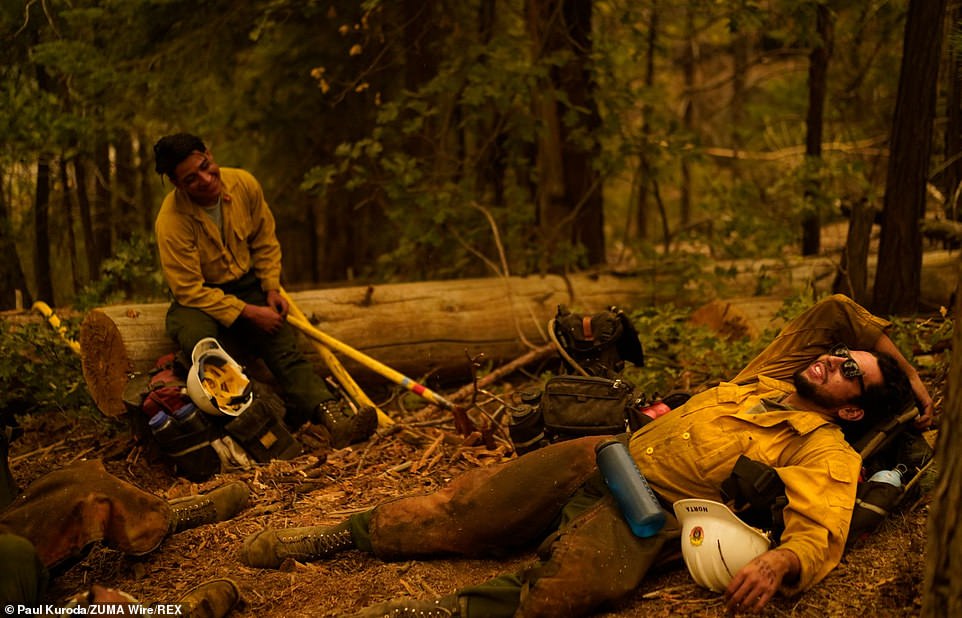 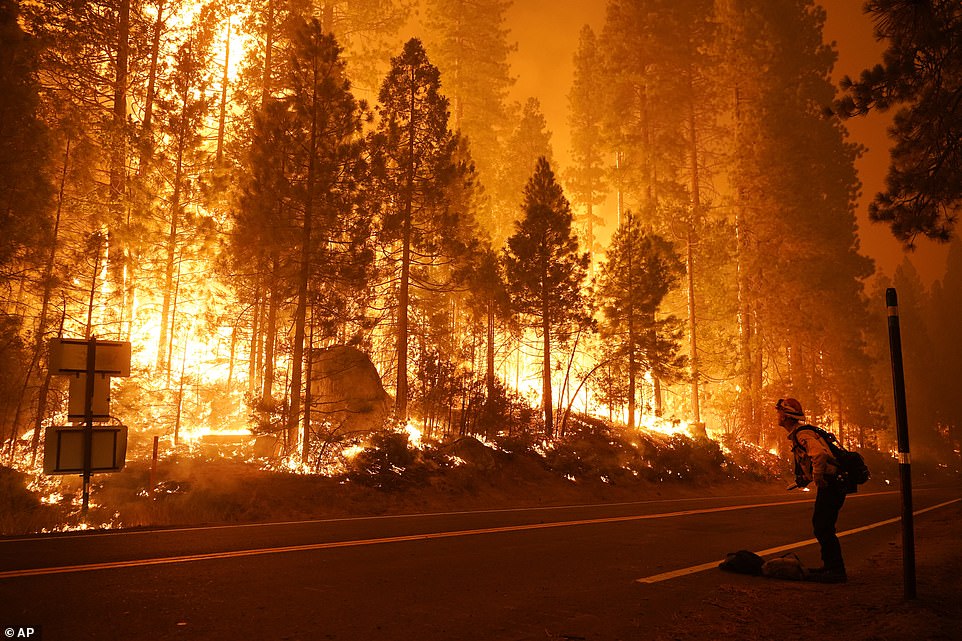 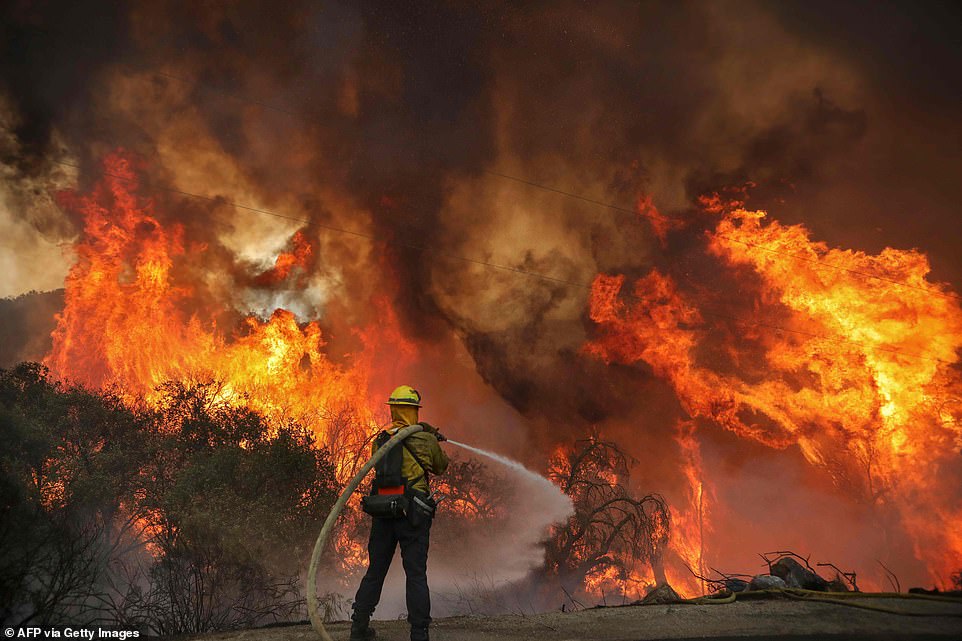 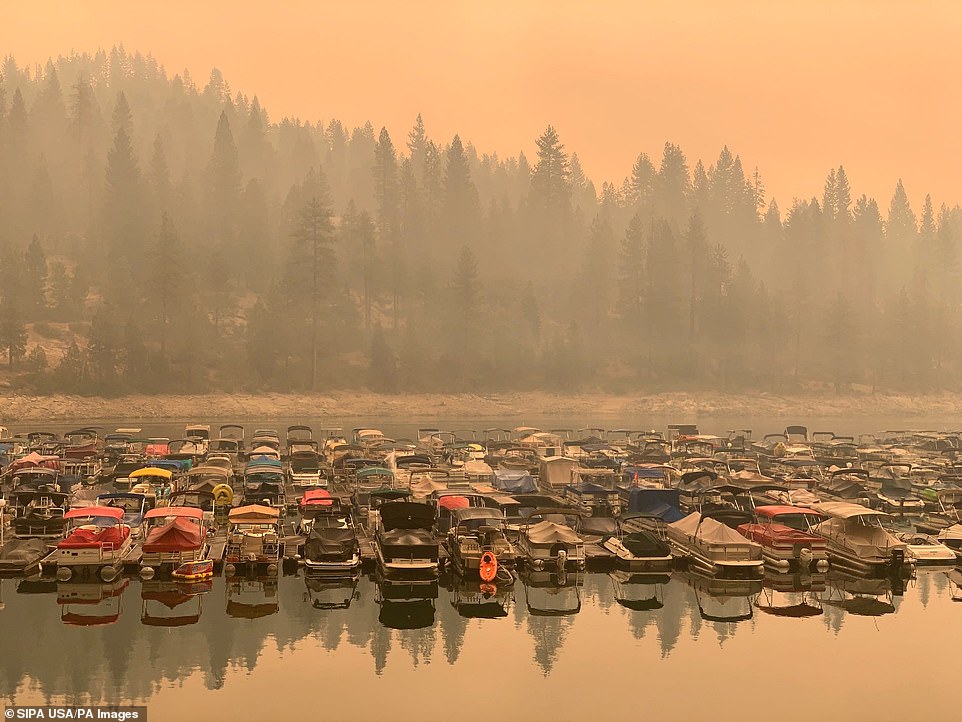 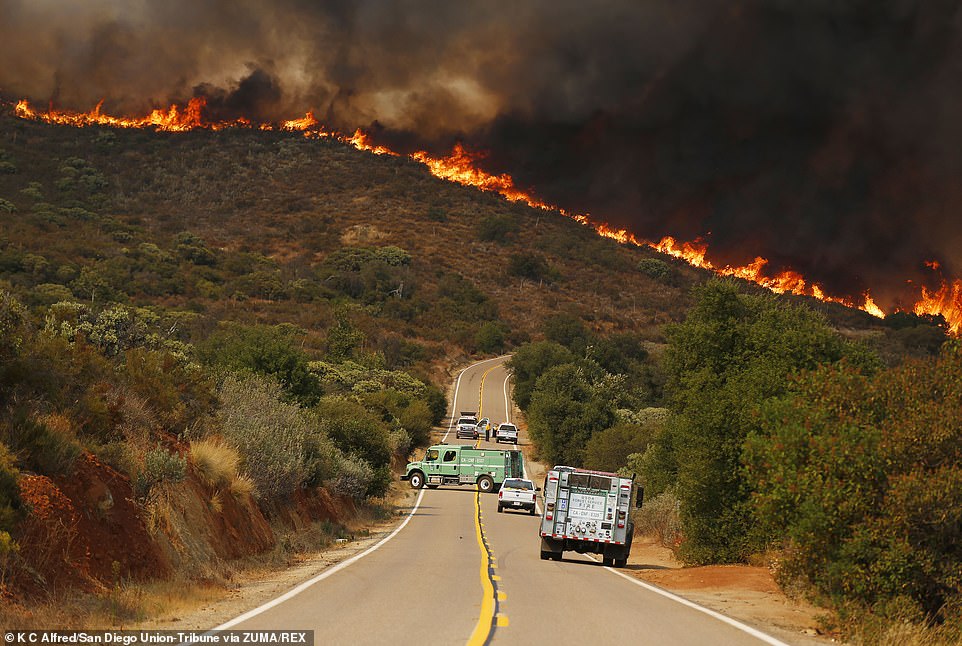 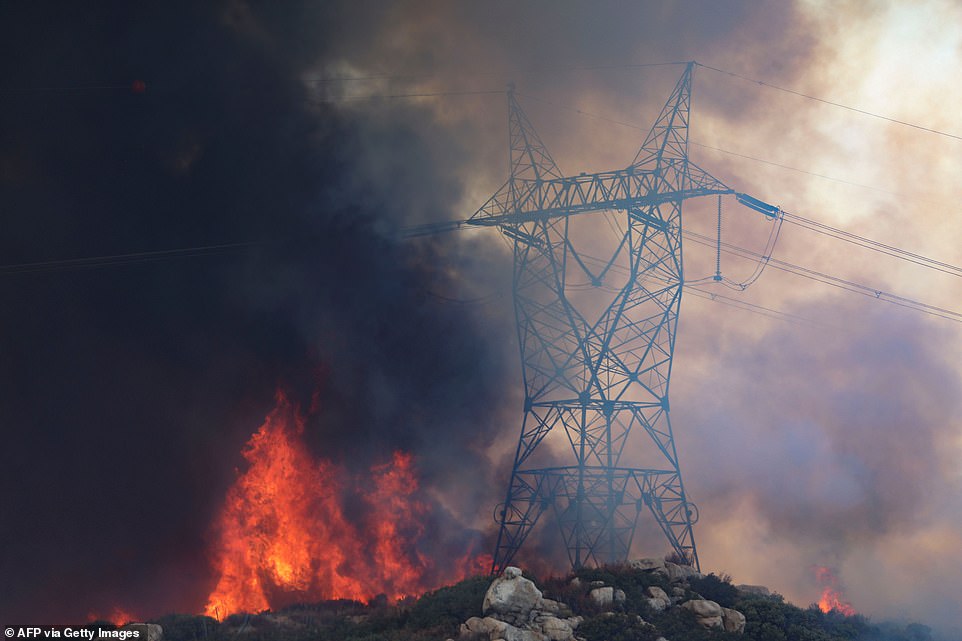 Power lines lie in the path of an approaching brush fire along Japatul Road during the Valley Fire in Jamul, California

Records for temperatures were broken across the state, with Paso Robles having the hottest day in the city’s history, as the mercury hit 112 degrees on Saturday.

The Woodland Hills neighborhood of Los Angeles also had its hottest day ever, with temperatures reaching 117 degrees.

The wildfire warning for the Santa Barbara area was upgraded to a red flag.

On Saturday night the National Weather Service warned southern Californians that the conditions were likely to continue.

‘Expect a similar hot day tomorrow, with inland temperatures peaking between 110-120 degrees, hottest likely in the valleys,’ they tweeted.

‘There will be some cooling on Monday, but still well above normal for inland areas. Best cooling across the coast. Stay hydrated and cool!’

Beaches across the state were packed with people on Saturday, soaking up the sun on the last official weekend of summer.

In Los Angeles, Santa Monica beach was crowded with families and friends seeking an escape from the heat. 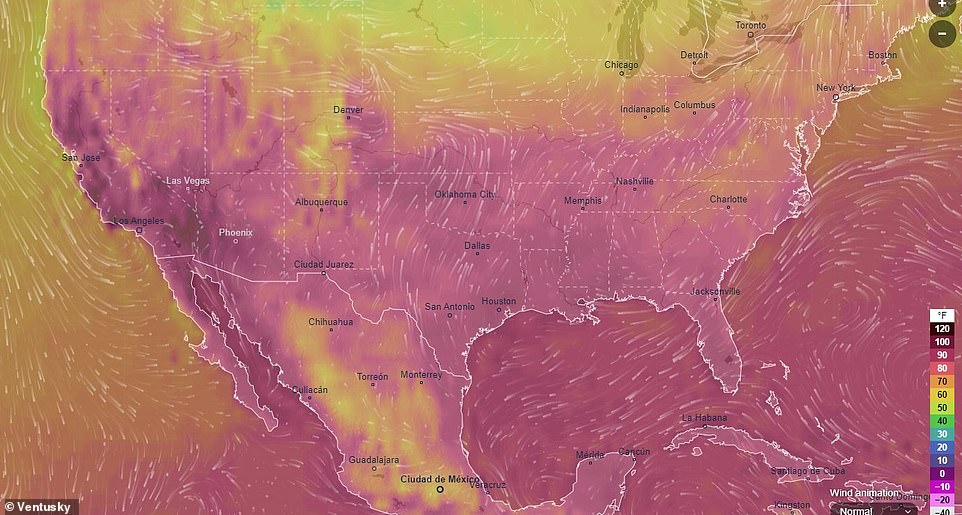 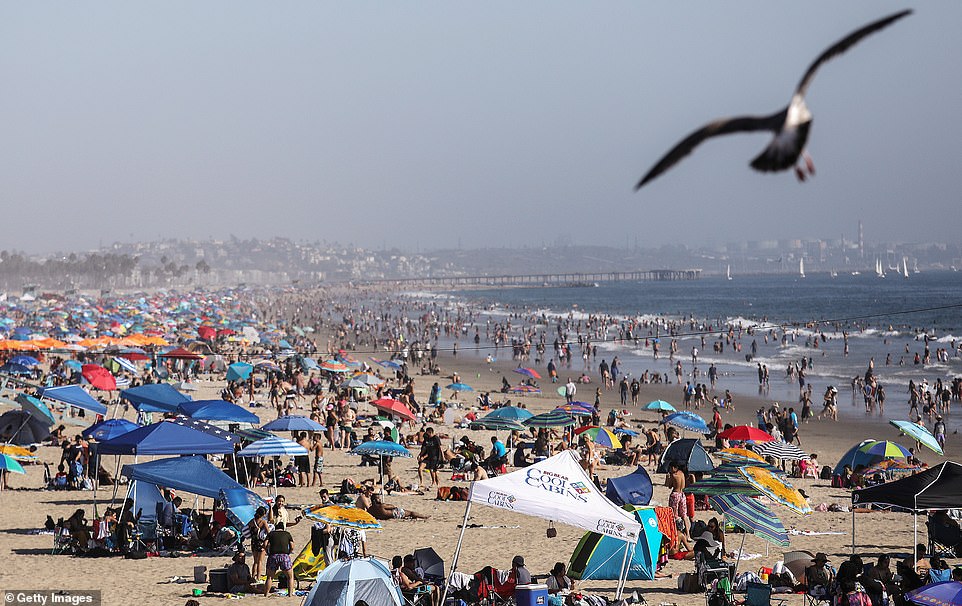 All along Santa Monica beach, people packed onto the sand with their friends and families 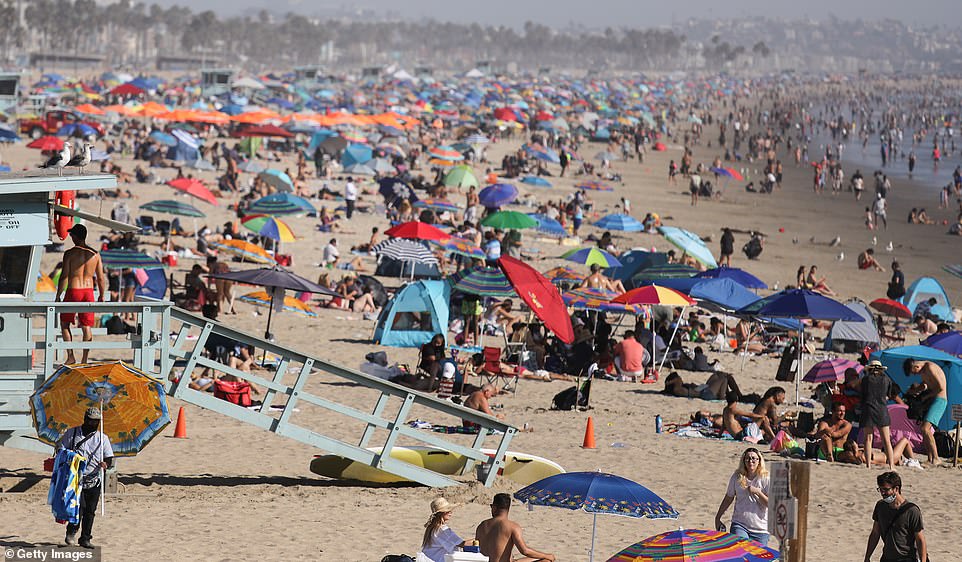 Santa Monica beach was busy with sun-worshipers, surfers and swimmers on Saturday amid the Labor Day holiday 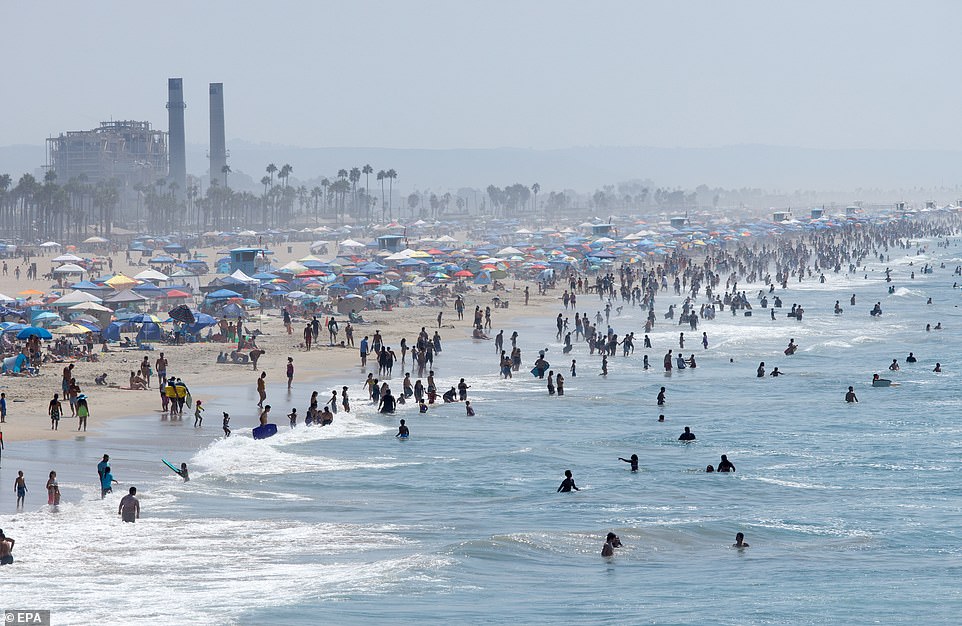