Marriage satisfaction could be in your DNA: Scientists discover a gene that plays a key role in whether or not newlyweds feel happy in the first year after their wedding

A gene has been identified which makes people happier in their relationship and more likely to have a strong and healthy marriage.

A stretch of DNA called CD38 creates a protein which has a variety of roles, including controlling the production of oxytocin — known as the cuddle hormone.

People with a specific form of this gene have traits which make them better partners, such as being grateful, trusting and forgiving.

In a recent study of 142 people — 71 newlywed couples — this resulted in a greater level of satisfaction in their relationship.

People with a specific form of this gene have traits which make them better partners, such as being grateful, trusting and forgiving. In a recent study of 142 people — 71 newlywed couples — this resulted in a greater level of satisfaction in their relationship

The gene is found at the genetic location rs3796863 and, like all genes, constitutes two parts. These alleles work in pairs and together create the gene’s final form.

At CD38 the options are either CC, AC or AA. Researchers from the University of Arkansas focused specifically on the CC variety.

Scientists recruited 142 people who had just got married and followed them through the period after the honeymoon.

Mental health problems are more likely in children who see their recently divorced parents fighting because they have a ‘fear of abandonment’, a study has warned.

Researchers from the US surveyed 559 kids — each aged between nine and 18 years — about their exposure to, and feelings towards, parental conflict.

The team found that children caught in the crossfire of a failed marriage are more mentally vulnerable — especially if they have a close relationship with their father.

According the Office for National Statistics, 108,421 couples got divorced in the UK in 2019 — around a 19 per cent increase on the previous year.

DNA samples were taken from each participant and each person filled in a questionnaire within three months of their wedding. Follow-up questionnaires were filled in every four months for the next three years.

Lead author Dr Anastasia Makhanova said: ‘We were interested in seeing if some of the reasons that people might have a harder time maintaining relationship satisfaction in the newlywed period is due to some potential underlying genetic predispositions.’

The study was conducted on Americans and researchers say the CC gene is found in around one in three (37 per cent) African Americans.

However, in US citizens with European ancestry, it is more common, with 70 per cent of this population having the CC gene.

The researchers add that their analysis shows ‘strong support’ for the theory that the CC gene is linked to a stronger relationship.

‘The reason why those with the CC genotype were more satisfied is because they were more trusting of their partner,’ the study authors add.

Dr Makhanova says that while the study does find people with the CC gene find it easier to be trusting, forgiving and grateful partners, it does not mean people with the AC or AA genes will die alone. 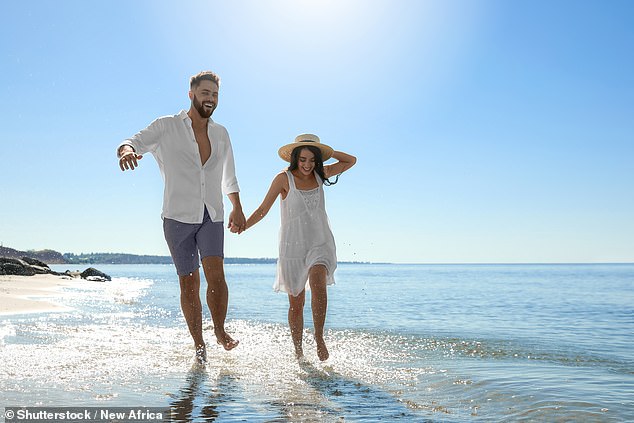 A gene has been identified which makes people happier in their relationship and more likely to have a strong and healthy marriage. A stretch of DNA called CD38 creates a protein which has a variety of roles, including the production of oxytocin — known as the cuddle hormone

‘It’s not that people who don’t have the CC genotype are doomed to have problems,’ she said.

‘It’s just that they’re more likely to have issues in some of these domains, and so those people might have to work a little bit more in those domains.’

OXYTOCIN: THE ‘LOVE’ OR ‘CUDDLE HORMONE’ THAT IS RESPONSIBLE FOR TRUST

Oxytocin, known as the ‘love hormone’, engenders trust and generosity.

The chemical is released naturally from the brain into the blood of humans and other mammals during social and sexual behaviours.

It is produced by women during labour to help them bond with their baby, and stimulates the production of breast milk.

The chemical is also released during lovemaking, earning it the nickname ‘the cuddle hormone’.

Other loving touches, from hugging a teddy bear to stroking your pet dog, also trigger the hormone’s release.