Want to be more attractive? Be generous! Study finds people who are perceived as being good-looking are more likely to give

Being generous can make you more attractive, according to a new study.

Participants were shown images of subjects and asked to rate their physical attractiveness.

Without knowing the subjects’ background, they routinely labeled people who were generous with their time as more fetching.

New research indicates that people who are giving are viewed as more attractive, even by people who don’t know about their generous nature

To find their results, a team at Indiana State University analyzed three large studies – one that took a snapshot of older adults’ attitudes and two longitudinal studies tracking adolescents, one of which followed its subjects for 54 years.

They asked two research questions: Are individuals who undertake more giving behaviors rated as more physically attractive? And the reverse, are beautiful people more likely to be generous?

To avoid the halo effect – in which attractive people are assumed to be good – the participants had no information on a subject’s giving behavior when looking at their image.

The report, published in Nonprofit and Voluntary Sector Quarterly, found that when it comes to older adults, people who volunteered and gave affection had higher attractiveness ratings. 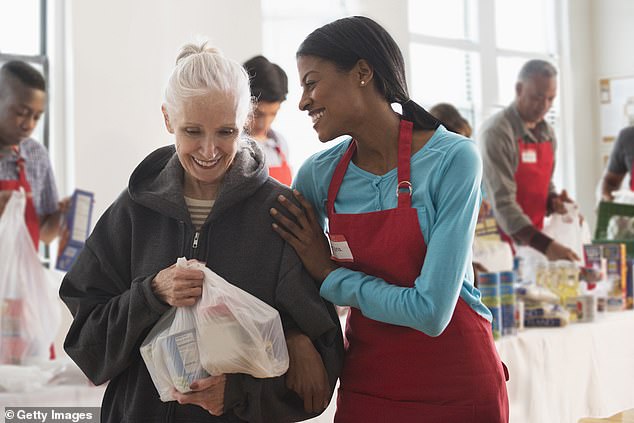 An analysis of three large studies found that older participants ranked subjects who volunteered and who showed affection easily as better looking. Younger participants also scored people with a history of volunteering as more attractive

For younger participants, those who volunteered scored higher.

Co-author Femida Handy, a professor of social policy at the University of Pennsylvania, said all three studies illustrated a consistent link between giving behaviors and attractiveness, ‘despite being conducted at different times, using different participants, and using different methods and measures.’

‘Poets and philosophers have suggested the link between moral and physical beauty for centuries,’ said co-author Sara Konrath, a professor of philanthropic studies at Indiana University’s Lilly Family School of Philanthropy.

Their research disproves the stereotype that beautiful people are vain and self-centered, Konrath said.

And it suggests that, rather than cosmetic surgery, being generous is the key to being beautiful.

‘Our findings suggest that beauty products and procedures may not be the only way to enhance an individual’s attractiveness,’ Konrath said.

‘Perhaps being generous could be the next beauty trend.’

Generosity has other benefits beyond boosting attractiveness – scientists say it can also make you happier and healthier.

A Swiss study from 2018 found that participants who gave money away reported higher levels of happiness.

And a study done at the University of Michigan found that people who regularly engaged in volunteer work were two-and-a-half times more likely to live longer than those who didn’t.

In an experiment at Harvard, students’ immune systems were elevated just by watching a video of Mother Theresa tending to the sick.

Being generous really does make people happier, according to research from an international team of experts.