It’s 10 am on a sunny Saturday morning and the family room at London’s Chelsea and Westminster Hospital is bustling. Twenty women from every stage and walk of life sit around a small coffee table stacked with open packets of Hobnob biscuits.

They arrive smiling, basking in the new discovery that they are not alone.

As the meeting continues, the women each tell of her agonising struggle, and the others nod along in unison.

This is not an AA meeting, but a patient support group for women with an itchy skin condition affecting the most intimate area of the body – the vulva, vagina and the back passage.

Plaguing almost a million British women, the relatively unknown ailment known as lichen sclerosus causes severe inflammation and irritation in the area on or near the genitals. But the skin is not just itchy. It is cracked, blistered, ulcerated and dotted with white patches

Plaguing almost a million British women, it causes severe inflammation and irritation in the area on or near the genitals.

But the skin is not just itchy. It is cracked, blistered, ulcerated and dotted with white patches. Often scars form, tightening the sensitive area and making both urination and sex agonising.

In about three per cent of sufferers, the inflamed blisters can develop into a form of skin cancer called squamous cell cancer.

How you can relieve the misery

The vast majority of these cancers are curable with an operation to remove the lump, but they can spread to nearby lymph nodes.

Now experts have warned that unnecessary embarrassment is putting hundreds of thousands at risk of debilitating and potentially life-threatening consequences.

Dermatologist and former GP Dr Shirin Lakhani says: ‘Women regularly check their breasts and it’s a subject that, thanks to national campaigns, is no longer taboo. Now it’s time for women to discuss problems with their genitals too. It could save their life.’

Dr Clare Fuller, a consultant dermatologist with a special interest in vulval health, spearheads the Chelsea support group which meets three or four times a year.

She says: ‘The groups were the idea of the patients. This condition has a tremendous impact on quality of life and patients want to speak to others who understand. Otherwise nobody talks about it.’

Emma Norman, 36, has suffered with lichen sclerosus since childhood.

She says: ‘As a teenager, going to the toilet was excruciating and using a tampon was out of the question.

‘When I went for my first smear, the nurse asked if I’d been sexually abused.

‘I wasn’t able to have full intercourse with my partner until I was in my mid-20s. Afterwards I had to leave a gap of about three months to allow the skin to heal.’

Emma, a cleaner, wasn’t diagnosed until the age of 22, when she was referred to a gynaecologist who performed a long-awaited biopsy. ‘Since then, I’ve undergone several skin grafts and I use a steroid cream once a month,’ she says.

Sadly, much of the damage to Emma’s skin is irreversible.

‘Now I have no interest in having a relationship due to tearing and bleeding during intercourse. My life revolves around containing flare-ups with a steroid cream.’

If detected early, lichen sclerosus is easily treated in most cases with a potent steroid cream to calm the inflammation.

But due to the stigma attached to the condition, most suffer in silence and remain unaware of this simple solution.

Dr Fuller explains: ‘Roughly 95 per cent of people respond to topical creams. In 20 years of working with these women, I have rarely seen a case where this is not effective.’

The condition can also affect uncircumcised men, causing similarly inflamed, itchy skin at the tip of the penis, but it is three times more common in women.

‘I’ll typically see women who say, “It’s dry and it hurts when I have sex.” What they actually have is lichen sclerosus,’ she says.

‘If untreated, the skin hardens and atrophies. It can close over the entrance to the vagina. This can make sex extremely painful, if not impossible.’

While the condition can affect other areas of the body, it appears mostly in the intimate areas. 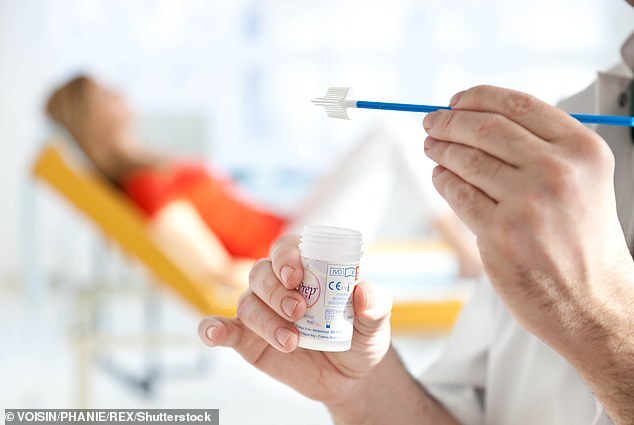 For those with the condition, scars often form, tightening the sensitive area and making both urination and sex agonising. In about three per cent of sufferers, the inflamed blisters can develop into a form of skin cancer called squamous cell cancer. (File image)

Rarely, it emerges in childhood, but more often than not diminishes when puberty hits.

For most sufferers, it develops after the menopause – and these women are blighted by both the relentless pain of their condition and agonising symptoms caused by a loss of oestrogen.

As the menopause hits and the sex hormones oestrogen and progesterone diminish, vaginal tissue becomes dry and sore and can sting.

It is thought that this hormone-related skin damage increases susceptibility, yet an absolute cause is yet to be established.

Most likely, it is the result of the immune system over-reacting, in a similar way to a skin allergy, and the body attacking healthy tissues unnecessarily.

Despite common misconceptions, lichen sclerosus is neither contagious nor indicative of a sexually transmitted infection. Nor is it a sign of uncleanliness.

According to Dr Emma Craythorne, a consultant dermatologist based at the St John’s Institute of Dermatology at Guy’s and St Thomas’ Hospital, it is exactly these stereotypes that prevent thousands from accessing vital treatment.

She says: ‘We need to change the dialogue and conversation around this genital skin condition. There is a lot of shame preventing people from getting the help they need.’

Dr Lakhani points to GP ignorance as explanation for delayed diagnoses. The Kent-based doctor often sees patients who arrive at her clinic room ‘desperate’, having spent years fighting for a diagnosis.

‘GPs are not taught nearly enough about how to recognise lichen sclerosus,’ she says.

‘The itching of the skin means it can commonly be misdiagnosed as thrush. In some cases it is only after going back and forth to the GP when topical creams such as Canesten don’t work that referrals are made.’

Referral to a gynaecologist or dermatologist is crucial because only then is a biopsy performed to rule out the possibility of skin cancer and detect the unique, telltale signs of lichen sclerosus.

Clare Baumhauer, 46, from Kent, was initially told she had herpes in 2016, before an astute gynaecologist spotted the condition a year later.

‘I was shocked – I’d been happily married for 25 years,’ says the retail assistant.

‘But then a biopsy was performed and I was told I’d had lichen sclerosus, probably since childhood. My vulva has always been white. I didn’t realise it was a classic symptom – how would I know, though?

‘I’ve been examined by GPs, midwives, nurses and no one had flagged it as abnormal.’

Thankfully, weekly use of steroid creams has dramatically reduced her symptoms.

And thousands more could be granted similar relief if Britons weren’t so prudish.

As Dr Adib says: ‘As a nation we’re uptight about vaginal health. In France, women will see their gynaecologist about any changes they’ve noticed.

‘The more we get this condition in the public eye, the more normalised it will be. It won’t carry such a stigma.’