The ‘Storegga slide’ — an underwater collapse 8,200 years ago that triggered a huge tidal wave — demolished 376 miles of Scotland’s coastline, a study found.

Had it happened in the present, with our higher sea levels, it would have demolished entire towns — such as Montrose, in Angus, which has population today of 12,000.

Researchers led from Sheffield University analysed and dated sediment deposits left behind by the ancient tsunami to model the wave’s impact on the Scottish coast.

This allowed them to reveal, for the first time, that the monstrous wave succeeded in travelling as far as 18.6 miles (30 kilometres) inland in some locations.

Researchers led from Sheffield University analysed and dated soil deposits left behind by the ancient tsunami to model the wave’s impact on the Scottish coast. Pictured: the model of the Montrose basin showing the extent of the wave’s inundation of the coast (in the darker blue)

‘Although the Storegga Tsunami has been known about for years, this is the first time we have been able to model how far inland from Scotland’s coastline the tsunami wave travelled,’ said paper author Mark Bateman of the University of Sheffield.

‘Though there is no similar threat from Norway today, the UK could still be at risk from flooding events from potential volcanic eruptions around the world, such as those predicted in the Canary Islands.’

‘These would cause a similar resulting tsunami wave due to the amount of material that would be displaced by the volcano.’

‘These models give us a unique window into the past to see how the country was, and could be affected again.’

The Storegga tsunami was triggered when submarine glacial and interglacial sediments on the coastal slopes of Norway’s continental shelf shifted.

In their study, Professor Bateman and colleagues studies deposits at Maryton in Aberdeenshire — dating the sediments with luminescence techniques.

This allowed them to determine the age, number and relative power of the tsunami waves which had struck the Scottish coast. 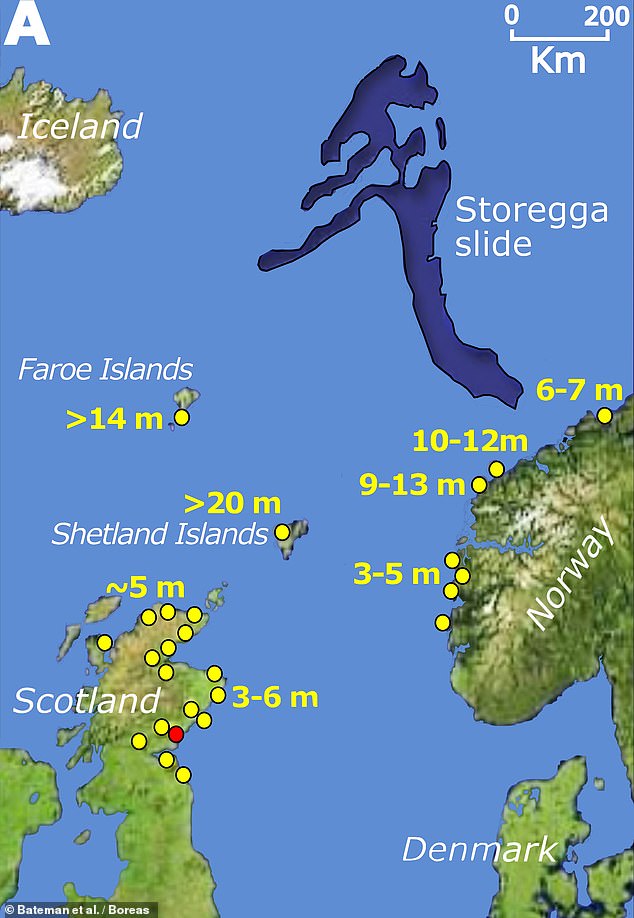 The Storegga tsunami was triggered when submarine glacial and interglacial sediments on the coastal slopes of Norway’s continental shelf shifted. Pictured: a map showing the source of the Storegga tsunami (in dark blue) with wave height estimates at various locations shown in yellow. The red circle represents the Montrose Basin study site in eastern Scotland 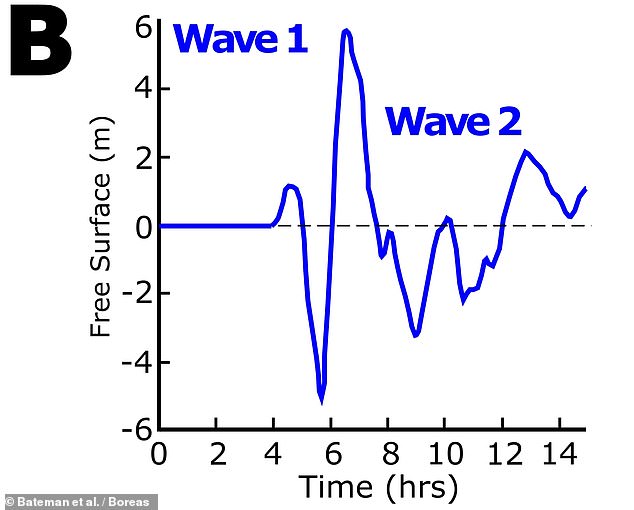 The 98-foot (30-metre) wave — which caused UK’s largest natural disaster in 11,000 years — was triggered by a 36,680 square mile landslide in the Norwegian Sea. Pictured: a model of the tsunami as would have been recorded in eastern Scotland, as based on modern bathymetry 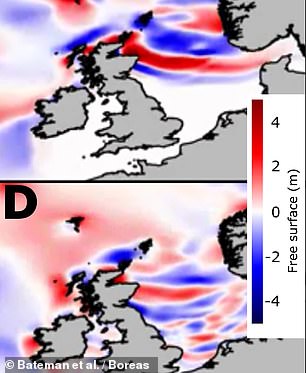 Pictured: a tsunami wave map showing the distribution of the first (top) and second (bottom) waves to hit the British coastline

‘Thirty years ago, identifying the Storegga tsunami flooding […] was seminal in recognising that submarine landslides are a major hazard,’ commented Dave Tappin of the British Geological Survey, who was not involved in the present study.

The new research, he added, ‘provides important new insights into the understanding of the Storegga tsunami flood.’

‘The research highlights the importance of applying new scientific techniques to older-studied events, thereby improving our knowledge of their impact.’

The full findings of the study were published in the journal Boreas.

THE STOREGGA UNDERWATER LANDSLIDE — THE BASICS

The sea bed can fail when physical conditions change, just as on land, creating an underwater landslide.

These mass movements of vast amounts of sediment are called submarine landslides, or ‘slides’.

The sea covers over 70 per cent of the planet and so there are probably many more offshore landslides than there are on land.

Submarine landslides can be found even on very low slope angles — as low as 1°, and mapping them underwater is difficult and expensive.

More than 8,000 years ago a massive submarine landslide occurred off the coast of Norway.

This Storegga Slide resulted in a tsunami that reached the north-east coast of Britain.

The area of the Storegga Slide is about the size of Scotland.

About 791 cubic mile (3,300 cubic kilometres) of sediment slid down — much of it as large blocks, up to a kilometre across.

Previous studies have shown that similar events have happened about every 100,000 years in this area.

However, new findings from a recent University of Dundee study suggested that smaller underwater landslides may occur much more regularly.