George and Amal Clooney are not expecting their third child, their representative has confirmed.

The actor, 60, and human rights lawyer, 43, welcomed twins Ella and Alexander four years ago after getting married during a lavish Venice ceremony in 2014.

Insiders had earlier claimed that the happy couple have already told their close friends that they were expanding their family when they threw a small dinner party near their Italian villa on July 4th.

However speaking with Just Jared on Friday, their representative shut down any speculation and said: ‘Stories saying that Amal Clooney is pregnant are not true.’

Family: George and Amal Clooney’s representative has said in a statement that the couple are not expecting their third child together after it was reported on Friday that the lawyer was pregnant (the couple are pictured on July 20 in Lake Como, Italy)

The couple were spotted out with pals on July 20, where Amal sported a form-fitting white dress.

Sparking speculation the Clooneys were adding another baby to their brood, a source had told OK! US: ‘Amal’s said to be past her first trimester. She’s already starting to show, so soon enough, everyone will know.’

Representatives for George and Amal have been contacted by MailOnline.

It was reported last month that George had whizzed his wife and their children to Lake Como ahead of the twins’ fourth birthday.

A source told E! News at the time that the family ‘haven’t been there in two years’ but they’ll be spending the summer at their family home, Villa Oleandra.

They added: ‘They brought along their giant St. Bernard puppy, Rosie. They will be spending as much of the summer as they can in Lake Como.’ 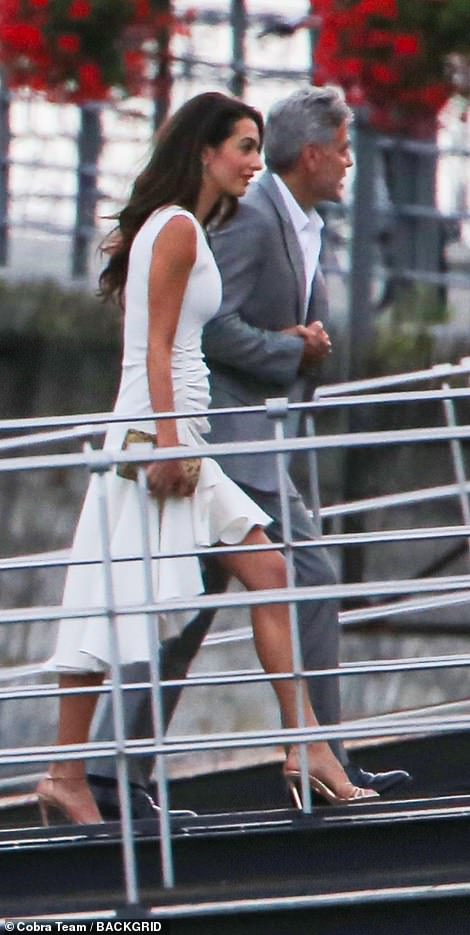 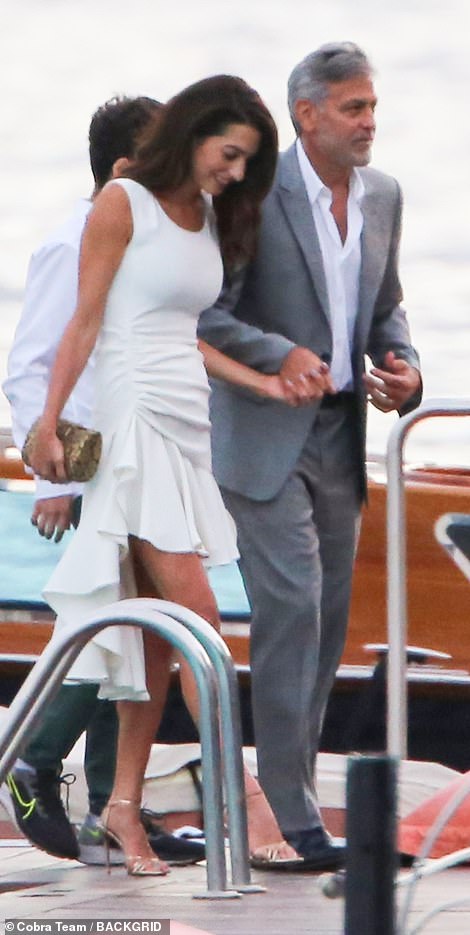 Stepping out: The couple are pictured on July 20 in Lake Como, Italy 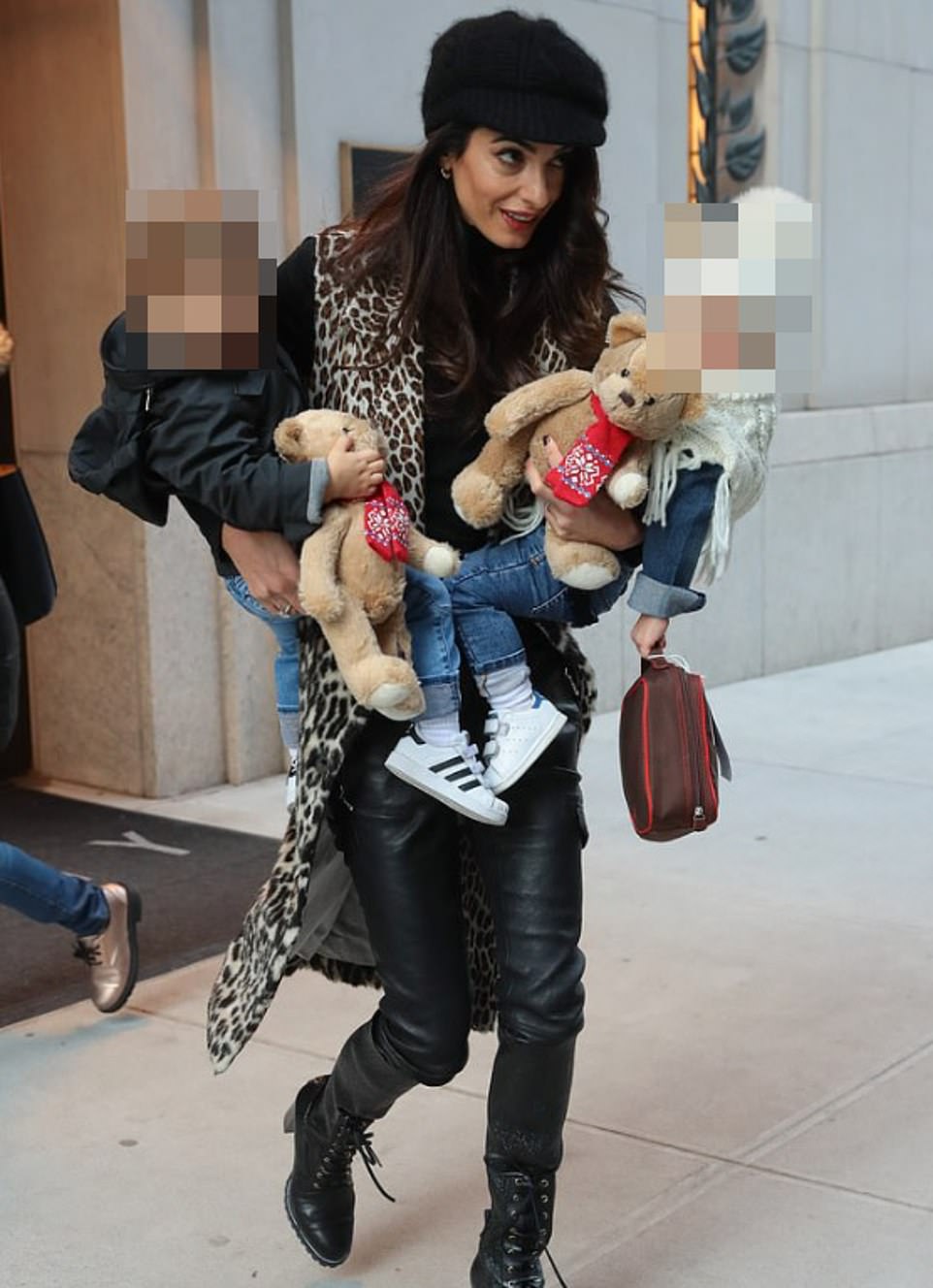 Stepping out: Amal is pictured with the couple’s kids in 2018 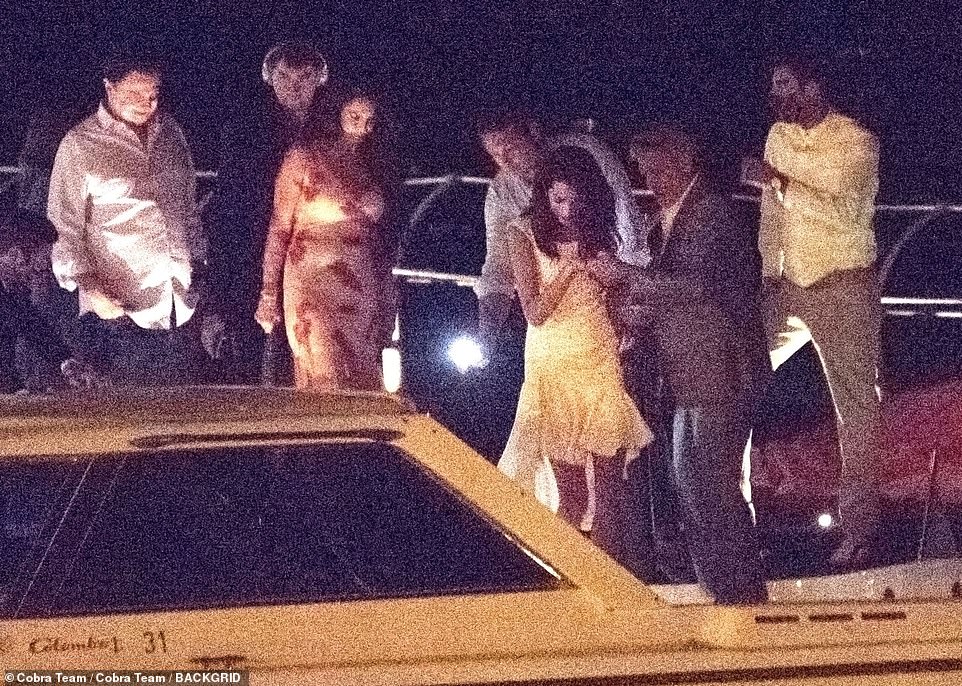 A helping hand: During their outing, Amal was assisted on to waiting boat by George

In March, George spoke about how life changed when he became a father.

He said: ”I don’t think anyone is ever going to say at the end of the day ‘God, I wish we’d done two more interesting films’ rather than ‘God, I’m really glad I spent this time with my kids or I did this with my kids.’

In December, he gave a rare into fatherhood as he spoke to AARP The Magazine about naming their twins and being a famous parent.

He said: ‘I didn’t want, like, weird-a*s names for our kids. They’re already going to have enough trouble. It’s hard being the son of somebody famous and successful… 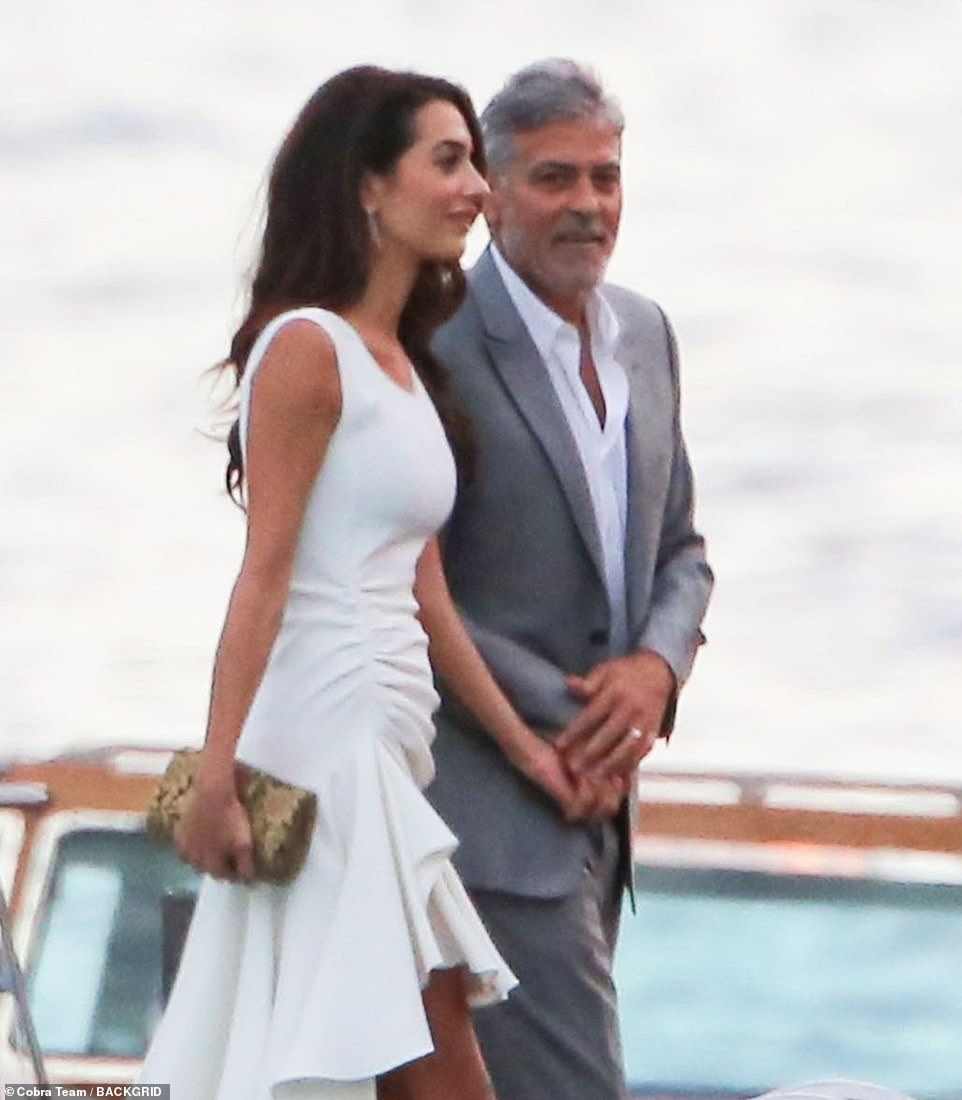 Lifestyle changes: In March, George spoke about how life changed when he became a father 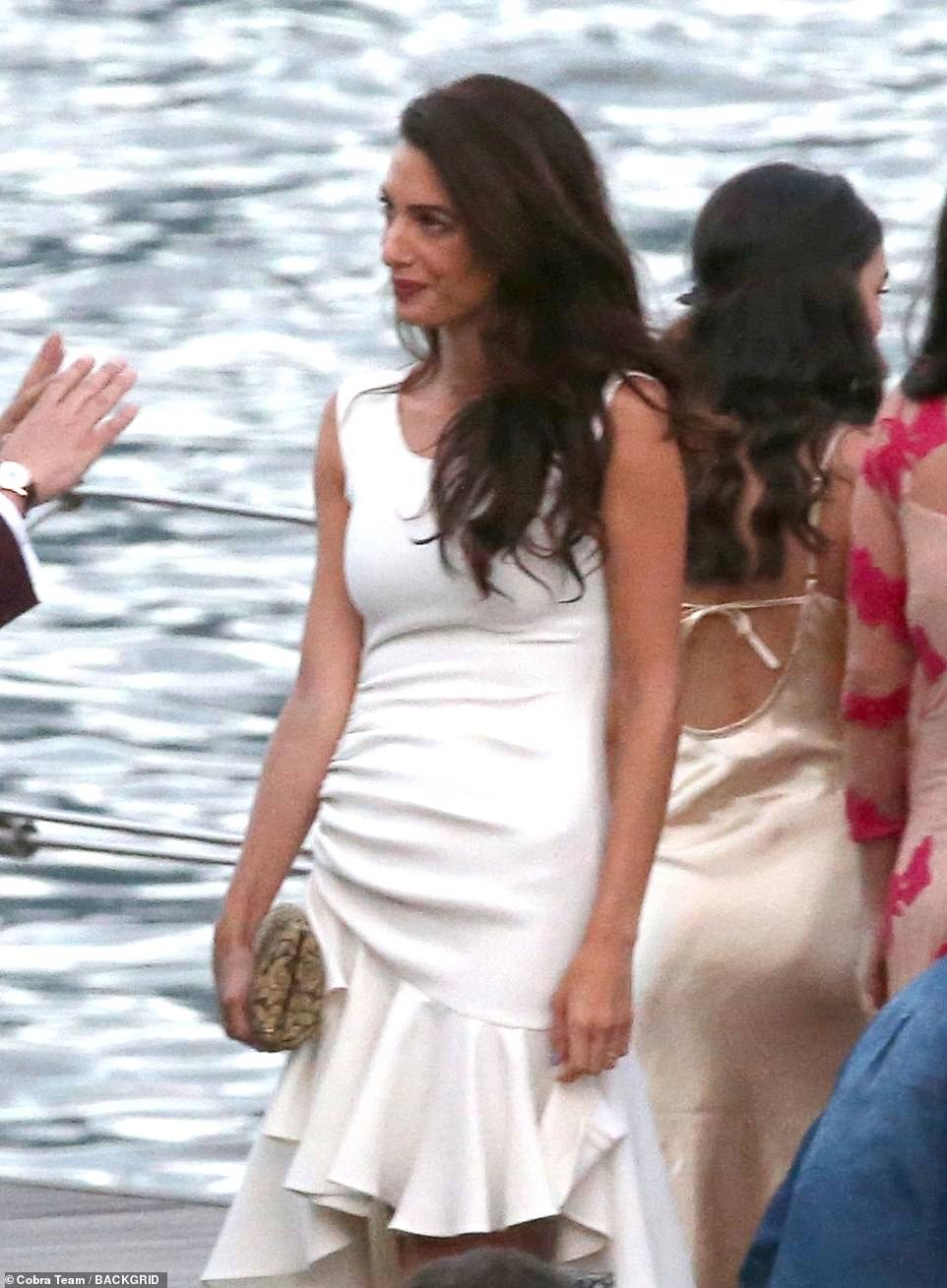 Chatting away: She looked sensational in a white dress with ruching at the waist 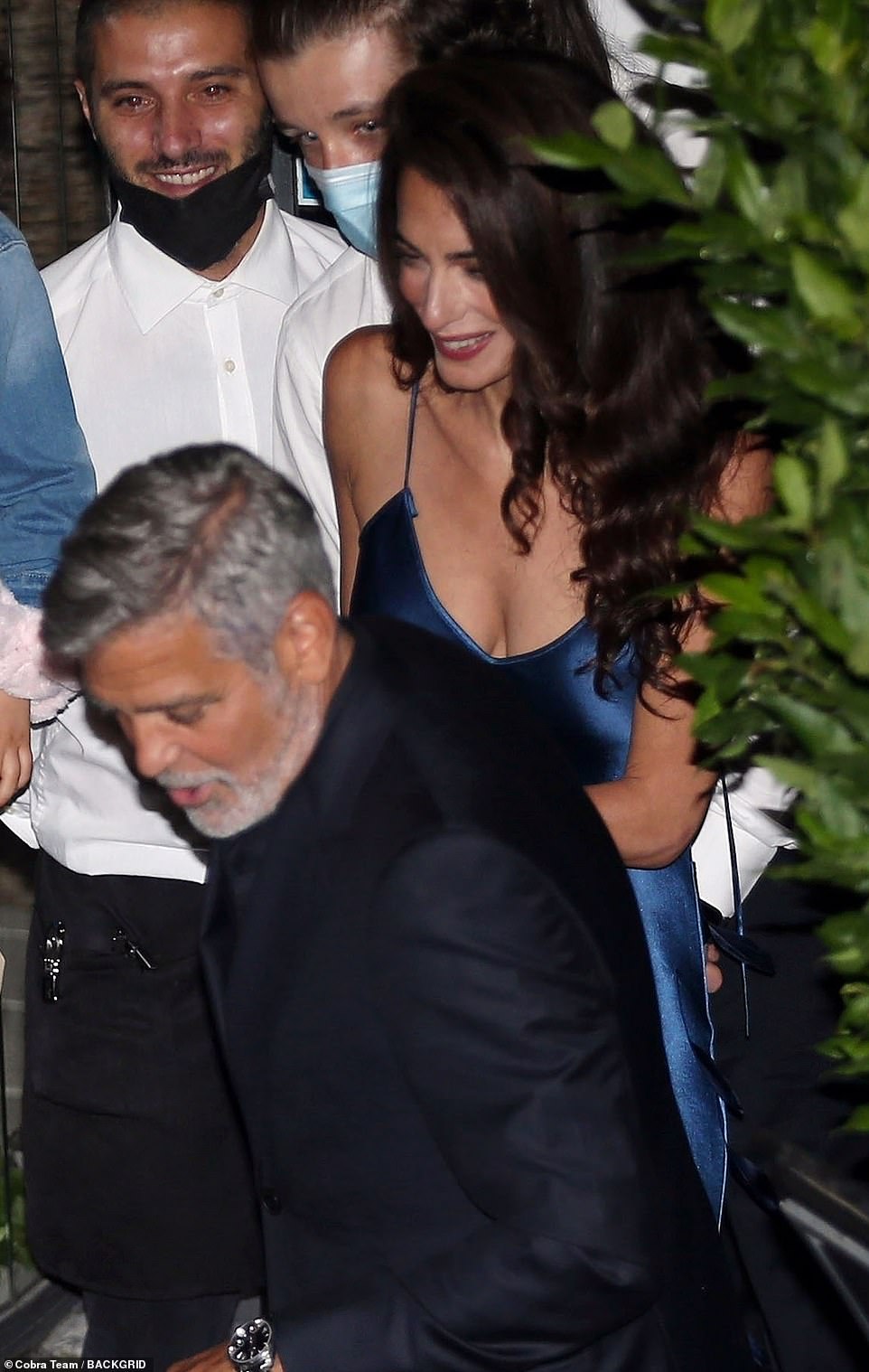 Happy couple: The actor, 60, and human rights lawyer, 43, welcomed twins Ella and Alexander four years ago after getting married during a lavish Venice ceremony in 2014 (pictured on July 4) 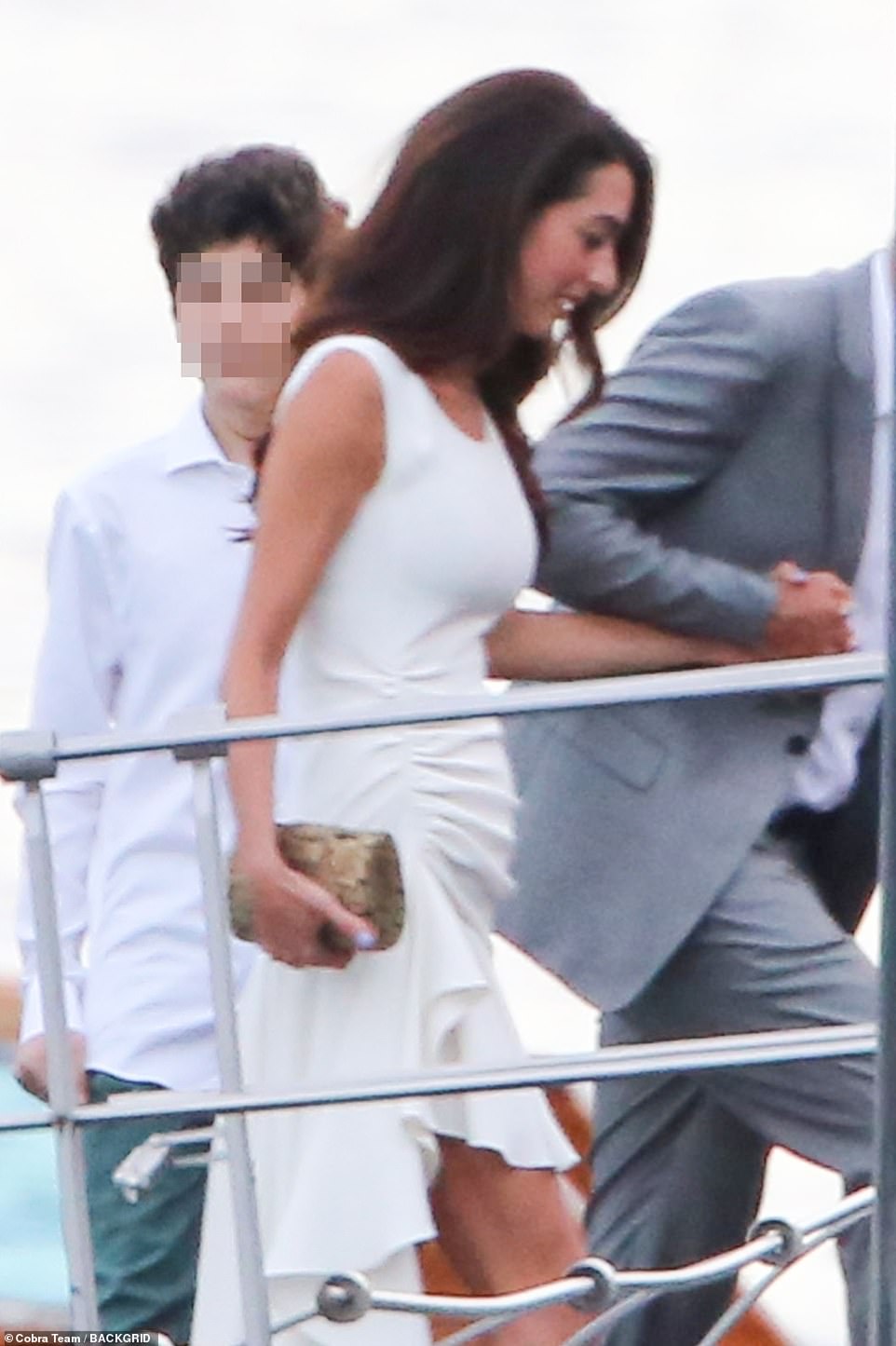 Out and about: She looked impossibly glamorous for the trip

‘Bing Crosby had two sons kill themselves. I have an advantage because I’m so much older that by the time my son would feel competitive, I’ll literally be gumming bread.’

He later spoke to CBS This Morning about how Amal and the kids changed his life.

George said: ‘There is no question that having Amal in my life changed everything for me. It was the first time that everything that she did and everything about her was infinitely more important than anything about me…

We never talked about having kids, and one day we said, ‘What do you think?’ And then we go to the doctor and you do the ultrasound and they’re like, ‘You got a baby boy!’ and I was like, ‘Baby boy, fantastic!’… 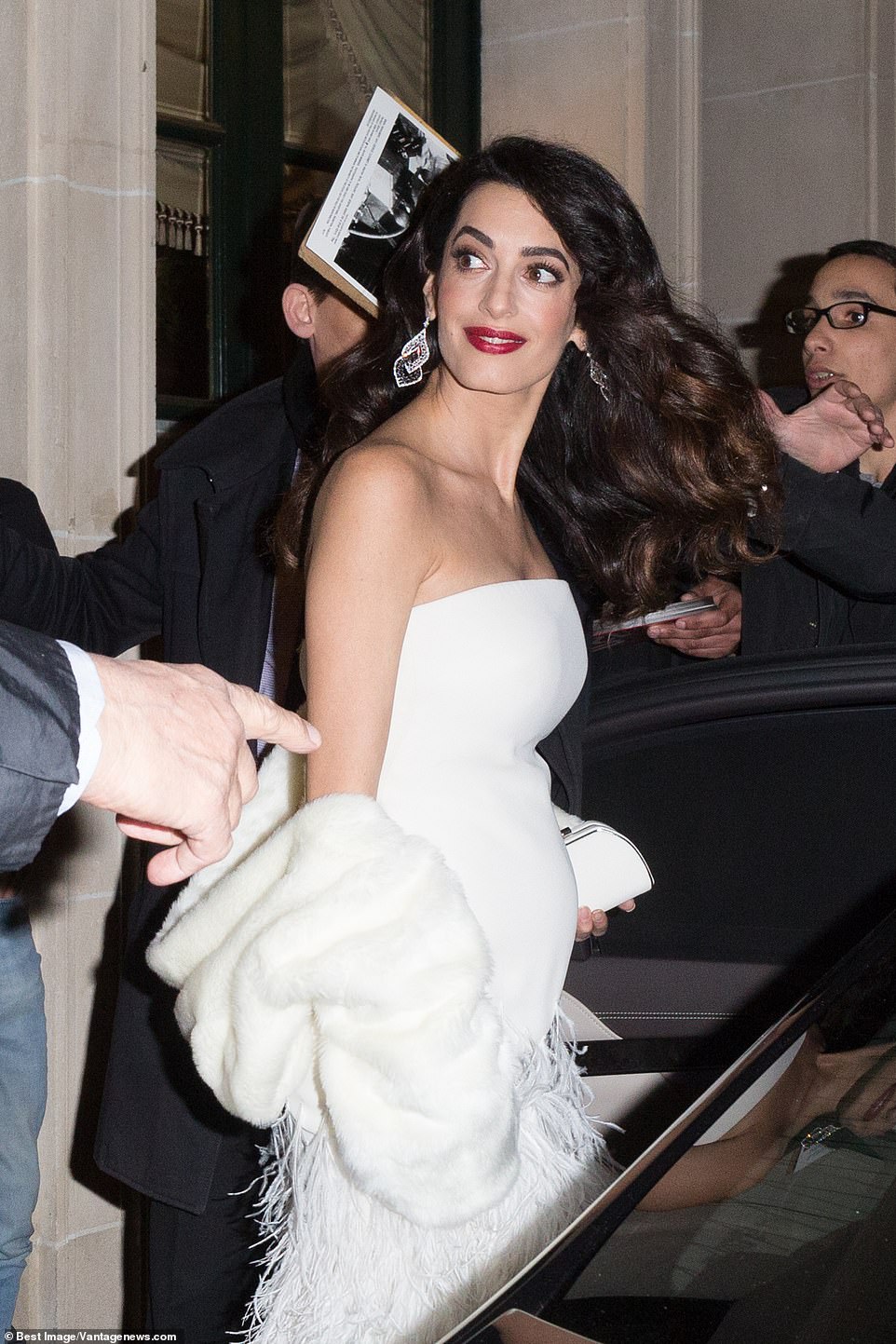 Blooming: Amal is pictured in Paris while pregnant with her twins in February 2017 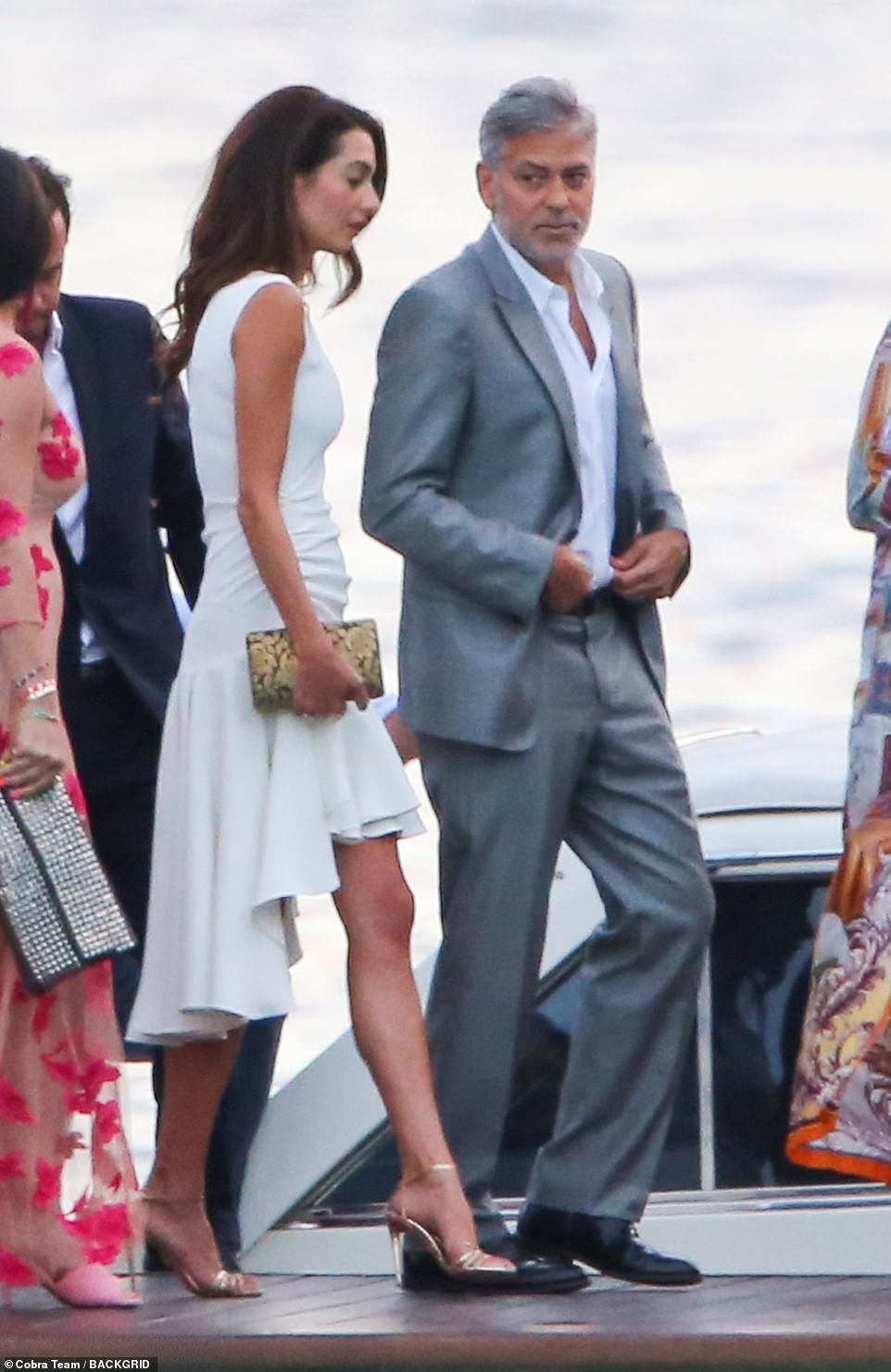 Radiant: She emerged arm in arm with her husband while looking chic in the white look 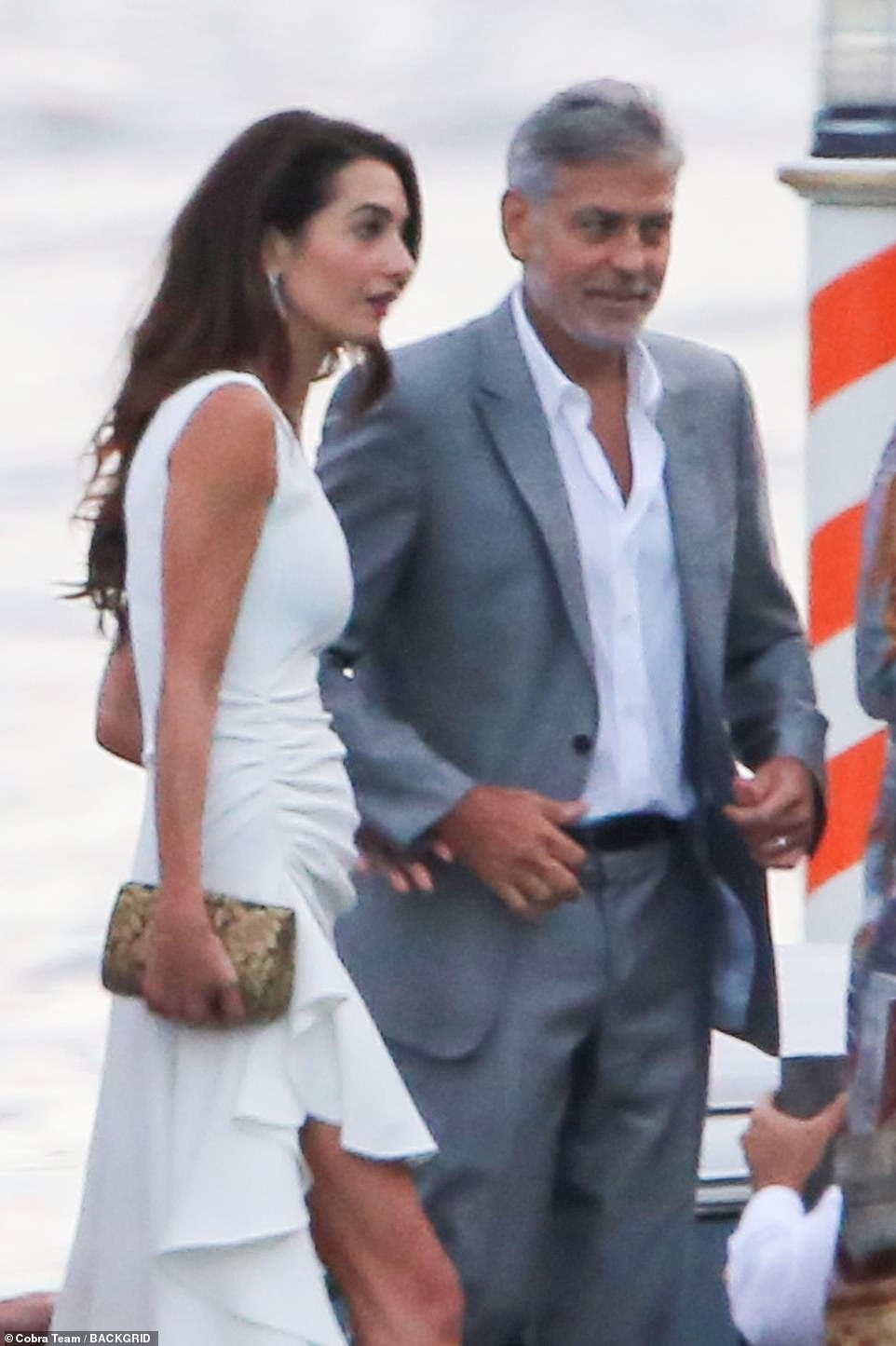 Glam: She looked stunning as she emerged with her husband 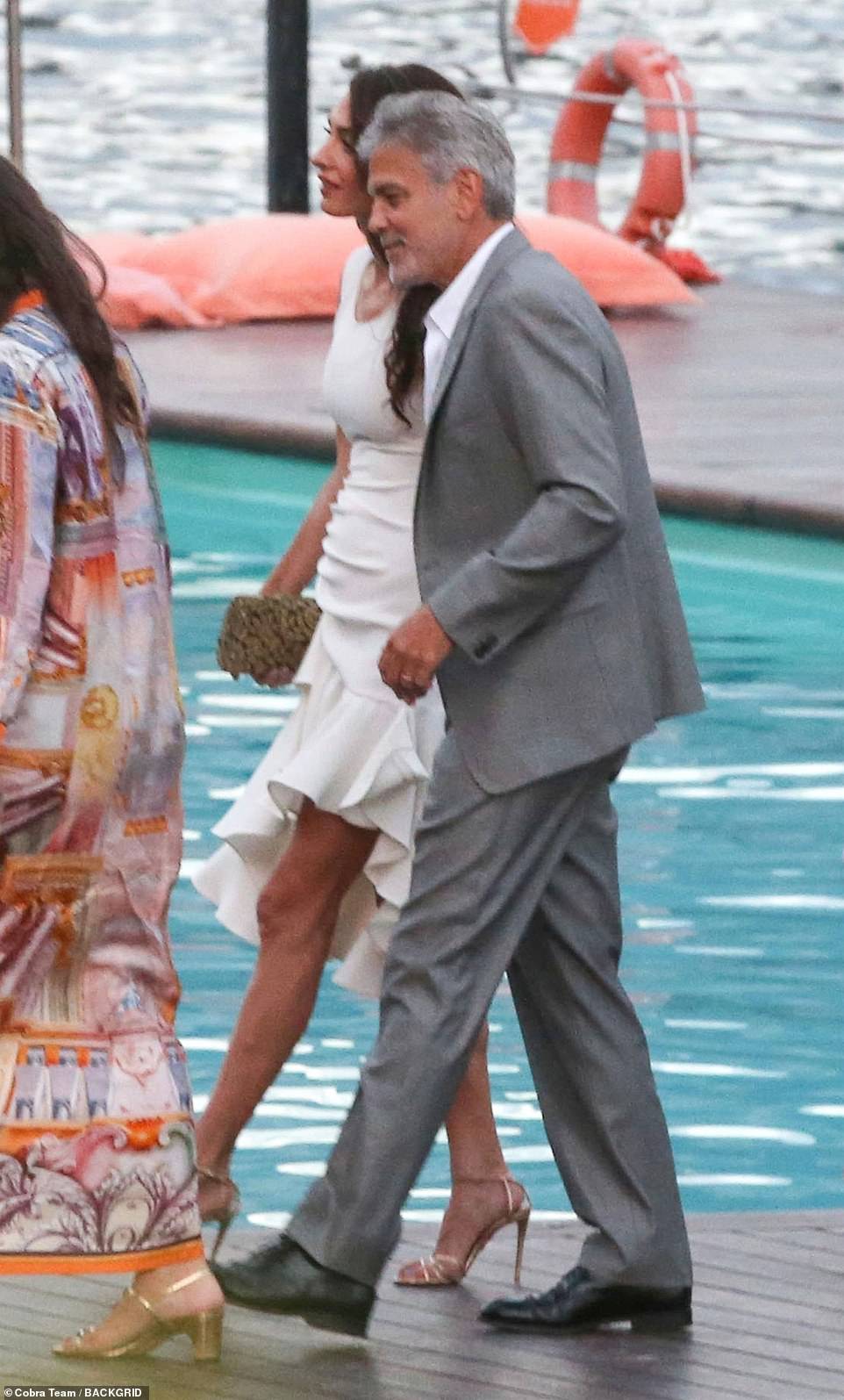 Elegant: She paired the ensemble with gold heels and a clutch bag

‘And they go, ‘And you got another one there.’ I was up for one. Again, I’m old. All of a sudden, it’s two. It’s hard to get me to not talk, and I just stood there for, like, 10 minutes just staring at this piece of paper going, ‘What? Two?’

He was later asked about why he ‘waited so long’ to become a father.

George said: ‘I found the right person to have them with,” he said. “There are some people, their goal was: ‘I have to have children.’ Mine wasn’t…

‘I wasn’t looking at life, going: ‘My life will be unfulfilled without children.’ I felt like I had a pretty full life. Then I met Amal and realised that my life had been pretty empty.

‘And then we throw these two kids in there and suddenly you realise how incredibly empty it was and, you know, it fills it all up. It makes it fun.’

He went on: ‘[Fatherhood] gives a sense of belonging, and a sense of home and the unconditional love, all the things that you were hoping you could get from a really good career and a dog. You realise that this is a lot more than that’. 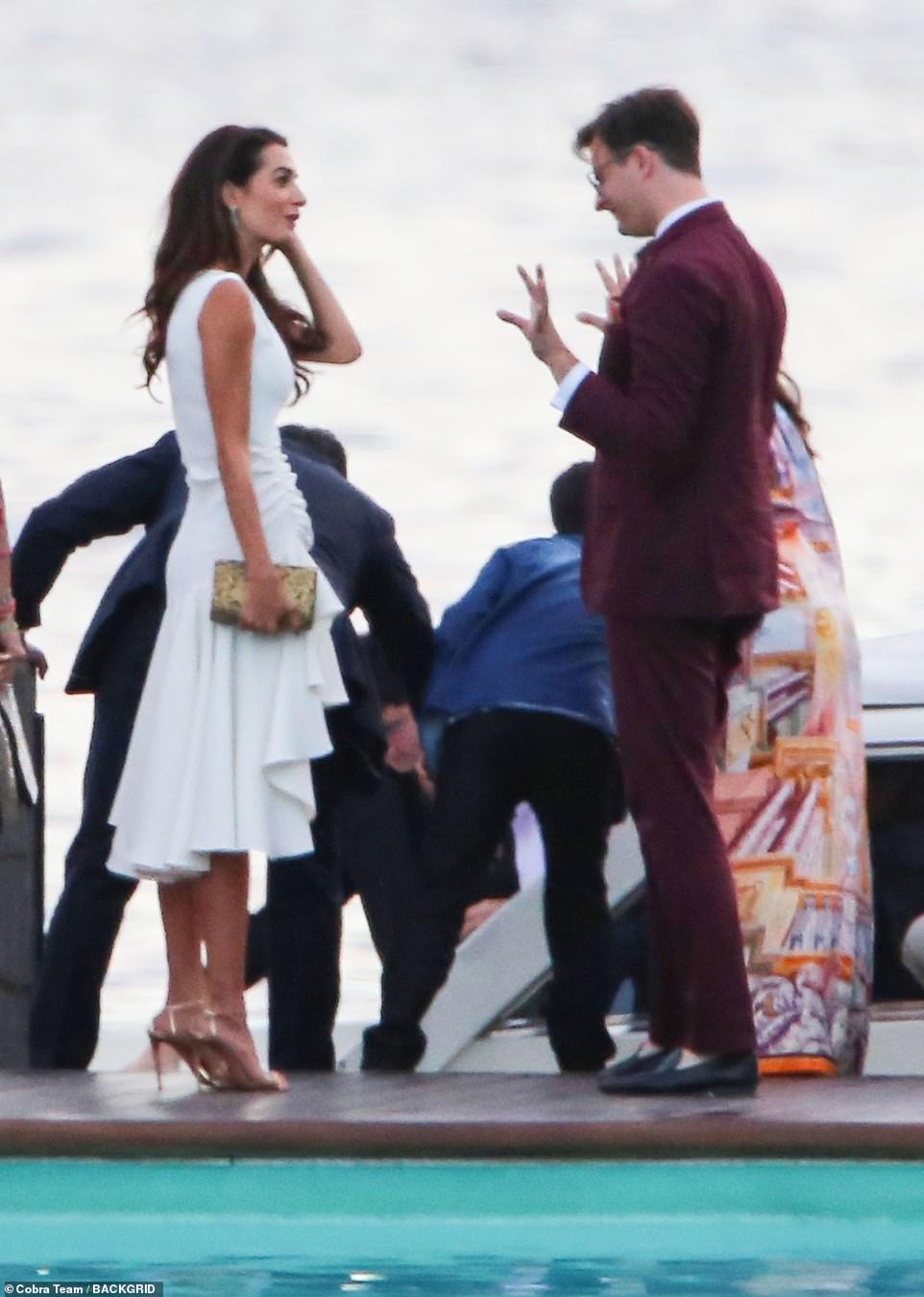 Chatting away: She was engaging in animated chats with the fellow holidaymakers 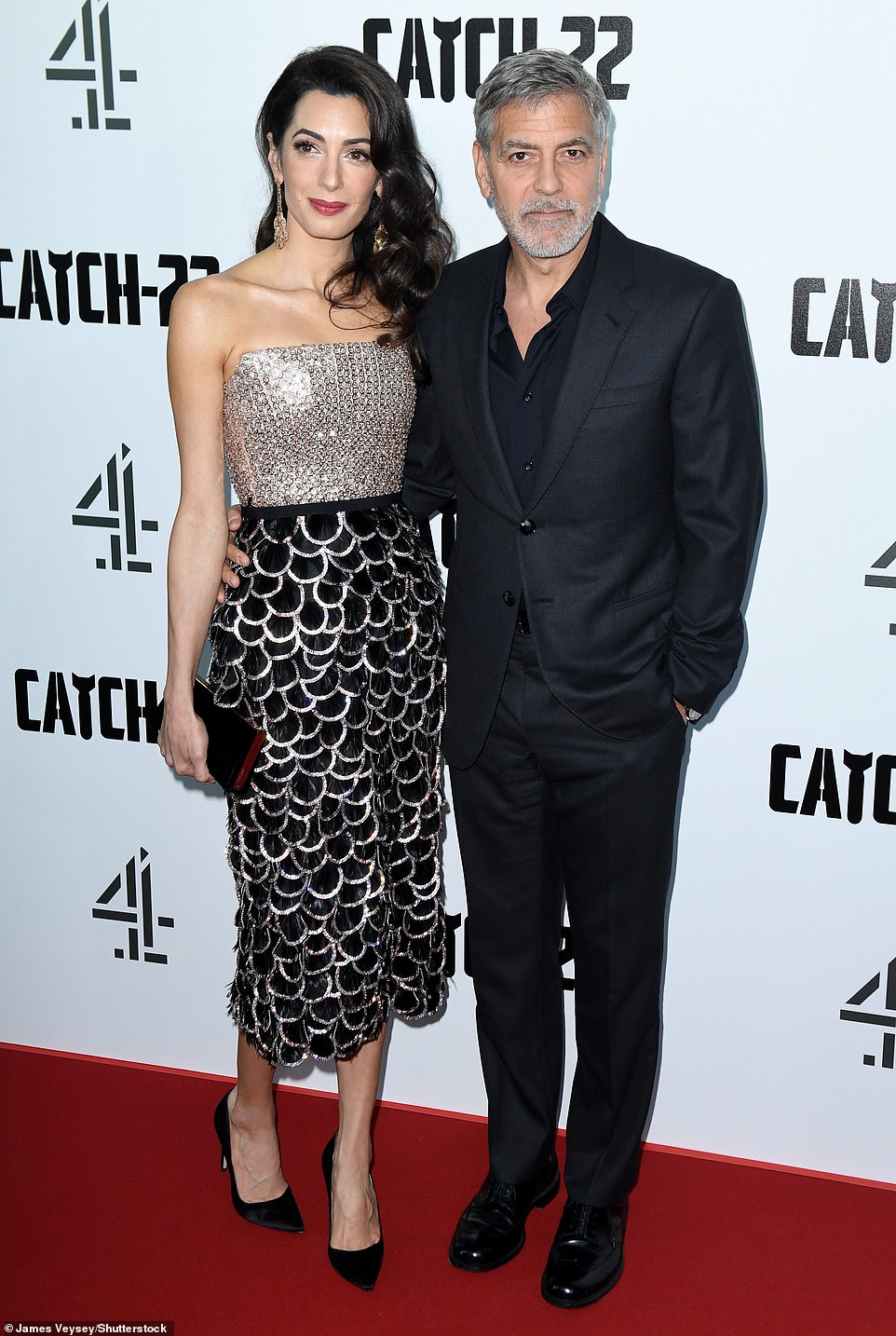 Sweet: In December, George gave an insight into fatherhood as he spoke to AARP The Magazine about naming their twins and being a famous parent (pictured in 2019)