‘For once, just DON’T do it’: Nike switches its famous slogan in new ad urging people ‘not to turn their backs on racism’ following death of George Floyd

Nike has released a new ad on social media urging people to join the fight against racism in America following the death of black man George Floyd.

The brand, famously known for its ‘just do it’ slogan, flipped its catchphrase to ‘don’t do it’ as it delivered a powerful message against police brutality and racism.

‘For once, don’t do it. Don’t pretend there’s not a problem in America. Don’t turn your back on racism. Don’t accept innocent lives being taken from us,’ the video begins.

Nike, famously known for its ‘just do it’ slogan, flipped its catchphrase to ‘don’t do it’ as it delivered a powerful message against police brutality and racism

The video was released on social media platforms on Friday following the racially motivated killings of Floyd, Ahmaud Arbery and Breonna Taylor, which have sparked protests and riots across the country.

‘Nike has a long history of standing against bigotry, hatred and inequality in all forms,’ the company said in a statement.

‘We hope that by sharing this film we can serve as a catalyst to inspire action against a deep issue in our society and encourage people to help shape a better future.’

Nike CEO John Donahoe also sent an email to staff addressing the recent killings, which he said serve as ‘a sickening reminder of what too many people live through every day in America.’ 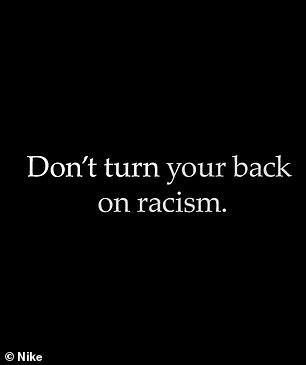 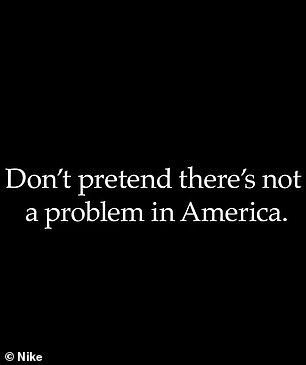 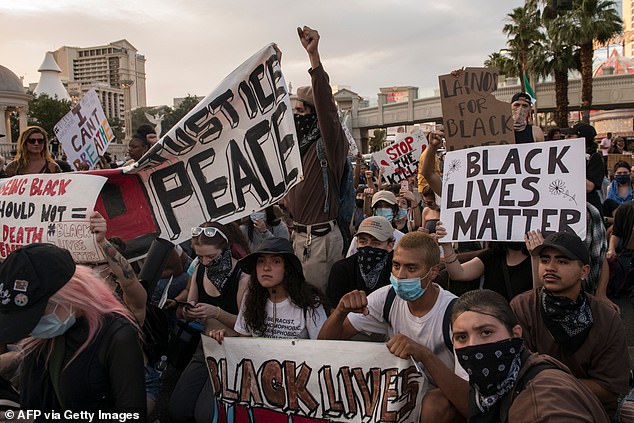 Anger over George Floyd’s death has spread across the country. Pictured: Protesters marching along the Las Vegas Strip

In the email, obtained by Yahoo, Donahoe states: ‘While Nike cannot solve injustice, I believe we have a responsibility to work toward addressing it to the best of our ability.’

Meanwhile, protests and riots have erupted in dozens of cities across America demanding justice for Floyd, who died on Monday after a white Minneapolis cop knelt on his neck for over eight minutes during his arrest.

Authorities were bracing for more violence Saturday, with some calling in the National Guard to beef up overwhelmed forces.

As anger spread across the States this week, protesters set police cars ablaze, smashed businesses’ windows and skirmished with baton-wielding officers in streets from Atlanta to Los Angeles.