Fadi Fawaz (left) said George Michael (right), 53, lay dead for a full 24 hours before he was found on Christmas Day, contrary to previous reports he had died of natural causes

Writing in a series of emails, Fawaz said: ‘It took five attempts… I’m sick and tired of people asking me what happened on Christmas Day.’

The emails, seen by The Sun, continued: ‘Let me tell you, George died on his mother’s birthday, so that might answer a few questions.

‘Not to mention it took five attempts to manage to end his life. I think it’s important for the story.’

His claims come following tweets in 2017 where he said the truth was not yet out, but his later said the tweets on the work of hackers.

Hairdresser Fadi said he found George’s body at home in Goring, Oxon, at around lunchtime. 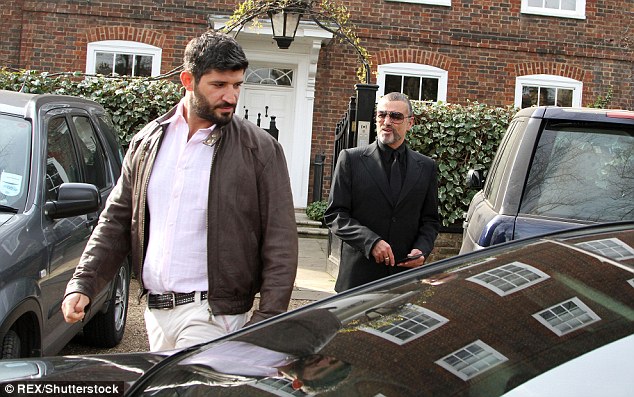 Hairdresser Fadi said he found George’s body at home in Goring, Oxon, at around lunchtime. The lovers had endured a rocky relationship and it emerged Fadi had slept in his car on Christmas Eve

The lovers had endured a rocky relationship and it emerged Fadi had slept in his car on Christmas Eve.

Despite this, a coroners report in March last year said the Faith hit-maker died of natural causes had dilated cardiomyopathy with myocarditis and fatty liver.

Fadi is currently bidding for a share of the star’s £105million estate and still lives in the plush £5million Regent’s Park home he shared with the singer.

• For confidential support in the UK, call the Samaritans on 116123 or visit a local branch. See www.samaritans.org for details.