George Osborne is on the brink of missing his borrowing targets less than a week after the Budget, official data showed today.

In a fresh blow to the embattled Chancellor, the Office for National Statistics (ONS) said the year-to-date budget deficit stood at £70.7 billion in February after borrowing fell by less than expected.

The figure leaves Mr Osborne perilously close to his £72.2 billion target for the full year.

It means that this month, the UK would have to borrow substantially less than the £7.4 billion seen a year earlier to keep the Chancellor on track with last week’s Budget forecasts from the Office for Budget Responsibility (OBR).

The figures heap further pressure on Mr Osborne after the resignation of work and pensions secretary Iain Duncan Smith in protest over his economic strategy and cuts to welfare over the past six years.

But he has since abandoned planned cuts to disability benefits in the face of accusations he was putting the better-off before the most vulnerable.

‘As the Budget showed last week, our public finances would have been in a much worse position had the government not undertaken the fiscal consolidation since 2010.

‘But the fiscal repair job is not done – we must continue to act now so we don’t pay later, taking the steps necessary to give Britain’s families economic security.’

The Office for National Statistics said: ‘In February 2016, the public sector spent more money than it received in taxes and other income.

‘This meant it had to borrow £7.1 billion to balance the books. Of this £7.1 billion, £2.6 billion were spent on the cost of the ‘day-to-day’ activities of the public sector (the current budget deficit), while it spent £4.5 billion on infrastructure (net investment).

‘Annual borrowing has generally been falling since the peak in the financial year ending March 2010. So far this financial year (April 2015 to February 2016), the public sector has borrowed £70.7 billion.

‘This was £14.0 billion lower than at the same point in the previous financial year.

‘The Office for Budget Responsibility, who produces economic and fiscal forecasts for government, expects that the public sector will borrow £72.2 billion during the financial year ending March 2016.’

The ONS figures showed borrowing fell by £0.5 billion year on year to £7.1 billion in February. 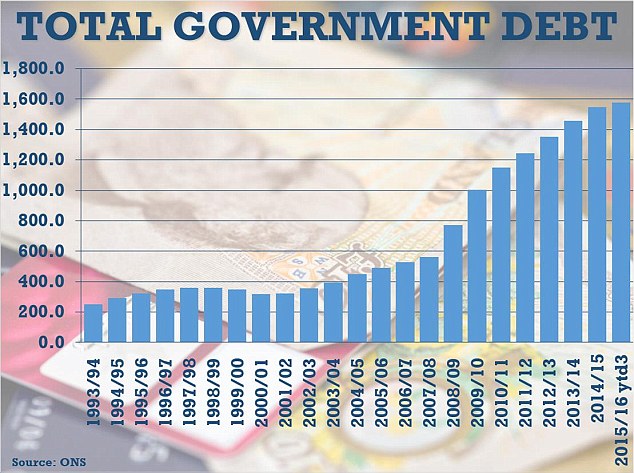 Overall Government debt has continued to rise while the deficit remains and it now stands at £1.577 trillion

Mr Osborne last week pledged to return the UK to a surplus by 2020, with the latest independent forecasts from the OBR revealing that the UK would have a budget surplus of £10.4 billion in 2019/20 and £11 billion the following year.

In a hearing with MPs on the Treasury Select Committee following the Budget, OBR chairman Robert Chote said there was still a 55 per cent chance that Mr Osborne would hit his surplus target despite the U-turn on disability payment cuts.

He confirmed the OBR would consider the impact of the changes to disability payment savings and welfare pledge when it publishes its next economic outlook.

The ONS said borrowing fell last month as the Government received £53.6 billion in income, up around 5 per cent on a year earlier thanks to higher income tax and stamp duty receipts.

The ONS said just below two-thirds was spent by central government departments, around a third went on social benefits such as pensions, unemployment payments, child benefit and maternity pay, with the remainder being spent on capital investment and interest on the Government’s outstanding debt

The Centre for Economics and Business Research said it was ‘highly unlikely’ Mr Osborne will meet his borrowing targets and aim to get Britain back in the black by 2020.

David Kern, chief economist at the British Chambers of Commerce, said: ‘While there is gradual progress in reducing the deficit, the timetables outlined in the Budget last week remain too ambitious, and the return to surplus may take a bit longer than the Chancellor hopes.

‘The difficulties in implementing some of the planned budget cuts will increase the problem.’