In 1982, after writing the gothic novel Fevre Dream, George R R Martin eagerly awaited fans at a local book signing. ‘I was sitting there with a stack of about 50 copies,’ he says, ‘waiting for something to sign.’ As the day wore on, just two people approached his table. ‘One of them only wanted to know where the photography section was,’ he admits. ‘I had to tell him that I didn’t actually work there and, by the way, would he like to buy one of my books?’

Today, Martin no longer needs to coerce people into buying his books. His fantasy novels A Song Of Ice And Fire, the basis of the hit TV series Game Of Thrones, have sold more than 90 million copies worldwide. The show airs in 170 countries and has won 47 Emmys. As for book signings – well, no one is asking Martin for directions any more. ‘I had one in Slovenia,’ he says, ‘and so many people showed up it took me seven hours to finish.’

Indeed, the volume and intensity of fandom for Martin’s work has ramped up so much that in some ways he has become a victim of his own success. Fans constantly approach him (one over-exuberant admirer came at him with a pair of scissors, intending to cut off a lock of his hair as a memento until Martin’s assistant hastily intervened), while many more have been unpleasantly vocal – and rude – about the speed at which he writes.

Martin has completed just five of the proposed seven novels in the Song Of Ice And Fire series (the TV show has already leapfrogged the action in his books), and given that the fifth novel, A Dance With Dragons, was published seven years ago, some fans have been furiously demanding when the sixth instalment, The Winds Of Winter, will arrive. Websites have sprouted up decrying Martin’s tardiness in delivering the novel, with some fans bluntly exhorting the 70-year-old author not to die before completing his opus. ‘And that’s a real sore point with me,’ Martin admits. ‘I was at a conference in Estonia when someone asked, “What happens if you die and the books are incomplete?” Jesus, what a question! My wife tore into him, saying, “This is the man I love. How dare you ask that?” I’ve recently lost five close friends at a rate of about one every three months, so it’s been a little too much. It does give you a sense of your own mortality and I don’t need people reminding me of it.’

For the record, on The Winds Of Winter he says: ‘It’s certainly my hope that it’ll be complete next year. But I don’t make promises any more, because when I can’t deliver it, people get so angry.’

A sturdy chap with a full grey beard and infectious giggle, there is something of Santa Claus about Martin, making him impossible to miss in his adopted home of Santa Fe, New Mexico. He’s also extremely accommodating, happily over-running our allotted interview time, which may partly explain why he doesn’t have enough hours in the day to get everything done. As well as The Winds Of Winter, Martin is working on five Game Of Thrones spin-offs (including one prequel, The Long Night, starring Naomi Watts and Poldark’s Josh Whitehouse), another TV show and a possible adaptation of Fevre Dream. ‘We’ve talked about doing it as a ten-part series for television and we’re all very excited about it.’

Game Of Thrones has completely changed Martin’s life. When his fourth novel, The Armageddon Rag, flopped in 1983 he was in debt and studying for an alternative job in property. Now, largely due to the show, he is said to be worth £50 million.

It comes to an end next year and viewers will finally discover the fates of the Targaryens, the Starks, the Lannisters and, of course, the fire-breathing dragons. Martin, who remains scrupulously tight-lipped about the story’s dénouement, says: ‘I rather wish it wasn’t ending so soon. This will be the eighth season, but we could easily have gone to 13 if they’d stayed closer to the books.’

But while viewers hotly debate the end of the series, Martin in the meantime has managed to conjure up Fire & Blood, a 700-page accompaniment to the Game Of Thrones saga. Set 300 years before the events of the TV series, it is the first in a two-part history centring on the Targaryen family and the civil war that almost ended their dynasty. It is trademark Martin – densely plotted and teeming with characters. ‘I do have charts and previous books that I have to consult from time to time to keep track of everyone,’ he admits, ‘but I still make mistakes. Fans will catch the most trivial thing, such as a character wearing a blue doublet on one page, which becomes green later on.’

While Fire & Blood brings us no closer to knowing how Game Of Thrones will end, there are some clues – and possible red herrings – along the way. One arrives in the form of Alysanne, the beloved Queen of Westeros who travels north on the back of her dragon Silverwing. The book tells how three times Alysanne tries to take Silverwing beyond the Wall, ‘but every time she veered back south again and refused to go’. A bad omen, perhaps for Queen Daenerys, in the final season? ‘Yeah, that one could have some meaning,’ admits Martin. ‘Dragons have their own wisdom and there are some things they just don’t want to do.’ 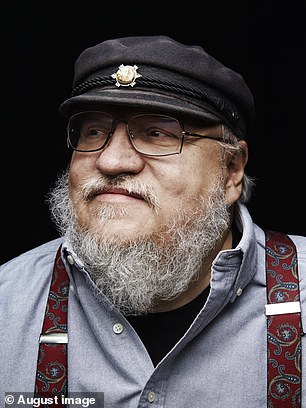 During the Vietnam conflict, Martin was a conscientious objector, yet wars and violence thread their way through his books

Daenerys’s journey throughout the course of the epic has relevance to Martin’s own life. The son of a longshoreman, he grew up in poverty in Bayonne, New Jersey. His mother would often tell him stories about her grandfather, who made a fortune in the construction business then lost it in the Great Depression. ‘They lost all their money – the house, the dock, everything – and when I was a kid I would hear all these tales of vanished prosperity,’ he says. ‘We didn’t own jack s***, but we had this past that had been taken away from us and some day, I thought, I would rise to great glory and get it back. I sometimes think that’s where the whole idea of Daenerys Targaryen, the exiled princess, came from.’

Living close to the docks also imbued young George with a desire to travel. But it was reading sci-fi and fantasy novels that took him to his most fantastic, if unreal, places.

During the Vietnam conflict, Martin was a conscientious objector, yet wars and violence thread their way through his books: ‘If you’re doing a war story, you have to be honest about the nature of war.’

By the mid-Seventies, Martin was working as a teacher while continuing to write, but the sudden death of his friend and fellow fantasy author Tom Reamy made him re-evaluate his life and he took up writing full-time. He achieved moderate success, but when The Armageddon Rag failed commercially after being touted as a potential bestseller, he feared ‘they were going to repossess the house’. Fortunately, Hollywood came to the rescue, turning his 1985 sci-fi novella, Nightflyers, into a low-budget movie, ‘and that really saved my life’.

It is Game Of Thrones, however, that has sent Martin’s success through the roof, but which has also piled on considerable pressure.

‘And there is more pressure now,’ he says, ‘especially with The Winds Of Winter, because that is where the expectations live. I know everybody’s waiting for the next book, and the last thing I want is for people to say it’s a disappointment. I’m slow, even when I’m working at full speed.’ He concedes some of the delay in completing the series is his own fault. ‘When the show started in 2011, my fame and visibility ratcheted up tenfold and I was offered all these interesting projects. Suddenly people were offering me free trips to Asia and France and South America. I said yes to far too much and overestimated my ability to juggle all that stuff and still get the work done. So, mea culpa.’

His wife, Parris McBride, has been his biggest support, and with strong female characters a signature of his work, also one of his greatest inspirations. They met during a sci-fi convention in the Seventies. They don’t have children, not by choice, but by circumstance – ‘years and decades went by until age just caught up with us’.

Does he feel that his books are in some way his children? ‘Yes, to some extent they are.’

Those children have done well for themselves, picking up countless awards, although he was miffed to be pipped to the prestigious Hugo Award in 2001 by J K Rowling. ‘Not only did she not show up,’ he grins, ‘but she didn’t delegate anyone to accept it on her behalf. They had to draft a random children’s librarian from the audience to accept it.’

Given that Game Of Thrones will finish showing on TV long before Martin completes the final two books, will he alter his ending in any way? ‘No,’ he insists. ‘I’m not changing anything. There are probably around 20 characters who are dead on the show but alive in the books, and some of those characters I’m going to be killing too, shortly.’ He had a hand in casting back in 2007 but says he never pictures the actors when writing his characters.

He is, however, a great fan of Peter Dinklage, who plays Tyrion Lannister, saying ‘it’s one of the greatest castings in the history of TV’.

The show has turned its actors into stars but Martin himself remains ambivalent about his own celebrity. ‘We all dream of fame and fortune, and while I thoroughly endorse fortune, fame is definitely a double-edged sword. I’m glad this happened to me when I was in my 60s. Can you imagine if this happens to you when you’re 17 years old?’ He hopes, however, to ‘handle it’ for another 15 to 20 years, ‘finish the series, write a lot more books and TV shows and outlive my characters’. There might even come a time, he conjectures, ‘when people have largely forgotten me’.

Somehow I doubt it.

‘Fire And Blood’ by George R R Martin (HarperVoyager) is published on Tuesday, £25