George Soros admits the EU is in ‘existential crisis’

Billionaire anti Brexit campaigner George Soros today admitted that the EU is in ‘existential crisis’ because of its failure to reform.

The financier also warned that it could take five years for Britain to fully quit the Brussels bloc and thrash out a new deal.

The business magnate – an outspoken critic of Brexit who funds the Remain group Best for Britain – reiterated his view the UK’s departure will be ‘damaging’.

But he admitted that the Brussels project could fall apart after a series of highly damaging blows to the EU.

He said: ‘Everything that could go wrong has gone wrong. It is no longer a figure of speech to say that Europe is in existential danger; it is the harsh reality.’

In a speech at the European Council on Foreign Relations think-tank event in Paris today, he said that Best for Britain will be publishing their manifesto fleshing out their demand for a second vote on the Brexit deal ‘in the next few days’.

His comments come after The Daily Mail reported that Best for Britain is launching a £5.6million plan to thwart Brexit.

Leaked papers reportedly reveal the group will contradict whatever final agreement Theresa May strikes with Brussels – arguing it is ‘not what we voted for’.

Who is George Soros and why is he known as the man who broke the Bank of England?

George Soros had already made a fortune and a formidable reputation by 1992.

But that was when he secured his tag as the ‘man who broke the Bank of England’.

Short selling US$10billion worth of Sterling during the Black Wednesday crisis made him a reported profit of £1.5billion.

The 87-year-old Hungarian-born financier is now one of the world’s richest men.

His wealth was estimated by Forbes magazine last year at £25billion.

Mr Soros has previously warned that Brexit will be a disaster for the economy, and suggested the UK could immediately apply to rejoin the EU.

One of Mr Soros’s foundations gave the money to Best for Britain, a Remain group that wants to force a second EU referendum.

Over the past 40 years he is said to have donated £11billion to philanthropic causes.

Mr Soros said the financial crisis of 2008 followed by the chaotic response to the huge influx of refugees in 2015 had led many young people to ‘regard the EU as an enemy that has deprived them of jobs and a secure and promising future.’

He also said the EU’s role in foreign affairs and diplomacy has taken battering after Donald Trump pulled out of the Iran nuclear deal.

He said the move by the American President  was ‘effectively destroying the trans-Atlantic alliance.’

He added: ‘This development will put additional pressure of unpredictable force on an already beleaguered Europe – It’s no longer a figure of speech to say Europe is in existential danger.’

Mr Soros also warned that the election of right-wing populist Viktor Orban in Hungary is challenging the very principals the EU was funded on.

He said: ‘Viktor Orban based his entire re-election campaign on falsely accusing me of planning to flood Europe, Hungary included, with Muslim refugees.

‘He is now posing as the defender of his version of a Christian Europe, that is challenging the values on which the European Union was founded.’

And he also predicted that Britain’s departure from the  bloc will be a drawn out process that could take five years. 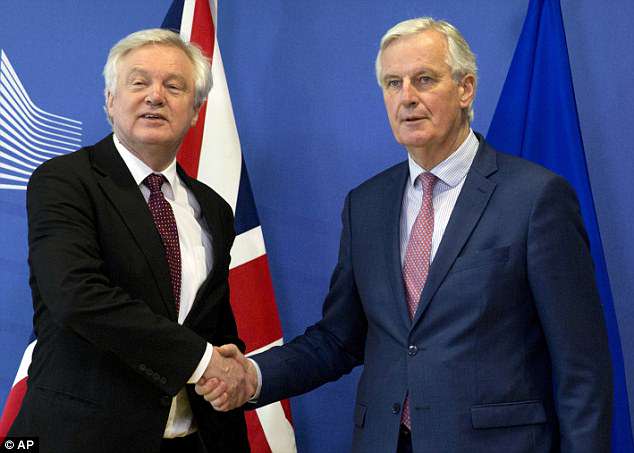 Brexit Secretary David Davis (pictured with EU negotiator Michel Barnier at the March summit in Brussels) is negotiating Britain’s departure from the bloc. But George Soros warned that it could take many years of wrangling before Britain fully quits

He said: ‘Brexit is an immensely damaging process, harmful to both sides.

‘This divorce will be a long process, probably five years, which is an eternity in politics.’

He added: ‘Ultimately it’s up to the British people to decide what they want to do, but it would be better if they came to a decision sooner rather than later.

‘The economic case for remaining a member of Europe remains strong, but it will take time for that to sink in.

‘In the meantime, the EU needs to transform itself into an association which nations like Britain would want to join.’

Mr Soros said the EU should try to salvage its project by abandoning the euro and funding a 30 billion euro Marshall Plan for Africa to ease the flow of migrants to the continent.

He said: ‘The euro has many unresolved problems and they must not be allowed to destroy the European Union.’