George W. Bush reads with his granddaughters before bed

Jenna Bush Hager’s daughter received a very presidential tuck in this week when their grandfather George W. Bush stopped by their New York apartment to read them a story.

Jenna, 35, happily captured the sweet moment and posted snapshots of her 71-year-old father spending quality time with her daughters Mila, four, and Poppy, two, on her Instagram Stories Wednesday evening.

Great grandpa: Jenna Bush Hager took to Instagram stories on Wednesday evening to share a photo of her father with her daughters Mila, four, and Poppy, two 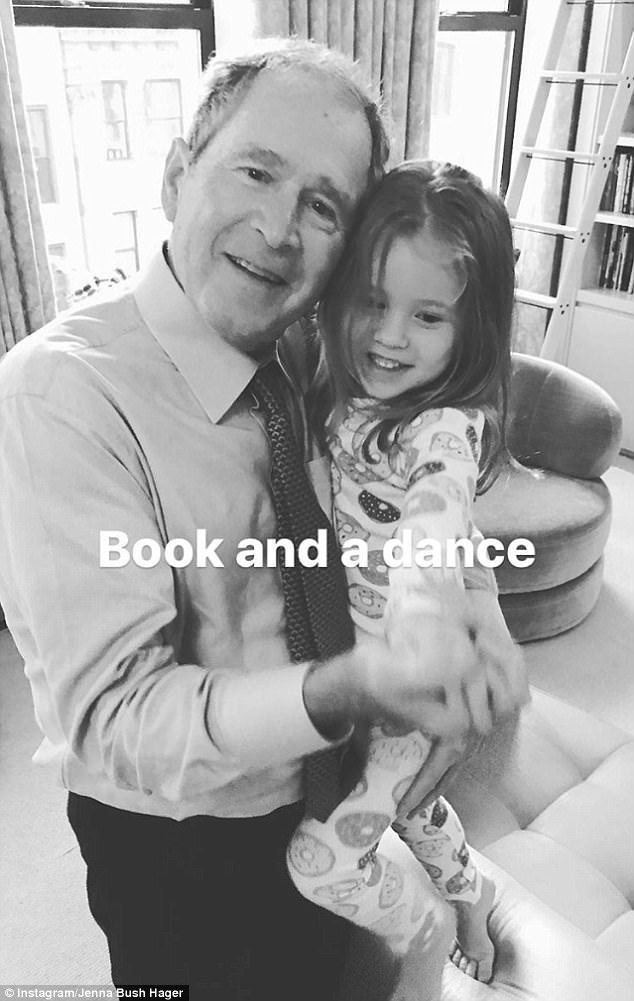 Too cute: Former president George W. Bush danced with a delighted Mila and read her a book before her bedtime 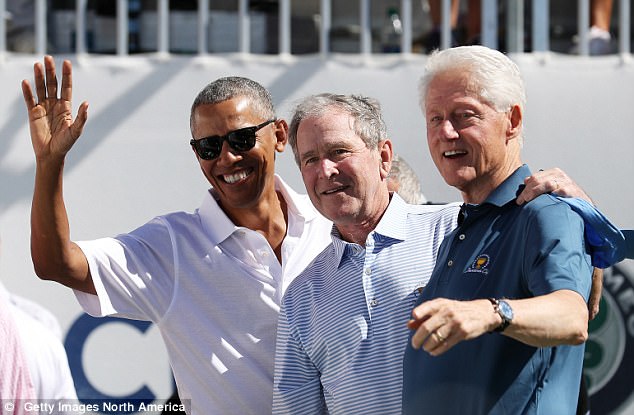 Surprise! On Thursday, he attended the Presidents Cup golf tournament in New Jersey along with his fellow former presidents Barack Obama and Bill Clinton

While their grandfather is decked out in a button-up shirt and tie, the girls are in matching pajamas featuring colorful doughnuts.

Jenna’s father looks particularly amused by Mila, who appears to be waving a blanket in the air. The photo was topped off with a heart that Jenna had drawn over her dad and daughters.

In the second image, Mila’s grandfather is leading her in a dance, as they can continue to have some pre-bedtime fun.

‘Book and a dance,’ Jenna captioned the black and white snapshot.

Bush, who lives in Dallas with his wife Laura, was in town to attend the Presidents Cup golf tournament, making an appearance at the event alongside his fellow former presidents Barack Obama and Bill Clinton – much to the delight of spectators and photographers alike.

Smiling and waving happily, the trio posed for photos with players and wives on each team during the opening ceremony on Thursday.

It is the first time three US presidents have attended the matches at the same time since this event began in 1994, named after the highest office in the land. 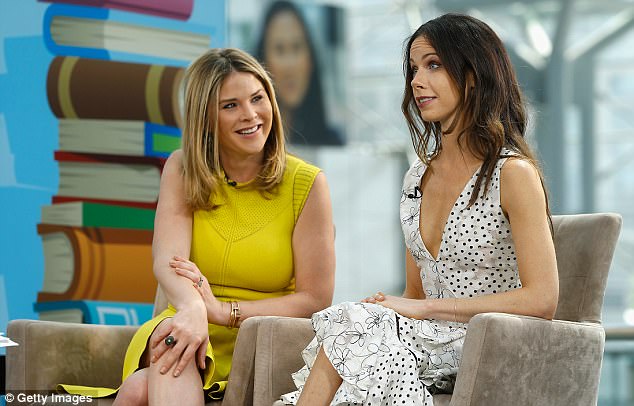 Support system: Jenna (left) has previously praised her father for raising her and her twin sister Barbara Pierce Bush (right) to be strong, independent women, calling him a feminist 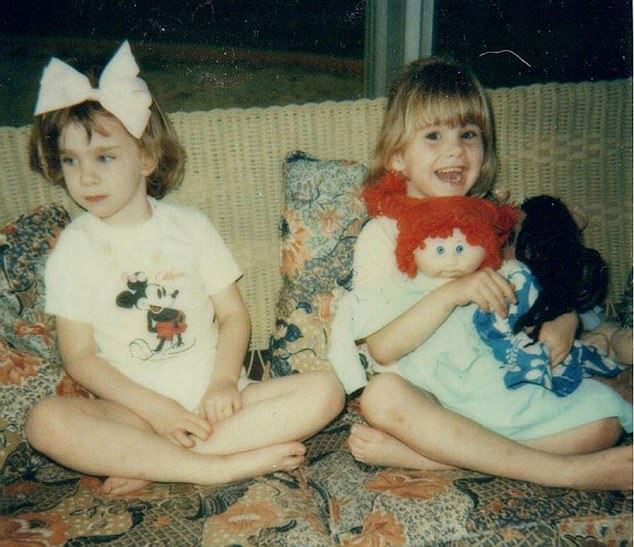 Throwback Thursday! Jenna (right) recently shared this old photo of herself smiling gleefully next to her sister Barbara (left)  in 1986 when they were five years old

Jenna has previously praised her father for raising her and her twin sister Barbara Pierce Bush to be strong, independent women.

‘People laugh at this, but I think my dad was a feminist,’ she told People. ‘He showed us that we could be whatever we wanted to be.

‘I want my girls to feel that way. I want them to feel strong and capable and feel like they can conquer the world.’

Earlier this month, Jenna celebrated her close-knit relationship with her fraternal twin by posting a hilarious throwback photo that shows the duo when they were just five years old.

Taken in 1986, the adorable photo captures young Jenna hugging a Pippi Longstocking doll with a gleeful smile, while her sister Jenna looks distractedly to the side, wearing a giant white bow atop her blonde curls.

‘TBT: B and me from 86’… happiest memory with my sissy,’ the Texas-born mother-of-two captioned her photo, before plugging her upcoming book that she has written with sister Barbara. 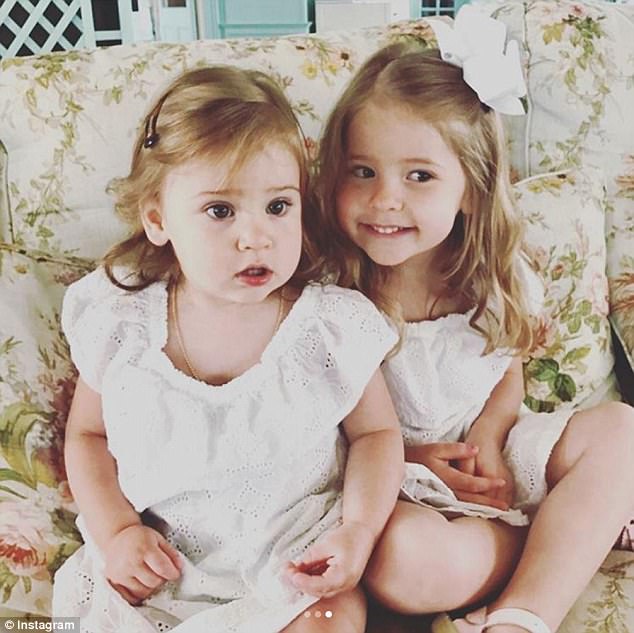 Look alikes! Jenna’s children Poppy (left) and Mila (right) look just like mom and aunt Barbara when they were younger 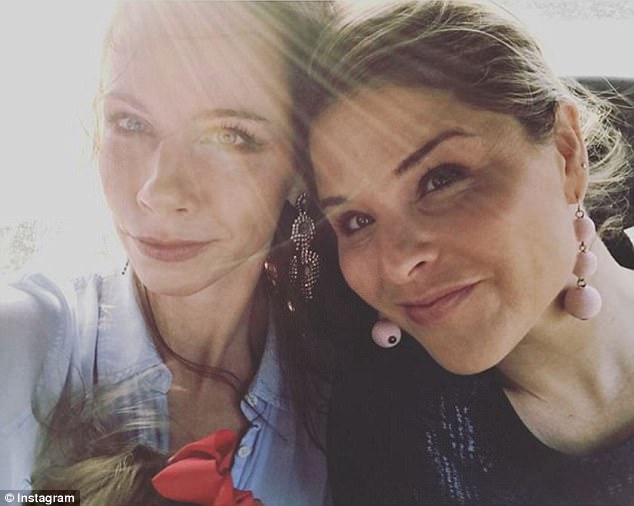 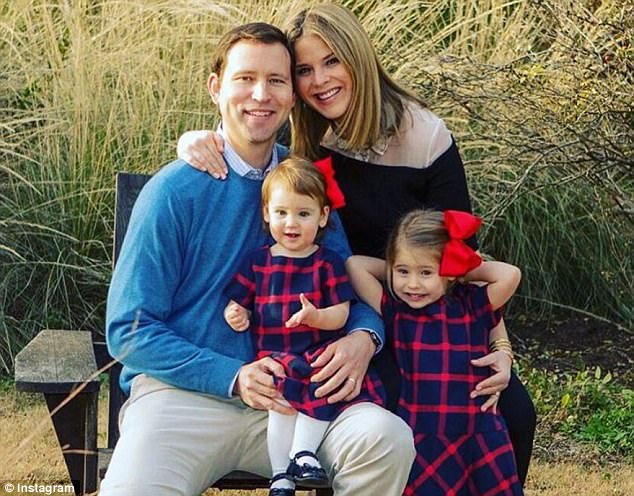 The next generation: The little girls donned dresses and red bows tied in their hair for a picture with their mom Jenna and dad Henry Chase Hager

The heart-warming shot reveals an uncanny similarity between Jenna and Barbara, and Jenna’s daughters Mila and Poppy, who share the blonde tresses and curious light eyes as Jenna and her sister.

The two were all smiles with the older one giving a wide-mouthed grin to show off her exciting book, much like mom Jenna’s jaw-dropped pose in her throwback photo.

The little one looked similar to Barbara, the older of the twins, in the photos wit a similar button nose and side cast glance.

Aside from mommy duties and seeing her children off to the new school year, Jenna and Barbara have been busy touring to promote their upcoming book, as with Jenna’s latest Instagram, entitled, Sisters First: Stories From Our Wild and Wonderful Life.

The book, scheduled for an October 24th release, will reveal a collection of stories essays penned by the duo that confess the secrets of their early days in the White House with their grandfather George H. W. Bush and parents Laura and George W. Bush in office.