Only two English golfers in the last 100 years have won the Open more than once, and both of them were knighted on the strength of their achievement.

This weekend, at the age of just 25, Georgia Hall has the chance to join Sir Henry Cotton and Sir Nick Faldo and become the first woman to complete the feat.

Three years after winning the title in nerveless style at Royal Lytham, the Bournemouth lover of the links was in her element once more — following up her opening 68 with a 69 to assume the halfway lead on seven under par at the AIG Women’s Open alongside American Mina Harigae, who is looking for a maiden win of any kind, let alone a major.

Georgia Hall is in prime position at the halfway stage of the Open, leading on seven under par

Surely helping Hall is the fact a more familiar Carnoustie is expected to emerge over the weekend after two days when the players have been aided by an almost unnerving calm. Now the wind is meant to pick up and heavy rain to fall this afternoon. As far as Hall is concerned, bring on the Beast of Angus.

‘I think it’s time it got a bit windy,’ she said, with obvious relish. ‘That’s when it gets interesting for spectators. I’m quite excited to play in it. Obviously it makes it a lot harder but that’s what you want, a true test.’

Hall looked as if she would march into a clear lead when she reached nine under par for 14 holes before a double bogey at the difficult par four 15th.

No wonder she was pleased with her characteristically unruffled response, given the difficulty of the final three holes.

‘Anything can happen over that stretch, so I was pleased with three pars and the way I played those holes,’ she said. 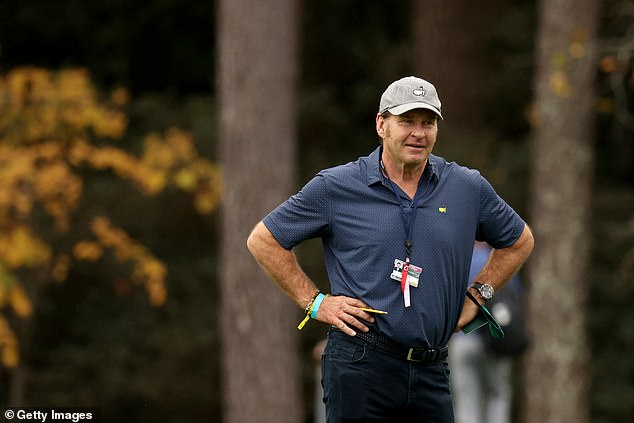 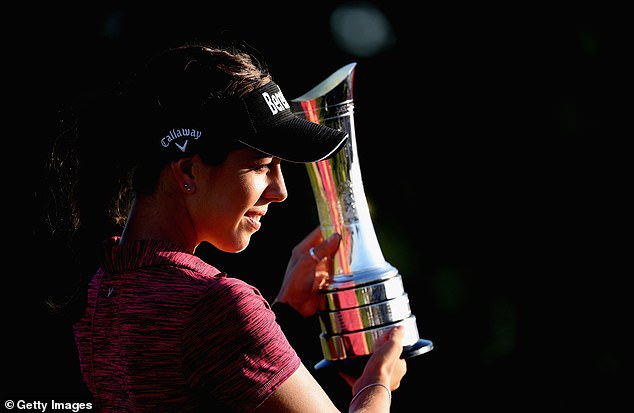 ‘What happened at the 15th was obviously annoying given how well I was playing but if you’d offered me a 69 before going out, I’d have bitten your hand off. This is a fantastic course and I’m happy where I am.’

What about Nelly the Elegant (kudos to our headline writer for that one)? For the first time in three months, there were one or two clumsy missteps from the world No 1 Nelly Korda, as her scoring average of 67 for her last 21 rounds took a heavy hit with a 73.

The 23-year-old Floridian is only three shots off the pace, however, and it will be fascinating to see how she fares if the weather does turn inclement.

One shot nearer to Hall is Leona Maguire from Ireland, whose breakthrough year will surely lead to a Solheim Cup debut next month.

The 26-year-old from Cavan spent more than two years as the world’s best-ranked amateur and is now starting to show a similar level of comfort in the pro game. Needing a good score to get into the hunt, she certainly did that with a bogey-free 67.

Dame Laura Davies, now 57 and playing in her 41st Open, made the halfway cut on level par following a remarkable 70 but not so Charley Hull, despite showing plenty of pride with four birdies in her last seven holes for a 71. 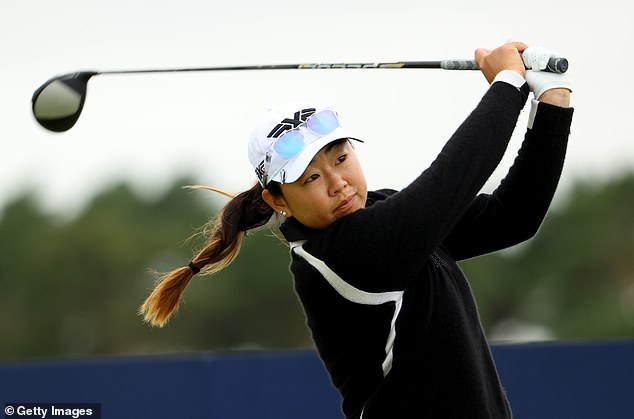 The 25-year-old from Kettering left herself with too much to do after opening with a 77.

Scottish amateur Louise Duncan, 21, coped commendably following her stunning first-round 68 with a 73 to remain inside the top 20.

Davies, whose sole success in this event came way back in 1986, was full of praise for Hall. ‘This course reminds me a lot of Lytham in its strategic demands and we know what Georgia did there,’ she told Sky Sports.

‘I don’t expect her to back off. She might be unlucky and get some bad breaks but I think she’s got a heck of a chance.’

World No 4 Sei Young Kim is just one shot off the lead, with US Open champion Yuka Saso two strokes adrift and a couple of useful Scandinavians in Madelene Sagstrom and Nanna Koerstz Madsen also among those on a crowded leaderboard.

Expect some separation today, with tougher pin positions and a dramatic shift in the weather. Time for Carnasty and a wholly different kind of Open.