A guest at a Georgia hotel was arrested Wednesday night following a tense 12-hour standoff with a SWAT team.

The incident began unfolding at the Araamda Inn on Oakbrook Parkway in Gwinnet County in the afternoon when 39-year-old Marin Fernandez was ejected from the extended stay hotel for trespassing after he allegedly refused to pay his bill and check out.

According to police, Fernandez pleaded with hotel staff to allow him to retrieve his possessions from his room, and when they let him back in, reported CBS46, the man allegedly barricaded himself inside and refused to leave.

Police and SWAT officers responded to Araamda Inn in Georgia after a guest, Marvin Fernandez, barricaded himself inside a room

The management of Araamda Inn called 911 and when police arrived, Fernandez allegedly informed the officers that he was armed with a gun and that they would have to break down the door to get him, as Atlanta Journal Constitution first reported.

A SWAT team was then summoned to the scene and the hotel was evacuated, leaving several families with children waiting in the parking lot for hours without food or water.

The unwelcome guest was arrested on suspicion of theft of service and criminal trespass. As of late Thursday morning, his name was absent from the Gwinnett County Jail’s list of current inmates.

No one was injured during the incident and Araamda Inn has since reopened. 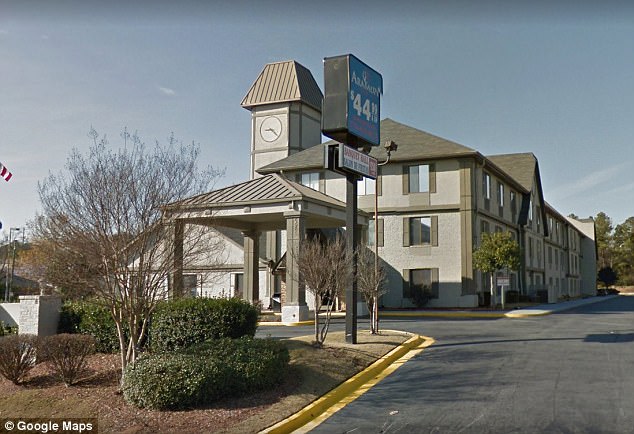