Georgia man, 21, who taunted cops in a viral TikTok video is tracked down and arrested

Georgia man, 21, who taunted cops in a viral TikTok video saying ‘come get me’ after they pleaded with the public to help locate him is finally tracked down and arrested for ‘selling cocaine’

William Reeves Durga, 21, was arrested by LaGrange police on Friday, two days after he mocked them in a viral TikTok video

A Georgia man wanted by police has been arrested two days after he posted a video to TikTok taunting cops for failing to find him.

William Reeves Durga, 21, was apprehended by LaGrange police on Friday and charged with sale of cocaine and use of a communication facility during the commission of a felony.

Earlier this month, officers had shared a post to Facebook asking the public for help in locating Durga as part of a drug investigation.

The police’s appeal read: ‘Reeves is 21 years old, approximately 5’6′ and 140lbs. Anyone with any information regarding his whereabouts should contact the LaGrange Police Department’.

The post was accompanied by several old mugshots of Durga.

On Wednesday, an arrogant Durga surfaced on social media, poking fun at the police post.

He shared a video to TikTok that showed him dancing shirtless in front of a superimposed image of their appeal for help.

‘Come and get me b**ch,’ Durga wrote to police.

The video quickly went viral and was viewed more than 3.7 million times. 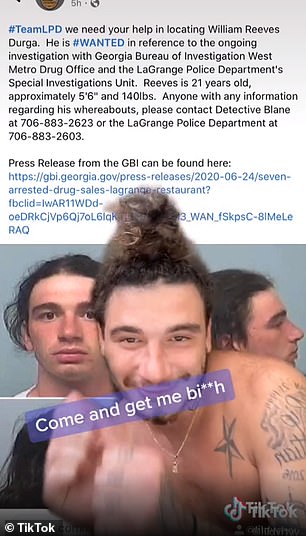 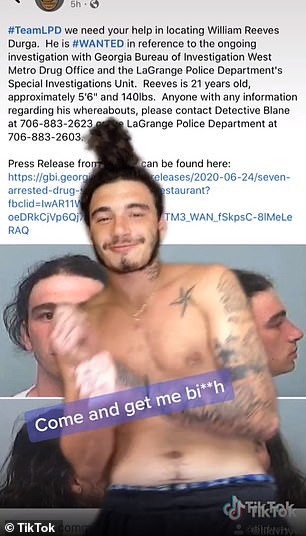 On Wednesday, an arrogant Durga surfaced on social media, poking fun at the police post, by dancing in front of a superimposed image and writing ‘Come and get me b***h’

Durga gave an interview with The New York Post about his very public taunt to the police, stating: ‘I haven’t been running, they never came to my house or anything,. They straight blasted me on social media, so I did it back.’

The youngster said he would not willingly turn himself in at the county jail as ‘it is so nasty and full of coronavirus.’

‘They haven’t been doing the necessary things to keep it contained. It’s beyond overcrowded, nobody gets a court date, it’s just wrong how the inmates are treated,’ he additionally claimed.

Durga did not tell The New York Post of his whereabouts. 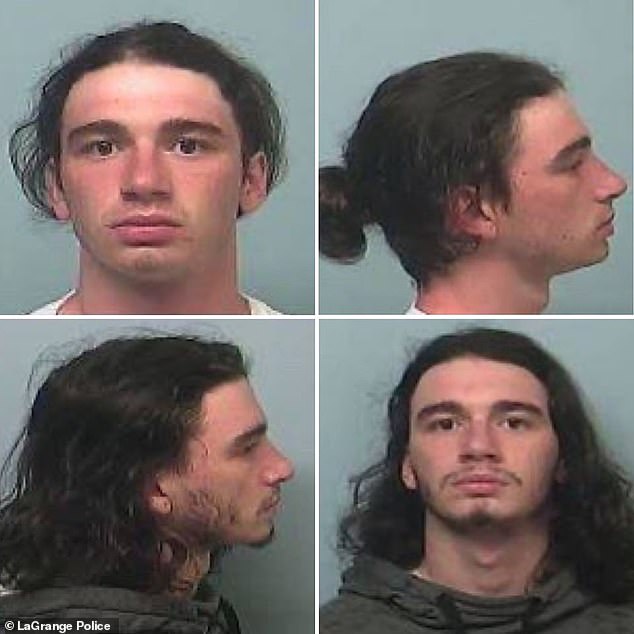 Durga has been arrested by LaGrange police previously. Two old mugshots are seen above

However, Durga’s viral TikTok video prompted numerous calls to the police from people who had inside information.

Ironically, the tip-offs subsequently led officers to track him down in the town of Hamilton, where they arrested and charged him.

‘Without Mr. Durga’s viral TikTok video, we would not have received the amount of tips and information that ultimately led to his arrest, thank you!’ the police department gloated in a new Facebook post follow his apprehension.

Durga’s role in the drug investigation is unclear.

At the beginning of the month, police arrested seven suspects who were involved in a Georgia Bureau of Investigation operation which involved undercover officers purchasing drugs from a pub in LaGrange.

The police department updated their initial post on Friday following Durga’s capture. They gloated that his viral TikTok video led to tip-offs that caused his captured