Georgian gang ‘smuggled people in UK through Ireland and Holyhead’

A gang of Georgians took advantage of lax Irish border controls to smuggle illegal migrants into the UK, a court has heard.

Gurami Shariashvili, 27, and a group of his compatriots allegedly helped their girlfriends and family members to claim asylum in the Republic of Ireland before smuggling them across the border and into mainland Britain via the ferry to North Wales.

George Kapitadze, who has pleaded guilty to conspiracy to break immigration rules, was stopped by Special Branch officers at Holyhead port as he drove four female Georgians into the country, on June 22 last year.

A jury heard how Shariashvili conspired with family members Levani, 30, Giri, 45, alongside Mikhail Mamulashvili, 35, Leri Mgaloblishvili, 45, and Ilia Diasamidze, 35, to smuggle the economic migrants using a variety of methods.

A group of Georgian nationals are on trying after they were arrested in Holyhead. Prosecutors say they used the Welsh port as a backdoor into Britain

In June 2017, a man called Giorgi Berikashvili was cought trying to board a flight from Belfast to Manchester using a fake Portuguese passport after he’d travelled to Northern Ireland from the Republic.

A couple called Amiran Sharishvili, brother of Levani, and Lili Mdzelura successfully made it into the UK using the same rouse and were discovered in living at Levani’s Eastham home in July 2018.

Prosecutor Simon Mills said: ‘The prosecution case is that this is economic migration, albeit of an illegal kind. Some of the activity related to family members or partners of the defendants.

‘The events you will be considering result from commercial transactions and involve an abuse of the common travel area between the Republic of Ireland and the United Kingdom.

‘You are going to hear about people claiming asylum in Ireland, then disappearing from that system and then travelling into the United Kingdom, sometimes by getting a ferry from Dublin to Holyhead and sometimes by flying from Belfast to Manchester carrying false identity documents,’ explained the prosecutor.

‘This happened after making the easy crossing from the Republic of Ireland to Northern Ireland.’ 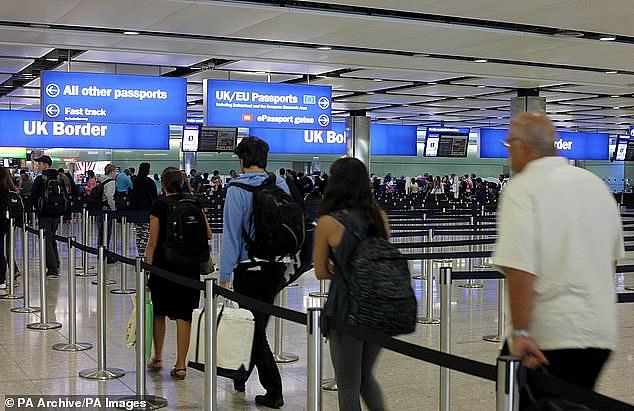 The Irish border has been a political issue during the Brexit negotiations, with both the EU and the UK keen to maintain the arrangements laid out in the Good Friday Agreement.

Gurami and Giri Shariashvili, both of Feltham, Middlesex, Mamulashvili, of Eastham, London, and Mgalobshvili, of London all deny conspiracy to facilitate breach of immigration law.

The three Shariashvili’s deny two counts of facilitating the commission of a breach of immigration law, one of which involved Ilia Diasamidze, of Lewisham, London.