Georgina Castle is a real Super Trouper in Mamma Mia!

It is just as well actress GEORGINA CASTLE went against her father’s advice not to go into acting – she won the lead role in the West End’s Mamma Mia! She tells Marianne Power why she’s cherishing her childhood dream

Andrew Castle had one piece of advice when his teenage daughter announced that she wanted to go to drama school: ‘Don’t do it.’

‘He was incredibly concerned,’ remembers Georgina, 24, who has inherited her father’s striking blue eyes. ‘He sat me down and asked if I was prepared for the insecurity, disappointment and long periods of unemployment. I told him that I was sure. I don’t believe people should have regrets – you have to make a bold choice and throw everything at it, which is exactly what Dad did with tennis.’

But Andrew Castle’s road to becoming one of the UK’s best known tennis players was not without its challenges. Now 53, the broadcaster and sports commentator is a former UK number one who reached the Australian Open mixed doubles final with Anne Hobbs in 1987.

‘At one point, when he was training in America, he was selling his blood to pay his rent. He knew I wasn’t choosing an easy road,’ says Georgina. 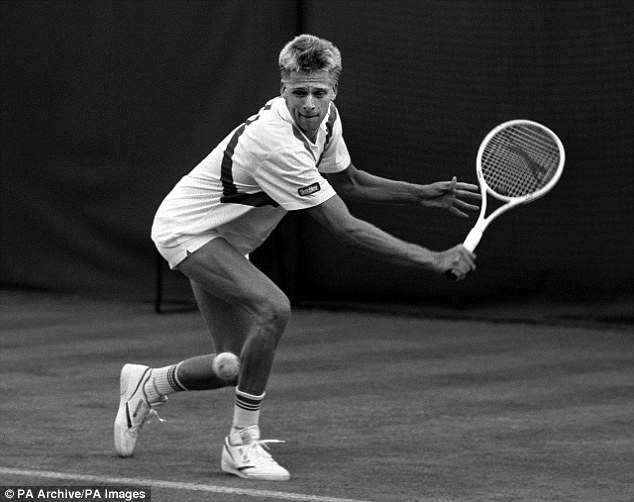 Georgina’s father Andrew at Wimbledon in 1987

In fact, her father’s warning was ‘the best bit of advice she’s never taken’, as Castle himself has admitted in interviews. Just a few years out of drama school, Georgina is on her way to becoming a darling of the West End stage, having taken over the lead role of Sophie Sheridan in Mamma Mia!. 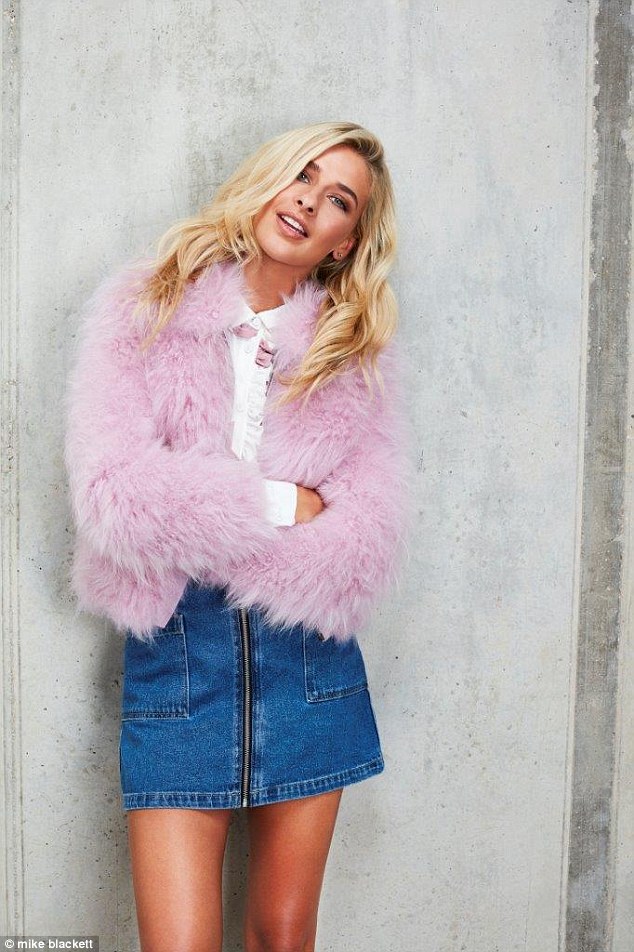 Georgina has wanted to play the role of Sophie since seeing Mamma Mia! as a child. JACKET, Charlotte Simone. SHIRT, Co-Te. SKIRT, Topshop

She auditioned ten times before landing the part as understudy and, last June, found herself being offered the main role. ‘My agent called me, and the phone signal is so bad in our house I almost had to hang out of the window to hear her. I was so excited I screamed,’ says Georgina.

‘It’s going amazingly well. Every night there’s a standing ovation and the crowd sings along – people seem to think it’s karaoke! We get a lot of crazy hen-dos. It can be awkward trying to sing “Knowing Me, Knowing You”, which is meant to be a serious song, when the crowd is shouting and waving their arms in the air. But I’m enjoying every second of it.’ 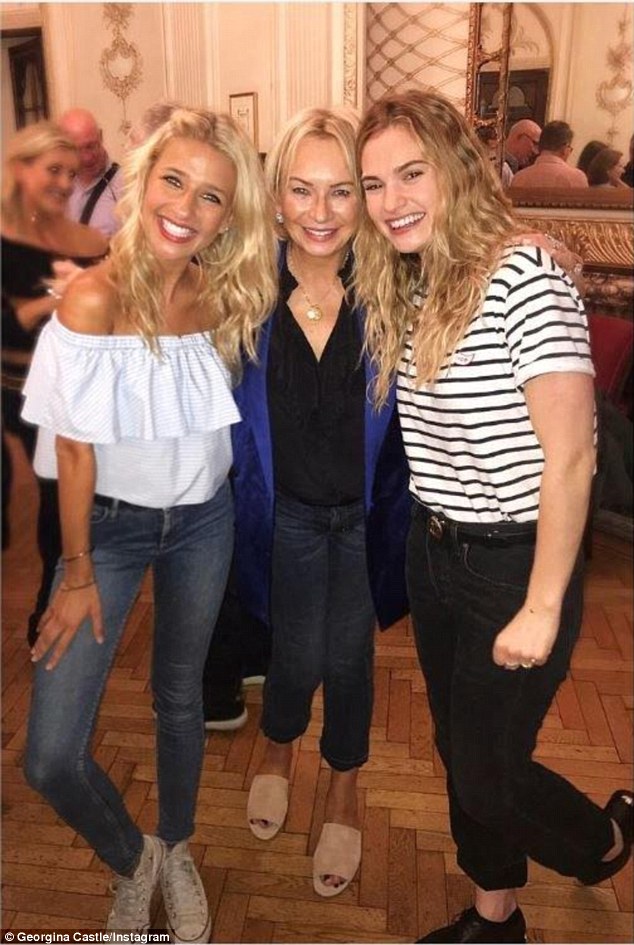 After Cinderella star Lily James – who plays the young Meryl Streep character in the forthcoming Mamma Mia! prequel movie – saw the show, she asked Georgina how she can ‘sing that loud every night’.

It helps that Georgina adores her fellow cast members who feel like family. She has regular lunches with Sara Poyzer, who plays her mother Donna, and is friendly with the actors (Alasdair Harvey, Dugald Bruce-Lockhart and Richard Trinder) who play her potential fathers.

‘My three fathers share a dressing room and I pop in for jaffa cakes and a chill out. They’re always there for advice or to make me laugh – I feel very close to them. When Dad watches in the audience he says he wants to shout, “I’m her real dad!”’ 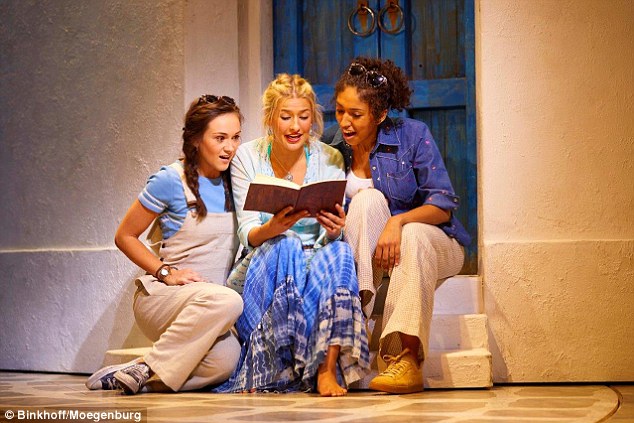 Her father, mother Sophia, 50, and sister Claudia, 23, are often in the audience, and her Swedish-born maternal grandparents have been to support her, too.

‘I looked into the crowd one night and there was my 84-year-old grandfather dancing in the aisles. He was throwing shapes I’d never seen before. It was a big moment for them – they are huge Abba fans and we used to sing “Thank You For The Music” together as a family.

‘When I was auditioning for Mamma Mia!, my grandfather was sure I’d get the part: “You are Swedish,” he said. “It has to work, you have Abba in your blood.”’

And there is a sense that this was meant to be – because it was while watching the musical as an 11-year-old that Georgina decided she wanted to act.

‘I’d invited friends along to see the show for my birthday and I remember the actress who was playing Sophie singing “The Name of the Game” in a green top, and I knew then that I wanted to be her – that girl with the sparkly green top.’ Her parents, however, say it started much earlier. 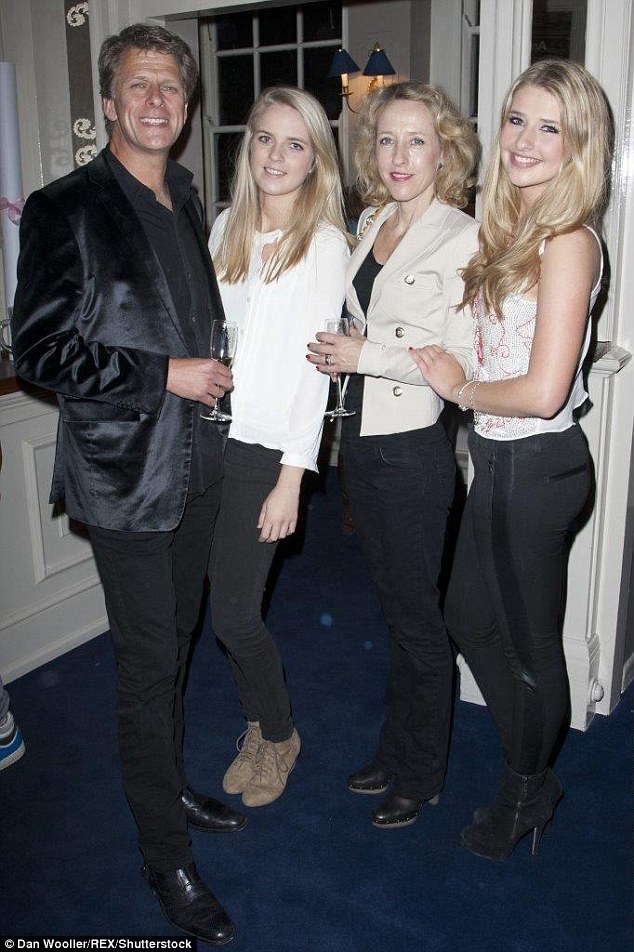 Georgina with her father, sister Claudia and mother Sophia

‘Mum remembers us going to Wimbledon Theatre when I was four. We were early, and I climbed up to the upper circle and ran around the balcony looking down at the stage, and said to Mum, “I’m going to be there one day!”’ Georgina joined the local drama club near the family home in Clapham, Southwest London, and took singing lessons. At 15 she was approached to join a girl group in America but her parents said no. ‘They were so firm, it wasn’t even up for debate,’ she says.

Instead she got a job singing for Disney, travelling to North London every weekend to record songs for a children’s computer game. Around the same time, she sang for David and Samantha Cameron at a charity event for Great Ormond Street Hospital.

Super-agent Jonathan Shalit – who discovered Charlotte Church – was in the audience and when he heard her he declared that Georgina, too, had the voice of an angel. But her parents were determined she focus on schooling. ‘Dad said, “You can throw away your education afterwards,”’ she says.

The approach worked. Georgina got straight-A GCSEs – despite ending up in hospital just days before her exams started. ‘Swine flu had hit my school, and I was asthmatic and had a chest infection, so they gave me a double dose of the Tamiflu drug which caused my lungs to collapse,’ she says.

‘The next thing I remember is waking up in hospital and everyone wearing space suits. I was in solitary confinement for three days – even Mum wasn’t allowed in.’ It transpired that she didn’t have swine flu, and Georgina admits that ‘it gave me a fright but my main concern was my GCSEs’.

Andrew is clearly a protective father. In interviews he often mentions Georgina and Claudia (who works for the Football Association). ‘Sometimes I get embarrassed by how much he mentions us. We are really lucky because we’re a very tight-knit family.’ 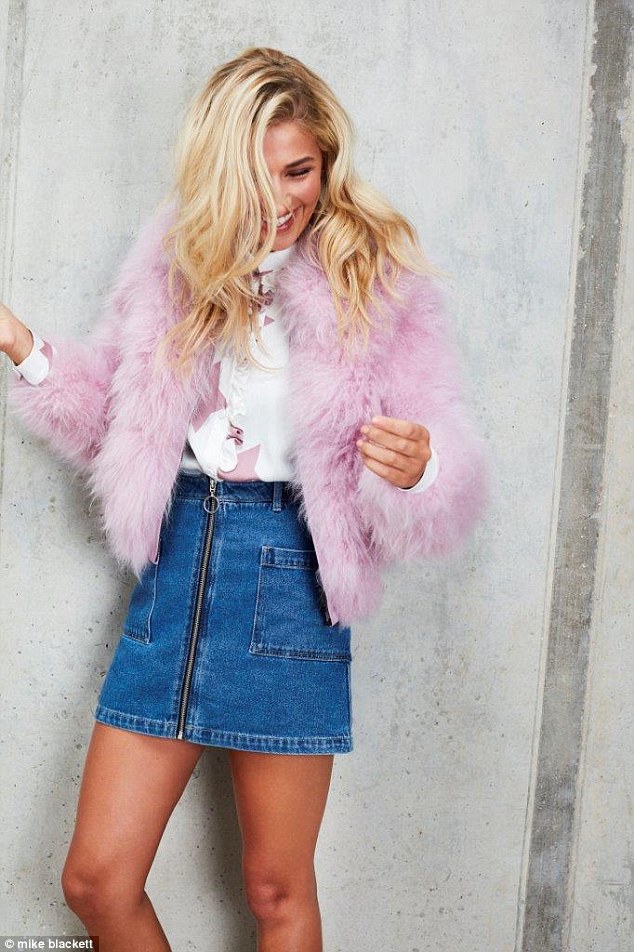 ‘Every night there’s a standing ovation and the crowd sings along – people seem to think it’s karaoke,’ says Georgina of musical Mamma Mia!

Andrew has also been determined to show his daughters self-defence, Georgina says: ‘He taught me how to punch as a way of defending yourself, and he told us that the most important word we can learn is “no.”’

Neither is Andrew afraid of standing up for himself. ‘For two years running he was the most fined tennis player on the tour,’ laughs Georgina. ‘He was fined for gross misconduct for swearing on court.’ Politically outspoken, on one occasion he walked on court and placed a placard by his chair saying ‘No to Poll Tax’.

Did he ever hope that his daughters would follow him into the sports world? ‘Not at all. My sister used to row and I used to play netball and swim, but there was never any pressure on us to play tennis. I’d get cross with Dad when he tried to teach me as a kid; we play a lot more now that I’m older and don’t lose my temper with him.’

But while Georgina has chosen to tread the boards rather than pound the courts, it’s clear that she has her father’s work ethic. ‘The thing that has been drilled into us by Mum and Dad is to work hard at your craft, to practise and be the best that you can. Not for anyone else but for yourself.’

First memory My sister falling into a pond and my dad yanking her out by her dungarees.

What makes you laugh? I have an evil streak that can’t resist it when people fall over – as long as I know they will be OK.

Perfect weekend Escaping to a little cabin in the forest and having adventures, climbing trees and jumping over rocks.

Life-changing book My friend has given me Eat, Pray, Love by Elizabeth Gilbert. I have a feeling it will make a big impact on me.

Karaoke song ‘You’re The One That I Want’ from Grease.

What keeps you awake at night? Overthinking the future.

Guilty pleasure Show tunes. I’d like to be taken seriously as an actress, but I do love jazz hands and a good knees-up song.

In your make-up bag Everything! You never know when you’re going to need a purple lipstick.

Green juice or a cocktail? Cocktail.

It is this focus that helped Georgina achieve As in her A-levels and survive the rigours of three years at the Royal Central School of Speech & Drama in London. ‘It’s very intense,’ she says. ‘They tear you apart before they build you up again. The teachers were terrifying but their methods work.’

Mamma Mia! is Georgina’s second musical in the three years since her graduation (she played Lisa, the sister of heroine Baby, in the touring production of Dirty Dancing).

‘It’s a responsibility I take very seriously. I do eight shows a week over six days. People have bought their tickets; they might have saved up or it could be a special date. You have to give it your all. There are days when it’s exhausting, but as soon as the lights come up you find energy you had no idea you had.’

Does she feel pressure to look a certain way? ‘It can be very competitive,’ she admits. ‘Once I went to a casting and met a girl I knew who said, “Thank God you’re here, I’m usually the fat one at these things!”

At another audition a casting director laughed at me and said, “Darling, you’re never going to work with a nose like that.” So far I’m lucky that it hasn’t bothered me, I see it as a funny anecdote.’

So it didn’t make her want to alter her appearance? ‘Absolutely not. The whole point is to embrace what makes you you. I have the Castle nose!’

It seems that being a Castle keeps her grounded. She still lives in the family home in Clapham along with her sister. ‘I left briefly to move in with a boyfriend but we broke up recently.

We’d been together for five and a half years. It’s incredibly sad but sometimes it’s important to be by yourself,’ she says.

So what’s next? ‘I’d love to do something more hard-hitting. I watched the BBC One drama Three Girls about the Rochdale abuse case, which was amazing. It would be great to do something dark and gritty but, ultimately, I’ll take anything people give me.’ For now, though, she’s enjoying the ride and remembering her dad’s advice:

‘He reminds us to “meet with triumph and disaster and treat those two imposters just the same”. That’s the [Rudyard Kipling quotation] players see just before they walk on to Centre Court at Wimbledon,’ says Georgina. With that attitude and drive, you suspect her career is going to be a game, set and match.