A rising cricket star has appeared in court after he allegedly dragged his girlfriend under his car and ran her over late on Sunday night.

The woman, 18, suffered a broken jaw, broken ribs and fractures to her legs and shoulder after she was allegedly struck by Brady Dermott Collins.

Her jaw has been wired shut to allow it to heal and she may not be able to walk for six months.

Collins, 25, appeared in Geraldton Magistrates Court on Monday afternoon over the alleged hit-and-run.

Police prosecutor Ross Gray told the court the couple had argued at the local Freemasons Hotel on Sunday night when she left the pub, the West Australian reported.

Collins, who works in landscaping and plays cricket for Geraldton, is accused of driving to an address in Utakarra, 4km from Geraldton, at 11.05pm and beeping his horn to alert the alleged victim that he was outside.

She walked to Collins’ Holden ute and had a short conversation with him.

The teenager was holding onto the top of the driver’s side glass window when Collins allegedly drove off, causing her to fall.

The court heard she was dragged under the ute before Collins allegedly ran over her and sped away.

The alleged victim was flown to Royal Perth Hospital, 420km away, by the Royal Flying Doctor Service in the early hours of Monday.

She is reported to be in a serious but stable condition.

Police officers found the ute at about 5.50am on Monday at an address in Spalding, a northeastern suburb of Geraldton.

Collins was later arrested and made admissions to the offences, the court heard.

He plays for the Towns cricket club and is the joint captain for the A-grade team this year. 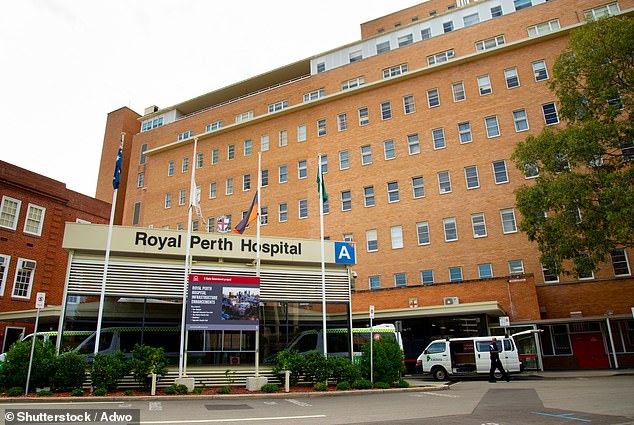 The alleged victim was flown to Royal Perth Hospital (pictured), 420km away, by the Royal Flying Doctor Service in the early hours of Monday

The police opposed bail due to the seriousness of the charges with the prosecutor telling the court he was a flight risk.

But Collins’ lawyer Gregory Chin said he did not have a criminal record, had strong ties to the area and that his family would provide surety for him.

Bail was granted by Magistrate Angus Hockton, who said conditions could be put in place to reduce the risk of interference with witnesses.

He must report to Geraldton Police Station everyday, hand over his passport and not contact the alleged victim.

Collins is next set to appear before Geraldton Magistrates Court on January 30.