Gerard Butler and on-again girlfriend, Morgan Brown, packed on the PDA after lunch in Malibu on Friday.

The 51-year-old actor and his significant other appeared to be ever the happy couple as he kept his arm over her shoulders while the two strolled down one of the coastal city’s walkways.

The couple, who has been linked together since 2014, enjoyed an afternoon out at the Trancas Country Market on the far west side of town.

Better together: Gerard Butler was seen stepping out on a PDA-filled outing in Malibu with his girlfriend, Morgan Brown, on Friday

Butler kept it very casual during the outing as he sported a stark white T-shirt with a pair of blue jeans and brown high-top sneakers.

The 300 star also wore a weathered light beige hat as he spent time with his girlfriend.

Brown, 50, opted for an eye-catching multicolored dress that flowed gracefully in the wind, and she carried a light yellow bag over her left shoulder.

She accessorized with several pieces of jewelry, and her beautiful brunette locks fell down her backside. 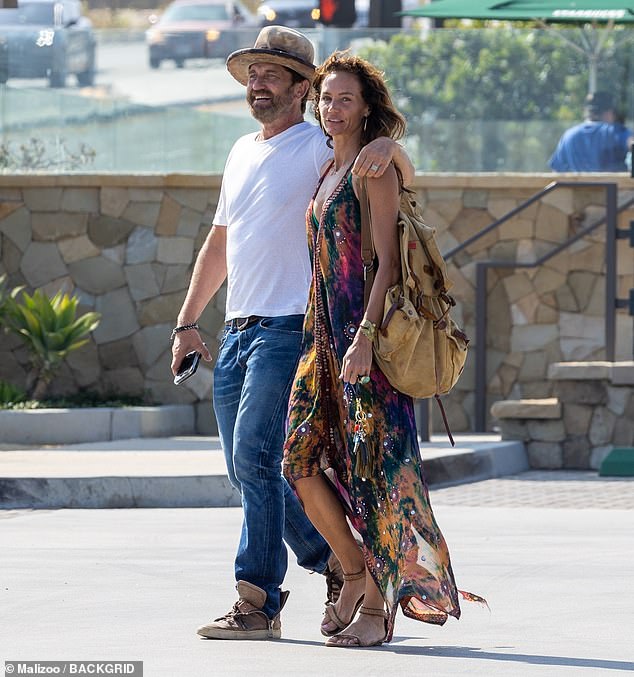 Taking it easy: The 300 actor kept it simple in a white T-shirt and a pair of blue jeans while spending time with his significant other

The couple was first spotted together in 2014, and they have maintained an unsteady relationship ever since.

Prior to becoming involved with the real estate developer, the actor was linked to figures such as Madalina Ghena and Brandi Glanville.

Although the two were rumored to have split up not long after they initially began their relationship, they were seen together on multiple occasions throughout 2015 with break up rumors swirling in 2016. 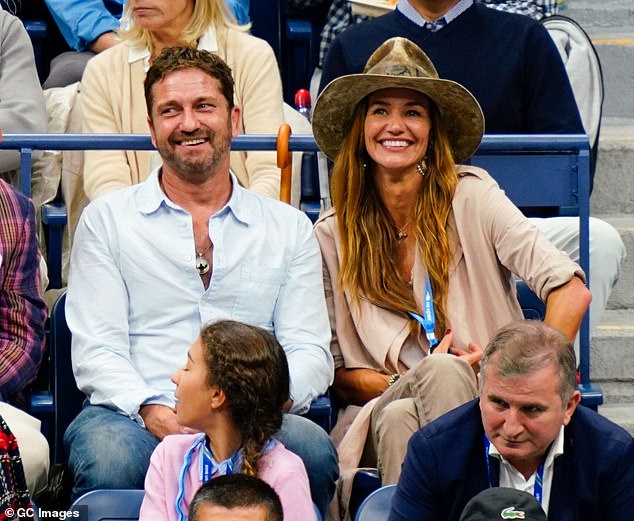 Two of a kind: Butler and Brown were first romantically linked in 2014 and they have maintained an on-again-off-again relationship ever since; they are pictured in 2018

Butler and Brown appeared to be back on in 2017 when they were spotted together during a very loved-up trip to Mexico, although they separated soon afterward.

Gerard spoke to People at that time and expressed that he had high hopes for his future personal life.

‘In five years I want to be in a relationship. I’d love to have one or two kids — it’s about time,’ he said.

He also bemoaned the fact that his hectic work schedule meant that he effectively had ‘no personal life.’ 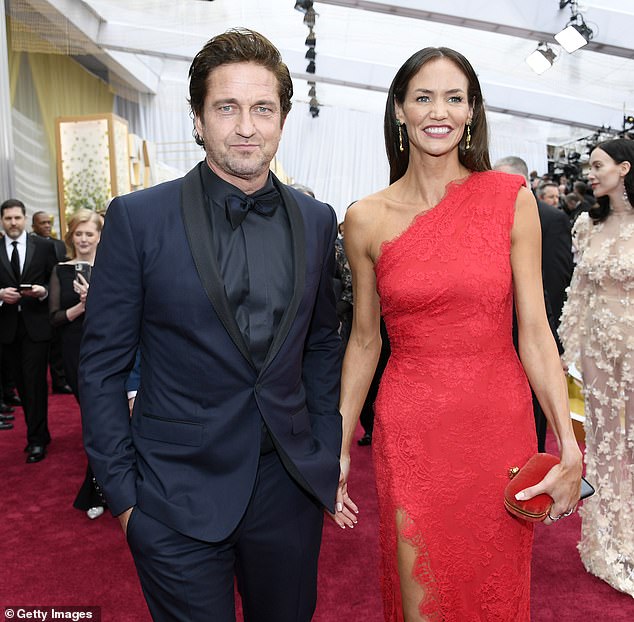 Trying it out: The couple attempted to strengthen their relationship during a 2017 trip to Mexico, although they split up soon after returning to their homes; they are seen at the 92nd Annual Academy Awards in 2020 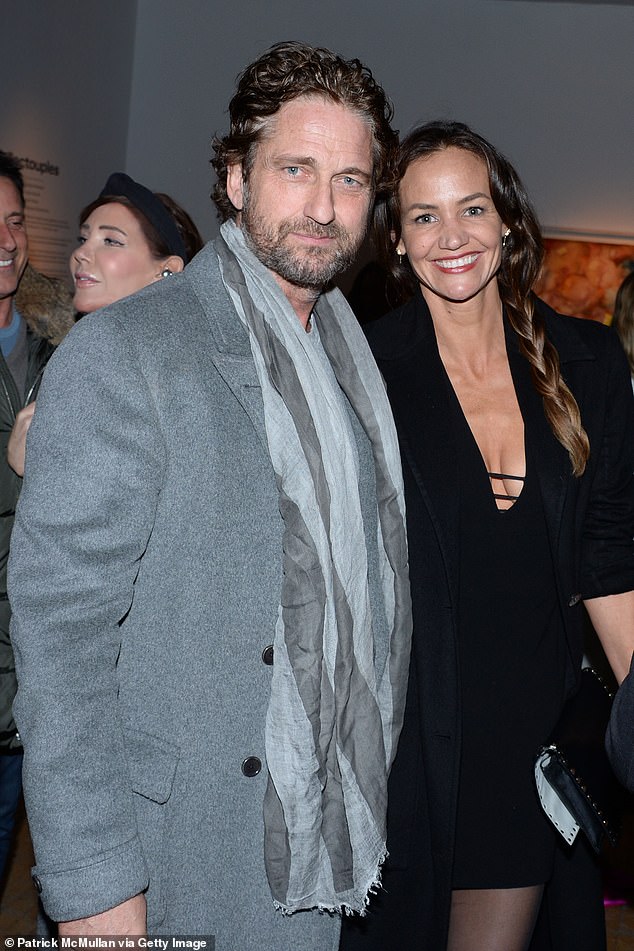 Roughing it out: During an interview with People, Butler bemoaned the fact that his dedication to his profession effectively meant that he had ‘no personal life’; he is seen with Brown in 2020

Butler and Brown were spotted back together again in 2019 and remained steady for a lengthy period of time.

The two reportedly took a break from their relationship when it was tested by the limits of quarantine during early 2020.

However, the couple was seen spending time together at a farmers’ market in Los Angeles this past June.

The pair shared a kiss during the outing, seemingly confirming that they had rekindled their romance. 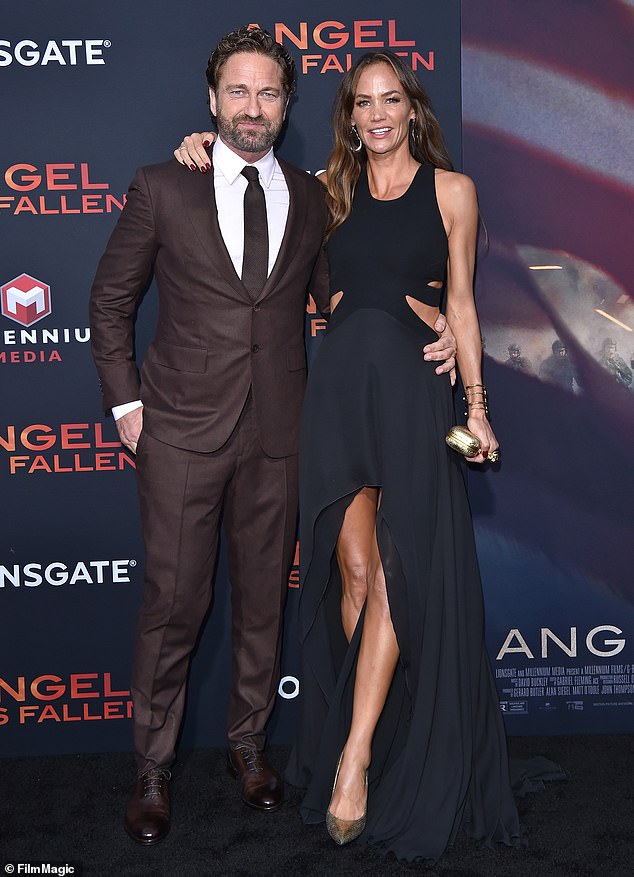 Back at it: The two were recently spotted sharing a kiss at a Los Angeles farmer’s market, seemingly confirming that their romance was back on; they are seen at the 2019 premiere of Angel Has Fallen