Germany’s cybersecurity officials are probing a worldwide Microsoft outage that left millions of people without access to their Outlook emails and Teams messaging app this morning.

The first issues were reported at just before 7am, with Microsoft saying at around 9am that they have isolated the problem to a ‘networking configuration issue’ and are trying to resolve it without causing ‘additional impact’ to users.

They later added that they have ‘rolled back’ a change to their network that they believed was having an effect.

The problem left millions of people working from the office or their homes were left without access to emails, causing chaos for many – although the issue appeared to have been partially resolved before 9am.

Twitter was filled with complaints, with one person asking: ‘Is @Outlook down for everyone or am I the only one having a stressful start to the day???’

Twitter was filled with complaints, with one person asking: ‘It @Outlook down for everyone or am I the only one having a stressful start to the day???’

Microsoft said on its status page at around 10am that it had found that a ‘wide-area networking (WAN) routing change’ caused the issues.

It added: ‘Some of the customers who had previously reported impact are also reporting recovery.’

A WAN is a large network that can facilitate communication, the sharing of information and much more between devices from around the world.

The biggest one being, of course, the internet itself.

If WAN connections didn’t exist, companies would be isolated to restricted areas or specific geographic regions.

As organisations grow and become international, WANs allow them to communicate between branches, share information and stay connected.

Employees can access information they need for their job when working at home or travelling for work, while we also rely on WANs to communicate online, bank and shop.

They earlier said on their status page and on Twitter that it was a result of an internal change to their infrastructure.

They said: ‘We’ve rolled back a network change that we believe is causing impact.

‘We’re monitoring the service as the rollback takes effect.’

It had initially said just after 7.30am that it was ‘investigating’ the outage issues.

Microsoft 365 is the firm’s name for its collection of programs and services, which also include Microsoft Office applications such as Word and Excel as well as communication platform Teams.

Teams is used by nearly 300million people across the world, with many businesses and schools relying on it for calls, meetings and general organisation.

The firm said it has received reports that its OneDrive cloud storage facility, SharePoint Online service and Microsoft Graph are also having problems.

Jake Moore, a cyber security specialist, warned that the problem highlights how businesses should be prepared and have contingency plans when critical programs suffer outages.

He told MailOnline: ‘These outages are increasing in volume due to the sheer numbers of more online users and traffic.

‘Many people are quick to suspect a cyberattack but this can often add to the confusion. It highlights the importance of these services and the millions of people they serve.

‘Businesses must test their infrastructure and have multiple failsafes in place however large the company is.

‘But as often it is with the case, it is simply impossible to simulate the size and magnitude of the issue in a safe environment without testing the actual network.’

According to downdetector.co.uk, a website that tracks outages on tech and mobile platforms, more than 4,800 users were reporting problems just before 8 am.

The first outage report for Outlook was filed just before 07:00 GMT this morning, and they quickly skyrocketed to in the thousands.

The first outage report for Outlook was filed just before 07:00 GMT this morning, and they quickly skyrocketed to in the thousands

Microsoft said on its status page and on Twitter at around 9.30am: ‘We’ve rolled back a network change that we believe is causing impact. ‘We’re monitoring the service as the rollback takes effect’ 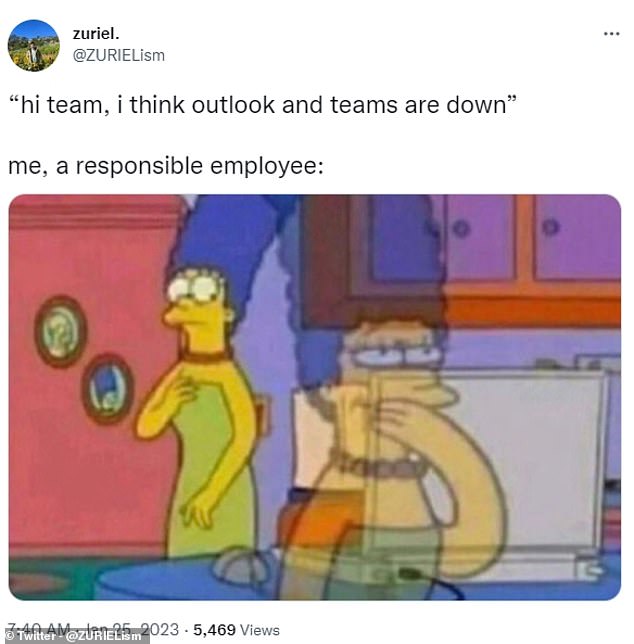 Some Twitter users are overjoyed at the surprise ‘day off’ they were given, as the lack of access to the applications left them unable to do their jobs

However, at the most recent count just before 10.30am, the reports of problems had dropped to 158.

Another user said on Twitter that the connection in their Teams meeting is so bad it was as if ‘everyone’s using dial-up’.

Others were overjoyed at the surprise ‘day off’, as the lack of access to the applications left them unable to do their jobs.

One Twitter user said: ‘So what are we doing on our day off now that Outlook and Teams aren’t working?’ 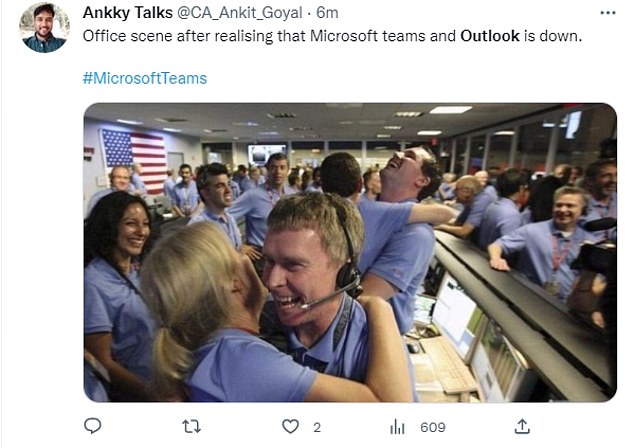 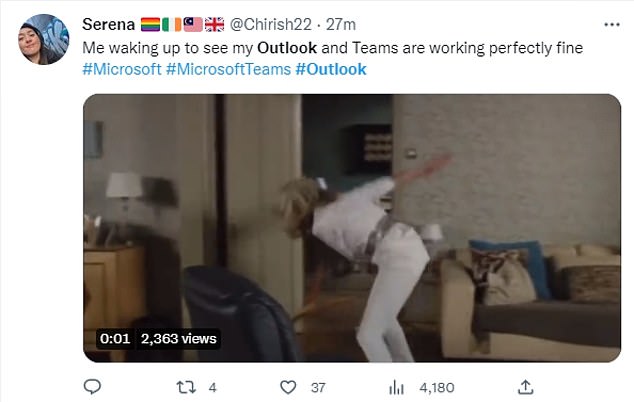 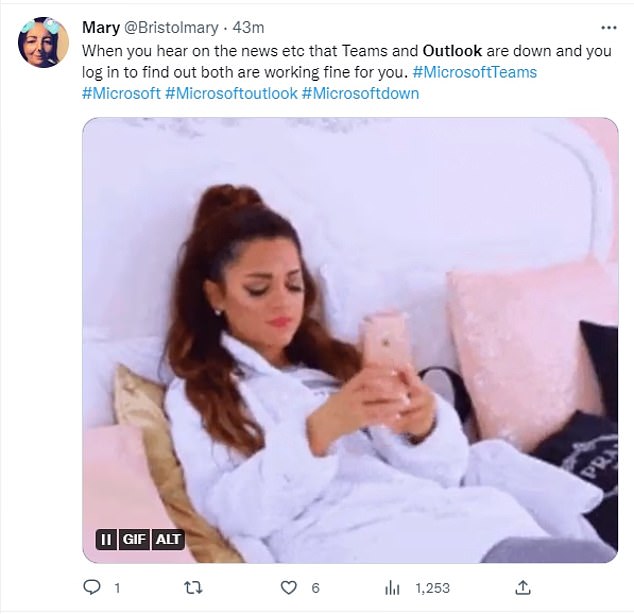 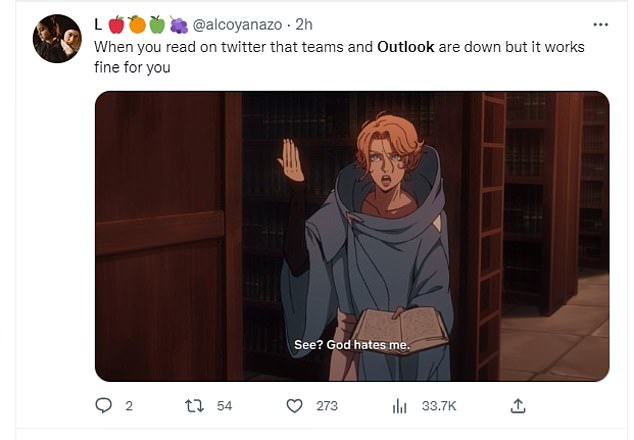 Another said they had got their ‘cooking and washing done’.

However, other users took to social media to say that they were not having problems.

Posting a meme, one joked: ‘When you read on twitter that teams and Outlook are down but it works fine for you.’

The opticians Specsavers tweeted: ‘Thoughts with everyone who logged on to see their Teams and Outlook working perfectly fine this morning’.

Reports of issues with the Microsoft suite of tools initially came in from India early this morning.

Further updates are expected from the tech giant shortly.

Last June, Outlook was hit with problems that made it inaccessible to some users.

It comes after Microsoft yesterday reported at 12 per cent drop in profit in the last three months, just days after laying off 10,000 workers last week.

The company reported earnings of $16.43 billion for the quarter that ended in December, while revenue rose 2 per cent to $52.7 billion, marking Microsoft’s slowest sales growth in six years. 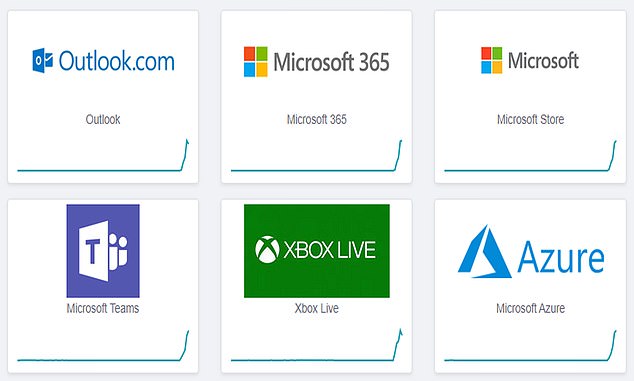 According to downdetector.co.uk, a website that tracks outages on tech platforms and mobile networks, more than 4,885 users reported problems with Microsoft programs