Germany’s far-right has sparked outrage in its parliament debut after one of its new MPs compared the party’s treatment to a victim of notorious Nazi Hermann Goering.

The Alternative for Germany (AfD) promised a ‘new era’ for Germany as its 92 members joined hundreds of other MPs in the Bundestag for the first time today.

But the party immediately sparked an outcry with a reference to one of Nazi Germany’s most reviled characters.

Sitting in the far-right side of the Bundestag, Germany ‘s 92 far-right MPs make their debut in the country’s newly-elected parliament today after protests in Berlin against their anti-immigrant party 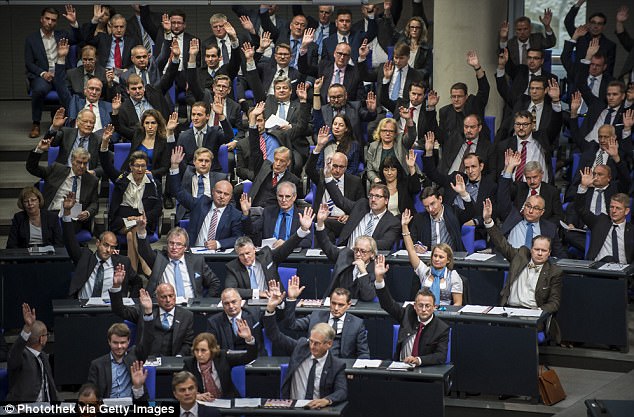 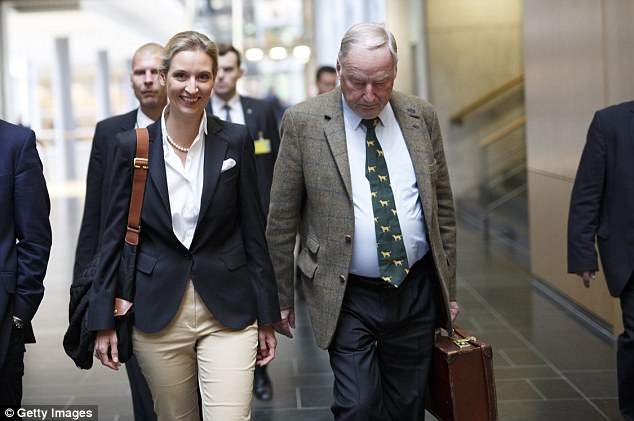 Setting the tone for more fractious parliamentary sessions in the next four years, the AfD was first off the mark in filing a motion to challenge a change in parliamentary rules that thwarted one of its MPs from making the opening speech in the lower house.

As the motion was immediately defeated by the rest of the members, the AfD’s parliamentary group chief Bernd Baumann wrongly drew a comparison to a move he claimed Goering made in 1933 to block communist MP Clara Zetkin from opening the sitting.

German news agency DPA swiftly corrected Baumann’s account, noting that Goering’s action had actually blocked a member of his own party rather than Zetkin from opening parliament that year.

Nevertheless, the AfD’s quip drew gasps from the floor and was slammed as ‘tasteless’ by Marco Buschmann of the liberal FDP party. 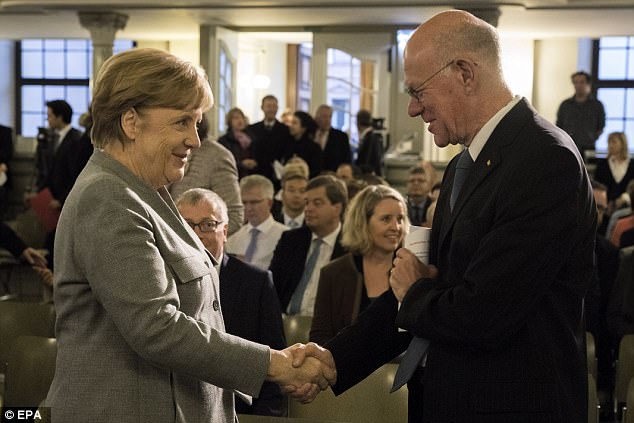 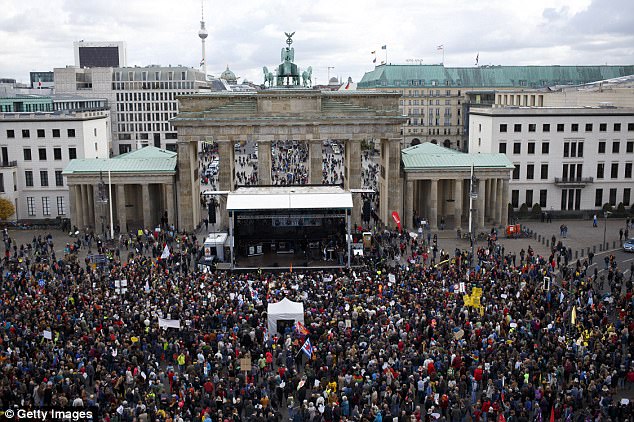 There were mass anti-racism protests in Berlin over the weekend, days before the Bundestag session

Greens lawmaker Juergen Trittin also condemned the AfD for having ‘the audacity to put themselves in the same line as the victims of Nazis’.

‘Take note: the old Bundestag has been voted out. The people have decided, a new era begins now,’ said the AfD’s Baumann.

‘From this hour on, the issues will be renegotiated – not your manoeuvres and tricks on parliamentary business but the euro, massive debt, enormous immigration numbers, open borders and brutal criminality in our streets,’ he vowed.

It comes after protests in Berlin against the nationalist movement, whose leaders have repeatedly smashed taboos through their stance on German identity and views on the country’s culture of atonement over the Second World War and Holocaust.

Josef Schuster, the president of the Central Council of Jews in Germany, said the AfD’s presence in parliament gave him a ‘queasy feeling’.

‘It’s a depressing and unsettling feeling to know that there are now people sitting in the Bundestag who appear to want to hide the Nazi past and to target Muslims and asylum seekers,’ he told the Juedische Allgemeine, a Jewish publication.

Two days ahead of the session, thousands of people holding up ‘Stop AfD’ signs demonstrated outside the parliament building in Berlin.

Today’s session was more about housekeeping rather than policy-making and former German Finance Minister Wolfgang Schaeuble was elected president of the lower house of parliament.

Schaeuble, a member of Chancellor Angela Merkel’s conservatives, agreed last month to step aside as finance minister, clearing the way for another party to take the job as part of tricky negotiations to forge a new coalition government.

Schaeuble, 75, is known for his hardline insistence on a balanced budget and his leadership during the euro zone crisis.

As polls in the run-up to the September 24 vote predicted that the AfD would win seats, Germany’s mainstream parties tweaked parliamentary rules to block the AfD from getting the symbolic post of interim speaker. 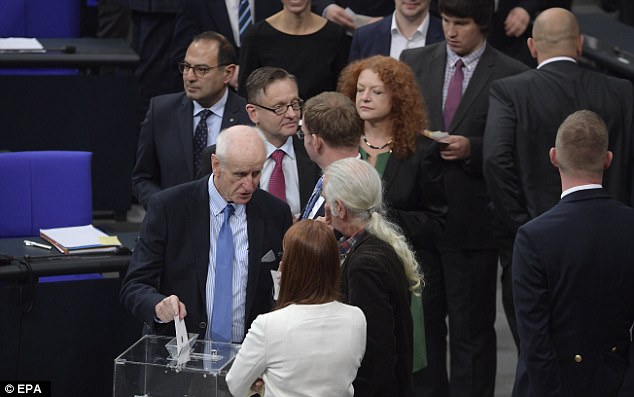 The Alternative for Germany (AfD) party has put forward Albrecht Glaser, 75, for the role of the party’s vice-president. He is pictured in a blue tie casting a vote this morning 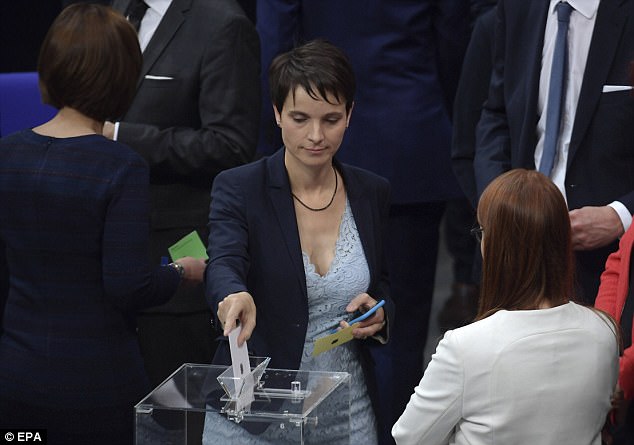 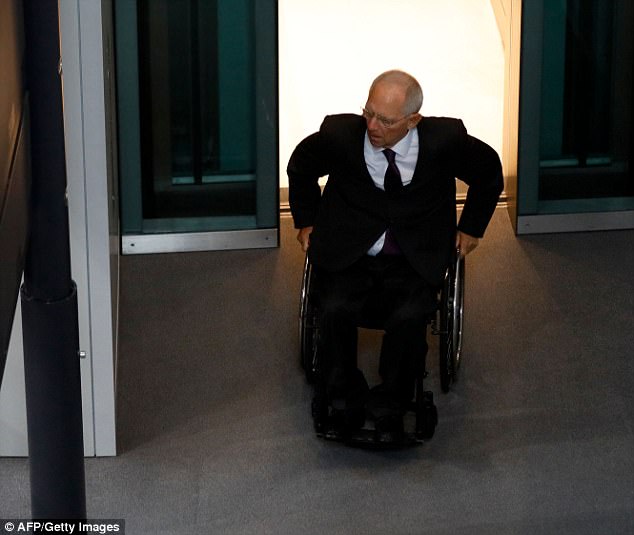 Chancellor Angela Merkel reportedly asked Schaeuble to take the post to rein in the AfD in parliament.

But while the AfD has been thwarted from securing the symbolic interim post, another battle is brewing on Tuesday as MPs elect vice-chairs at the Bundestag.

Each party reserves the right to nominate a vice-chair of the lower house, but he or she has to be elected by parliament.

The far-right party plans to put forward Albrecht Glaser, who has claimed that the fundamental right to freedom of religion should be withdrawn for Islam.

Although mainstream parties have said they would oppose the nominee, AfD party co-chief Alexander Gauland told Bild am Sonntag: ‘If he fails during the first election, we will nominate him again. Mr Glaser represents positions on Islam that all of us in AfD represent.’

The dispute risks turning Tuesday’s session into a farce as there is no limit to the number of times that a party can put a nominee up for a vote.

During the planning of the parliamentary sitting, mainstream parties were also left squabbling over who should sit next to the far-right entrants. 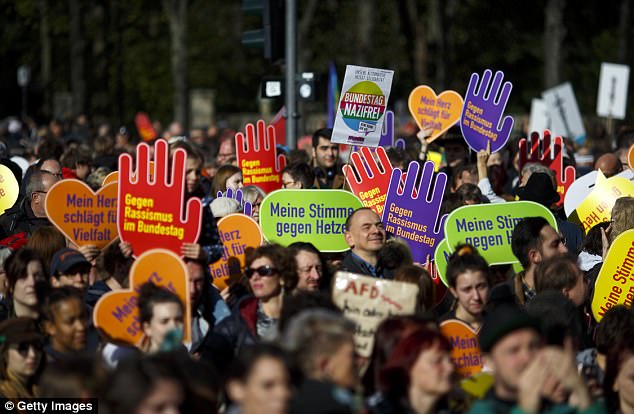 Two days ahead of the session, thousands of people holding up ‘Stop AfD’ signs demonstrated outside the parliament building in Berlin 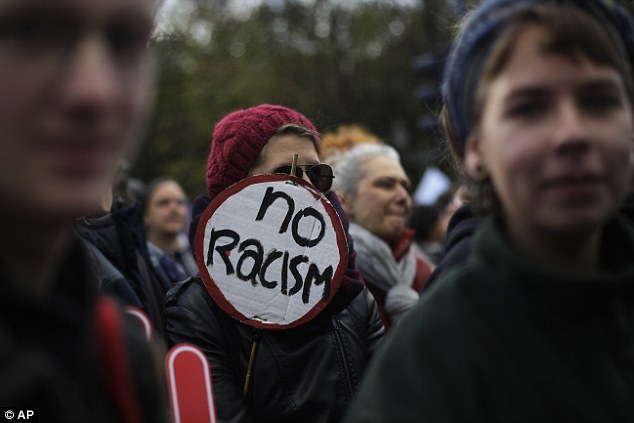 Although Tuesday will be a housekeeping session rather than a policy-making one, it is already shaping up to be contentious as the Islamophobic and anti-immigration AfD seeks to makes its presence felt 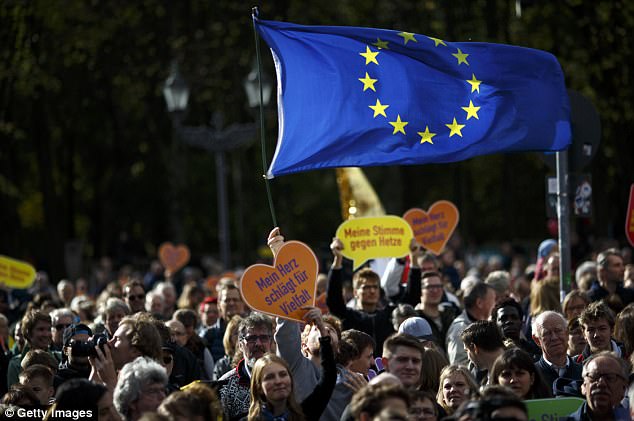 It comes after protests in Berlin against the nationalist movement, whose leaders have repeatedly smashed taboos through their stance on German identity and views on the country’s culture of atonement over the Second World War and Holocaust

The AfD had won over voters angry with Merkel over the arrival of more than a million asylum seekers since 2015.

Although Merkel’s conservative alliance won the September elections by a comfortable margin, its score was its worst in decades.

After her coalition partner the Social Democratic Party went into opposition following a humiliating loss, Merkel is now scrambling to form a coalition with parties that have opposing views on a string of issues.

Coalition talks with the left-leaning Greens and the liberal Free Democratic Party began on Tuesday, and all sides have hailed the first steps towards forming Germany’s next government.

But many hurdles remain with a long list of flashpoints that range from migration to environmental protection.

The potential alliance, which would be a first for Germany at the national level, has been dubbed ‘Jamaica’ because the parties’ black, yellow and green colours match those of the Caribbean country’s flag.