What’s the odd broken bone? The deliberately DANGEROUS German playgrounds designed to teach kids how to handle risk that put our safety-first playpens to shame

New German playgrounds are built to be dangerous, forcing children to negotiate perilous obstacles while risking injury if they fall according to a professor of motor development.

Professor Rolf Schwarz of Karlsruhe University of Education, argues that ‘safe’ playgrounds prevent kids from learning how to handle risk in the early stages of their development.

‘Playgrounds are islands of free movement in a dangerous motorised environment,’ said the professor of motor development and active schooling for children, who advises councils and playground designers.

‘If we want children to be prepared for risk, we need to allow them to come into contact with risk.’

It comes as Rebecca Faulkner, an executive from New York based non-profit playgroundNYC, said soft landing areas and spongy floors give kids unrealistic expectations of what to expect.

‘What the spongy surface playgrounds don’t do is teach kids that there is a consequence to falling, and they won’t learn anything from it,’ said Faulkner.

‘The spongy surface really just teaches them that the ground is soft, which, of course, it’s not.’

This climbing tower, built in 2018 in Ludwig Lesser Park in Berlin, is an example of a growing trend of new playgrounds designed to force kids to conquer difficult obstacles while managing risk 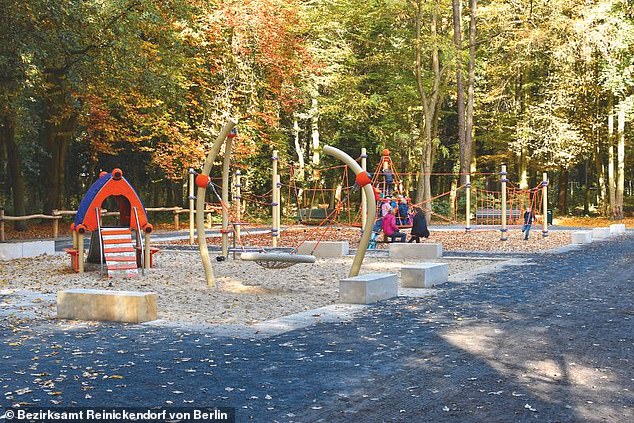 The Ludwig Lesser Park still has some play areas that are less dangerous intended for small children, but more play parks in Germany are being built with danger in mind

The news comes after a group of accident insurance companies last year called on German town planners, councils and playground to develop structures that help children to cultivate ‘risk competence’, as many of Germany’s kids were spending so much time inside amid the pandemic.

But David Köhler, whose company has built playgrounds and rope-based spiderweb structures since the 1970s, told the Guardian he has pushed for more challenging structures to be built for years.

‘Children may feel insecure when they first climb in our nets, but this is actually what makes the structures even safer,’ he said.

‘When you are feeling insecure, you are also extra careful. Our designs have significantly increased in height in recent years.’ 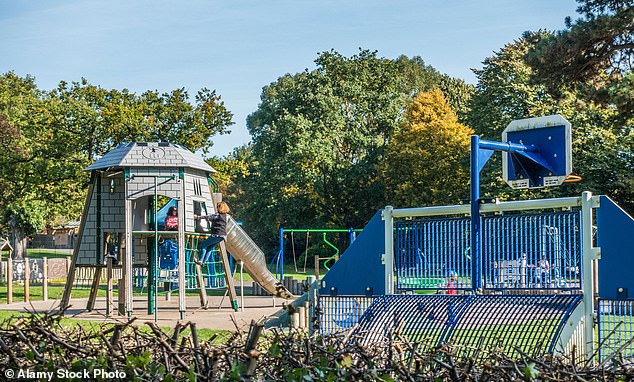 Insurance companies in the UK have taken a different approach by refusing to insure playgrounds deemed too ‘high-risk’ to avoid the cost of paying out on accidents, while researchers have said British kids are generally not allowed to play independently until age 11 (pictured: Gunnersbury Park, London)

Insurance companies in the UK have taken a different approach by refusing to insure playgrounds deemed too ‘high-risk’ to avoid the cost of paying out on accidents.

Insurer Zurich Municipal in 2019 withdrew its cover from several of Britain’s adventure play parks, blaming the move on an increase in the number and cost of claims arising from play-related accidents.

It led to fears that councils and local authorities responsible for paying the insurance premiums on playgrounds would simply water down the challenges posed by the structures in an effort to keep insurance costs low.

Meanwhile, the British Children’s Play Survey revealed earlier this year that British society is becoming more protective of children, at a detriment to their ability to manage risk and their overall mental and physical health.

According to the research, primary-age children in Britain are generally not permitted to play outside unsupervised until age 11, while their parents’ generation was able to do so at age nine.

‘We are seeing children getting towards the end of their primary school years without having had enough opportunities to develop their ability to assess and manage risk independently.’ 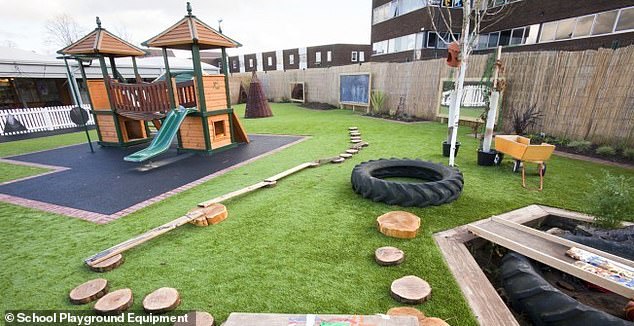 The British Children’s Play Survey revealed earlier this year that British society is becoming more protective of children, at a detriment to their ability to manage risk and their overall mental and physical health (pictured: safe play equipment in Wiltshire, UK)