A German traveller has listed the things she finds ‘weird’ about Australia – including people walking around barefoot, ‘superficial’ sales assistants, fake tan and ‘disgusting’ Vegemite.

Taking to her YouTube channel, the 20-year-old tourist compiled her lengthy list of unusual habits she has noticed across two separate videos.

‘I will talk about the things that Australian people do that I find weird as a European living in Australia,’ she said.

‘I hope this is not going to be offensive or anything this is just things that [they] do different and I don’t mind people doing them, I’m just not used to it.’

Jenny said one of the most bizarre things she’s noticed is people walking out in public without any shoes on.

‘The thing I found very interesting is people just casually walk barefoot around, which I think is really common in the beachy areas like Byron Bay, the Gold Coast and the Sunshine Coast,’ she said.

‘At the beach people, don’t really care about wearing shoes. I also saw someone in the city the other day getting groceries without shoes. You don’t see it as much in the city but it does happen and then I saw this man walking his dog barefoot.

‘I don’t mind it, like you do you if you want to go out without shoes, that’s fine but I just couldn’t walk around without shoes. I wouldn’t feel complete.’

She said she’s never seen anyone walk barefoot around Germany, but if they did, everyone would immediately assume “something’s going on”.’

Despite finding shop assistants ‘nice’ for greeting their customers, Jenny said she thought their politeness came off as ‘superficial’.

‘People are really nice wherever you go so if you go to a shop, they will say “hi darling, how are you today? Can I help you with something?”‘ she said.

‘They are just so nice but I think it might be really superficial. They’re just nice wherever you go, you don’t have to be afraid of people being rude to you.’

Jenny said she finds it bizarre Australians only drink tap water ‘without gas’. In Germany, people prefer to drink mineral water with carbonation instead of tap water.

‘I don’t like water with gas because it makes my tummy hurt,’ she said, saying she’s happy about drinking Australian water.

‘If people are used to water with gas, they always find it really hard coming here.’ 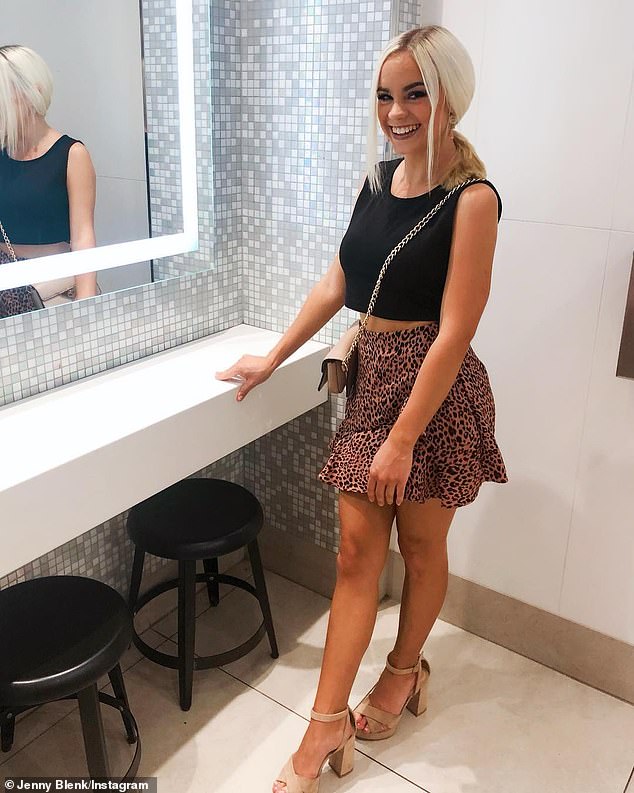 She said she’s also noticed an increasing number of women who use fake tan, in which she thinks it’s ‘super weird’ because Australia is basking in sunshine.

‘I noticed a lot of people use a fake tan. I first thought it was super weird because hello it’s Australia, there’s just so much sun and you just go outside for five minutes and get a tan,’ Jenny said.

‘Then I thought about it, tanning might not be really healthy here because the sun so dangerous you can get cancer.

‘I don’t think it’s common in Germany like some people do it but here everyone does. Look I’m from a really small town with 800 people so I have no idea about the biggest cities but where I live I don’t know anyone that fake tans.’

After several attempts at eating Vegemite on toast, Jenny said she still struggles with the taste of the spread.

‘It just doesn’t go into my head how people eat it. I’ve try it so many times as a spread and I don’t even know how that would taste good,’ she said.

‘I see people eating it and I’m like “oh man I really want to try it again” and every time I try it, it’s just disgusting and I just don’t like it.

‘Do people like it or do they just pretend? I’m really confused.’ 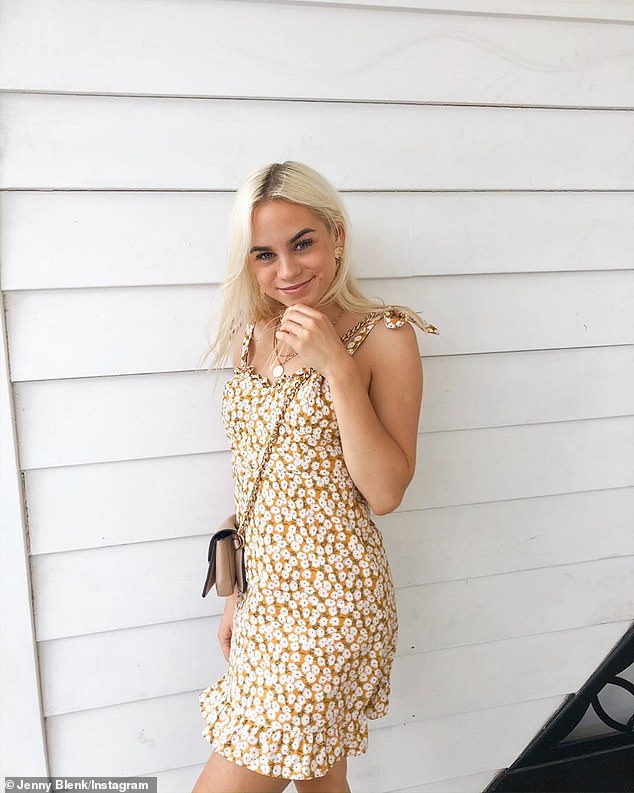 After several attempts at eating Vegemite on toast, Jenny said she still struggles with the taste of the spread, describing it as ‘disgusting’

People don’t take their shoes off inside the house

Another culture shocked she picked up is Australian people ‘don’t take their shoes off every time they go into a house’.

‘Where I live now, we do take our shoes off which I love, it’s so comforting because wherever I go, people are like “no, you can leave your shoes on” and I’m like “are you sure?” They really don’t care,’ she said.

‘The difference is that in Germany it gets really cold in winter and snowy so you don’t want to bring your dirty shoes into the house, you just don’t do it.’

Jenny said she didn’t mind the air conditioner running in her home but she found public trains, buses, shopping centres and cinemas at ‘freezing’ temperatures.

‘The air conditioner would just be so cold that you could actually sit there with long pants and a hoodie and it’s like 38 degrees outside,’ she said.

‘I totally get that you want to have the air conditioner on and I appreciate that because it gets really hot in summer but I don’t understand why you have to turn it down to 18 degrees.’ 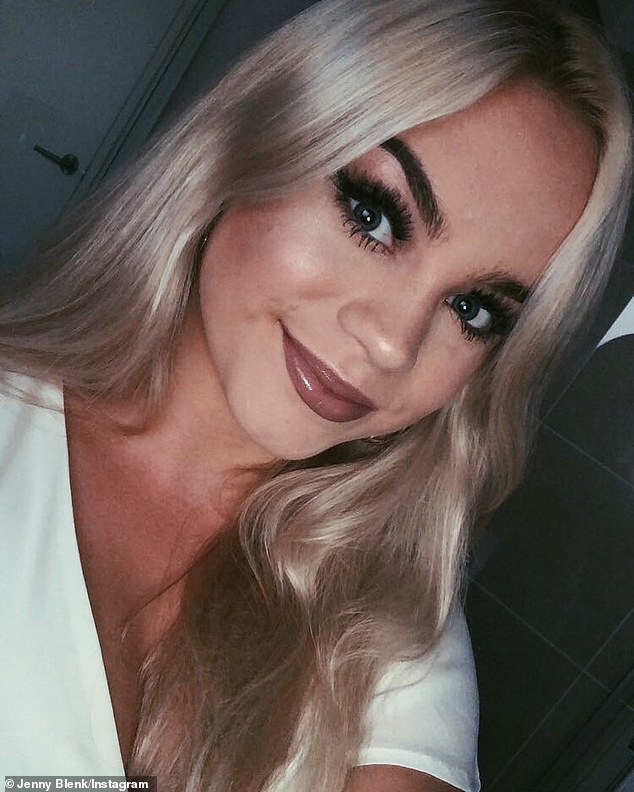 She said she’s also noticed an increasing number of women who use fake tan, in which she thinks it’s ‘super weird’ because Australia is basking in sunshine

Pedestrians crossing at a red light

‘So another thing that hurts my German heart is people crossing the street on a red light, it makes me so nervous I can’t do it,’ she said.

‘I grew up in a really small town so you just follow the rules and everything’s fine but I don’t like crossing red lights, even if there’s no con sight, I just don’t do it.’

Jenny said in Germany, pedestrians would be hit with a fine if they cross the road.

‘I think in Australia it’s not that big of a deal. Some people also don’t always stop at crossings in their car, they just don’t care so you have to be really careful,’ she said.

‘It makes me really nervous to cross a red light.’

People tuck their bed sheets in

She said she finds it unusual that people Down Under sleep with two bed sheets.

‘Australians always tuck their bed sheets in, Americans and some people in Europe might even do it too but I’m not used to it,’ she said.

‘Wherever I go, the bed is just tucked under the bed and you slip in and you can’t really move the blanket because it’s tucked in. Then they have like another layer of blanket over it which is also tucked in so that makes it even more secure.

‘Every time I go to a hotel, I just pull it out before I go to sleep because I can’t sleep with the blanket tucked in, it just doesn’t work. I want to snuggle up and you if it’s tucked in you can’t really move it.’