Germany is now seeing more daily infections than Britain for the first time during the second wave of Covid-19, as Europe’s largest economy faces the prospect of tougher measures to stop the stubbornly high contagion.

While Britain has brought cases down to around 15,000 per day, Germany’s are still hovering around 18,000 despite a month-long ‘lockdown light’ in which bars and restaurants have closed but schools and shops have stayed open.

According to Johns Hopkins University figures, Germany’s per-capita rate is now slightly higher than the UK’s for the first time since August.

While Germany’s second wave reached a lower peak than many of its neighbours, cases have failed to come down sharply even as Britain, Spain and France have seen significant improvements in their figures.

The soaring death toll has also taken some of the shine off Germany’s early success, with a new record of 487 deaths added to the tally today.

According to Johns Hopkins University figures, the infection rate in Germany is now slightly higher than in Britain for the first time during the second wave

Britain’s infection rate has been worse than Germany’s for the vast majority of the pandemic, and the UK’s death rate has also been significantly higher.

But while the UK’s average has fallen by 34 per cent in the last month, Germany’s average at the start of December is still higher than on November 1.

Spain and France, which saw their second waves start to spiral out of control in August and September, have also seen much more substantial improvements.

Some regions of Germany, especially in the former East, are seeing a surge in cases after previously being spared the worst of the contagion in the spring.

As a result, while Britain lifted its national lockdown today, Germany is inching towards tougher measures lasting into early 2021.

The current ‘lockdown light’, imposed at the start of November, was extended into December last week – and could today be ordered to remain in place until January. 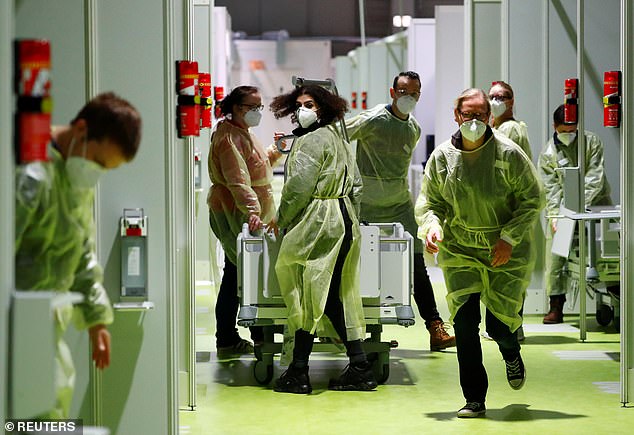 Germany’s death toll never reached more than 310 per day in the spring, but fatalities and intensive care admissions have reached new highs in the autumn.

After months of having enough capacity to take in patients from neighbouring countries, German hospitals have themselves started to feel the strain.

A record 3,918 people are currently in intensive care with Covid-19, although more than 5,000 beds are still available.

Michael Kretschmer, the premier of Saxony, said his state would impose lockdown measures strictly given the speed at which the virus was spreading.

‘There are now restrictions on leaving home in almost the entire state,’ he told ZDF television, adding that hospitals in the region were already seriously overburdened. ‘We need to act fast.’

Angela Merkel, who has generally favoured stricter lockdowns throughout the pandemic, is due to speak to state leaders by video-conference today. 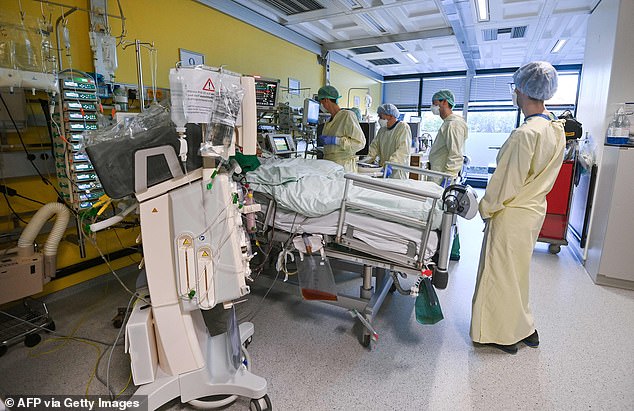 Doctors examine a coronavirus patient in the intensive care unit of the university hospital in Aachen, western Germany, last month

Most of the country is well above the rate of 50 new infections per 100,000 population per week that the government says is the fastest the virus can spread without overwhelming track and trace systems.

The Bundeswehr is helping with efforts to track infections, which have slowed in recent weeks but have yet to come tumbling down like in other countries.

Germany is also awaiting the approval of a vaccine by the end of the year, and has started setting up mass vaccination centres across the country.

Britain today became the first Western country to approve a vaccine, giving the green light to the Pfizer/BioNTech jab after trials showed it was up to 95 per cent effective.

German-based BioNTech bought a manufacturing site from a Swiss pharma group in September which it hopes will allow it to produce millions of extra doses per year.

BioNTech already has two other production sites in Germany, while at least four Pfizer sites in the US and Europe will join in the unprecedented vaccination drive.