German researchers will give a group of people £1,080 per month as part of an experiment to see whether universal basic income could work.

The study will see 120 people handed the cash with no means testing or limits on how it is spent, then monitored to see how their attitudes and behaviours change.

Another group of 1,380 people will not be given any money but will still have their attitudes and behaviours monitored, to see how they compare.

German researchers will give a group of 120 people £1,080 per month for three years as part of an experiment to see whether universal basic income could work (file image)

The experiment, which is being funded by an economic institute called My Basic Income using donations, will run for three years.

It comes as public support for basic income schemes rises across Europe amid the coronavirus pandemic.

Spain has already announced plans to introduce a scheme to kick-start its economy recovery, while a recent survey showed 55 per cent of Germans back the idea.

A similar survey in the UK back in May showed support at 51 per cent.

Jurgen Schupp, who is running the study, told Der Spiegel: ‘The debate about the basic income has so far been philosophical at best and a war of faith at worst.

‘It is – on both sides – shaped by clichés: Opponents claim that with a basic income people would stop working in order to sit on the couch with fast food and streaming services.

‘Proponents argue that people will continue to do fulfilling work, become more creative and charitable, and save democracy.

‘Incidentally, these stereotypes also flow into economic simulations as assumptions about the supposed costs and benefits of a basic income.

‘We can improve this if we replace these stereotypes with empirically proven knowledge and can therefore lead a more appropriate debate.’ 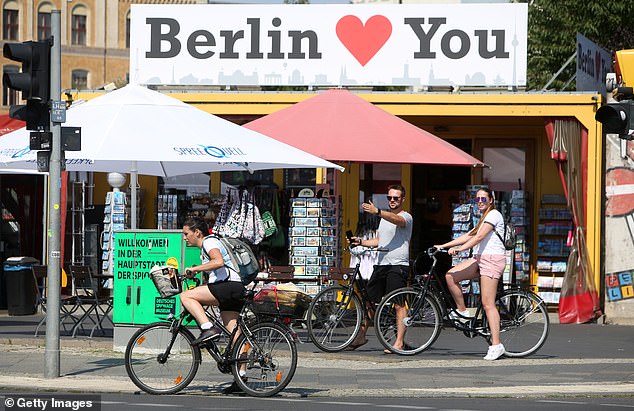 Scientists will monitor how attitudes and behaviour change among those handed the money, compared to a much larger control group who will be given nothing (file image)

Schupp hopes to recruit 1million volunteers from across the economic and political spectrum for his study by November.

From that group, 20,000 people will be chosen at random, and then whittled down to just 1,500 people who will take part in the experiment.

Schupp said the idea is to include a wide range of people including those who oppose basic income in the study, to provide the best results.

Choosing from such a large sample will allow researchers to find ‘matching’ people with similar attitudes and circumstances, then split them between the income group and the control group.

This will provide the fairest possible results, Schupp insisted.

Germany is far from the only country to trial universal basic income. Finland carried out the largest and most recent experiment, when ran between 2017 and 2018.

The study gave 2,000 unemployed people a salary of £500 per month to see if it would help them find a job, and what effects it would have on their well being.

While the mental health and general outlook of the group improved over the two years, there was little evidence that it helped people to find jobs.

Canada ran a similar experiment in 1974 in the province of Manitoba called ‘Mincome’, which provided people with a minimum guaranteed income that was enough to push them over the poverty line.

The amount they received varied depending on how much they earned through work, but they did not have to be in work to receive the payments.

The experiment ran for four years and while no final report was published, subsequent studies found it reduced hospital visits and increased the chance of children finishing school.

Other than Spain, Switzerland is the only country that has considered handing out basic income to every citizen, and held a referendum on the issue in 2016.

The scheme would have provided every adult with £1,250 per month and children with £300 per month. It was defeated, with just 23 per cent support.