Germany warns against tourist travel to parts of Spain

Germany has become the latest country to impose new travel restrictions on Spain after foreign holidays were linked to a ‘concerning’ rise in cases in Germany.

Days after Britain ordered a two-week quarantine for people returning from Spain, Germany has now advised tourists to avoid the regions of Catalonia, Aragon and Navarre – but not the southern coast or the Spanish islands.

Berlin’s top diseases expert said today that Germany’s own rise in cases is of ‘great concern’ and could be the start of a second wave.

A rise of 3,897 new cases in the last week – compared to 2,970 in the previous seven days – has sparked fears of a resurgence in Germany, which has so far been praised for its handling of the pandemic.

Unlike in mid-June, when a previous spike in cases was largely traceable to a handful of local outbreaks including at the Toennies meat factory, the latest increase is taking place across Germany and has been linked to foreign holidays, workplaces, family reunions and leisure activities.

Today’s figures showed 633 new cases in one of the highest single-day jumps in recent weeks, although the daily death toll remained very low at four.

Off limits: Germany has told its citizens not to travel to Catalonia (where people are pictured on the beach in Barcelona) and Spain’s other Covid-19 hotspots 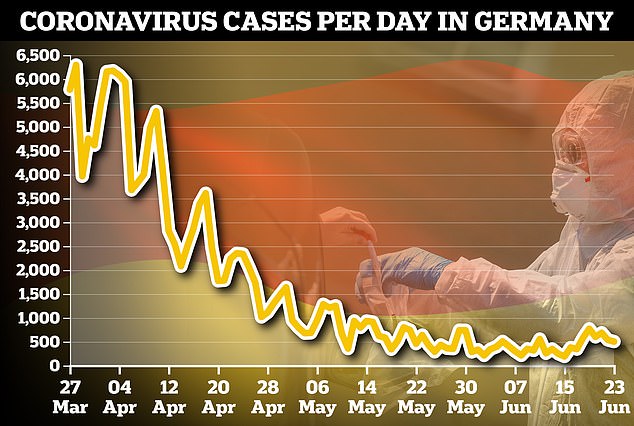 Germany has seen an increase in cases in recent days, prompting fears of a second wave in a country generally praised for its handling of the pandemic 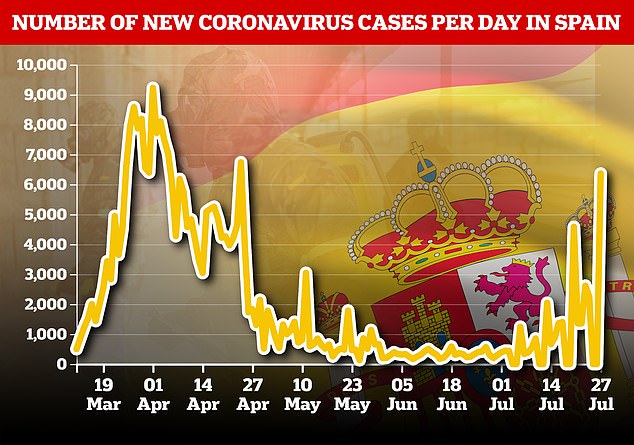 Spain yesterday announced 6,361 new cases including those recorded over the weekend, up from 4,581 in last Monday’s update and 2,045 the week before

Updated travel advice from the German foreign ministry says that non-essential travel to Aragon, Catalonia and Navarra is currently ‘discouraged due to renewed high levels of infections and local lockdowns’.

Britain has gone further by advising against non-essential travel to all parts of Spain, including to the Balearic and Canary Islands which were added yesterday.

France has also advised against travel to Catalonia, while Norway has re-imposed quarantine rules for people returning from Spain.

Spain yesterday announced 6,361 new cases including those recorded over the weekend, up from 4,581 in last Monday’s update and 2,045 the week before.

Millions of people in Catalonia have been told to stay at home while other parts of Spain have imposed their own restrictions.

In Germany, the rise has been less steep but the closely-watched R rate has been above the 1.0 threshold for much of the last two weeks, currently sitting at 1.28.

Lothar Wieler, the head of Germany’s Robert Koch diseases institute (RKI), said today that ‘we must prevent the virus from spreading rapidly and uncontrollably’.

‘The latest developments in the number of Covid-19 cases is of great concern to me and all of us at the RKI,’ he said.

‘We don’t know if this is the start of a second wave but it could be,’ Wieler said, urging people to maintain social distancing rules and wear face masks.

The RKI warned in its daily report that the virus was reappearing in places which had previously gone a week or more without a new case.

Two weeks ago, there were 125 districts with no new cases in the last week but that number has now fallen by nearly a third to 88.

The state of North Rhine-Westphalia accounted for 269 of Germany’s 633 new cases today, while Bavaria had 88 and neighbouring Baden-Wuerttemberg had 98.

‘Nationwide, there are many smaller incidents in different administrative districts, which are connected in different ways, e.g. larger celebrations in the family settings, leisure activities, jobs, but also in community and health facilities,’ the RKI said.

‘In addition, Covid-19 cases are increasingly being identified among people returning from travels outside of Germany.

‘The number of new cases reported daily had already increased in recent days. This development is very concerning and will continue to be monitored very closely by the RKI.

‘A further worsening of the situation must be avoided at all costs. This will only succeed if the entire population continues to be committed, e.g. by consistently observing rules of distance and hygiene – also in outdoor settings, airing indoor areas and, where necessary, wearing a face mask correctly.’ 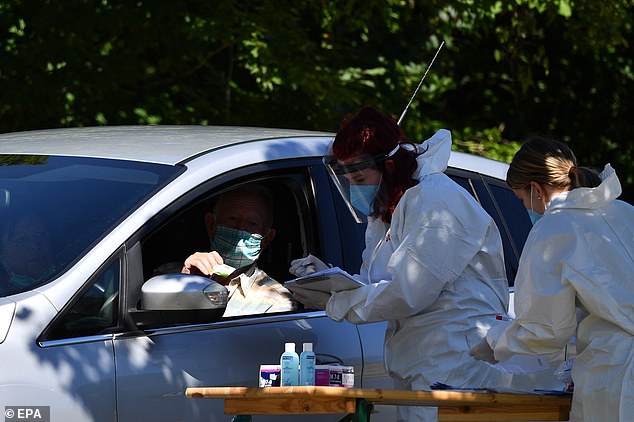 Health workers collect samples at a makeshift coronavirus testing station in Bavaria yesterday, amid a ‘concerning’ rise in Covid-19 cases in Germany 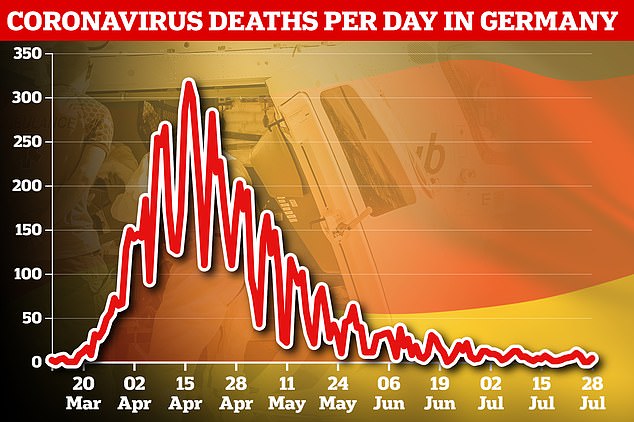 Coronavirus deaths in Germany remain low with only four recorded in the last three days, although the number in the last seven days (32) is higher than in the previous week (22)

Germany has also differed from Britain by ordering mandatory coronavirus tests at airports for people returning from high-risk areas.

Some airports had already started installing testing facilities and the checks will become mandatory from next week.

‘I will therefore order compulsory testing for travellers from risk areas,’ he announced on Monday.

After a meeting with state officials on Monday, Angela Merkel’s chief of staff Helge Braun said there was a ‘great willingness to move closer to such mandatory tests’.

‘From what we have experienced in the last few days, with over 800 cases a day in some cases, we must get back into a situation where we are well below 500,’ Braun said.

‘We are preparing everything so that if the federal government gives the go-ahead, we can implement it immediately,’ he said.

However, the move has also attracted criticism from those who believe too much reliance on tests could lead to complacency.

‘One-off tests do not offer any security,’ Ute Teichert, the head of a national doctors’ association, said in an interview with the Funke media group. ‘On the contrary: They can lead to a false sense of security.’ 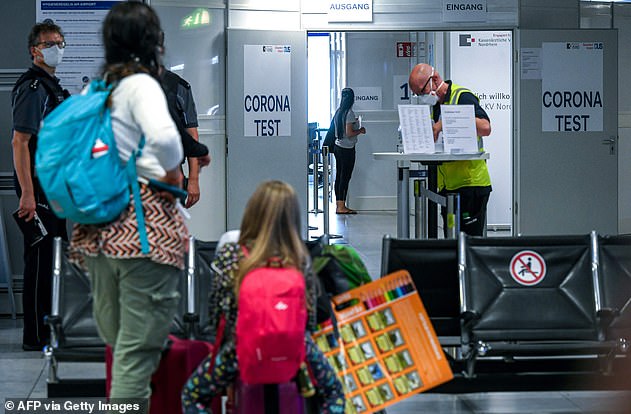 In Bavaria, Soeder said the state will set up coronavirus test sites at its two biggest railway stations as well as key points on motorways.

On top of existing test centres at Bavarian airports, tests will now be offered at the Munich and Nuremberg train stations, as well as on three major motorway routes near the Austrian border.

‘We cannot completely prevent corona, so the goal must be to detect it in time to stop it from spreading,’ Soeder said.

Soeder said Bavaria will also be testing all seasonal agricultural workers in the state, following a mass coronavirus outbreak at a large farm.

Some 500 workers have been sent into quarantine over the outbreak, as at least 174 seasonal farmhands tested positive for the virus on the farm in the municipality of Mamming, most of them from Hungary, Romania, Bulgaria and Ukraine.

Workers wearing masks could be seen on Monday milling around on the steps of the containers used to house them at the isolated rural site.

Residents in the municipality of Mamming have been offered free coronavirus tests, with various improvised test centres set up in the area.

While cases have increased noticeably, deaths remain low with fewer than 10 fatalities being recorded on most days.

Nonetheless, the figure in the last seven days (32) is slightly higher than in the previous week (22).

Four new deaths today took the total to 9,122, a far lower figure than in Britain, Spain, Italy or France.