This is the quickest and easiest Christmassy cake to make. It will keep for up to 3 days in the fridge and can be frozen for up to 1 month and iced on the day you serve.

If you haven’t got time to make the butter icing, don’t cover the cake with a tea towel when it comes out of the oven (it is more likely to crack and the cracks will look like the bark of a tree). Just allow it to cool, then flip it over onto a tea towel so the top side is underneath, fill it with cream and roll up as in the recipe.

Preheat the oven to 200°C/fan 180°C/gas 6. Cut a piece of non-stick baking parchment slightly bigger than a large Swiss roll tin. Lay this in the tin and make a 2cm cut at each corner towards the centre to help it lie flat.

In a bowl, beat the egg yolks and caster sugar until pale and mousse-like. Put the chocolate, water and coffee into a bowl set over a pan of simmering water. Stir the chocolate gently until melted, then stir into the egg yolk mixture.

Whisk the egg whites until stiff but not dry. With a metal spoon, stir a small amount into the chocolate mixture, to loosen it, then gently fold in the rest of the whites.

Spread the mixture evenly in the lined tin and bake for 12 minutes, or until the top is slightly browned and firm to touch.

Slide the cake and parchment out of the tin onto a wire rack. Cover lightly with a damp tea towel (see tip, above right) and allow to cool.

Whip the cream until it just holds its shape, then spread it gently over the cake. Trim the edges straight, reserving the trimmings.

Roll up the cake from a narrow end, like a Swiss roll, removing the paper as you go. Carefully (it is likely to break) put the roll on a serving dish, seam-side down.

Squish the trimmings into small lumps and stick one or two with a bit of butter icing onto the log. Cover the cake with Mocha Butter Icing, using a fork to mark lines down it as on a tree trunk and to make swirls round the lumps to resemble knots on a log. Add a sprig of holly and dust with icing sugar before serving.

In a bowl, beat the butter until soft. Gradually beat in the sugar and vanilla.

Put the instant coffee in a bowl and mix with a splash of boiling water. Add the chocolate and place the bowl over a pan of simmering water. Stir until melted. Allow to cool, then beat into the butter icing. 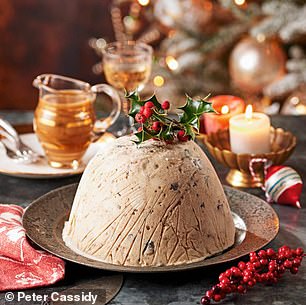 For people who don’t like Christmas pudding this is a godsend. I usually make it with leftover Christmas pudding, cake or even crumbled-up mince pies. You can make ahead and freeze for up to a month until needed.

Add the ice cream to a large bowl. Mix in the pudding, cake, mince pies or mincemeat, plus your chosen alcohol, if using. Place in the freezer until needed.

Remove and allow to sit at room temperature for 10 minutes before turning out onto a plate. Add a sprig of holly and serve immediately. 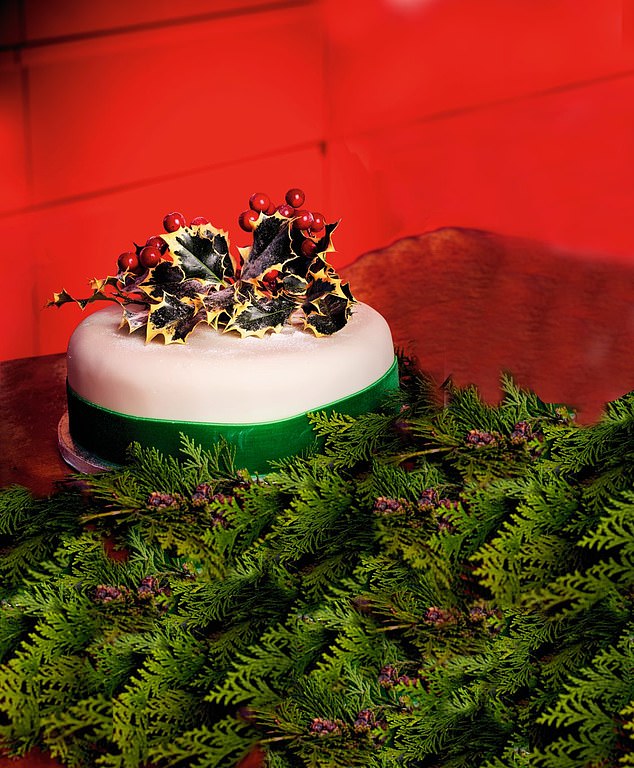 This is Christmas cake for people who don’t like solid, dark, fruit cake and it can be made ahead and stored, un-iced, wrapped in parchment and in a tin or an airtight container. 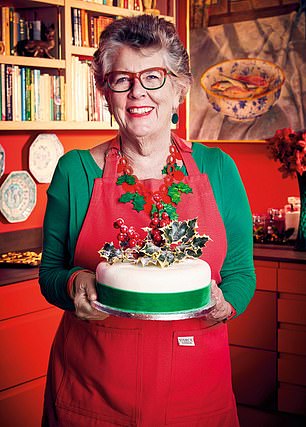 In a big bowl, soak the fruit, nuts and spices in the juice (plus rind) and Drambuie for a few hours or overnight. Sift the flour and baking powder together. Preheat the oven to 150°C/fan 130°C/gas 2.

Line the base and sides of a 25cm round cake tin with baking parchment. Wrap the sides of the cake tin on the outside with a long strip of folded newspaper and tie it around with string – this is to prevent the cake edges getting overcooked before the middle is done.

Then stand the tin on a baking tray lined with more newspaper.

With an electric whisk or in a food processor, cream the butter and sugar till light and soft. Add the eggs, beating in one at a time, with a dessertspoon of the flour between each addition.

Stir the egg mix into the soaked fruit and mix well. Fold in the rest of the flour. Tip into the tin, and smooth the top flat.

Put folded newspaper lightly over the cake and bake in the centre of a non-fan oven for 2¾-3¼ hours, or for 30 minutes less in a fan oven (I use a non-fan oven, as the fan tends to blow the newspaper off).

After 2½ hours, test with a skewer. If it comes out clean the cake is done. If not, test every 15-20 minutes. Let it cool to lukewarm then turn out on a wire rack and store until needed.

To serve, paint the cake with melted apricot jam, then cover with marzipan, then with fondant icing and decorate as you wish. 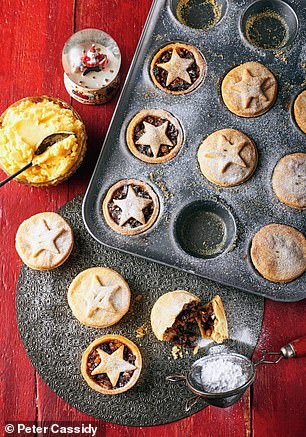 You can make and fill, but not cook, the pies and then bake them from frozen, giving them an extra five minutes in the oven.

Preheat the oven to 190°C/fan 170°C/gas 5. Divide the pastry in half and roll one half out thinly. Take a cutter with a diameter slightly wider than that of an 8-hole bun tin, and cut out 16 circles, to line 2 tins.

Roll out the remaining pastry and stamp out star shapes and place on top. You can also stamp out circles to cover the pies, if you wish.

Brush the tops with milk and bake for 20 minutes, until light golden brown. Cool slightly on a wire rack, and serve warm dusted with icing sugar.

You can keep this in the fridge for a fortnight, or freeze in an airtight container for 6 months.

Grate the apple and chop the pear. Melt the butter and add it, with the remaining ingredients, to the apple and pear. Mix well, cool, and spoon into a sterilised jar.